Impressions of the Ruger LCR

OK, I know that the next review is supposed to be the Glock Model 36...and it will be. This is just kind of a "first look" informational piece. Yesterday I ventured over to the gun shop/range while I was waiting on my daughter to finish her sign language translation gig at a breast cancer awareness gathering. While loitering about the shop I spied a Ruger LCR in the range rental case. I was surprised that they would put such a hard to find handgun in the rental area but decided that it was devine provenance and there was a higher power that wanted me to put a box of bullets through the revolver and report back on my impressions. So here we go:

I did not have an opportunity to photograph the LCR so we will use this appropriated photo from Ruger's web site: 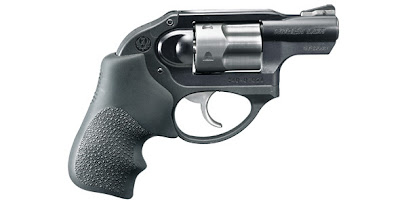 The 13.3 ounce LCR is obviously designed to take a bite out of the market share that Smith & Wesson has established with the scandium “J” frame models that have become so popular; so that was the benchmark to which I compared the LCR. At first blush the LCR felt much better in my hand than most of the stock S&W “J” frame revolvers. This is primarily due to the very well designed Hogue “Tamer” grip that comes standard on the LCR. Unfortunately, while the “Tamer” grip feels good and assists with controllability it is so large that it can be a hindrance to your ability to conceal the handgun in a pocket holster. The big advantage of these lightweight revolvers is the ability to slide them into the pocket holster of your choice, slip them in your pocket and go forth into the world. I am just afraid that the “Tamer” grip would print in your pocket and the tacky texture of the rubber material might catch and bind with your pocket material when you draw the revolver. If you are going to carry this revolver in some type of a belt holster then you are really not taking advantage of the light 13.3 ounce weight and go very easily with an all steel snub nose which would help dampen the recoil. Small revolvers are not easy to shoot well and the light weight models are absolutely no fun due to their heavy recoil. I am afraid that the challenge of grip versus concealability goes to Smith & Wesson. Their M&P model 340 is lightweight and the Crimson Trace laser grips are fairly flat making it very concealable in a pocket holster. The flat CT grips also make it surprisingly controllable. In the non-laser grip models S&W uses the Hogue boot grip which is still more concealable than the Hogue “Tamer” that Ruger is using. The fact that these grips are so large is really a shame since Ruger went to a lot of trouble to design a cylinder that is the smallest in the industry. If more concealable grips were on the market then the LCR would be a very good pocket revolver.

The stock Ruger sights are black on black fixed sights that are usable in shooting with good light, but no good in diminished lighting or complete darkness. S&W wins this one with the XS Dot night sights on the Model 340 M&P.

The trigger pull is much better than the pull on most S&W “J” frame revolvers. I don’t know how heavy the pull was as I did not have my gauge with me, but the pull was probably around 7 or 8 pounds as opposed to many of the small Smith’s I have recently tried with pulls in excess of 12 pounds. The pull was also smooth with no stacking (another rarity in small revolvers) and seemed to be a shorter pull than most S&W small revolvers. 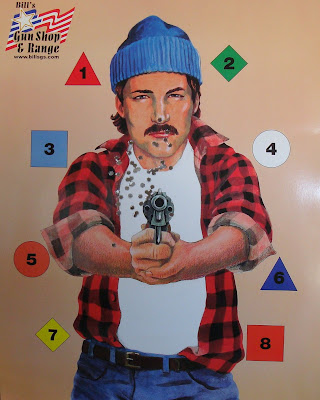 OK, it was sort of accurate. I only had time to put one box of bullets through the LCR and choose to send all of them through my favorite “Paul Rudd” target at 21 feet. My groups with my Smith M&P 340 are much tighter at this distance and have been since day one. Ammunition fired was MagTech 158 grain FMJ flat-nosed round which is generally pretty accurate in my M&P 340. The accuracy challenge goes to Smith & Wesson.

Lastly, the trigger guard bothered me. Now, this is not normally something to which I would even give a second thought but this trigger guard is large and kind of in the way. If it were smaller my hand might have gotten a higher grip on the revolver which would have resulted in better accuracy and handling.

The recoil caused by the heavy bullets did not really bother me at all however, I kept wondering how she would perform if it was a .357 magnum as many of the Smith & Wesson snub nosed revolvers are.

If you are dying to have an LCR it isn’t a bad choice and I’m sure with practice you can probably handle it very well. However I find my S&W model 340 is easier to shoot and shoot well. Also, my Kahr MK9 is even easier to shoot than either of the small revolvers and holds two additional rounds of 9mm ammunition. Also a fully charged spare magazine is easier to carry than a speed loader full of .38 special ammunition.

Good job, Joe. I especially like the fact that you picked the gun up as a spontaneous range rental and gave it a shakedown. Many first-time gun buyers don't know that they can check the rental-racks at the ranges and try many different guns before deciding on a purchase. Most let the gunnie clerk talk them into buying something they may not shoot well.

Joe,
Once again a very good report. I was actually considering one of these, but I think I'll wait.

Thanks for taking the time to write an unscheduled review!

Joe--tell me it aint' so--one box of "cheap" practice ammo does not do justice to this snub. The LCR shoots better than any airweight S&W that I've owned. You should have tried some +P, because you would have seen a huge difference in accuracy and felt recoil between the "smith" and the LCR. Also, it has been my experience (past six months) that the LCR carries very well in a uniform front pocket, the grips are not a problem, there a plus. I traded my 11 year old S&W 638 for the LCR--better gun, less weight--more accurate. By the way the American Riflemen (2009) did a 10,000 round torture test--LCR took a lickin' and kept on ticking.

"Cheap" practice ammo"...does such a thing exist? I never turn down a challenge that I can accomodate, so look for me to shoot the LCR again with as much different ammo as I have in my locker or can find at the range.

On a side note, is 415 your birthdate or is it LAPD code?

Hey Joe--took a while to get back at yah--the "415" is part of my adam number for LE purposes. I still have and enjoy my LCR--have you had time to re-evaluate it? It's still a great option, simple, rugged, well designed, great for concealment. So Joe take another look...

I have not. The range took their rental out of service and I am looking for the newer model in .357. I am saving a partial box of 158 grain +P wadcutter HP's as they are usually more accurate (but a pain to clean the lead out of the bore) that the 130 grain FMJ range ammo. I really like the Hogue grip on the Ruger and I am still looking for the near perfect small revolver that provides accuracy, lightweight, and reasonable controllability. I also want to shoot .357's out of it and if I like it...I'd buy it.