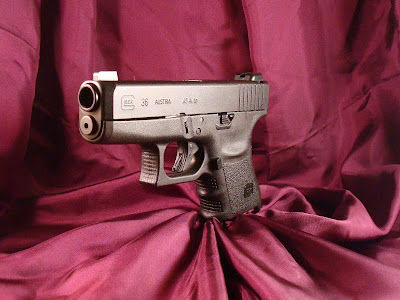 The G36 has one purpose in life; it is your cavalry, your Marine Corp, your personal life preserver or any other metaphor you can think of to imply that it is a great tool to have at your disposal when the chips are down and your back is against the wall.

The G36 is probably the most useful pistol in the world, certainly the most useful one manufactured by Glock and that is saying a lot. The one I’m examining today is the second one I’ve owned, the first being foolishly traded away for something I don’t have around anymore. I regretted it almost as soon as I let it get away.

What makes the G36 such an important handgun? Let’s run it down by the numbers:

1. It’s a .45 ACP. Some think its reputation as a defensive cartridge is vastly overblown but it served this country in WWI, WWII, Korea, Vietnam, and Gulf Wars I and II. It was discontinued from Military Service in the late 1980’s but elite units brought it back because it worked better than the government issued 9mm pistols and remember the military only uses hardball ammunition. If our armed forces were allowed to use hollow point ammo they would love the .45 even more. Regardless of how one feels about the .45’s reputation, one cannot discard its track record with the United States military.

2. Size. At 1.13 inches wide it is the thinnest pistol Glock manufacturers and thinner than its competitors. The small Taurus Millennium Pro in .45 ACP is 1.25 inches wide. The G36 is also the lightest Glock made and is lighter than the small .45s made by Springfield, Kimber, Para Ordnance, and Taurus. With a good tuckable inside-the-waistband holster the G36 can be with you all day.

4. Accuracy. The G36 is not an easy pistol to shoot nor is it difficult to master. The 5.5 pound standard Glock trigger provides a consistent trigger pull and learning to use the short reset of the trigger allows you to quickly fire follow-up shots. It is more accurate than a pistol of this size should be but you need to spend some time practicing with it in order to gain your own level of proficiency.

1. Capacity. The magazine holds only 6 rounds but with 1 in the chamber you get a total of 7 rounds of .45 ACP as opposed to 5 rounds of .38 special that has been the standard of personal protections for so many years. You can add the Pearce Plus One grip extender to add a round. If you do be advised that many people on the internet have reported problems with failure to feeds which they attribute to the fact that the Plus One grip extender makes the grip longer but uses the original magazine spring which is designed for the standard and shorter Glock magazine. I have added the Plus One extender to three G36 magazines and have not had this issue arise but enough people seem to think this to be a problem that I wanted to mention it.

2. The magazines do not drop free in a shooting environment. I realize that is a confusing statement so let me explain what I mean. When casually shooting the pistol at the public range the magazines drops freely from the grip frame as expected. However, when I took the G36 to the tactical class and was shooting and reloading while moving I found that they would not fall free because my grip was tighter and the bottom of my palm was making contact with the magazine due to the abbreviated grip frame. This was not a show stopper for me; it simply meant that I would use my free hand to rip the magazine out of the grip frame as the free hand was on the way down to get the next magazine from the waist pouch. The instructor pointed out to the rest of the class that this might happened to any pistol if we were wearing winter gloves while shooting.

The important part of any test is how she shot so let’s look at the targets: 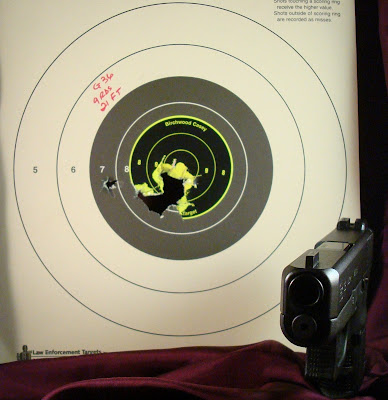 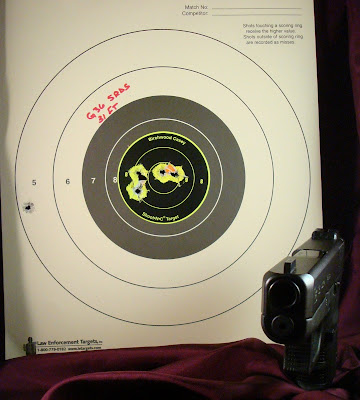 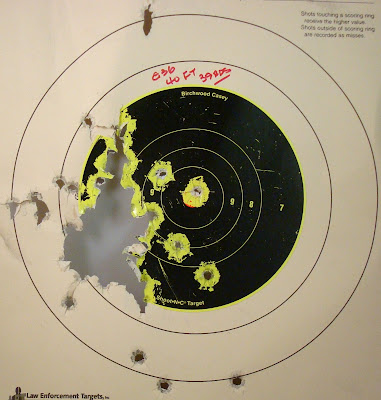 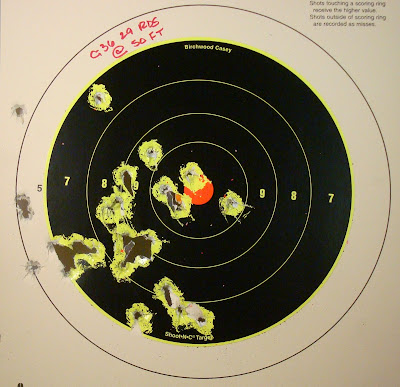 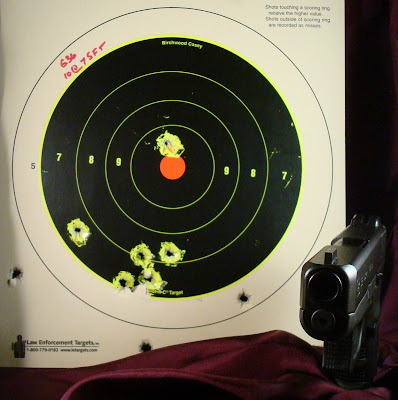 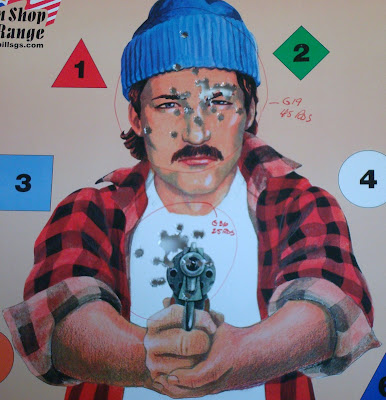 Moving backwards from 6 to 50 feet while shooting and carrying a bucket of brass in the weak hand and shooting with the strong hand only: 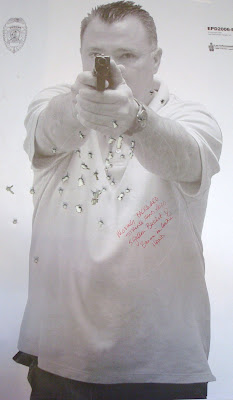 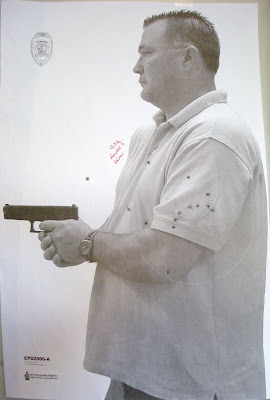 As with most Glocks I added two accessories to the pistol. The first were night sights and the second was the extended slide release. For me the night sights are a must, while the extended slide release is just nice to have. This pistol is a constant companion when I go out with a concealed weapon. As mentioned a few weeks ago in the “Importance of Training” post I prefer the DeSantis “Tuck This” holster as it is comfortable and has an attached pouch for one extra magazine. I carry the G36 with a magazine which has the Pearce “Plus None” grip extender. As is probably obvious, this extender is long enough to give you a better hold on the grip, but is not long enough to add any additional rounds of ammunition. I then carry a magazine with the “Plus One” extender on it for the spare magazine. This gives me a nice 14 round total capacity with the spare magazine. This should be enough to get me out of any unpleasant entanglement that has arisen.

So there you have it; the G36 is an easily concealable pistol with the brute strength to send any assailant quickly on their way. Did I mention it is a .45 ACP?

You thorough analysis and discussion makes me willing to give it a look see. I've never liked the "fit and feel" of the Glocks many of my LE buds swear by them though.
Regards,
Albert
The Rasch Outdoor Chronicles.
Ruger 10/22 Rotary Magazine Tutorial

"Did he mention it is a .45 ACP?" Love it.... Man wish I had the money to buy one right now...... I appreciate this and all Handgun Reviews you do Average JOE

This guy knows his stuff doesn't he! Just wish Joe would add an average retail cost.

At any rate, I've been looking for a new daily carry to replace my little LCP. Although I love the LCP, I am becoming more skeptical of stopping power of the .380. I've got a Wilson Combat ADP 9mm that will soon become my EDC.

yes this handgun is awsome average joe hit it on the head! it does take a good bit of practice but when you figure out how the gun fires you become a very lethal person and it is a .45 acp i dont know why that wasent mentioned in the post (sigh) great gun go get one the more people buy them the more goodies they will make for it.that is the only draw back i have found with the 36 is that it is hard to find good accessories for them.

Everyone says it is a .45 ACP. There is also the intimidation factor. Look at the business end. All .45s look big, but this little pistol looks simply scary. I have numerous .45s. two are commander size. But none look this wicked.

Mine went KaBoom. I was shooting new factory ammo. The gun was 2 months old. Glock was no help.