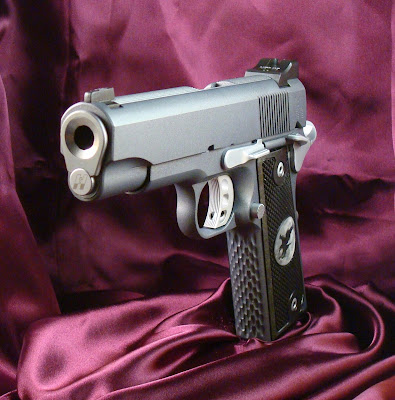 Well, back to 9mm pistols and in this two part series we will look at two really attractive offerings. The first, the NIGHTHAWK Lady Hawk is not a typical handgun for an Average Joe, but everybody deserves one custom, barbecue bragging, semi-safe queen, heirloom pistol and the venerable 1911 has been the platform for many such handguns. 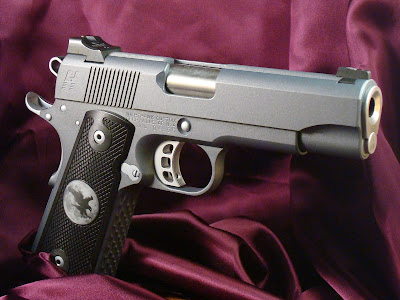 The Lady Hawk is NIGHTHAWK Custom’s flagship 9mm pistol produced in conjunction with Richard Heinie. Heinie custom pistols are very sought after and if you want Richard to build you one be prepared for a long, long, long, long, wait. In fact the wait list is frequently so long that Richard has to stop taking backorders until he gets caught up. When the Lady Hawk first debuted at the 2008 SHOT Show they advertised the pistol as a 1911 made for the female shooter. The Lady Hawk’s 9mm chambering offered less recoil than the .45 ACP and NIGHTHAWK Custom reduced the overall frame circumference, ala the Springfield EMP (Enhanced Micro Pistol), which made the pistol easier for smaller hands to handle. The reduced circumference and the shorter “Commander” length makes the Lady Hawk a nicely compact pistol. However, as frequently happens, the market runs over your supposed niche and a good nimble company changes direction and goes with the market. What NIGHTHAWK found at the SHOT show was a lot of men wanted one too but wanted one that didn’t have the moniker “Lady Hawk” inscribed on the slide. So NIGHTHAWK began offering to produce the pistol without the model name on the slide as an option. At current the pistol is produced without the model name at all and you have to actually put in a special order if you want the name “Lady Hawk” on it.
Here are the official specifications:
Height: 5 5/8"
Barrel Length: 4.25"
Mag Catch: Extended tactical
Weight: 2 lb. 4 oz.
Safeties: Tactical single-side or Ambi-safety available
Sights: Heinie Straight Eight
Finish: Titanium Blue
Action: Single action only 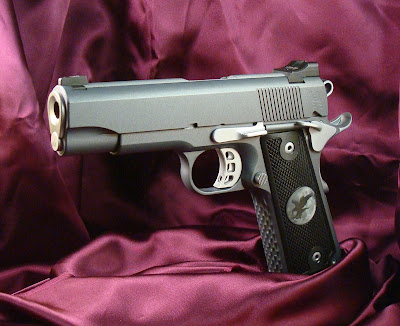 The first thing that strikes you about the Night Hawk is the stunning Titanium Blue finish with the hard chrome controls. The pistol is absolutely beautiful and I wish my photos could do this pistol justice. Richard Heinie’s influence is found all over the pistol. Most noticeable are the Heinie Straight Eight night sights which consist of two dots; a very bright one on the front sight and a more subdued one on the rear sight. 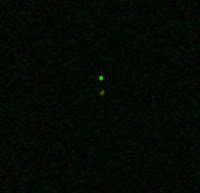 excellent combination as the brighter front sight naturally draws you eye to it which is exactly where you want your focus to be. Putting the bright dot on top of the subdued dot makes the figure 8 and means you are on target. I find this set up allows me to get on target very quickly. Heinie parts are also used for the magazine release, the hammer and sear and his signature scalloping is used on the front strap and mainspring house to enhance your grip on the pistol.
Additionally NIGHTHAWK contoured the magazine well and serrated the rear of the slide. These are not things I would necessarily order on a completely custom built pistol but they are nice touches to make inserting a magazine easier (which would undoubtedly be a blessing under stress) and break up any reflection that might be coming off the back of the slide and causing a disruption to your sight picture.
NIGHTHAWK also installs a match grade crowned and recessed barrel and they do an absolutely awesome job. 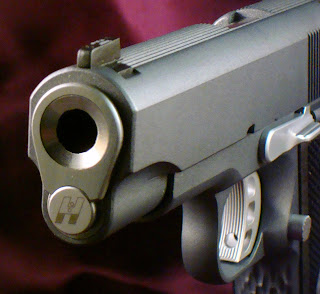 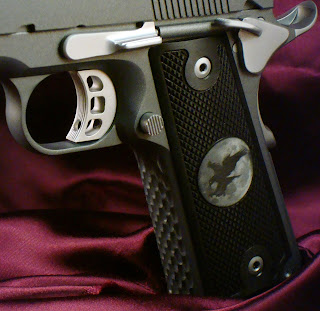 It is also worthy of noting what is not on this pistol. Not included is any ambidextrous triple-wide tactical-competition slide safety that seems to be all the rage on some pistols but only makes the handgun unnecessarily wider and runs of risk of bumping into something that might knock the safety off altogether. The safety is only on the left side of the slide and is wider than the safety on a standard 1911 but only so much so as to be easier to manipulate without getting in the way of anything. Also wisely not included is a full length guide rod which makes the pistol more difficult to field strip and has not been shown to improve accuracy or reliability.
The pistol runs like a precision engine and has experienced no malfunctions in the 700 plus rounds I have put through her. Unlike some expensive 1911’s no break-in period was required in order to get the Lady Hawk to function properly. Accuracy is also just exactly what you would expect, so let’s see some targets:
Here are some 21 foot targets: 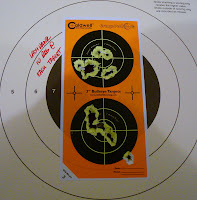 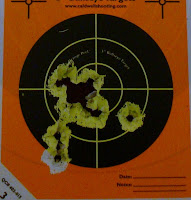 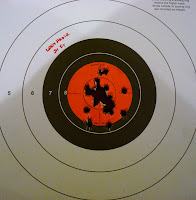 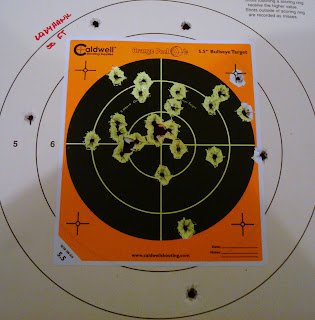 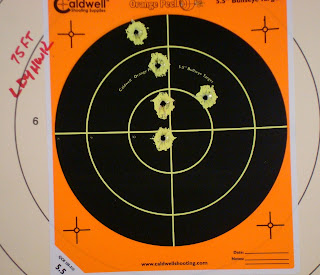 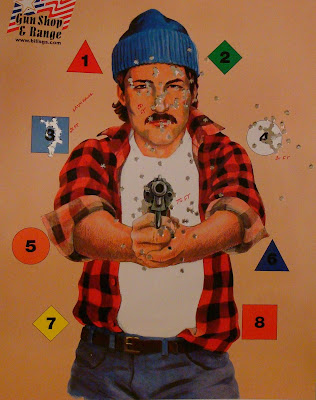 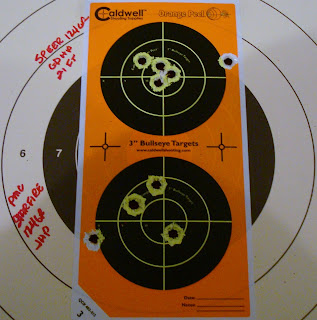 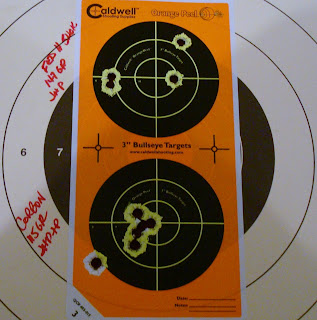 This is obviously one superb pistol and there really isn’t much more to say about it so I will leave you with a photo of the Lady Hawk with a Benchmade folding knife with a matching titanium blue handle. 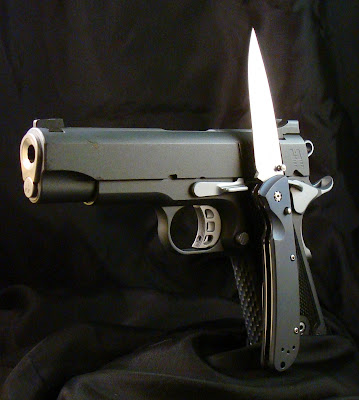