CZ 75B in Polished Stainless 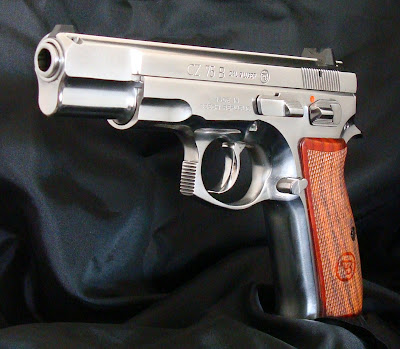 When I first spied this pistol in the case I said “Nice CZ, but I’m not interested in nickel”. It was then that the clerk behind the counter informed me that it was not nickel, but polished stainless. Polished to a mirror finish I might add (except on top of the slide). In the first installment of “Sexy 9mm’s” we examined the beautiful Night Hawk Ladyhawk pistol. It is a stunning execution of the custom gun maker’s art and it also sports a stunning price tag that is very un-average Joe like. The CZ 75 in polished stainless is a stunning execution of the production gun maker’s art for about a quarter of the price of the Ladyhawk. Both pistols run like well oiled machined and are very accurate. The CZ 75 is not quite as accurate as the Lady Hawk, but did you hear me say it’s a quarter of the price? The CZ 75 is definitely an Average Joe kind of handgun.
For reasons that I don’t clearly comprehend the CZ 75 has not been embraced by the American public or the law enforcement community. If you quiz most U.S. shooters on the best (non-polymer) 9mm handguns they will probably mention the Browning Hi-Power, SIG P226, or maybe even the Beretta 92; they just don’t consider the CZ to be a top tier pistol. I have owned 5 CZs, three Hi-Powers, and two SIG 229s and I can attest that the CZ 75 can easily stand shoulder to shoulder with the other big boys in the 9mm world. I’ve never met anyone who didn’t grasp the CZ 75 and remark about the comfortable ergonomic feel. The feel is similar to the Browning Hi-Power, except CZ’s grips are better. The barrel lock-up is similar to Hi-Power as well and unlike most all other semi-automatic pistols, the slide runs inside the frame—just like the vaunted SIG P210 which is considered by some to be the most accurate handgun in the world. 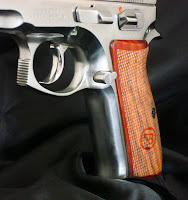 One of the first things I noticed was the fantastic cocobolo grips on the polished stainless 75. They are an orange/reddish color with a nicely figured striation of black accents running vertically down the grip. The execution of the checkering, the border, and the CZ logo are all first-rate for a production pistol. I was surprised to find that an extra set of CZ’s well made contoured rubber grips with their non-slip checkering were also included in the box. Upon disassembling the CZ I found that the polishing did not stop with the outside of the pistol. While not a mirror polish job, you will not find a tool mark on the inside of this handgun. Even my SIG pistols show tool marks on the inside of their slide. The attention to detail on the interior of the pistol pays off in the smooth running of the 75. There was no “hitch” in any portion of the slide movement, never a failure to feed, and a very smooth trigger pull in the double action mode.
For those not familiar with the CZ 75B’s operation it gives you several modes of action to choose from. First of all, it can be carried cocked and lock giving you a single action trigger for every pull. It can also be carried with the hammer down in the traditional double action mode giving you a long trigger pull on the first round and a single action pull on follow-up shots. In order to do this, after charging the pistol by racking the first round into the chamber, you must manually lower the hammer on the live round. This is not difficult to do, but does require your undivided attention, when doing so in order to make sure that some distraction does not result in an accidental discharge. After lowering the hammer you can also thumb it back to the half-cock position which will shorten the first double action pull just a little bit. If you feel that you will never need to carry the pistol cocked and locked then CZ also produces the 75 in the BD series which offers a decocker lever in place of the frame mounted safety. 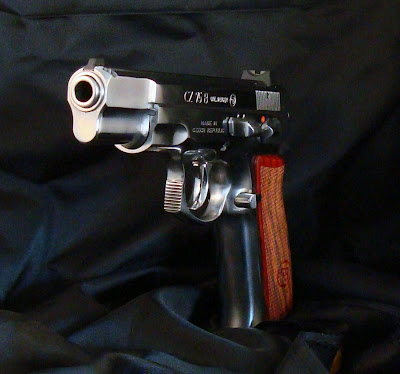 The sights on this CZ are the standard 3 dot variety these being of a pale yellow color instead of the usual white. They did not appear to be night sights and certainly did not offer any illumination when I checked them in my closed and extremely dark garage. I took the pistol the gun range’s tactical class and when shooting in the dark with only my flashlight for illumination the sights were dark as expected. However after holstering and drawing for the second time the sights showed 3 bright yellow dots. So, while not night sights in the modern sense, this CZ 75’s sights are capable of being charged by flashlight and giving you a much better sight picture. I also found that the sights go dim fairly quickly if not exposed to direct bright light. 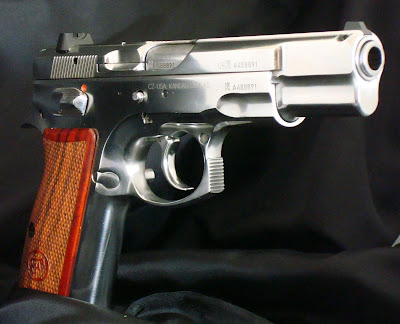 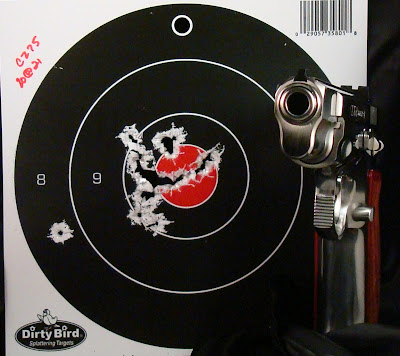 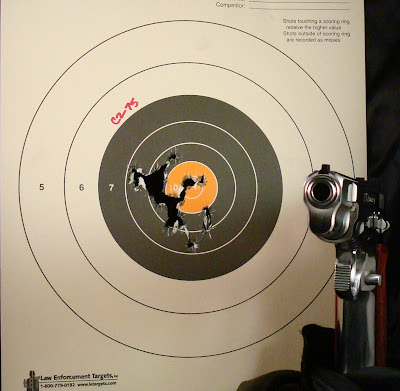 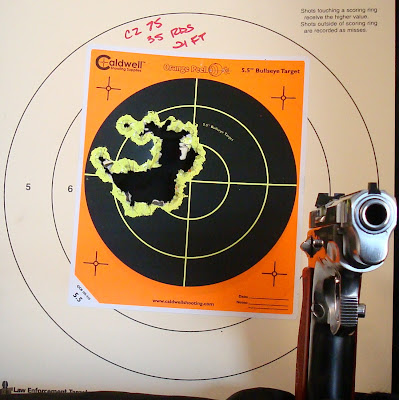 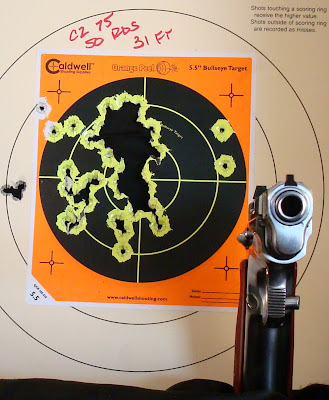 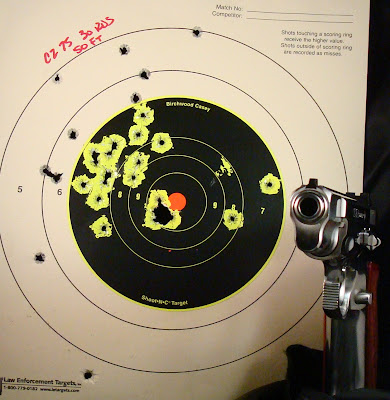 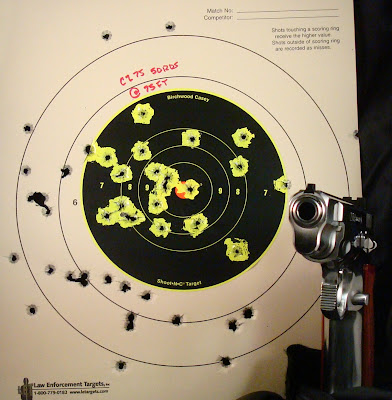 I’m afraid that I cannot tell you much more about this pistol. 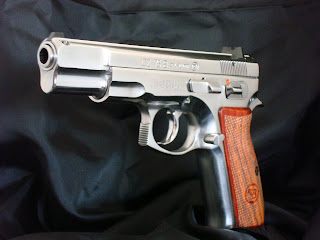 There is nothing in the manual that distinguishes this pistol from any other CZ 75 and the polished stainless model with cocobolo grips is not even listed on their website. But I can guarantee you that the CZ 75, in any configuration is a first class pistol and worthy of your consideration.