When I began this review four weeks ago I stated:

“We are going to look at four different carbines; one that is somewhat expensive but is probably what most people think of when they envision a carbine [and that was the M4 version of the AR platform by Bushmaster], one that is a little more reasonably priced and may surprise you as to its actual origin [the VZ 58 by CZ], one that harkens back to WWII [the Auto Ordnance updated version of the .30 Caliber M1 Carbine], and one that is very reasonably priced but lacks the speed and capacity of a military carbine. However what this last carbine trades off in terms of speed and capacity it makes up for in the accuracy department.”
And our last carbine reviewed is another CZ, the bolt action model 527 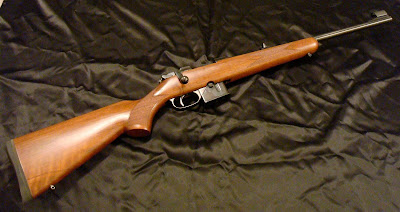 I will tell you right now I love this little carbine. The military clone carbines are great, but they are militray dull. The CZ 527 is a handsome little pug with a very nicely checkered walnut stock. It is light, short, well-balanced, easy to operate, easy to break down for cleaning, and accurate. It’s drawback from a defensive standpoint is its 5 + 1 capacity but that may also be its blessing in the gun restrictive era that we are entering. Its small 5 round magazine might make it Obama/Biden proof. I know that Obama said we can “celebrate our 2nd Amendment rights…”, but he doesn’t intend to. I hope you remember Biden’s speech where he said that “The next thing they’re [the republicans] are going to tell you is that Obama will take away your guns. Well he’d better not come after my Beretta shotguns.” Well Joe if those are high capacity semi-auto shotguns you might want to bury them in the backyard. And, I certainly hope you hold accountable all of your “change and hope” voting friends who told you that Obama would have too much to do with the war and the economy to come after your guns. They were wrong. The new President and his cadre of Congressional Democrats are making this a priority and wasting no time in getting started.
Obama ally, Congressman Bobby Rush from Chicago, has introduced an invasive registration bill that, if passed, would make complying with it almost impossible and will turn many honest gun owners into criminals…which is something that Congressman Rush knows all about since he served 6 months in jail for illegal possession of a firearm in 1969…a year after he went AWOL from the U.S. Army and became a co-founder of the Illinois Black Panthers. How can an Army deserter and convicted criminal can even run for Congress? For a sad laugh about this kind of thing go watch “The Guy from Boston” at: http://www.youtube.com/watch?v=y7o9p0fP6cQ (warning, there is some salty language).

If you wonder what Obama has in store for you second amendment you can find it on the White House web site: http://www.whitehouse.gov/agenda/urban_policy/
For your convenience, I have copied it below.
THE AGENDA • URBAN POLICY
Address Gun Violence in Cities: Obama and Biden would repeal the Tiahrt Amendment, which restricts the ability of local law enforcement to access important gun trace information, and give police officers across the nation the tools they need to solve gun crimes and fight the illegal arms trade. Obama and Biden also favor commonsense measures that respect the Second Amendment rights of gun owners, while keeping guns away from children and from criminals. They support closing the gun show loophole and making guns in this country childproof. They also support making the expired federal Assault Weapons Ban permanent.
Ah…the Federal Assault Weapons Ban. Such a complete waste of legislation that when it expired no one…no one in Congress even bothered to bring it up for re-instatement. The other seemingly innocent phrase that should make the hairs on the back of your neck stand up is “making guns in this country childproof”. This is another gun-grabber tactic; if they can’t get around the Second Amendment they’ll pose child safety restrictions that are impossible to comply with and demand built in safety devices that do not exist in order to dry up the firearms industry’s ability to sell their products to U.S. citizens.
Anyway, let’s get back to the CZ 527 Carbine.
This carbine in 7.62 X 39mm is a pretty good thumper. As mentioned in VZ-58 review its 124 grain bullet travels at 2700 Feet Per Second with 1600 foot pounds of energy. This cartridge has been successfully used against us since the Korean War. If you live in a more densely populated area you might want to consider the Magsafe ammunition. Magsafe produces specialty ammo that produces great shock and low penetration making it safer to use as it will not shoot through your target and will breakup upon striking sheetrock walls, etc. Magsafe makes a 7.62 X 39mm round with an 80 grain bullet moving at 2750 feet per second with 1343 foot pounds of energy.
The 527 is also an easy carbine to handle. With an 18.5 in barrel it brings the total length of the weapon to just an inch and a half longer than a yard and its weight of 5.9 pounds makes it just about as light as the .30 caliber M1 carbine and 1.4 pounds lighter than the VZ-58. Nothing can be easier to operate than the bolt action. 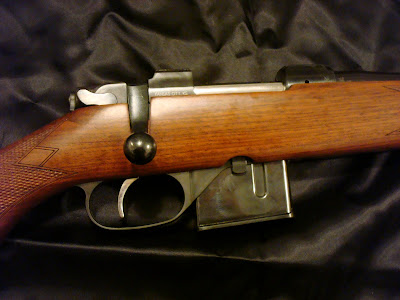 Yes, you lose the magazine capacity of the other carbines and the speed of their semi-automatic operation but the bolt action is reliable and not prone to jamming and, if it does, it is very easy to manipulate and even remove the bolt if needed to clear the jam. The ease of removing the bolt also makes the CZ 527 very simple and fast to break down and clean. With the modern semi-automatic military-type carbine the breakdown process leaves you with a work bench full of parts: an upper receiver, a lower receiver, a magazine, springs, a rod, a bolt, an extractor, a firing pin, and on and on and on. The CZ 527 field strips down to three components: the rifle, the bolt, and the magazine. 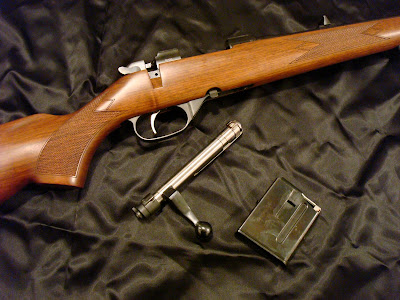 The 527 is also pretty darn accurate as the 5 round targets below show. All were fired at 25 yards. 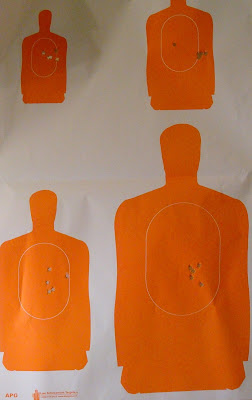 Although the receiver is dovetailed for scope mounts I like the robust fixed sights that she come with. The front post has a hood that protects it from incidental damage and the rear sight is perhaps the most visible and heavy duty stock rear sight I have ever seen on a bolt action rifle. 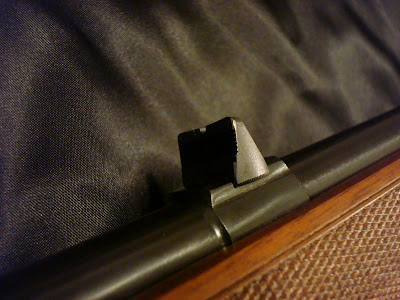 Lastly, the 527 is the least expensive of the quartet we have looked at with an MSRP of $727.00 as compared to the .30 caliber M1 Carbine at $860, the Vz-58 at $990, and the Bushmaster M4 clone at $1299.00. Due to the current political times that we have entered the prices on the high capacity magazine fed military clone carbines are climbing due to demand. The good news if you want a bolt action 527 is that they are available usually at a discounted price and I am seeing them on GunsAmerica.com and GunBroker.com going for $525.00 and $605.00 as well as the MSRP of $727.00. You may want to get one before everyone else realizes what a good idea and good value these carbines are.
There are many other carbines worthy of being reviewed and I don’t want to snub them; I just don’t have access to them currently. There are very fine lever actions in various price ranges from a few hundred dollars to a couple of thousand dollar and they are also available in a variety of calibers such as .357 Magnum, 44-40, 45 Colt, 44 Magnum, 30-30, all the way up to 45-70 and 500 Marlin.
In semi-automatic carbines there are the many variations of the Ruger Mini-14 usually found in .223, but also available in 7.62 X 39mm. Springfield makes several different versions of M14 carbines in 7.62mm (.308). From everything I have read, these are excellent firearms, however they are expensive.
For the budget conscience shooter (and who isn’t these days), there are many different makes and country of origin variants of the venerable AK-47 and its predecessor, the SKS all available in 7.62 X 39mm.
So, there you have it; if you feel that you need a carbine (and you know that you need at least one) you have many choices available to you. Good Luck on your search.