Carbines For Home Defense Part 2 of 4:

OK, I know what you are thinking: “Last week an AR, this week an AK-47”. I understand why you would think that, but you would be wrong. Although it fires the same ammo as the AK-47 it is not the same. It was actually patterned after a WWII German design.

When the Russia decided that Czechoslovakia should become a part of the Soviet Union the Czech’s begrudgingly went along but kept their own production of weapons and ammunition. When the Soviet’s demanded that the Warsaw Pact members standardize ammunition the Czech’s had no choice but to agree but still wanted to manufacture their own firearms. Anyone who has ever handled a CZ 75 or P-01 pistol, bolt action rifle, or shotgun, knows that they take a back seat to no one in terms of small arms manufacture.


Rather than re-creating the wheel, let me give you the history and specifications right from CZ’s website:


“The Sa vz. 58 was developed by Ing. Jiri Cermak in 1956 and 1957, adopted by the Czechoslovakian army in 1958. and was produced by Ceska Zbrojovka in Uhersky Brod, Czechoslovakia until 1983. Approximately one million Sa vz. 58 rifles were produced during it's 20 year production run. As of 2007, it is still the standard issue service rifle in both the Czech Republic and Slovakia.


The new Tactical and Military Sporter models are manufactured by combining original Sa vz. 58 components with a new semi-auto only milled receiver, a new trigger mechanism and new fire control parts.
While the appearance of the VZ 58 looks similar to the AK-47, it was inspired by the German StG 44 and initial development was actually based on the 7.92 x 33. Mechanically, the VZ 58 is completely different from the AK-47, and no parts including magazines are interchangeable.


Differences between the VZ 58 Sporter and the AK-47

I have seen several gun magazine write-ups on the VZ 58 and most of them say that the rifle is better made, more ergonomic, more reliable, and more accurate than the AK-47. I put that out there for reference but I am not necessarily confirming that statement because ergonomics can be a matter of personal preference and the quality of the AK-47 can differ depending upon who made it. The AK-47 is probably the most prolifically manufactured battle rifle in the world being manufactured in dozens of countries and countless factories both large production factories and small one-man shops in the northern tribal areas of Pakistan. I will go on record and say that the VZ-58 is a very well made rifle and the workmanship, fit and finish are better than any of the AK-47s I have ever handled. I shoot the VZ-58 perhaps the best of any of the carbines that will be examined in this series.

The VZ is another very fun carbine to shoot. All shots fired in the review were at a range of 75 feet with Wolf 7.62X39mm hollow point ammo.
This first target was shot during sight-in and it is odd that the smaller the silhouette the smaller the grouping. 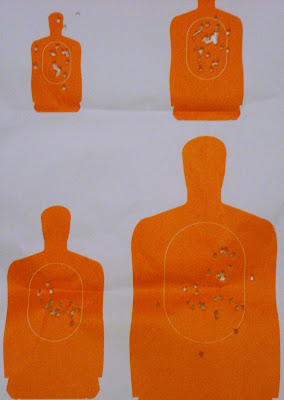 Once sighted in it was easy to hit these little 3 inch Birchwood Casey Shoot ‘N See targets at 75 feet. 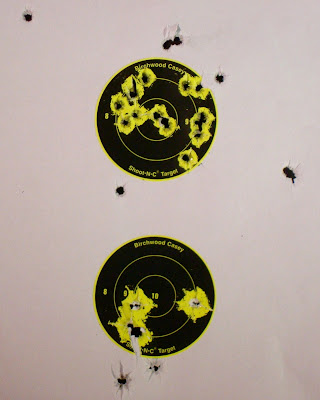 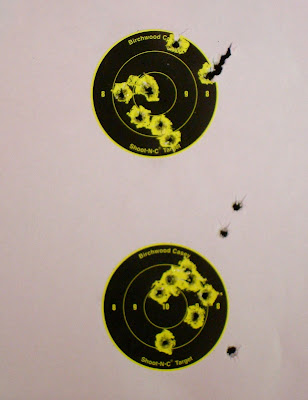 The VZ-58 is a well made carbine chambered for the 7.62X39mm bullet that has given the U.S. so much trouble from the Korea War to the Gulf conflicts and the War on Terror. The 7.62, in my opinion, is more effective than our Military 5.56mm cartridge. While the 7.62 124 grain round moves a little slower (about 2400 feet per second) compared to the 55 grain 5.56mm cartridge (about 2700 feet per second) the muzzle energy of the 7.62 is substantially greater at 1600 foot pounds of energy as opposed to the 1300 foot pounds of energy produced by the 5.56 round.


The VZ also sports a very intimidating appearance and if you can get over the fact that it looks like the rifle that the terrorists use you will have one very effective firearms on your hands.