I know that the title of this blog is Average Joe’s Handgun Review but I feel that everyone ought to have at least one carbine for the defense of their domicile so we’ll address that in a three part series regardless of the blog’s name.

A handgun is good and there are definitely times when a handgun is the only firearm that you might be able to carry but there are certain advantages to the carbine. Such as:

1. Accuracy. A carbine is easier to aim, steadier to hold, and has a longer barrel and sight radius all of which adds up to more accuracy, especially under stress and especially if a shot needs to be taken at a longer range than the average distance of most encounters.

2. Capacity. Most modern military clone carbines have a capacity of 30 rounds.

3. Power. The 16 inch barrel length of the carbine is going to provide a higher velocity than a 3 to 5 inch handgun barrel and most carbines are chambered for a more powerful cartridge than your average pistol or revolver.

4. Intimidation factor. A home invader or other criminal miscreant will be more intimidated by the sight of a carbine than they will a handgun. That means that you might be able to end the confrontation without firing a shot and that is always preferable to a shootout.

Now there are those who may say that a carbine is too powerful for home use and could easily over penetrate and mortally injure an innocent person, even if you squarely hit the bad guy. Well, yes…with standard full metal jacket ball ammunition that could happen but frangible ammo for most popular carbines calibers is available from Extreme Shok, Fiocchi, Mag Safe, and Winchester. There are also those who may say that the carbine is unwieldy inside your home and presents a temptation for the assailant to try to pull it away from you as the carbine extends too far away from the body. Not necessarily. Some time ago Thunder Ranch owner/operator Clint Smith examined this issue in a GUNS magazine article. In it Smith measured the distance from the butt stock to the muzzle when he had shouldered the carbine and compared that with the distance from shoulder to muzzle when holding a pistol in the isosceles stance. The distance was just about the same.

So who really needs a carbine? Well, let’s list them out:

1. If you live or have a vacation home in a rural area where the response to a 911 emergency call can take from 30 minutes to three hours then you need a carbine, perhaps 10 high capacity magazines and an ample supply (say, oh…900 rounds or so) of ammunition.

2. If you live in a suburban area where the response to a 911 emergency call can take from 10 to 30 minutes then you need a carbine and perhaps five high capacity magazines. In a worst case scenario if you had to keep us a continuous rate of fire for 15 minutes, how much ammo and how many magazines would that take?

3. If you live in an urban area which could fall prey to civil unrest for several days due to an extended power failure or natural disaster (hurricane, flood, earthquake, etc.) then you need a carbine and the same amount of ammo as in the rural scenario in point #1. There may be looting, rioting, and insufficient law enforcement for 72 hours.

I could also throw in a camping scenario but I figure that if you are a camper and a regular reader of this blog then you already have figured out what you need to protect yourself in the deep woods.

So if you have come to feel that you may need to have a carbine, read on!
We are going to look at four different carbines; one that is somewhat expensive but is probably what most people think of when they envision a carbine, one that is a little more reasonably priced and may surprise you as to its actual origin, one that harkens back to WWII, and one that is very reasonably priced but lacks the speed and capacity of a military carbine. However what this last carbine trades off in terms of speed and capacity it makes up for in the accuracy department.

We’ll start by looking at a military clone of an AR-M4 platform made by Bushmaster and is chambered for 5.56mm military ammunition or caliber .223 commercial loads.

After the presidential election these have become scarce as they have the 30 round detachable magazine and telescopic butt stock there were temporarily banned during the last time we endured a president from the Democratic Party. Somewhere there must be a high rate of murder committed by psychotic gang members who have bludgeoned people to death with detachable magazines and telescopic butt stocks because the liberal gun grabbers are scared to death of them.

Bushmaster’s version of the M4A3 carbine sports a detachable carry handle with fully adjustable front and rear sights calibrated for accurate fire from 300 to 600 meters. So…she should work just fine in the 25 yard indoor range (as I write this it is minus 17 degrees so outside shooting just ain’t going to happen unless I see Osama Bin Laden parachuting into our subdivision).

The carbine has a lightweight 14 inch barrel with a combined compensator/flash suppressor permanently attached to the muzzle bringing the total barrel length to the 16 inch legal minimum. Within the barrel both the bore and chamber are chromed line to protect and increase the longevity of the barrel, enhance reliability, and make clean-up easier.

As mentioned earlier the butt stock is telescopic and allegedly had six positions although I seem to need only two; fully extended for shooting and fully closed for ease of carry and storage. I guess those other four positions are there should I ever need them.

AR rifles have a reputation for accuracy and this little carbine can turn in a great performance as well. These military clones have a wide price range between $700 and $3,000 bucks so this is not a purchase to be entered into lightly. In doing some internet searching you can find the AR platform available from Colt, Smith & Wesson, Bushmaster, Rock River Arms, Saber Defense, DPMS, Les Baer, Wilson Combat, and a whole host of others. Even Canada’s Para Ordnance has opened a factory in the U.S. and is producing a good looking AR rifle under the name of their new division, Para USA. In researching the various internet forums and boards you can find all sorts of wannabe gun experts (and that includes me) that will happily give you their opinion about every firearm out there. The differentiating factor is that I have owned and shot every firearms posted on this blog several times (some for several years) before I have written about them. It is amazing to see the number of people on the internet who will tell you that a certain firearm that you are interested in is a complete POS and when you pin them down for specifics they eventually admit that they have never so much as even held the firearm. This is neither a commercial for me nor a condemnation of every person who pens an internet opinion merely a caution to make sure the person who is giving you advice actually has formed it through personal experience. The main reason I bring this up is that in researching whether or not to buy this Bushmaster carbine the internet gun gurus were pretty much split down the middle. What I began to see is that the people who were “Pro-Bushmaster” said things like “I love mine”, “Mine is very accurate”, “I’ve never had a problem with mine” while the group that was “Anti-Bushmaster” spouted advice like “They’re a piece of crap”, “You can do better than that”, and my favorite “I had a friend who had nothing but problems…”. The people who liked them actually spoke of owning and shooting the Bushmaster. The people who condemned them never spoke of currently owning one, previously owning one, trading one away, selling one, giving one away or even beating it into the proverbial plowshare. Along with that none of the disdainers mentioned any personal shooting experience either.

One of the advantages of a carbine over a rifle is that it is handier and easier to tote around. Of the three that we will be looking at over the next several weeks that certainly rings true with the Bushmaster M4A3 due to its telescopic stock. This baby is easy to carry and easy to get into action. The standard AR rifle weighs between 8.5 and 9 pounds while the carbine weighs 6.22 pounds. Those 6 plus pounds along with the low recoil of the 5.56mm ammunition makes the carbine easy to shoot and makes follow up shots fast and quick.

The adjustable sights on the Bushmaster were easy to regulate however I had a very difficult time seeing them in the in-hospitable indoor range lighting. Regardless, the Bushmaster turned in a pretty good 5.5 inch target at 75 feet as seen below. 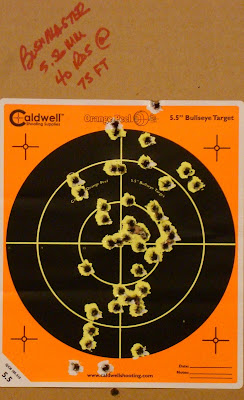 Not wanting to go through the eye muscle gymnastics that it took to get this group I decided to put an economical red dot sight on the carbine to make shooting a little more easier and pleasurable. In asking for a recommendation at the gun shop/range they pointed me to this little BSA optic which retailed for $79.00. 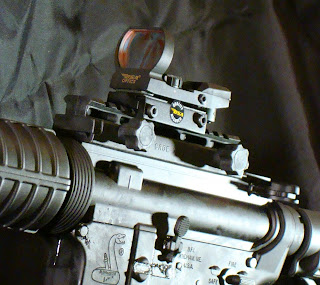 Installation was a breeze but sighting in was a little more problematic. They offered to laser bore sight it in for me which seemed to be a fairly simple process of affixing a laser pointer type device inside the barrel and zeroing the red dot on your optic to where the red dot from the laser bore optic is hitting down range. What I found by this experience is that the laser bore sight has to fit very snuggly in the barrel in order for the sighting process to be accurate. It apparently wasn’t tight and the BSA red dot optic was off. In the target below you will see some hits above the small orange silhouette in the upper left hand corner…I was aiming for center mass…of the silhouette below it. Therefore the three silhouettes you see are all a part of my manual sighting in process. 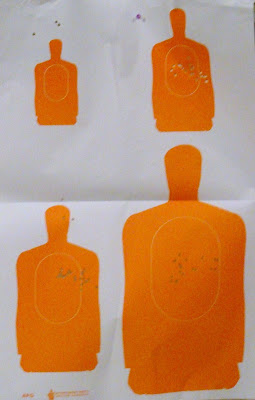 I know that these target are not easy to see and I will post some better one soon.

There is no doubt in my mind that I will continue to fine tune this little gem and get these groups tighter and tighter. The final word on the Bushmaster M4A3 is that it is one really fun little carbine to shoot, of course…that’s only my opinion.