Pocket Pistols Part III
In two early posting I examined quite a few pocket pistol (and revolvers) and will not duplicate anything here except to say that from my past two reviews I think the two standouts are the Smith & Wesson Model 340 M&P .357 Magnum with Crimson Trace Laser Grips and the now out of production Colt Government Model .380 ACP. Without getting into a detailed review, both combine ease of carry and accuracy.

The Walther THP, like the Colt Government .380, is long out of production being manufactured from 1986 to 2001. It has been called a scaled down Walther PP

but the THP was really a refinement of the Walther TP 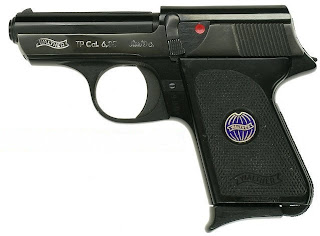 with its roots going all the way back to the Walther Model 1. 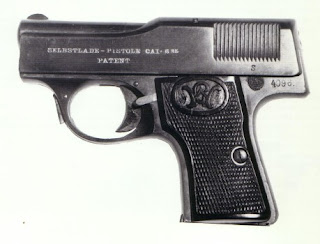 The THP was offered in two small calibers: the .25 ACP or the .22 LR and provided with two finishes. It was originally offered with a blued alloy frame with blued steel slide and was later manufactured with stainless steel with a high polish. The piece for our review is the stainless model in .22 Long Rifle. While the THP is no longer manufactured they do only occasionally show up in a used gun case or at a gun show. These little pistols, especially in stainless steel, are very well made and to me are akin to a gentlemen’s fashion accessory. 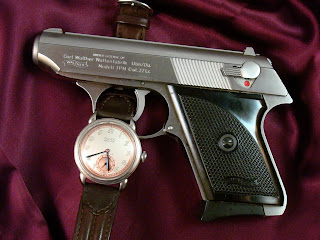 Make no mistake I do not advocate carrying a .22 LR for self defense. There is no gun scribe out there that I know of that would recommend a .22 as an adequate protector. However thousands of small pocket sized .22s have been sold by the like of Beretta, Taurus, and Phoenix Arms; let’s not forget North American Arms mini-revolvers which are single action. All of these pistols have been sold but they are not competition pistols or are they huntin’ handguns. So, while no one thinks a .22 is a viable self defense option, there are a lot of them being sold and carried and I am sure size and weight are the primary factor at work. The THP in stainless steel weights in at a scant 11.5 ounces, is 5.3 inches long with a 2.8 inch barrel, and is a scant .9 inches wide. It is small and comfortable to carry and….it is also accurate. 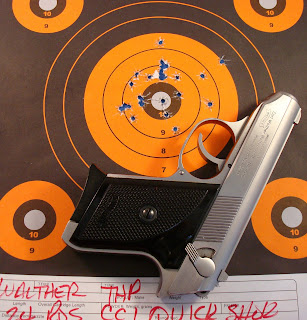 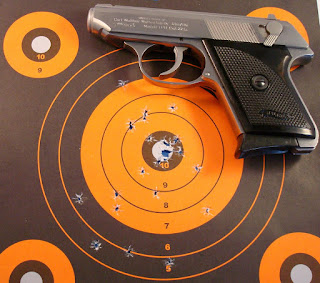 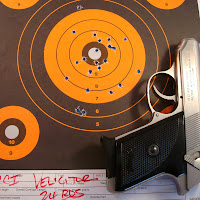 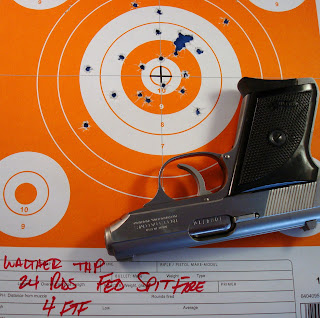 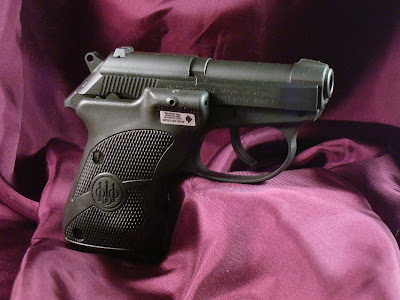 While the Walther THP is a scaled down from Walther’s .32 caliber PP, the Beretta Tomcat is scaled up from a long line of Beretta pocket .22’s with names and models such as the model 950 Jetfire and the currently manufactured model 21 Bobcat. The .32 Caliber Tomcat has been manufactured since 1996 and is available in stainless steel or matte blue. The model we are examining here is the blued model with Crimson Trace laser grips.


The hallmark Beretta attributes are easily identified on this pistol; the exposed hammer and the open slide. Also, like their small .22’s, .25’s and one version of their .380 the Tomcat comes with their tip-up barrel. To load the Tomcat you insert a full magazine into the grip and then press down on the barrel release lever on the left side of the frame and “viola” the barrel pops up to allow you the place one round in the chamber. This is a fantastic feature for anyone with arthritis or other condition that causes limited hand strength and makes racking a slide difficult.

The Tomcat hold 7+1 rounds of .32 ACP ammunition and, if you feel that a .32 is too weak of a cartridge there are a couple of faster options for you to consider. Corbon offers a 60 grain jacketed hollowpoint cartridge that is clocked at 1,000 feet per second with 133 foot pounds of energy. If you are afraid that the hollowpoint won’t reliably expand at 1,000 fps, then Sellier and Belliot offer a 70 grain full metal jacketed round that moves at 1,043 feet per second providing 175 foot pounds of energy. The latter round should at least provide the penetration to reach a vital organ. If you aim between the second and third shirt button you should be OK.

The Tomcat is just 5 inches long with a 2.4 inch barrel and weighs just 14.5 ounces. As I mentioned earlier the model tested came with Crimson Trace laser grips and there are pros and cons with this set-up. The con is the width of the grips. The little pistol is .93 inches wide at the slide but the CT grips expand the width at the grips to 1.3 inches. This doesn’t sound like much but it is noticeable in the pocket. The pros to this set up are that the grips are nicely contoured and fit my hand very well. Many times a pocket pistol swims around in my hand during recoil because it is too small to provide much to hold onto. The CT grips fill all the gaps in my hand. While I found that the Tomcat was sufficiently accurate with the small fixed sights the laser grips provide three advantages. First, they are a great training tool. The red laser dot showing on your target gives you immediate visual feedback on how much you are moving the muzzle during your trigger pull. Secondly, the laser grips will give you a greater advantage in low light or darkened conditions when the fixed sights cannot be seen. Lastly, there is an intimidation factor provided by the laser grips. The bad guy can see that you have locked on target and that alone may provide enough deterrence so that you won’t have to fire.

As I mentioned, the Tomcat has more than enough accuracy at 21 feet to do the job. 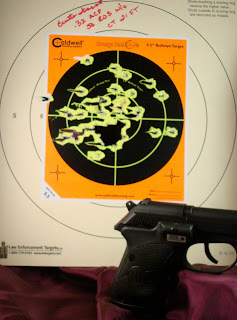 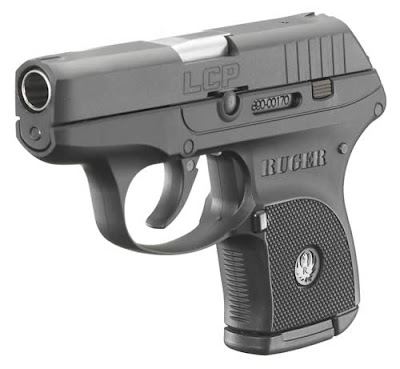 Ruger introduced the .380 caliber LCP at last year’s Shot Show and ever since then Ruger has not been able to keep up with the demand for the little pistol. There have been many subsequent reviews raving about the LCP and this is going to be another one. However, of all the reviews I have read only one has addressed the obvious fact that the LCP is a copy, abet a very good one, of the Kel Tec P3AT pistol. 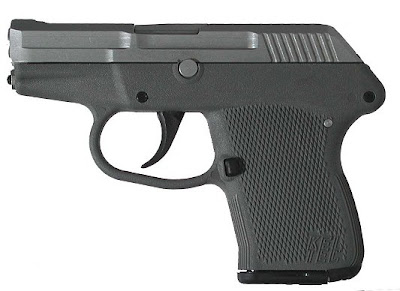 Having handled and fired both I will say that the Ruger is the better made of the two polymer framed handguns. The Kel Tec is more than accurate enough for its intended purpose; however it is a little roughly made. Although it was not necessary with mine, many people find that their Kel Tec pistol needs to have a “fluff and buff” job to make it reliable.
The LCP with its 8 pound trigger pull is much smoother than the Kel Tec and did not cause my knuckle to bust into the trigger guard during firing nor did its trigger did not bite and draw blood from my trigger finger. The LCP is 5.16 inches long with a 2.75 inch barrel, weighs 9.4 ounces and is less than an inch wide.
The .380 is considered by most gun writers to be on the fringe of acceptable power for a self defense pistol although some high performance ammo is available from Cor Bon. The Glaser Safety Slug, now marketed by Cor Bon, provides a 70 grain projectile moving at 1,350 feet per second with 283 foot pounds of energy. The problem with these hyper-velocity specialty rounds is that they usually shoot low for me and they are extremely expensive usually ranging somewhere from $16 to $20 for a package of 6 rounds. This is not conducive to encouraging much practice with your carry ammo. Cor Bon also markets the Powerball which moves at 1250 feet per second giving 248 foot pounds of energy and is a more viable alternative to the Glaser Safety Slug. As can be seen below accuracy is more than acceptable, especially since the pistol has almost non-existant sights. 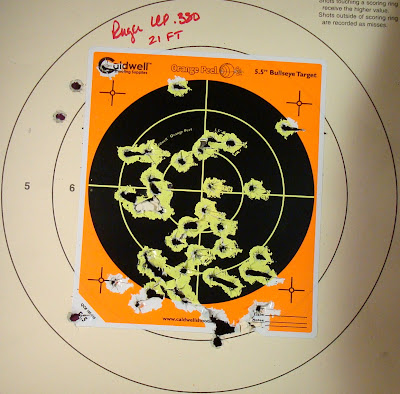 Right now my choice of the three pistols is the Beretta Tomcat with the S&B ammo. The weather is turning cold, people are wearing more layers and more penetration is needed. If you are in the market for a pocket pistol take a look at the Beretta Tomcat, you’ll be impressed with the quality of this little pistol.
Posted by Average Joe's Handgun Reviews at 7:06 PM