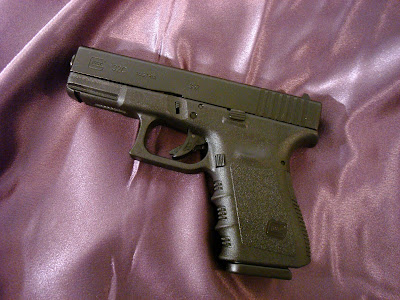 The purpose of today’s handgun review is to try to bring my new friend, Ole Doc Wesson, into the 20th Century. Anyone who regularly listens to us banter on The Shot Show pod cast will know that Doc’s carry piece of choice is the Smith & Wesson model 686 revolver in .357 Magnum which, while OK is dated technology. The dawn of the 20th Century rose with semi-automatic pistols nearing perfection. Self loaders were being designed in the late 1800’s and Colt hit pay dirt in 1903 with the John Browning designed Model M Pocket Hammerless. Over a 50 year period 572,215 were made in .32 ACP, 138,010 were made in .380 ACP and 420,705 were manufactured in .25 ACP. It is a pity that they were only manufactured in such puny calibers since these may well be the best pistols Colt every produced. A few scant years later Colt brought out another Browning masterpiece; the model 1911 in .45 ACP which has been probably the most popular semi-automatic pistol every produced as its continuous production is approaching the century mark.


The 1980’s brought us the proliferation of the 9mm and the 1990’s ushered in the newly popular .40 S&W cartridge. But despite the fact most police departments and military units all over the world have switched to a semi-automatic pistol Doc is still carryin’ a wheel gun.
Although we haven’t spoken about this, one of the reasons for Doc’s reluctance to take up a self-loader may be stopping power. When police agencies opted for a 9mm or a .40 caliber handgun most officers liked the increased capacity of a magazine fed pistol but many of the old timer’s lamented the fact that neither of the semi-auto calibers packed the aggression ending punch of the .357 Magnum. The standard load was a 125 grain semi-jacketed hollowpoint and today’s ballistics charts show, depending on manufacturer, that the 125 grain pill will smoke along between 1220 to 1500 feet per second resulting in somewhere between 413 and 624 foot pounds of energy. Yessiree, people shot with one .357 Magnum round went down and tended to stay down.


But Doc, there’s no longer any reason to stay with the six gun. Since 1994 the ammunition manufacturers have covered your needs with the .357 SIG cartridge. SIG partnered with the Federal Cartridge company to provide police officers with a semi-auto pistol round that gave them the same performance as their magnum revolvers by putting a 9mm bullet in similar weights to the revolver cartridge into a necked down .40 caliber casing so that they could give it some more power. With a 125 grain bullet the .357 SIG zips along at a rate between 1350 and 1375 feet per second with a muzzle energy between 500 and 525 foot pounds. If you want a little more sizzle you can slip in a 100 grain CorBon Powerball which smokes out of the barrel at 1600 feet per second with 568 foot pounds of energy. But first, a word of caution; the .357 SIG pistol only fires the .357 SIG or .357 semi-auto Cartridge; unlike the .357 Magnum revolver you cannot put a .38 caliber round into the .357 semi-auto pistol, not even a .38 Super cartridge. Similarly you should not try to stuff a .40 or 9mm in either and, if you handload, do not try to neck down .40 caliber casings to the 9mm. While the .357 SIG casing is .40 caliber in diameter, the walls of the .357 SIG casing have been thickened to handled the extra pressure required to replicate the performance of the .357 Magnum revolver round. And if Doc’s concern is the reliability of semi-automatic pistols then worry no more; this bottlenecked cartridge feeds easily and, along with the Glock, is produced by other primo manufacturers like…well, SIG. Both Glock and SIG have built their reputation on reliability and with an easy feeding round like the .357 SIG there is absolutely no need for concern. 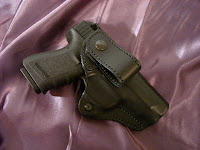 Glock model 32 C, the “C” designating that it has a compensated barrel.
First, let’s compare physical characteristics between the 686 and the 32C. The Glock 32C is the mid-sized Glock frame which some people mistakenly call the Commander length in reference to Colt mid-sized Commander semi-automatic pistol. However, the Glock mid-sized frame is shorter than the Colt Commander and with its 4 inch barrel the Glock is over a half inch shorter than the S&W 686 in its 2.5 inch barreled configuration. The Glock also weighs 13 and a half ounces less than the 686 and holds 13 + 1 rounds of ammo which is about double what the amount of cartridges held of the S&W wheel gun.
The Glock sports a 5.5 pound trigger pull which is consistently the same for each tug on the trigger and, unless Doc’s revolver has been tuned, the 5.5 pound trigger pull of the Glock is substantially less than the pull of the stock 686. But if the 5.5 pound trigger pull is not light enough for you it is easily changed. One of the nice features about Glock is that they are easily customizable with a lot of drop in parts and you can go online to Lone Wolf Distributors or the Glock Store or any numbers of websites that offer custom change-out parts including trigger connectors of various weights. To me the 5.5 pound trigger is just fine and the only part replacing I do with Glocks is add an extended slide stop and some type of night sight; on the 32C I have Tru Glo tritium fiber optic inserts with a green insert in the front sight and two yellow inserts on the rear.
The Glock .357 has less felt recoil and is eminently more shootable than a .357 revolver due to the more energy efficient design of a semi-auto pistol as compared to a magnum loaded revolver.

A lot of the recoil energy is expended in the retraction of the slide and the G32C has a compensated barrel which helps control excess muzzle flip while releasing more of the gases and recoil energy. The polymer frame also flexes with each shot providing the shooter with a little shock absorption.


Now, one of the hallmarks of the .357 Magnum revolver along with power, is accuracy. The good news is that the .357 SIG also provides excellent accuracy. This cartridge shoots with a very flat trajectory and at 21 feet with economy range ammo the 32C eats a nice whole in the center of the target. Move up to the more powerful defensive ammo and you get a little more of the .357 SIG “smart” recoil but you still get the same accuracy as you get with the lowered powered FMJ range ammo. The Remington 125 grain semi-jacketed .357 Magnum hollowpoint ammo set the standard for the police revolvers and Remington also makes a 125 grain hollowpoint for the .357 SIG. Just as Remington did with the revolver ammo, they have also done with the semi-auto ammo; it is accurate and very powerful skipping along at 1350 feet with 506 foot pounds of energy. Moving out to 50 the pistol put 15 rounds inside a 5.5 inche circle with 12 of the 15 in a circle of about 3 inches. At 75 feet the .357 SIG Glock pistol put 25 of 30 rounds inside the 10 ring of a 13 inch Birchwood Casey Shoot ‘N See target. 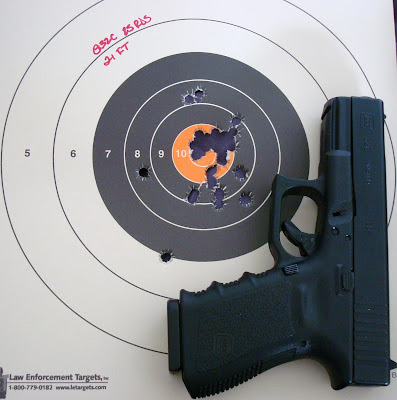 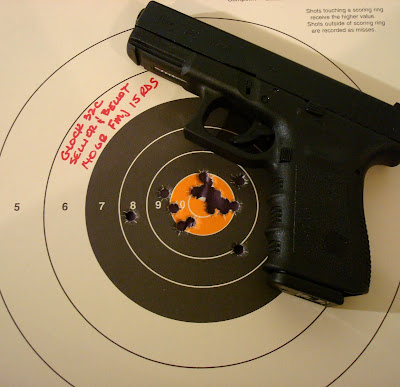 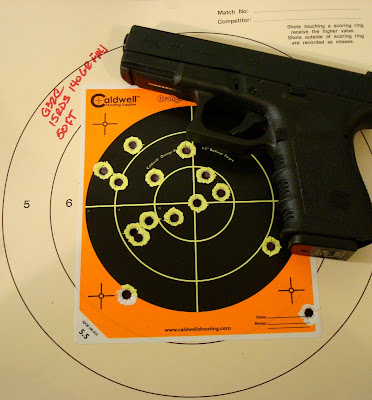 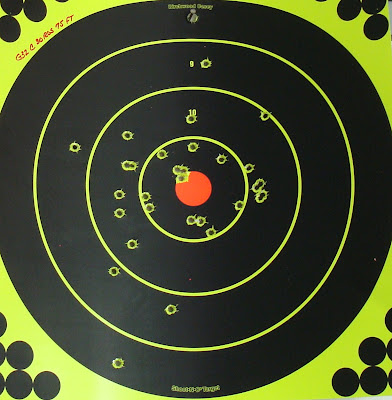 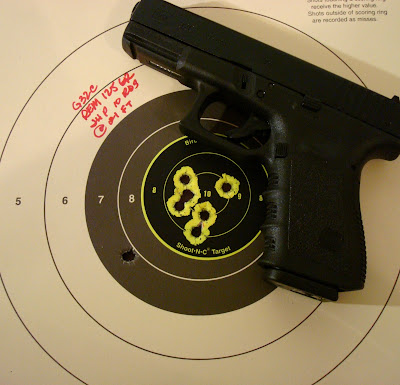 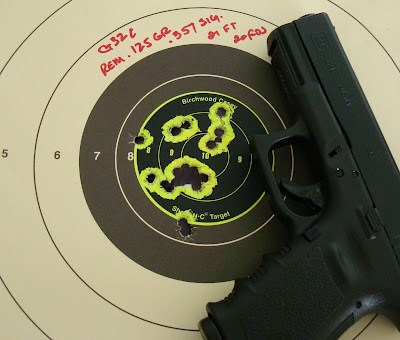 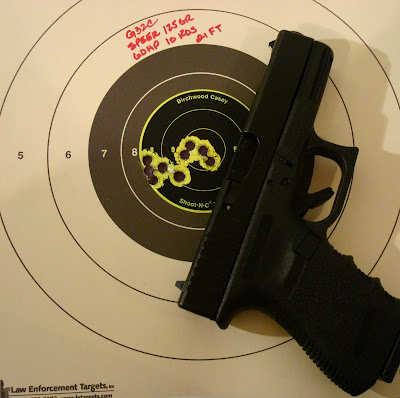 So Doc, the 32C carries double the ammo, is smaller, significantly lighter, and easier to shoot than your S&W Model 686, what’s not to like?
Posted by Average Joe's Handgun Reviews at 4:39 PM