Smith & Wesson Model 325 Night Guard
Smith & Wesson is nothing if not a prolific manufacturer of handguns. Every year they introduce new designs and refinements of older one. 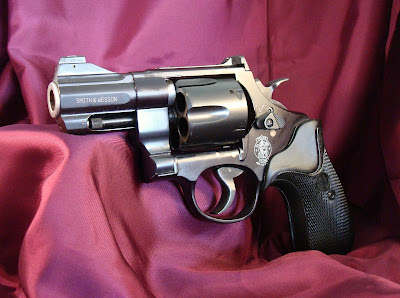 One of their new lines for 2008 is the Night Guard series of double action revolvers. They are matte black Scandium framed revolvers with 2.5 inch barrels and feature XS Standard Dot tritium night sights up front, a Cylinder & Slide Extreme Duty rear sight, and Pachmayr Compac Custom Grips. The Night Guard handguns come chambered in .38 Special, .357 Magnum, .44 Special, .45 ACP, and .44 Magnum. The .44 Mag, .45 ACP, .44 Special, and the 8 round .357 Magnum are built on the large “N” frame. The seven round .357 is manufactured on the “L” frame and the .38 Special, model 315, is presumably made on the “K” frame although I cannot confirm it since all literature just says it is made on the medium frame which is commonly defined as either the “L” or “K” frame. I am assuming it is the “K” frame as the model 315 is only chambered for six rounds and an “L” frame could easily hold seven.
I was interested in finding either the model 315 in .38 Special or the 325 in .45 ACP. The 315 because it is made on the smaller medium (hopefully “K”) frame and I knew that shooting .38 specials out of the Scandium framed revolver would be fairly comfortable to do. I was looking for the .45 for two reasons: 1. I am a fan of the .45 ACP cartridge and, 2. with the rising costs of ammunition there are still some occasional sales to be found for .45 ACP ammo. The other revolvers in the series, the two .357s, the .44 Special, and .44 Magnum did not interest me as the rounds would be too punishing for the light weight Scandium handgun and the ammunition would be too expensive to shoot much anyway.
There is a lot to like in the Night Guard Series:
1. The Pachmayr compact grips are some of my favorite when it comes to the compromise of recoil absorption versus low profile for concealment.
2. The front of the cylinder is nicely beveled to assist with holstering the weapon.
3. The model 325 specimen I picked up has perhaps one of the best trigger pulls I have ever experienced on a Smith & Wesson revolver. It is very smooth and light (their attorneys must have missed this one).
4. The XS front night sight is perhaps the best on the market and I feel that a night sight is absolutely essential on a self defense handgun (especially one marketed under the name of “Night Guard”).
5. The Cylinder and Slide fixed rear sight is perhaps the best fixed rear sight I have ever seen on a revolver. I wish all of my fixed sight revolvers had this rear sight. It is simple in its design but very effective in its execution. It’s one of those things that make you sad that you did not think of it first. The fixed rear sight on most revolvers harken back to the early days of the six gun and is usually just a notch dug out of the frame. However, the fixed rear sight on most semi-automatic pistols is usually a freestanding sight manufactured expressly for the pistol and attached to the rear of the slide via dovetailing or a hex screw (or both). The semi-automatic sight offers the shooter a more pronounced sight picture and that is sort of what Bill Laughridge designed when he came up with the Cylinder & Slide Extreme Duty rear sight. Again, borrowing from the fixed sights on the semi-autos Bill contoured and rounded the extreme duty rear sight so that it would not snag on clothing, catch on seat belts, etc. This is an excellent accessory.
Shots Fired
The first target was shot primarily single action at a range of 21 feet. I began by shooting double action and was throwing the shots so I slowed down, fired single action, and the group improved. 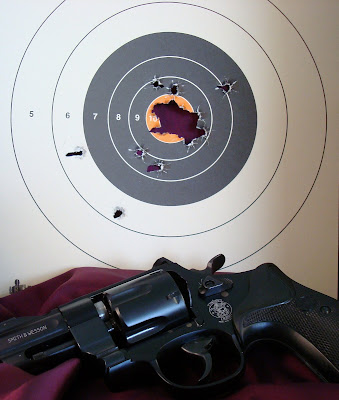 After putting 25 rounds into the first target I tried putting 25 double action shots into another target placed at 21 feet. This time the grouping, while still large was better. 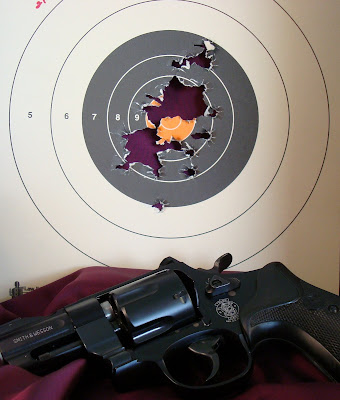 At this point you may have noticed that there are only two targets shown and both shot with hardball ammo from 21 feet. You may be thinking that normally I shoot more than this for a handgun review and I do. The reason I did not shoot more is that, despite all of the good features on this revolver, I do not like it. There are several reasons why; the first ones are somewhat petty and could be over looked but the last one is a deal breaker for me. Here’s what I don’t like:
1. The revolver can only be fired using full or half-moon clips. Now that’s kind of a given on a revolver firing a rimless cartridge originally designed to function in the spring loaded magazine of a semi-automatic pistol, but I have two .45 ACP model 22’s (a 4 incher and a 5.5 incher) and both will fire without the use of the moon clips and will usually eject them until the chambers become dirty. The moon clips are certainly essential when employing this revolver for defensive purposes. They speed the reloading process and enable the positive extraction of the fired casings. However, for casual shooting they are a pain in the neck. The fired casings required the use of a special tool (or needle-nosed pliers) to pull them out of the clips and it rapidly becomes a slow and clumsy process. The 325 comes packed with two sets of half-moon clips. That right, one set for the cylinder and one set as a reload. For Pete’s sake, the revolver has an MSRP of over a grand and all they can do is include two sets of clips. How much can it possibly cost them to stamp these out, maybe a quarter. They should include at least five sets.
2. The reach to the trigger is too long. This is the large “N” frame revolver and the Pachmayr grips, which normally I like; cover the backstrap of the grip making the reach on the large frame even longer. I tried replacing the grips with three other sets I had on hand, two of which did not cover the backstrap but it was still uncomfortable. This is a problem for me as I tend to feel that the defensive handgun should feel like a normal extension of your hand, arm, and body.
3. For reasons that I cannot fathom, Smith & Wesson opted to install the plain black Extreme Duty rear sight, even though Cylinder & Slide offers them with two tritium night sight dots. To me, having the glow-in-the-dark dots on the rear sight is important so you can see that you have the proper sight alignment with the front sight. I cannot understand why they are not on this revolver since they are available.
4. Lastly, I just do not feel that a short barreled revolver, especially a Scandium framed one, is an effective platform for the .45 ACP cartridge. My semi-automatic .45s (1911s, SIG P220, Glock 36, and Taurus OSS, 24/7 or Millennium) all shoot the .45 ACP cartridge more accurately and with less felt recoil. While I am neither an engineer nor a physics professor I would guess that some of the recoil energy get expended during the retraction of the slide. The aforementioned semi-autos do feel like the extension of my hand, arm, or body. This big, squat “N” frame just does not balance well for me. My S&W model 22 and 22-17 .45s with four and five and a half inch barrels balance much better for me. It is certainly not the recoil of the Scandium frame that is a problem for me. My primary carry gun is Smith’s “J” framed 340 M&P stoked with Speer .357 Magnum 158 grain Jacketed Hollow points. The difference for me is that the 1 7/8” barrel is a better proportional fit to the size of the rest of the small “J” frame revolver.
I am very aware of the fact that Smith & Wesson’s Jerry Miculek routinely beats the pants off semi-auto users in competition with his S&W model 625 in .45 ACP. I know that he can reload faster with the moon clips and outshoot his competitors, but this review is about how the specific handgun worked for me, not Jerry.
I am disappointed with the personal outcome of this review but, and I want to make this clear, I do not necessarily blame Smith & Wesson. This revolver is what it is and does what it says it can do; it is just not the right fit for me. This is not an instance where the design or the execution does not work. It is merely a matter of it not working for me. Another shooter might find this handgun to be the cat’s meow.
Now, with all of that said I would still be interested in handling the .38 Special model 315. It is on the smaller frame so the reach would be better and the revolver is a proven platform for the .38 Special cartridge.