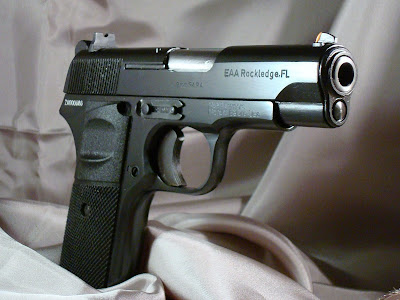 European American Arms (EAA) has begun importing pistols from Zastava firearms in Serbia; I’m sure you have seen their ads in the gun magazines more notable for “Heather” the leggy blonde model than for the firearms. 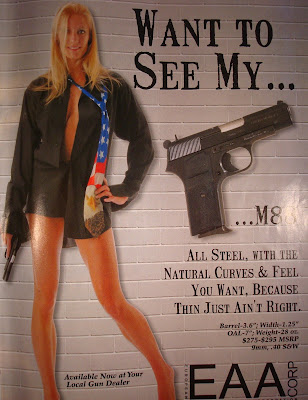 In the ads the Model 88 appears to be nothing more than a copy of the Russian Tokarev T-33, nothing to get excited about and I always spent more time gazing at Heather without giving the pistol any further thought. According to the 4th Edition of “Pistols of the World” Zastava was founded in 1900 with help from Fabrique Nationale of Belgium. In their 108 years of existence they have manufactured one revolver and six semi-automatic pistols. Three of the pistols were direct copies of the Tokarev and only two of the six pistols are still being manufactured; the Model 88 which I’ll call the “Baby Tokarev” and an economy-line copy of the classic SIG design.

Well when I entered the gun shop/range one Saturday for my weekly expenditure of copper, lead, and brass, the EAA-Zastava Model 88 was sitting atop the highest shelf in their freestanding display case. I was immediately struck by two things: the quality of the finish and how small the pistol was. To give you some idea of size, it is about as big and the Colt Pocket Hammerless model 1903 and 1908 models. 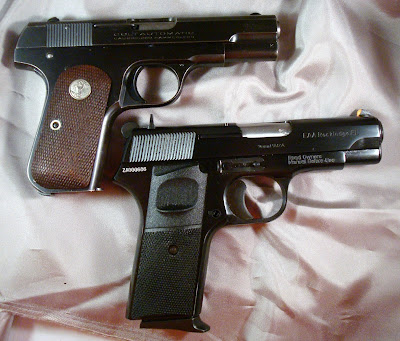 Interestingly enough the Browning-Colt designs were what the Russians were copying when they produced the Tokarev. It has the same barrel link as the Colt 1911 and the same barrel bushing as the first Model 1903 Pocket Hammerless pistols.
I had to stand on my tippy toes to see the price tag and was shocked to see that it was less than two and a half. I became recklessly curious to see if a $249.00 9mm pistol actually worked. The model 88 holds 8 + 1 rounds of 9mm, weighs 28 ounces, is 7 inches long with a three inch barrel, stands 6 inches tall and at the widest point, which is the grips, is 1.25 inches wide. The slide and grip frame width is .8 inches wide.
In handling the pistol a lot of what I saw and felt caused me to remind myself that it was only a $249.00 pistol, you can’t expect much. Two things that didn’t fit that expectation were the blacked finish, which was good for a $249.00 pistol (but not great) and the accuracy at 21 feet which, due to running out of ammo, was all I could shoot on that day. The handling qualities of the pistol were rather rough; for $249 you don’t expect a silky-smooth fit in terms of slide to frame and magazine extraction. This is a single action pistol that would be carried cocked and locked, however, the trigger pull is nothing like you are going to find on most other Single Actions. It is stiff; I don’t have a trigger pull gauge (yet) but I would guess that the pull is over 10 pounds. (Since that day I did acquire a Lyman trigger gauge and the pull measured 11.4 pounds and has since smoothed out to 10.2 pounds) There is a slight amount of take up before you engage the stiff pull. Actually I am not totally unhappy with this since I intend to carry this as soon as I am comfortable with its performance and all too often a light trigger pull becomes a nightmare in criminal or civil court; no one is going to accuse you of having a hair trigger on this pistol.
The sights have three dots on the barely utilitarian Tokarev type front blade and rear “u” notch. The three dots seem to be almost an afterthought; the front dot is so small I could not see it in indoor range lighting. I have since built up the front sight with some of my daughter’s hi-gloss mauve fingernail polish. 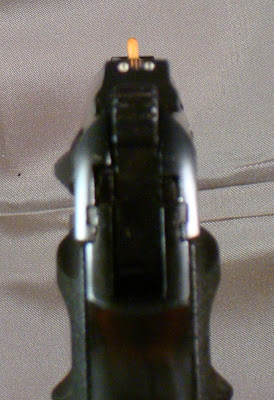 The rear notch is shallow which is not all that bad since the pistol, at 21 feet, seemed to be fairly well regulated. The notch needs to be wider and I will take a file to it as soon as I remember who I lent my metal files to.
The grips are rather bland, but certainly utilitarian for their intended purpose but I wish they were slimmer. This pistol is so thin that it would be great if the grips complimented that factor. I will probably have to live with this since I am pretty sure that there is not going to be an outpouring of aftermarket grips for this pistol.
I only had time and ammo enough to put 81 rounds through it and at least one round failed to properly feed in each magazine for the first several magazines. That began to clear up toward the end and I have to take into consideration that one, I was shooting the pistol dry right out of the box and two, even thousand dollar Kimber and Springfields require a lengthy shoot-in period. I anxiously wait next weekend to see if the FTFs work themselves out of the pistol.
On the next two subsequent outings the feeding malfunctions continued. Upon examining the rails it appeared that the slide may be catching on the hammer housing when it returned to battery. I have no evidence to prove that in that there are no wear marks on the housing but the housing area seemed to be about the place that there was a noticeable “hitch” when racking the slide and when removing the housing and racking the slide it moved back and forth very smoothly.
Fortunately today, on the fourth outing and about 350 rounds through the pistol, she performed without any malfunctions including hollowpoints and +P ammunition.
As I mentioned earlier the finish was better than expected and so was the short range accuracy:
These two targets were fired at from 21 feet with Remington 115 grain FMJ ammo. The target on the right was the first target shot out of the box and the one on the left was the second target. 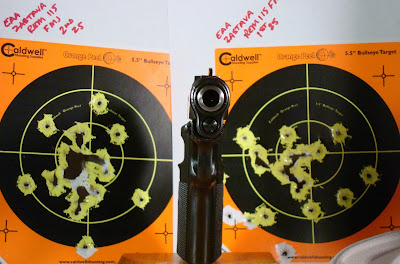 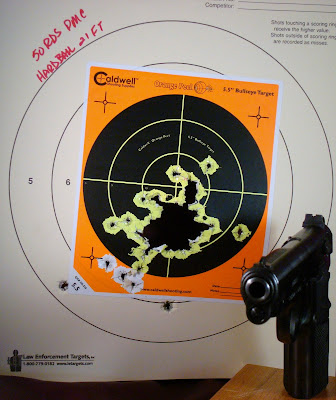 This target shows 50 rounds of the same ammunition fired at 31 feet. 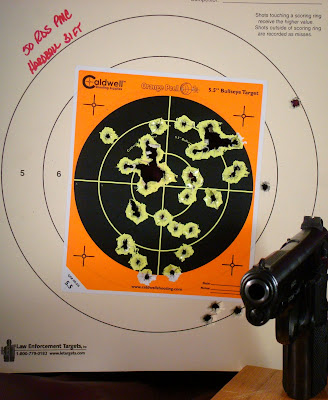 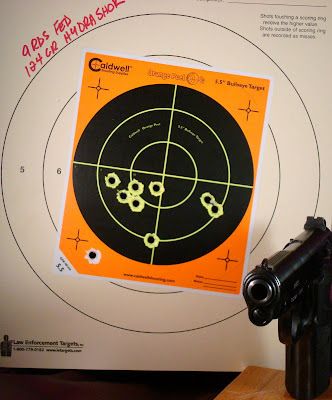 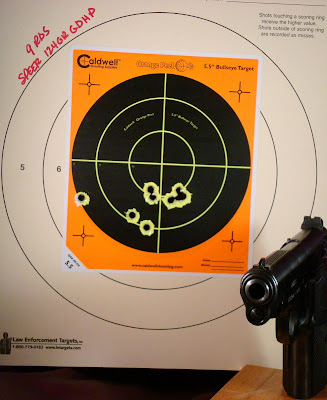 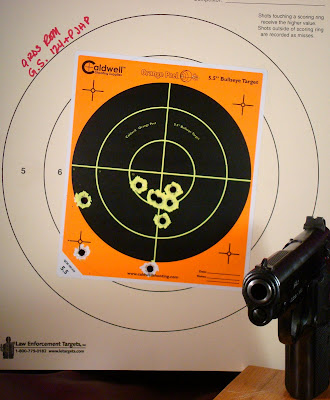 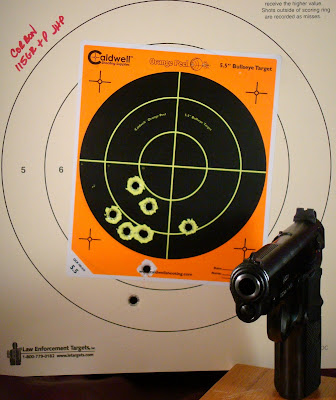 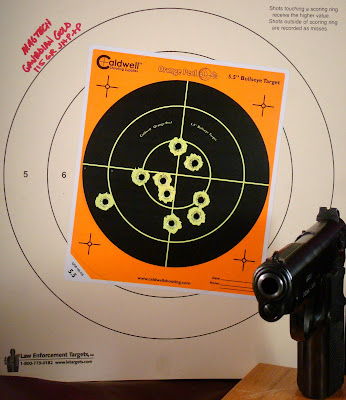 This pistol certainly is not going to win raves at the next BBQ but for someone on a limited budget this could provide them with basic protection. Another plus, God forbid, would be that if you were faced with having to shoot someone, you would not fret much about having to turn it over to the police like you would if it were your thousand dollar Kimber or Springfield status pistol.
Posted by Average Joe's Handgun Reviews at 9:36 PM