The Para CCW is staunchly aimed to appeal to the people fortunate enough to live in a state that recognizes the rights of law abiding citizens to exercise the 2nd Amendment of the Constitution. If you are one of these fortunate people and you want to exercise your rights with a pistol chambered in the time-proven .45 caliber cartridge the CCW is a great choice. I don’t think there is such a thing as a perfect concealed carry weapon but this one comes close. 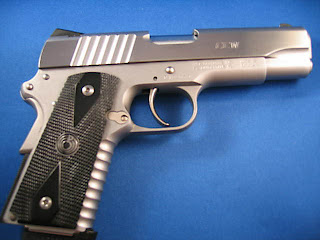 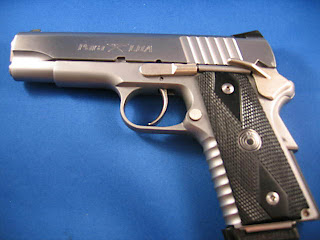 Here’s what the CCW has to offer:

1. The Light Double Action (LDA) trigger. Some people are concerned that the single action trigger pull is a liability problem. The are afraid of over-zealous prosecutors or civil injury attorneys who will argue that the short and light single action pull is prone to accidental discharge by a person under the adrenaline fueled stress brought on by the life threatening situation that necessitated them to present the pistol. There can be some truth to this. If you are going to carry a single action pistol you need training and practice. Just going to the range and target shooting is not sufficient as most people at the range shooting a single action pistol just load and fire. The safety is an integral part of the pistol’s operation and most shooters do not practice engaging and disengaging the safety and darn few ranges actually allow their patrons to practice drawing their weapon from a holster, concealed or otherwise. Failure to practice using the safety means that you may forget to disengage it at the moment of truth. It also means that you may forget to engage it when holstering the pistol. Fortunately both the operation of the safety and drawing the weapon can be practiced in your garage or backyard (if your backyard is enclosed to the point that you won’t be alarming your neighbors) by making sure (and then double checking) that the pistol is empty. It would also be a good idea to practice moving while drawing and seeking cover. Standing still and shooting is great at the range but in a real live encounter movement and cover are your best friends. Surviving the encounter by NOT getting shot is at least as important, if not more so, as your shooting skills.

If you are not dedicated to the practicing all aspects of pistol craft then do not carry a single action semi-automatic pistol. Get a good revolver; Smith & Wesson, Ruger, and Taurus make some great ones.

Anyway, back to the LDA trigger. The LDA operation provides a long but light, smooth double action pull that stacks just before firing. This is good as the stacking acts as a final notification that the pistol is about to go “bang”! If you are unconsciously pulling the trigger this gives you a chance to stop while on a single action pistol the weapon would have already fired.

2. Size. To put it in Colt’s nomenclature the CCW provides a “Commander” sized barrel and slide mounted on an “officer” sized grip frame. The longer tube and slide is not that difficult to conceal while the shorter grips frame means that there is less of the pistol’s butt to stick out or “print” under your concealment garment. The “Commander” length barrel and slide also help tame recoil and provide a longer sight radius all of which enhances accuracy. The CCW also sports very thin composite grips which enhances the conceal ability of the piece.

3. The CCW has easy-to-see, low drag, and low snag sights which assist in the presentation and aiming of the pistol.

4. You get the no-nonsense appearance of a model 1911 pistol. This is immediately identified as a serious weapon carried by a serious and determined individual. The .45 was carried by the heroic Sgt. Alvin York in the Great War and legendary lawmen like Frank Hammer and Melvin Purvis. The 1911 carried us through two World Wars and the conflicts of Korea and Vietnam.

As I mentioned earlier, there is not perfect concealed carry handgun and this is exemplified by the CCW’s size which, while fairly small, is not a pocket pistol. And, while it is by no means heavy, it is an all steel pistol and weighs 34 ounces. This pistol will have to be carried in a holster underneath some outergarment. 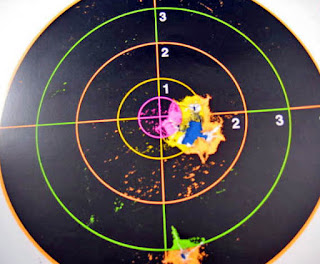 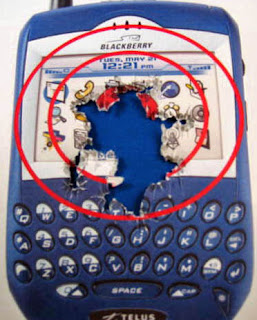 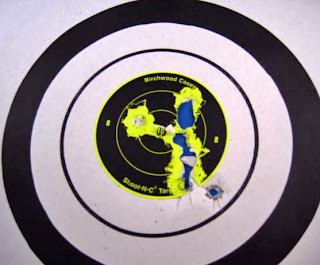 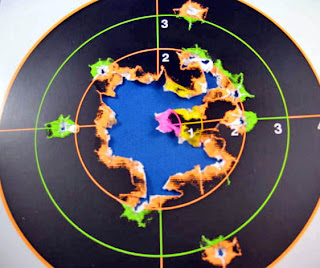 (Target at left placed at 50 feet and hit with 50 rounds of Remington UMC 230 grain FMJ ammunition)
Interestingly in the April/May edition of Guns & Ammo Handguns Paul Scarlata gathered a panel of five people to conduct a shootout of the most popular polymer police pistols, the Glock 17, Springfield XD, Smith & Wesson M&P, and the H&K P2000. The shooters rated the pistols from 1 to 5 in the following areas ergonomics, trigger control, recoil control, sights, accuracy, and ease of reloading. For the purposes of comparisons they threw a Para Ordnance LDA pistol into the mix. Here’s how they faired:

This is pretty fast company and the Para Ordnance LDA tied for first place. This is not to say that the polymer pistols are not good. They are good. This just shows that if you are looking for a double action pistol the Para LDA is a very good choice…and a much better choice than a Glock.
Posted by Average Joe's Handgun Reviews at 12:30 AM