In the early 1890’s the Russian military began looking for a replacement for the Smith & Wesson breaktop revolvers that they had been issuing since the 1870’s. The Smith & Wesson model #3 chambered in .44 Russian was a well made revolver shooting a formidable round; however the .44 Russian was a black powder cartridge and smokeless ammunition was taking the world by storm. Black powder created a lot of smoke and it only took a few rounds fired by each soldier to completely obscure the unit’s field of vision. 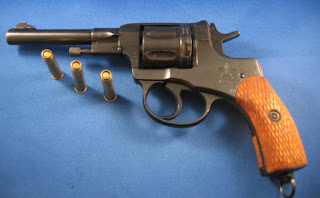 After looking over many designs the Russian military settled on a revolver design with a seven round capacity patented in 1894 by Leon Nagant, a Frenchman. Nagant was well known by the Russian Army as they had adopted the Mosin-Nagant rifle in 1891. The Nagant revolver was accepted by the Russian government in 1895 and thus it became the Nagant model 1895 and was chambered for the 7.62X38mm cartridge.


The Nagant revolver saw duty in World War I, the Russian Revolution and World War II. By WWII the Russians had adopted the Tokarev Model TT-33 but the Nagant revolvers were produced through 1942 and were exported to Communist Bloc countries. Our armed forces continued to bump into Nagants in both Korea and Vietnam. It is difficult for me to understand the proliferation of this revolver at it seems to me to have several major flaws. The first is the caliber. The 7.62X38mm cartridge pushes a 98 to 108 grain bullet along at 950 feet per second. Recoil is minimal, about the same as firing a .32 caliber cartridge. I just cannot see this round being effective in normal conditions and it certainly must have been at quite a disadvantage during the Russian winter when everyone was bundled in multiple layers of heavy clothing and outerwear. Again the Smith & Wesson breaktop revolvers in .44 Russian fired a much more potent manstopper.

The second flaw is the operating platform. The Nagant was produced in both single action for enlisted men, and double action for officers. The double action pull is the longest and hardest trigger with which I have ever dealt. The double action pull is so strong that it is infinitely easier to just fire it in single action, the same action as employed in their Smith & Wesson revolvers.
The last flaw is the slow reloading process. Once the seven rounds have been fired here is the process for recharging the revolver.

Step one: Lower the loading gate on the right side of the revolver behind the cylinder.

Step Two: Pull the ramrod out of it’s housing underneath the barrel. In some productions the ramrod had to be unscrewed.

Step Three: Rotate the ramrod over to the right and line it up with the front of the cartridge chamber.

Step four: Use the ramrod to knock out each of the seven cartridges one by one. And, by the way, the ramrod is not spring-loaded so it does not automatically retract after punching out the cartridge.

Step nine: Turn around because by now the enemy has overrun your position.

At least with the Smith & Wesson revolvers, the breaktop action ejected all of the spent shells at once, making reloading a lot easier and much faster.

Century Arms International has acquired a large number of Nagant 1895s and done a stellar job of refurbishing them. The exteriors have been reblued with great care as all of the markings remain crisp. The revolvers have an attractive price and can be found for less than $100.00. However, here’s the rub; the 7.62X38mm ammunition is a specialty round. It is difficult to find and the retail price hovers around $40.00 for a box of 50 cartridges.

The Nagant is an interesting and unusual revolver; this particular specimen was manufactured in 1939. The grips look unfamiliar and uncomfortable to the western eye; however they turned out to be quite comfortable when firing. The firing pin is attached to the hammer and is a long, slightly crooked spindle looking thing that appears to be exaggerated and possible delicate. The same goes for the rest of the revolver, it is a sparse and sinister handgun that looks as if it would be brandished by some weird gothic fantasy character in a Tim Burton movie. 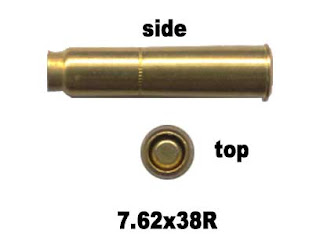 The first target was placed at 21 feet and fired at with 48 rounds of Fiocchi 98 grain ammunition. While no tack driver all shots landed within the 6 inch target. 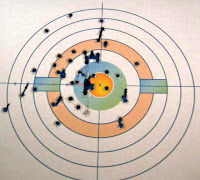 It is also said that the revolver can also fired any .32 caliber revolver ammunition (revolver not .32 ACP semi-automatic rimless ammunition). The second target show 25 rounds of Federal .32 H&R Magnum JHP ammo fired at 21 feet. Again, the performance is OK, but not stellar. 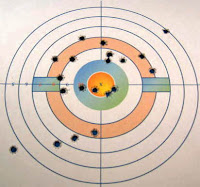 The Nagant reportedly did not do well against enemy soldiers in WWI so it is no surprise that the Russians began looking for a replacement and adopted: 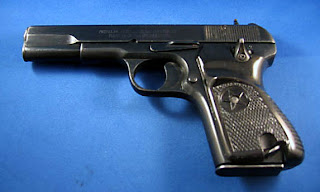 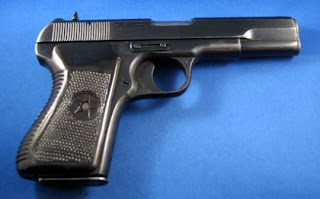 The Tokarev is the pistol that replaced the Nagant as the official sidearm of the Russian military. What has intrigued me about this pistol is that the Russians were enamored of the John M. Browning designs for the Colt Model 1903 .32 ACP pistol and the venerable Colt Model 1911 .45 ACP. The Russians strived to produce the pistol with the appearance and ergonomics of the Model 1903 but in a more potent combat caliber. 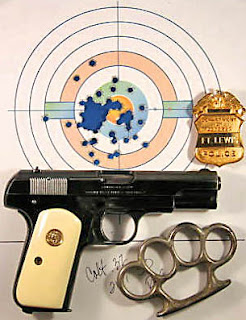 (Pictured left: Colt Model 1903 was the pistol that the Russian military was attempting to emulate with the Tokarev.)

The Tokarev is a single action pistol chambered for the 7.62X25mm cartridge which has a lot more pep than the round fired by the Nagant revolver. The Tokarev 7.62X25mm pistols pushes an 85 grain bullet out the muzzle at 1647 feet per second with 514 foot pounds of energy. This is faster and more muzzle energy than any 9mm bullet and starts to put it on par with some of the +P .45 ACP and .357 Magnum offerings. Wolf ammunition makes a hollow point cartridge marketed in their Gold line of ammo. This is not a round to be trifled with.


The Soviet Union ceased production of the Tokarev in 1954 when it adopted the Makarov pistol. However the Tokarev continued to be produced in other communist countries, most notably by China whose People’s Liberation Army’s state weapons manufacturer, Norinco continues to produce them today.


The specimen being examined here is one of the Norinco models manufactured in 1958. Norinco added a safety mounted on the left side of the frame; there was no safety catch on the original Tokarev design. Norinco began to export large quantities of their Tokarev clone in the 1980’s primarily in 9mm; however the pistol examined here is chambered in the original 7.62X25mm. President Clinton banned the importation of Chinese firearms in 1993 and I have not seen one since the late 1980’s until this one landed at Cliff’s Guns, Safes, and Reloading in Boise. I believe this was a part of a large lot of police confiscation handguns that Cliff picked up at an auction in Reno.


To be honest, I rather like this pistol. It is rugged, fairly flat and thin (I is .83 inches wide as compared to the U.S. 1911 which is .92 inches wide), the fixed sights, which are rather rudimentary, provide a good sight picture (and I did have the gunsmith at Impact Guns move them to the right and enlarge the rear notch) and the single action trigger pull actually borders on very good. One common complaint was the fairly straight grip which was remedied by the Egyptian military who employed a wrap around, curved plastic grips. The Chinese Norinco model adopted these grips which greatly improve the overall ergonomics of the pistol. One would be well armed with this pistol. Ammunition is not as difficult to find and I secured Sellier & Belliot 85 grain FMJ and Wolf Gold 85 grain FMJ at Cabela’s. Logging on the Midway USA’s website I ordered up some Winchester 85 grain FMJ and the Wolf Gold 85 grain JHP. I put 500 rounds through this pistol this week without any reliability issues. The Wolf Gold ammo turned in the best performances in both the FMJ and JHP offerings (imagine that, the Russian ammunition worked he best!). I have not seen any ballistic testing on the 7.62X25mm JHP but I would imagine that the expansion should be pretty good since the bullet leaves the muzzle at over 1600 feet per second.


While I like this pistol, but there are a few negatives. First is the safety. This is little more than a lever that you move forward to fire and thumb it back to make the pistol safe. While it works well, I tested it with live ammunition in the chamber several times, there is no “catch” to indicate that you have engaged or disengaged it when moving it. Unlike a 1911 where you can feel the “click” when moving the safety the best you can do on the Tokarev is push the safety lever until it will go no further.


Another issue are the grips. They are certainly hand filling and an improvement over the original side panel grips on the Russian issued pistols, but they feel slightly loose and I cannot figure out how they are attached to the grip frame. I would love to find some classier wood grips but I doubt if anyone produces such an item.


Here are the targets:


The first and second targets were placed at the 21 foot marker and absorbed 50 rounds of Winchester 85 grain FMJ ammunition. The Winchester rounds tended to shoot to the left. 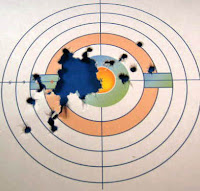 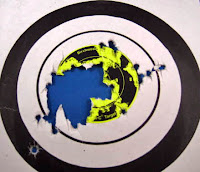 The third target was placed at 35 feet and fired at with 40 rounds of the same Winchester ammunition. 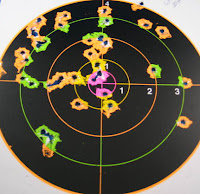 The fourth target was placed at 21 feet and fired at with 25 rounds of Wolf Gold 85 grain JHP ammo. The Wolf shot truer to point of aim than the Winchester. Now this is good practical accuracy. 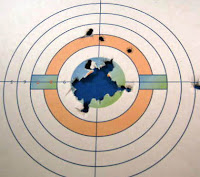 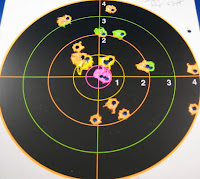 In conclusion, the Nagant Model 1895 is an inexpensive curio and historical conversation piece but it was hardly a practical combat firearm in 1895 and is certainly less so 112 years later. The Norinco Tokarev clone is actually a fairly good pistol. I would not hesitate to carry it today and would pity the criminal aggressors who found themselves on the business end of the muzzle. If the Tokarev was good enough for Boris Badinov, Natash Fatale, and "Fearless Leader" it is good enough for me and if you do not understand these references you're too young to be reading this blog.
Posted by Average Joe's Handgun Reviews at 12:07 AM