Cliff, the proprietor of Cliff’s Guns, Safes, and Reloading located in the burgeoning megalopolis of Boise, is a very stoic and reserved man. He is not prone to petty excitements over routine matters. So it was out of his character last Saturday when I walked into his shop and he rushed toward me saying that he had been holding something to show me and then nearly ran to the safe in his firearms showroom. When Cliff does this it likely means that he has something fairly unusual, probably expensive, and more than likely manufactured by Kimber. And so it was……. 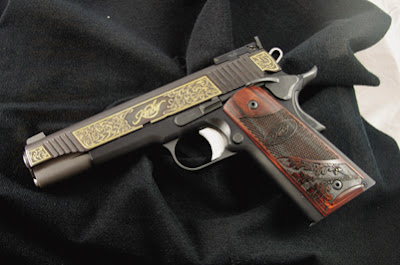 Cliff produced the Kimber Diamond Grade .45 ACP semi-automatic pistol. A limited edition of 450 handguns manufactured by Kimber for Lew Horton and Talo distributors. Cliff wanted to know if I was interested. To a certain degree a foolish question; wouldn’t anyone who saw this pistol be interested in owning it. I began to play through my mind what I might have to trade for it and mentioned a couple of long arms that are of premium quality but I never shoot. I see no reason to go to the trouble to move a barely fired rifle and unfired shotgun with me to Minnesota in June so I was willing to make them a part of the negotiation. Cliff however did not seem to be interested. I asked if he would at least take a look at them explaining that as we are in the process of purchasing a new home and have mortgage brokers examining our credit history and financial liabilities now does not seem to be the appropriate time to be placing the purchase of an expensive handgun on an interest accruing credit card. On Tuesday of the following week I returned with the two long guns and as uninterested as Cliff had been he seemed to be quite intrigued by my Mitchell Peregrine 20 gauge over and under shotgun. This lightweight shotgun was manufactured in Turkey and sports handsome walnut furniture along with a minimally but tastefully engraved silver aluminum receiver. Cliff declared that its lightweight made it a perfect dove gun and offered to his wife to heft. Cindy, Cliff’s devoted, endearing, and patient wife declined his invitation and made a dry inquiry if this shotgun was going to be store inventory or personal inventory. I believe that Cliff indicated that it would be store inventory but I would not be surprised if he tried it out…so he could better describe its handling qualities to prospective buyers.

And the deal was done.

So What Did I Get

The Kimber Diamond Grade is a full-sized, Government model 1911 .45 ACP pistol. It is unclear if this pistol was produced through the Kimber custom shop and since there is no indication that it did I will assume that it did not. The pistol has the standard Kimber lightweight aluminum grip frame with a steel slide. The barrel is of the Kimber match variety which fits into the slide with a standard Kimber barrel bushing and full length guide rod. (You will note that I keep saying “standard Kimber”. Standards for Kimber are the high water mark for other production pistols so when I say “standard Kimber” remember that really is a designation for premium manufacture, fit, and finish.) The rear sight is adjustable for windage and elevation and both the front and rear are plain black. The thumb safety is not ambidextrous, which doesn’t bother me in the least. One feature that seemed a little odd was the recoil spring. At 6.5 inches it extended a full three inches beyond the barrel prior to stuffing it underneath the barrel bushing. This is the longest recoil spring I think I have ever had on a model 1911 pistol. I don’t know if the longer spring is responsible but I can tell you this. This pistol required no break-in period for reliability. I put 600 rounds of Remington, Sellier & Bellot, and Mag-Tech through it with absolutely no problems.

Lastly we are left with the appearance of the pistol. The slide is blue and has been highly polished and topped off with 24 karat gold laser engraved scroll work. Now the gold scroll work may not be to everyone’s tastes but the grips would probably be appreciated by everyone except Ebenezer Scrooge, The Grinch, and Diane Feinstein. The grips are deep rosewood and beautifully executed with diamond checkering and leaf scrollwork.

On my first outing to the range I loaded seven rounds into the magazine and fired at 21 feet. The rounds clustered a little low and to the left of the bulls eye but not bad. I made a few adjustments to the elevation and windage and fired the next seven. The elevation was just about right but the rounds hit even a little more to the left than the first time. I adjusted the rear sight to the right a few more clicks and tried again. Now the group was even further left. I readjusted the rear sight with the same unsatisfying results. This time, as I went to readjust the rear sight something caught my eye. That something was the front sight which was barely hanging off the right side of the slide. I pushed the sight back into the dovetailed channel and found that it was extremely loose. I immediately went out to the gunsmith at the Impact Guns range and a few drops of Lock-Tite and I was back in business.

So, once the front sight was firmly in place, how did she shoot? Just like a Kimber!. 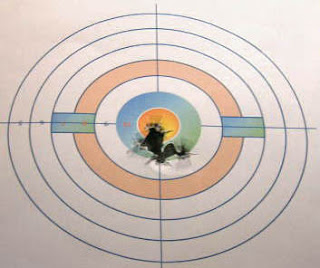 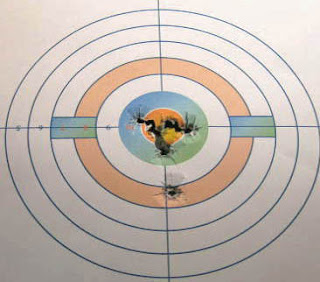 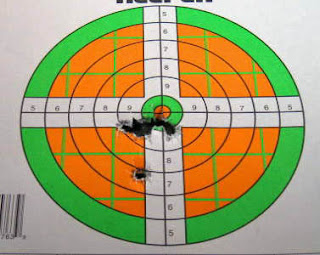 Same range with Mag-Tech 230 Ammunition. It seems the more I shoot Mag-Tech ammo the more I like it. 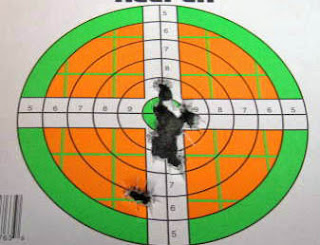 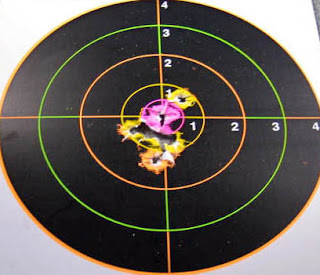 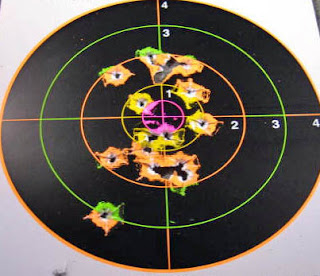