After last week’s review of a couple of good revolvers I wanted to add another one to that list, give a quick update on another revolver, and talk about a darn good semi auto as well.

Over the past several years Smith & Wesson has gotten back into the revolver game in a big way. They are also producing some premier 1911 pistols making them one of the most diverse handgun manufacturers in business today. Probably only Taurus rivals them in terms of the number of different revolver and auto pistols models being produced. My only complaint with Smith & Wesson is the going retails for their products. They are very expensive.

This year Smith & Wesson has introduced their “Classic” line. I am eagerly awaiting their re-introduction of the Model 1917, a true classic .45 ACP revolver which is set to ship in March of this year. Along with the reintroduction of their classics for the Smith & Wesson catalogue S&W has also produced limited productions of some great classics for Lew Horton Distributors. Horton has asked S&W to bring back their “Registered Magnums” which are the premium Model 27 with a five inch barrel and one with a three inch barrel. Trivia time—a three inch barreled Model 27 was carried by G. Gordon Liddy when he served with the FBI. As an update, these new 27’s will sport an eight round cylinder. 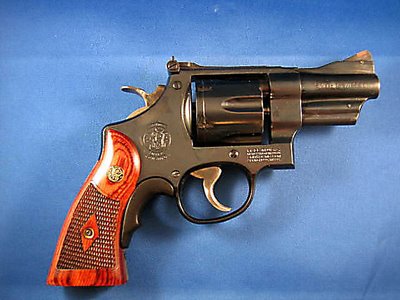 Today we are examining the Model 25 produced for Lew Horton which is a three inch barreled .45 ACP built on Smith’s large “N” frame. Here are the specifications:

The wood grips on this specimen are absolutely beautiful and the white outlined rear adjustable sights paired with the red ramp front sights provide a very good sight picture. My age is clearly shown when I realize that this sight set-up is now considered old fashioned, but was all the rage when I started shooting 21 years ago. 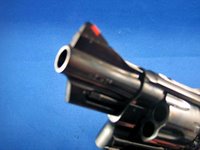 I added a Tyler T-Grip adapter to the wooden stocks to improve the “gripability” of this revolver. 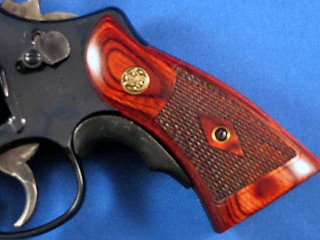 The double action trigger pull was stiffer than I prefer, but not by much. Hopefully a little more trigger time will improve the pull. Here are the targets” 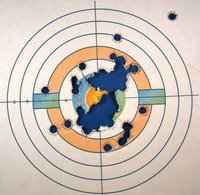 The first target was placed at 21 feet and shot with 50 rounds of CCI Lawman 185 grain FMJ ammunition. 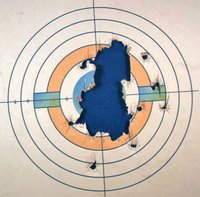 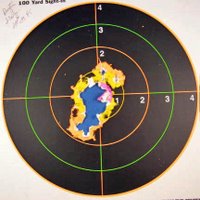 The third target was shot at the same distance with 25 rounds of Remington 230 grain FMJ ammo. 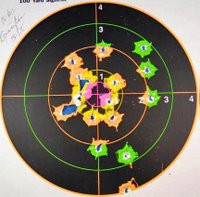 The fourth target was placed at 50 feet and took 18 rounds of the same Remington ammo. 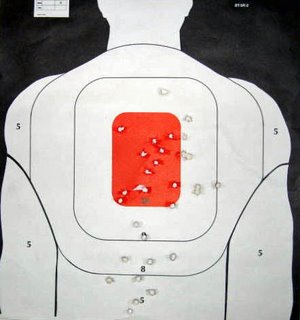 The last target was placed at 21 feet for some double-taps point fired from a two handed-waist high presentation.

As any reader of this blog knows, my favorite concealed carry piece is my Smith & Wesson model 340 PD which is a scandium framed 12 ounce revolver with a 1 7/8 inch barrel. Well, curiosity finally took hold and I decided to try some .357 Magnum rounds. The target below was fired at 21 feet with three rounds of 140 grain CorBon jacketed hollowpoint ammunition. 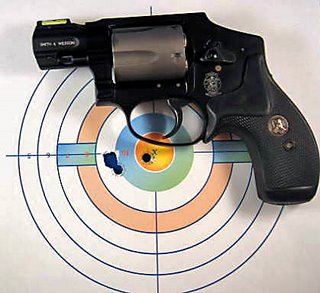 Now, you may be asking why I only fired three rounds. I would like to tell you that I was being thrifty to due the high cost of a 20 round box of CorBons. However, three rounds were really all I could take. I was impressed with the accuracy however. Maybe I should load the make the CorBon the first and last load separated by three +P cartridges.
Posted by Average Joe's Handgun Reviews at 10:41 PM