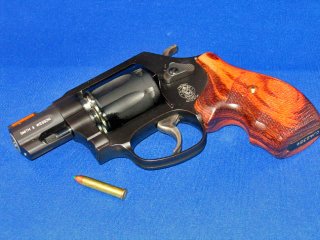 I have always had a soft spot in my heart for the .22 Magnum. The first firearm I purchased as a lad of 19 was a Marlin model 783 bolt action .22 Magnum holding 10 rounds in a tubular magazine underneath the barrel. I wanted a caliber more powerful than a plain old .22 Long Rifle. I scanned the catalogue pages of the 1976 Guns and Ammo Annual and found the Marlin. So, not realizing that the .22 Magnum rounds were about three times more expensive than the Long Rifle cartridges, I went into the Southern Plaza branch of Em-Roe Sporting Goods and plunked down my hard earned Osco Drug part-timer’s wages and ordered the Model 783. Years later while living in Los Angeles I purchased a stainless steel Smith & Wesson J-frame .22 magnum revolver with a 3 inch bull barrel from the Pony Express Gun Shop in Northridge based upon a favorable article I read, again, in Guns and Ammo. I eventually traded it in on something I don’t remember and was very interested with Smith & Wesson introduced a lightweight J-frame .22 Magnum revolver.

Smith & Wesson had given this model 351 the “PD” designation which stands for “Personal Defense”. You can protest all day long that the .22 Magnum is not appropriate for defense against anything other than vicious squirrels and you won’t get an argument from me. Although we would all have to agree that a great number of people have chosen a .22 Long Rifle for concealed carry. After all, North American Arms sells a lot of their teeny-tiny Mini-Revolvers and they ain’t being used for hunting! Besides, at 10.6 ounces the S&W 351PD is extremely lightweight and offers you two more rounds than the NAA Mini-Revolver.

I have written about this revolver before and this test was to find the best load. The .22 Magnum has never actually gained much of a reputation as an accurate cartridge and as this revolver only sports a 1 /78 inch barrel it didn’t really set the world on fire when I tested it before. For this review I rounded up all of the different .22 Magnum loads I could find at Sportsman’s Warehouse. These included the Winchester Dynapoint, CCI Maxi-Mag TNT, and the CCI Maxi-Mag + V. As I headed off to shoot my test I stopped by Cliff’s Guns, Safes, and Reloading where Cliff had a few boxes of Remington Premier .22 Magnum ammo sitting on the shelf behind the counter.

The targets, 50 rounds fired at 21 feet for the Winchester and two CCI loads are shown below. While they are OK for a fairly short distance, they are hardly spectacular. (Target 1-CCI Maxi-Mag TNT, Target 2-CCI Maxi-Mag + V, Target 3- Winchester Dynapoint) 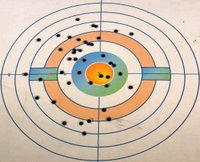 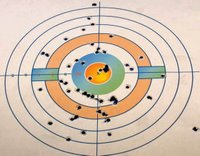 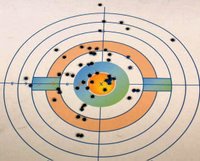 The Remington, on the other hand turned in quite a good performance from the short barrel. 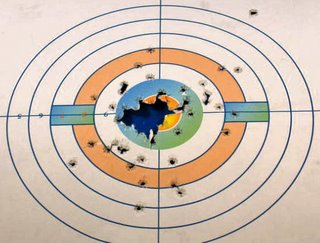 The Remington Premier sports a Hornady V-Max spitzer bullet that weighs 33 grains. In a six inch barreled revolver the Remington has been clocked at 1,471 fps and 158.5 ft-lbs of energy. In this short of a barrel we would expect those numbers to reduce more than a tad. Regardless, due to the accuracy and ballistics the Premier appears to be the best bet if carrying a .22 Magnum revolver for self defense.
Posted by Average Joe's Handgun Reviews at 10:11 PM