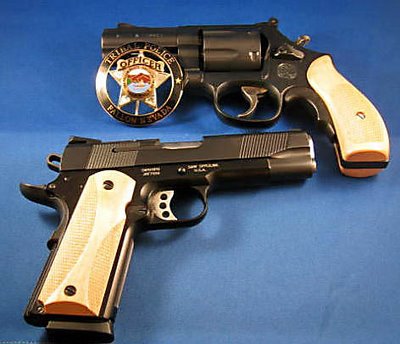 In this edition we examine two combat handguns from Smith & Wesson, the Model 1911 PD in .45 ACP and the Smith & Wesson 586 L-Comp from S & W’s performance center chambered in caliber .357 Magnum. Perhaps we should start by describing what a combat handgun is and is not. One of the most best and basic description was given by Col. Jeff Cooper when he was asked what features a combat handgun should have. His reply was “good sights, a manageable trigger, and precious little else”. In his direct way Cooper described what it is and isn’t. It is basic & simple and devoid of all of the bells and whistles that some people are fond of adding on. While many custom options are good we need to be cognizant of the fact that the more do-dads that are added on mean more things to be taken into consideration in the face of the turmoil that occurs in a shooting situation and it also means that there are more things that could fail, break, malfunction, and fall out when your fat is in the fire. Although I do not care for Glock pistols they are simple to operate with “precious little” in the way of add-on options that might go wrong at the wrong time. There are probably three other requirements that I would add along with good sights and a manageable trigger and those would be reliable, acceptably accurate, and chambered in a major caliber.

Both of the handguns being examined in this article fit the bill. The Smith & Wesson 1911PD is chambered in the combat tested .45 ACP, has a great single action trigger, good Novak Lo Mount 3-dot sights, has given me no reliability problems in the 1,000 rounds I have put through it and, while not a target grade tack driver, is more than acceptably accurate. Here are the specifications for this pistol:

The Model 1911PD sports a scandium alloy frame with a carbon steel slide and is therefore fairly lightweight at 28 oz. It definitely has a little oomph when fired, but I actually found it to be fairly fun. I spiced up both the 1911PD and the 586 L-Comp with Light Cherry wood grips from Barsony Holsters & Belts, which I found on eBay. I was looking for something different and inexpensive and the Barsony grips fit both requirements; the grips were less than $20.00 each and the grain in the wood was so fine that they almost give the appearance of being aged ivory. 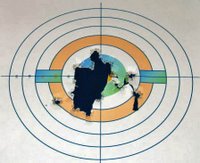 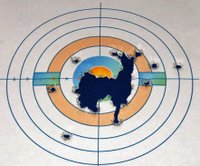 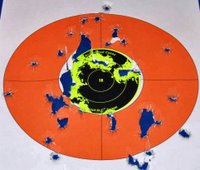 The 586 L-Comp comes from the Smith & Wesson Performance Center meaning this is a custom production model. However it still fits both mine and Cooper’s requirements for a Combat handgun. The .357 Magnum is certainly a major caliber (and the 586 gives you a capacity of 7 rounds rather than just 5). As is it a revolver it is certainly reliable, the trigger was slicked up at the factory the rear sight is adjustable and the front sight is ramped with an embedded Tritium night sight dot. Lastly all of the preceding attributes along with the compensated barrel help to make this revolver more than acceptably accurate.

The 586 L-Comp is actually fairly pleasant to shoot with full powered factory .357 ammunition. This is due to the fairly hefty weight (almost 10 ounces heavier than the scandium 1911PD) and the compensated barrel. In fact, with the compensated barrel and the full powered ammo, this little revolver is a bonafide fire-breathing dragon. I hope to take my digital camera with me to the range to try to capture the image of the fireball that is expelled when this handgun fires.

With a number of different brands of ammo, here’s how she shot: 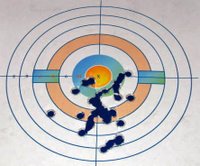 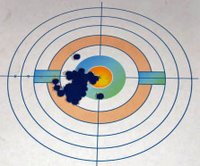 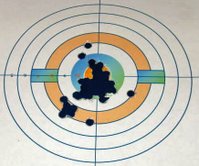 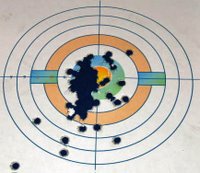 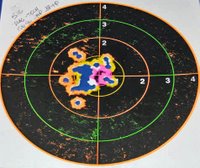 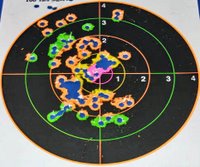