A Tale of Two Pocket Pistols 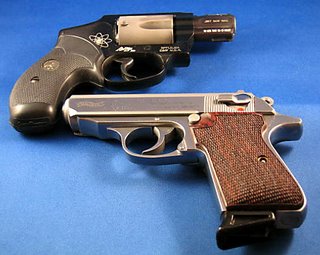 Last week we compared the Rohrbaugh 9mm, a fairly new pocket pistol design, to the Smith & Wesson 340 PD, a standard S&W J-frame .38 Special design updated with a Scandium frame, Titanium cylinder and Stainless Steel barrel insert. I referred to the J-Frame as the American standard for Pocket Pistols and I stand by that designation. I will agree that a lot of great things have been done to produce small-sized 9mm and .45 ACP pistols, but my unscientific guess tells me there are more S&W J-frame .38’s being dropped into pockets than there are Kimber Ultra-Carry .45s.

This week I will compare the American Standard (again the 340 PD) against what was once the European Standard for Pocket Pistols, the Walther PPK/S in .380 ACP. The small frame Walther series included the Model PP, PPK, and PPK/S. The manufacture of these pistols began with the PP in 1929. In 1931 Walther shortened both the grip frame and barrel length to produce the PPK (Poliaeipistole Kriminalmodell or Police Pistol Detective Model). During WWII the Walther factory was decimated and after WWII Walther licensed the models to be produced by the French firm Manurhin until Walther was able to begin production again. Later they were imported by Interarms of Alexandra, Virgina and Interarms eventually became licensed to produce them here. Now that Interarms has ceased business they are being produced by Smith & Wesson.

The smaller PPK quickly became the more popular of the two pistols and was originally chambered in .32 as well as .380 ACP. In fact, Smith & Wesson is once again producing them in .32 ACP so there must be a market for the weaker caliber. Perhaps it is historic nostalgia for the .32 ACP since Adolph Hitler allegedly used a .32 PPK to commit suicide and for many years the .32 PPK was James Bond’s pistol of choice. Although I can’t see selecting a weak caliber just to emulate a fictional spy. After all, in most of the films Bond’s fat was frequently pulled from the fire by a female acquaintance—in Goldfinger he was saved by a woman named Pussy Galore. Suave and macho are not always shared qualities.

The Gun Control Act of 1968 banned the importation of the PPK as it contained both a short grip frame and barrel. Walther responded by combining the longer grip frame of the Model PP with the PPK slide/barrel in order to get around the GCA ban. Thus the PPK/S was born and to me, this was a smart move as the PP’s frame allows me to get a full grasp which I much prefer to the two fingered grip of the original PPK.

What I like about the 340 PD
1. Reliable and simple to operate. Revolvers just don’t jam unless you are using cheap, poorly manufactured ammunition and to use it all you have to do is just aim and press the trigger.
2. Lightweight and easy to carry. The Scandium and Titanium parts make this a 12 ounce wonder. The Walther weighs almost twice as much. The lightweight makes is easy to carry; just drop it into a pocket holster and you are ready to go. No need to worry about having to conceal it under a jacket or shirt or having to keep a jacket on when it is too warm. The PPK/S is fine for coat pocket carry, but is too heavy for dropping into a pants pocket.
3. Good sights. The Hi-Viz green fiber optic sight is easy to pick up even in low light conditions.
4. The .38 Special is a proved and effective cartridge. 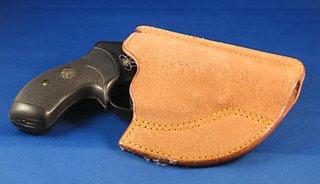 (340 PD in a Galco Pocket Holster. The Galco provides quick access and stays put in the pocket. Below the 340 PD rides in an unmarked belt holster purchased at a gun show. This is a very thin leather holster with a magnetic flap that goes over the belt and magnetically sticks to a steel disc embedded in the lower left portion of the holster. A few pair of trousers that I own have a change pocket sewn into the main pocket. This magnetic flap fits easily into this pocket and turns this into a great pocket holster.) 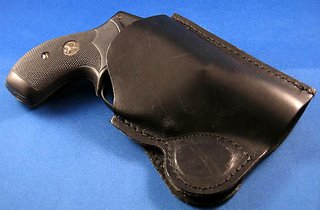 What I like about the PPK/S
1. It is a cool looking gun. Hardly a reason for solely selecting a defensive handgun but it is a decision factor nonetheless.
2. Accuracy. As the upcoming targets will show the PPK is easier to fire and more accurate with most all loads than the lightweight J-frame revolver.
3. Firepower. The PPK/S holds three more rounds than J-Frame .38 Special so it keeps you in the fight longer.
4. While the PPK/S is too large for pocket carry, it rides nicely in an appropriate belt holster. As the weather is turning cooler, this will be easy to wear and conceal. 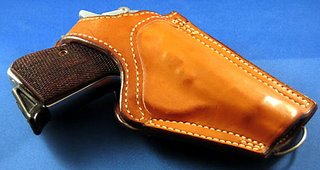 (Walther PPK/S in a Safariland Klipspringer holster. Safariland manufacturered these revolvers in the 1980's and have unfortunately discontinued the line. The clip-spring on the reverse of this holster made it very easy to put on and take off.)

For this range report I went to my local Sportsman’s Warehouse and Cabela’s to select an assortment of .38 Special and .380 ACP ammunition in order to see how accurate the defensive loads were in each of these handguns. All shooting was done at 21 feet. Let’s start with the .38 Special. A fella could go broke trying to buy a box of all of the different .38 Special ammunition offered by today’s manufacturers. I selected nine of the most popular. 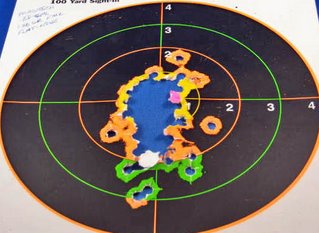 Magtech .38 Special 130 Grain Flat Nose with a Full Metal Case. The advertised ballistics have this round moving at 800 feet per second and generating 185 foot pounds of energy. This is more of a target load than defensive round, however the accuracy of the 50 rounds fired was very good and accuracy is my first consideration in selecting any round. 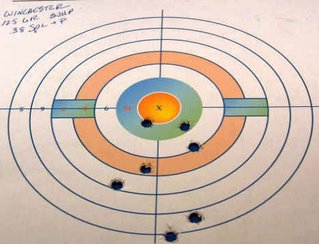 Winchester .38 Special +P 125 Grain Semi-jacketed Hollow Point with advertised ballistics of 975 feet per second and 264 foot pounds of energy. While this is a much more effective load, the seven rounds I had on hand showed acceptable but not stellar accuracy. 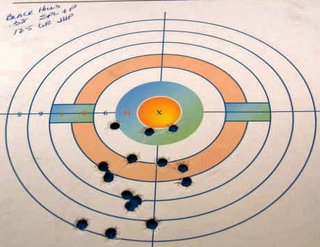 Black Hills .38 Special +P 125 grain jacketed hollow point with advertised ballistics of 1,050 feet per second and 306 foot pounds of energy. This is an even more effective load but does not offer the accuracy I would like to see. 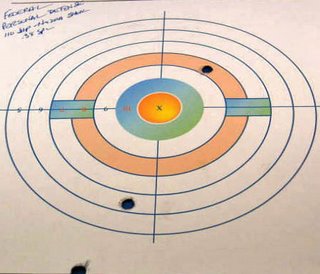 Federal Personal Defense .38 Special 110 grain Jacketed Hollow Point Hyrda Shok ammunition with advertised ballistics of 950 feet per second and 220 foot pounds of energy. The barrel shroud of the S&W 340 PD states that you should not use ammunition with a bullet weight of less than 120 grains. This target shows why. That light of a bullet looses too much making the jump from the cylinder to the barrel’s forcing cone and cannot stabilize in the short 1.78 inch barrel. 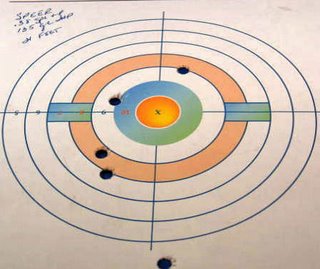 Speer .38 Special +P 135 grain Jacketed Hollow Point ammunition with advertised ballistics of 975 feet per second and 285 foot pounds of energy. Speer advertises this as being their “short barrel” round and although the ballistic performance might be good, I was not impressed with the accuracy. 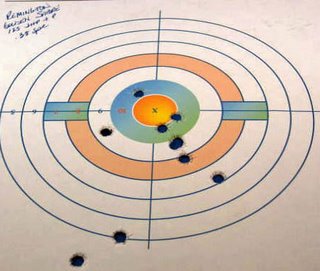 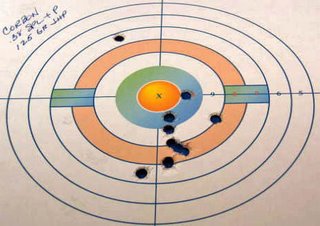 Cor-Bon .38 Special +P 125 grain Jacketed Hollow Point ammunition with advertised ballistics of 1124 feet per second and 351 foot pounds of energy. This round shows a pretty good balance of accuracy and ballistic performance. The 10 rounds fired grouped fairly well especially in terms of windage. If this string was moved 2 inches north on the target it would be considered excellent accuracy for a lightweight, short barreled revolver. 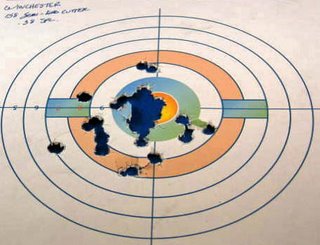 Winchester .38 Special 158 grain semi-wadcutter. This is primarily a target round but shows that this lightweight, short barreled revolver can deliver good accuracy. 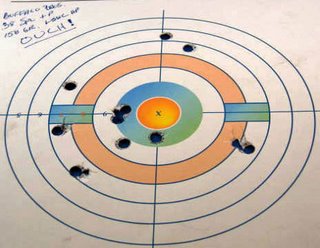 Buffalo Bore .38 Special +P 158 grain Lead-swaged wadcutter hollow point ammunition. All I can say here is OUCH! Buffalo Bore makes premium hunting ammunition and this is their special self defense round. Their advertised ballistics state that out of a 2 inch J-Frame this round will deliver 1,000 feet per second of velocity and 351 foot pounds of energy. This round hurt. It is probably the most effect round out there as this is a hard hitting and heaviest of the defensive rounds available…but it hurt to shoot. At arms length this would undoubtedly be a devastating round, however if any accuracy is required to shoot at a distance, this might not be a good choice. I want to try this round out of an all-steel revolver with a four inch barrel to see if the accuracy can be improved.

.38 Special conclusion. With the exception of the Buffalo Bore ammunition all of the rounds tested were pleasant to shoot. I think the Cor-Bon offered the best balance between effective ballistics and accuracy and I purchased a few more boxes of it today to see if, through practice and trigger control I can tighten the group and move it up. I would like to find a 158 grain lead-swaged wadcutter hollow-point in a +P loading that is not stoked to the wrist crushing level of the Buffalo Bore to see if accuracy and terminal performance can be even better balanced. I am sure someone makes such a round.

A trip to the ammunition section of these two stores showed that the selection of .380 ACP ammo is not nearly as diverse as the .38 Special. I selected five different manufacturers products although only three of them would really be considered defensive rounds. 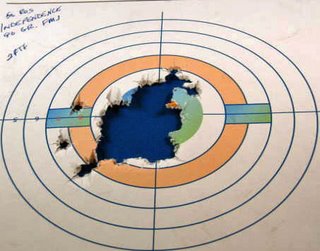 Independence 90 grain full metal jacket ammunition which shows an advertised velocity of 910 feet per second expending 165 foot pound of energy. This is merely a plinking round and the box of 50 showed good accuracy however I suffered 3 failure to feed jams. 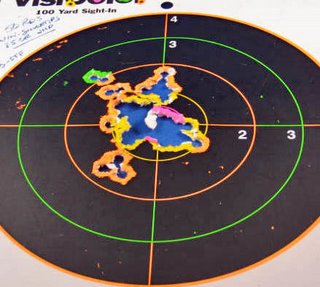 Winchester Silvertip 85 grain Jacket Hollow-points. This round is advertised as producing 1,000 feet per second and 189 foot pounds of energy. The 50 rounds fired showed outstanding accuracy and I encountered zero malfunctions of any kind. 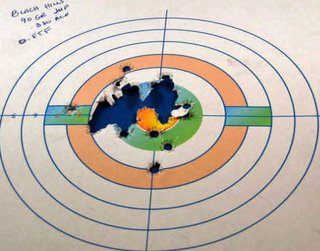 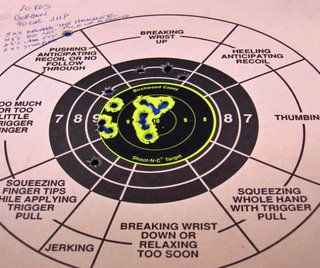 Cor-Bon 90 grain jacketed hollow point ammo showed the best ballistic performance at 1,050 feet per second and 220 foot pounds of energy. While this is the hottest round I could find it also posted the poorest accuracy of all ammo tested. Now the accuracy is not bad but functioning in my Walther was terrible. Of 20 rounds fired I encountered the following problems:
5 times the hammer dropped on a live round when the slide retracted. The round did not go off, however the hammer had to be manually cocked to fire the next round.
4 times the slide did not pick up the next round in the magazine when it retracted.
I had 3 failure to feed jams and 2 stove pipe ejections.
Out of 20 rounds only 6 went off without a hitch. This does not mean that Cor-Bon .380 don’t work, they just don’t work in my Walther PPK/S and this certainly illustrates the rule that you do not load any ammunition for carry & defensive purposes unless you have thoroughly tested it in your weapon. 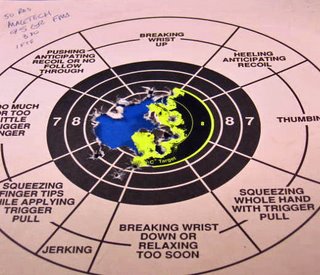 After the problems with the Cor-Bon I was worried that something was actually broken. I then purchased a box of Magtech 95 grain full metal jacket ammo which showed good accuracy and I only encountered 1 failure to feed malfunction.

.380 Conclusion:
For carry purposes I will probably load the Black Hills ammo, but would have no problems using the Winchester Silvertip as well. Both are accurate and both functioned flawlessly in my PPK/S.
Posted by Average Joe's Handgun Reviews at 7:00 PM