This week we take a look at a very well made pocket pistol, the Rohrbaugh R9 and compare it with the pocket gun standard the Smith & Wesson “J” frame revolver, this one being a model 340 PD. First let’s take a look at the comparables:

Rohrbaugh R9s versus S&W 340 PD
Function: semi-automatic pistol versus revolver
Caliber: 9mm versus 357 Magnum
Action: Both are Double Action Only
Capacity: 7 versus 5
Barrel Length: 2.9 in versus 1 7/8 in
Weight: 14.3 oz versus 12oz
Length: 5.2 in versus 6 3/8 in
Sights: Minimal fixed versus Fixed with Hi-Viz front
Grips: Carbon Fiber versus Rubber
Material: Stainless Steel & Aircraft Aluminum versus Scandium Alloy,
Titanium/Stainless Steel

The R9 (without sights) and R9s (with sights and reviewed here) are the smallest 9mm pistols available. The R9 is basically the same size as the Kel-Tec P-3AT .380 ACP pistol with the Rohrbaugh being a scant inch longer, .042 inches wider, .2 inches taller, and 6 ounces heavier. Rohrbaugh looked at the concealed pistol market and knew that if he was going to compete he would have to come up with something better than the micro .380’s produced by Kel-Tec, North American Arms, and Seecamp. As a lot of people think a .380 is too small a caliber for self defense he worked for many years to build a micro 9MM pistol. The one thing that will strike you as you look over the Rohrbaugh…it is an amazing well made pistol. The action is very smooth and the individual parts seem as if they were handfit.

Semi-automatic versus revolver?
In a pocket gun who cares? Individual shooters may have a bias one way or the other but in a handgun of this size it is not really important. In terms of these two firearms the Rohrbaugh is finicky regarding ammunition. I had read about this on the Rohrbaugh Internet Forum and it initially did not surprise me. When engineering something so small with such tight tolerances there are bound to be some minute differences in ammunition that may cause problems. Many may remember when Mr. Seecamp brought out his micro .32 ACP many years ago he informed the buyer that it would only function with Winchester Silvertip ammunition. My surprise with the Rohrbaugh is that there seems to be no particular standard; every person who posted on the internet had a Rohrbaugh that functioned differently with different ammunition. Mine both fed and shot well with Hornady 124 grain HP-XTP ammunition. 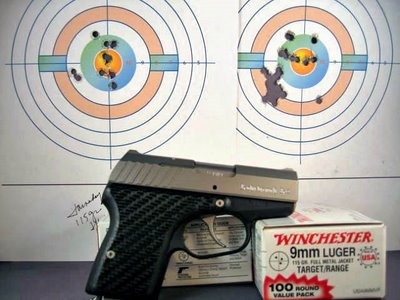 It did not like Federal, Winchester, and Remington ammunition which resulted in failure to feed jams. 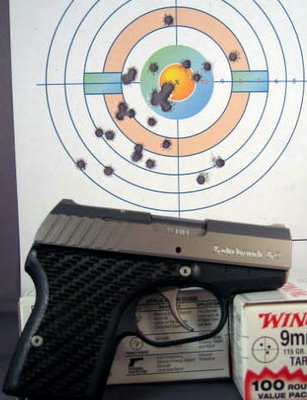 additional problem was the Rohrbaugh’s grip length and magazine release. The grips only allowed me to get one and a half fingers around it. While the shorter grip makes the pistol easier to conceal it also made it more difficult to control during firing and less pleasant to shoot. Also the magazine release is a “European Style” catch mounted at the heal of the grip. While firing the magazine release catch bumped the heal of my hand disengaging the magazine at least once (occasionally twice) in each magazine fired. The magazine would release as the slide was retracting causing the magazine to fall about an inch. This meant that there was no round for the slide to pick up as it returned to the closed position. If you pulled the trigger again all you heard was a “click”. In fairness this did not happen when I was not wearing a shooting glove. However the pistol is fairly unpleasant to shoot without a glove so an intensive barehanded session to determine if this was only a problem when wearing a glove was not possible.

The Smith & Wesson, in terms of accuracy, did seem to favor the HSM 158 grain lead semi-wadcutter .38 Special and the Winchester 125 grain + P semi-jacketed hollowpoint ammunition. 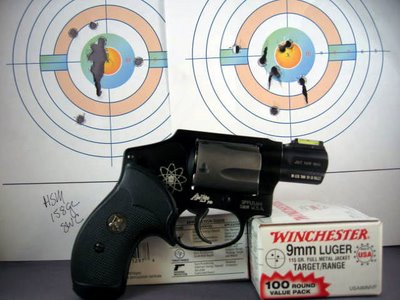 As would be expected there were no
(click on photo to enlarge image. Left: 10 rounds of HSM 158 grain SWC ammo fired at 10 feet. Right: the same ammo fired at 21 feet)

reliability problems with this revolver and the rubber after-market Pachmayr grips allowed me to get two a two and a half finger hold and the 340 PD was much more pleasant to shoot even with the + P ammo. 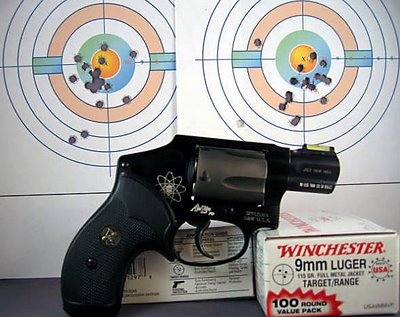 A lot of people on the internet do not like the fact that the Rohrbaugh’s slide does not stay back after the last round is fired. While I am used to the semi-auto’s slide locking in the rearward position after the last round is spent, the fact that the Rohrbaugh does not lock back is really a minimal problem. Somehow revolver shooters have been able to overcome this disadvantage for almost 200 years.

The double action only trigger pulls on both handguns were long but smooth and neither were a problem.

The sights on the Smith & Wesson definitely give it the advantage. The Rohrbaugh sights are barely visible. In fact the pistol is also available without sights which was its original configuration. The gun buying public wanted sights and Rohrbaugh, to his credit, gave them what they wanted. Being realistic, this is a highly concealable, arm’s length pistol. By that I mean that this handgun, like the Smith 340 PD, was designed for close quarter’s combat. I however, like the gun buying public, like sights on my guns even if they are “belly guns”.

Conclusion:
I have to go with the Smith & Wesson 340 PD. It weighs less than the Rohrbaugh, does not malfunction, and is more pleasant to shoot which means I will practice with it more often. I fear that, under stress, the Rohrbaugh would be harder to shoot causing a considerable drop in accuracy. I also fear that the slight grip might make the pistol easy to drop. While it would make the pistol less concealable I would like to see Rohrbaugh extend the grip by one more inch and use rubber instead of carbon fiber grip panels. This would add a round or two to the capacity and the extra length & rubber panels would allow me to get a better grip on the pistol. The long grip may also eliminate the problem with the magazine release as it would be more firmly settled in my hand. 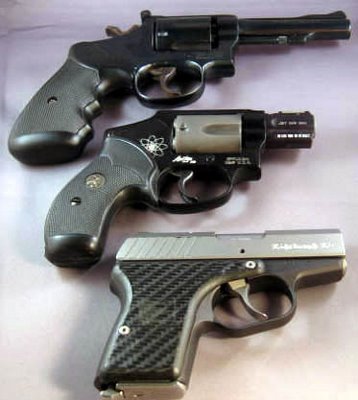 For now I’ll forgo the extra 2 rounds that the Rohrbaugh offers and continue to carry my Smith.