Not much is known about this pistol. I can find no information on the internet or in any of my reference books. Obviously it is a modified Model 70 which Beretta produced in .22 Long Rifle, 7.65mm (.32 ACP), and 9mm Short (.380 ACP). 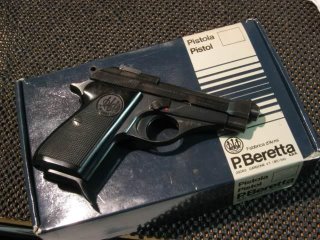 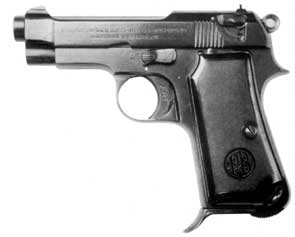 The Model 70 was also purchased in great quantities by the Mossad, the Israeli Secret Service. They favored the .22 Long Rifle version as an assasination weapon because it was flat and easy to conceal, accurate, and had a low report when fired. The model 70 was manufactured from 1958 through 1985 and replaced by the model 84, 85, and 87.

The Model 100 is obviously a target version of the Model 70. The differences are the much longer 5.9 inch barrel, adjustable target sights, and longer grip frame. The magazine holds 9 rounds with one in the chamber giving the shooter a total of ten rounds. The magazine curiously also contains a finger extension which, due to the longer grip frame, is totally unnecessary. The grips are wrap-around plastic and are fine for their intended purpose. A set of contoured rubber replacement grip panels would be great, however rubber grips for this pistol and the Model 70 are not catalogued by any manufacturer and it is doubtful they ever were. 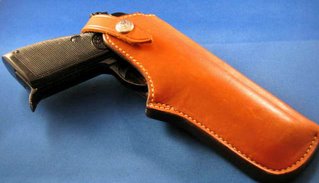 The Model 100 is a single action only with a slide safety on the left side of the frame right where you would want it to be. This is a very light weight aluminum framed pistol and dispite the length of the pistol it would be very easy to carry for extended periods. The Model 70 as well as this Model 100 began Beretta’s departure from the traditional European style heal mounted magazine release. The mag release on the Models 70 and 100 are on the left lower portion of the grip and look like the head of a large screw. While it is better than the heal mounted release, it does not have the ergonomic placement that John Browning designed for the Colt Model 1911 .45 semi-automatic pistol.

The Model 100 does offer good accuracy to which these 6.5 inch targets attest although I seemed to have a habit of throwing the first round low and to the left. The accuracy was assisted by the short, crisp trigger pull. All targets were all fired at 21 feet. 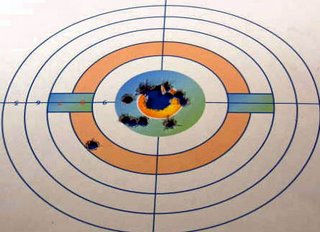 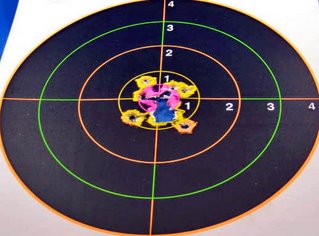 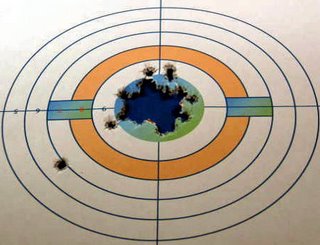 The .32 ACP is not a very powerful round for self defense although European military and police departments used it as such well into the 1970’s. This Model 100 did not care for Winchester Silvertips but did feed hollowpoints from Speer (Gold Dot) and (Federal Hydra Shok). While scoring low on the “Power Meter” the pistol does score very high on the “Coolness Meter”. The pistol has an exotic appearance and one can easily imagine James Bond going up against one of his fictional villains brandishing a Beretta 100.

Updated Information
Subsequent to the posting of this information I learned that the Model 70 was restricted from importation after the Gun Control Act of 1968. The GCA attempted to ban all imported handguns which were small enough for concealed carry. To get around this Beretta added the longer barrel, adjustable sights, and lengthened the grip frame to create the target configuration of the model 100. This allowed the Beretta to once again export the .32 ACP pistol into the U.S. Unfortunately, the model 100 did not turn out to be a huge seller.
Posted by Average Joe's Handgun Reviews at 10:46 PM