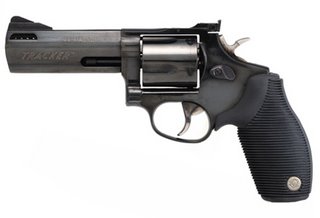 Company History
Tauras Manufacturing began as a producer of small tools in Porto Alegre, Brazil and manufactured their first revolver in 1941. In 1968 they began exporting firearms to the United States. Their entry into the US firearms market was fairly disrespected by the gun buying public. That began to change in the later part of the 1970's as their handguns came to bear a very close resemblence to Smith & Wesson .38 Special revolvers and Beretta 9mm semi-automatic pistols. This is because, in 1970, 54% of the company was purchased by the conglomerate Bangor Punta. That name may strike a familiar chord with those of you who were handgun afficiandos in those days as you will well remember that Bangor Punta also owned Smith & Wesson. In 1974 Beretta was contracted to supply their famous 9mm pistols to the Brazilian army. Part of the deal stipulated that Beretta produce them in Brazil. When the contract ran out Beretta sold the entire production facility to Taurus including the staff, drawings, and all manufacturing equipment. In the later part of the 1980's Taurus announced that their firearms now included a lifetime warantee and began to tweak their designs offering improvements and a style all their own. Taurus has always produced an economical firearm, but their revolvers and semi-automatic pistols are now renowned for quality, safety, and accuracy giving the gun buyer the best value for the money.

.44 Magnum Tracker Revolver
The Tracker is good packin' revolver as it is manufactured on the Taurus compact frame which gives it a capacity of 5 rounds. It comes in blue steel and is not too heavy weighing in at 34 ounces. The front sight is of the fixed red ramp variety and the rear sight is outlined in white and is fully adjustable for both windage and elevation. Even with hot full power magnum ammunition the revolver was comfortable to shoot due to the ported barrel, smooth & wide target trigger, and the Taurus "Ribber" grip. In my humble opinion Taurus makes the best revolver grip produced anywhere.

Shooting the Tracker
As mentioned above, the Tracker was very comfortable to shoot. Accuracy with .44 Special loads was good and, with the ported barrel and "ribber" grips, the revolver was absolutely no problem to shoot. 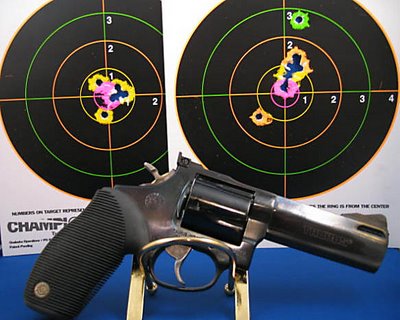 (click on image to enlarge photo)
All targets shown were set at 21 feet. The target on the left was fired at with 5 rounds of Winchester 240 grain semi-jacketed hollowpoint .44 magnum loads and the target on the right took 10 rounds of the same hot ammunition. 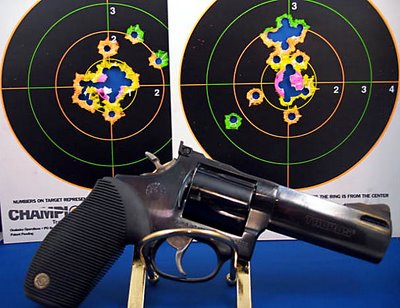 For everyday defense I would go with the 210 grain Winchester Silvertip ammo. It is slightly less powerful and therefore easier to shoot than the 240 grain bullets. However, if traversing the wilderness of Idaho I would feel very confident with the Winchester .240 grain ammunition which seemed to produce the best accuracy of the four loads tested.