Stay Tuned...Vanity Project In-Progress
I have always wanted to have a pistol, customized to my specifications, however most custom pistols and revolvers begin at close to $3 grand and go up. But now I have seized the opportunity to do one that I will really like, for a fraction of the price. How you ask? Well the pistol that I am starting with was handfit at the Colt factory before Colt discontinued making them in 1945. Therefore extensive hand-tuning doesn't need to be done. Well then, a discontinued Colt, especially one that was handfit at the factory would be rather costly, right? Well yes. In fairly good condition they run about $500. Add to the fact that the caliber I was looking for was only produced in small numbers and that would push it to around $700. In great condition a they run close to a grand and special engraving or military marked models will propel the price close to the $3 grand mark again. But this one was very cheap because it was in pretty lousy shape. Have you figured out what I am talking about? It is a Colt Pocket Hammerless in .380 ACP. This one is in bare bones condition, which is just what you would want if you are going to customize. I already own 2 of them; one in .32 ACP, the Model 1903, and one in .380 ACP, the Model 1908. However, they are in such good condition that they have too much collector value to mess with them. The one I just purchased doesn't have much collector value...yet. 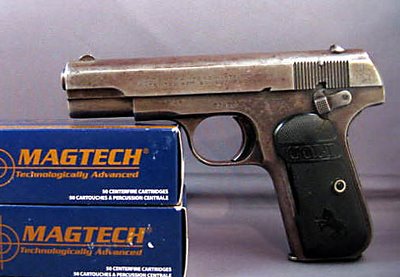 As you can see, this one doesn't have a patch of original bluing left on it and has developed gray-brown patina. The left grip panel has a huge chip out of it and a long, wide crack. The slide safety is so loose that the wind could blow it 180 degrees if the grip wasn't there.

So, some of the modifications are pretty obvious. 1. The pistol needs to be reblued. 2. The slide safety needs to be replaced. 3. The grips need to be replaced (and while new replacement grips have been manufactured from the originaly Colt castings, the gunsmith that will be doing the work has a set of vintage J. Scott Mother-of-Pearl grips that will set this piece off beautifully). 4. The recoil spring needs to be replaced (since the serial number puts this pistol as having a manufacturing date of 1922, it's probably time to change the spring). The real customization of this piece will be new sights. As was the fashion at the time, these pistols were made with what can only be politely described as "nominal" sights. This is one of the most perfect pistols ever produced, the only things wrong are the minimal sights and the fact that the magazine release is on the heal of the grip instead the 1911 type button release just behind the trigger on the left grip frame. The gunsmith showed me a set of low profile 1911 3-dot sights that will do nicely. As for the magazine release...I'll live with it where it is. To have it removed and a 1911 style rebuilt into the grip frame would cost too much and I have only seen one Colt Pocket Hammerless (in a magazine) with that modification. The last piece that we were looking at replacing is the barrel. While the rifling in this barrel is very good, there is some erosion and what appears to be a slight ring about a third of the way up from the chamber. Not to worry, plenty of replacement barrels are out there.

I then shot the pistol so see if it functioned OK. The pistol functioned flawlessly. I put 100 rounds through it with no problems. 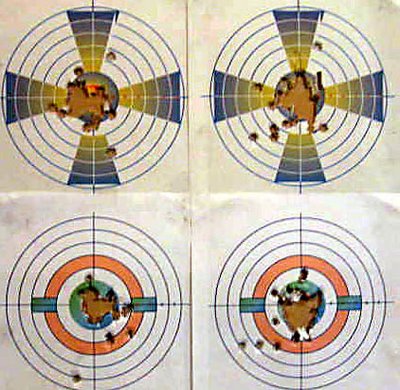 And...the accuracy is top notch as shown in these targets which were set at 21 feet. 25 rounds were fired at each target. The accuracy is so good that the original barrel is staying; erosion, barrel ring and all. If it ain't broke, don't fix it. These targets are not bad for an 84 year old pistol in poor shape with almost non-existant sights! This is a true testiment to the genius of John M. Browning's design and the manufacturing standards that Colt used to have.

So stay tuned! These are the "before" shots and I can't wait to show you the "after" photos.
Posted by Average Joe's Handgun Reviews at 9:19 PM