Advanced Laser Weaponry
The advent of a War always brings about new technology. Afterall, war is a very violent form of competition and out of competition comes ingenuity, innovation, and achievement. It is no surprise then that the "bar has been raised" for "State of the Art" close quarter combat technologies in the last 16 years. Two Gulf Wars have seen the enhancement of missle and bombing delivery systems but little news has trickled out about advancements in hand-held anti-personnel arms. Last week I was priviledged to attend a hush-hush training session in Southern California which gave me a strong glimpse at what the wizards of weaponry have been working on.

Advanced Laser Technology:
Because of it's precise properties Laser Beam technology has been used in everything from presentation pointers, to carpenter's levels, to advanced sighting systems for handguns, rifles, and missle systems. The thought of the Laser as a weapon has been a sci-fi staple since Flash Gordon was first issued his "Ray Gun" all the way to the light sabers used in "Star Wars". However, the fantasy is now a devastating reality.

Our instruction on the new weapons system was very basic and, quite frankly, there was not much need to over complicate matters. The military has long been looking for ways to simplify small arms training and, as seen in the Manual of Arms below, this has been achieved with astounding success: 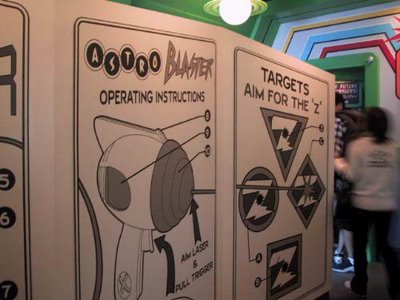 Now I fully understand the necessity of keeping things simple, but I do balk at the moniker of "Astro Blaster" which the military has bestowed upon this new weapon. I just feel that this has "dumbed down" the training concept a little too far. Although, with the military's penchant for acronyms "ASTRO" actually might stand for some long-winded military title like "Advanced Systems To Reduce Opposition"...or something along those lines. After going over the printed manual, a brief indoctrination was given by one of the instructors and then it was off to the combat range to begin the training. The instruction session was hardly necessary as this is an instinctive point and shoot weapon with no safeties or other external controls with which to contend. My youngest daughter accompanied me on this trip and she had absolutely no problem with the "Astro Blaster" in terms of operation or recoil. 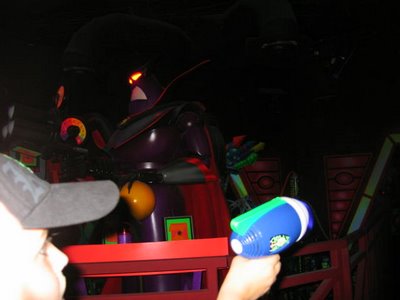 It would be appropriate at this point to discuss what I liked and disliked about this weapon. The Blaster's exterior components are made of polymer, which I normally do not like, however the polymer construction has certainly made this a light-weight weapon. 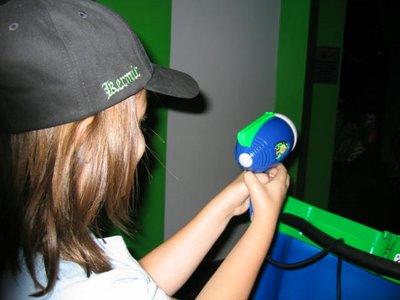 Unfortunately the Blaster is rather bulky so the light-weight does not translate into making this a good weapon for concealled carry. This is definately a service pistol and quite frankly, that is what is was designed to be. The lack of recoil makes follow-up shots very easy and the fixed sights seemed to be fairly well regulated. Unfortunately the puny sights were difficult to immediately read and this made accurate first shots very difficult. Most of the people involved in the training session opted to used a modified point-shooting style, see where the first shot (or blast) hit and then compensate on their follow-up shot for windage and elevation. Due to the red laser beam it is easy to see where the first shot landed and, as a plus, the white circle at the rear of the Blaster indicates when it senses that you have scored a direct hit by flashing a short red strobe. While there is a lot to like about the Blaster I must point out that the trigger is horrible. It is very spongy and therefore may cause the shooter to jerk the trigger finger causing the muzzle to be pulled down and to the right. This is probably a factor caused by the fact that this weapon is so new that the makers were not sure how to contruct the trigger or firing mechanism. After, the trigger on the Blaster is not cocking and dropping a hammer or otherwise propelling a firing pin forward. When pressed the trigger actually completes an electrical circuit which generates the laser blast.

Overall the Blaster has great potential, but could stand further refinement in terms of sighting and the trigger. As I said earlier, my daughter had no problems with it...although I smoked her in competition. 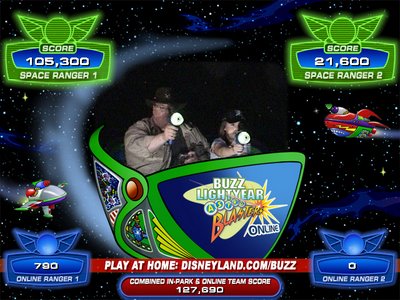