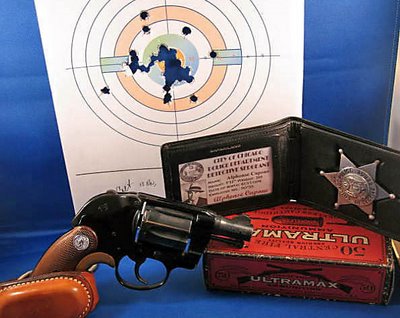 The Colt Cobra .38 Special revolver is a small, short or snub-nose barrelled revolver produced by the Colt Firearms Company.

The revolver is the same overall size and configuration as the Colt's famous Detective's Special. The difference is that the weight of the Cobra is much lighter than the Detective Special. The Detective Special was constructed entirely of steel whereas the Cobra has a steel cylinder and barrel but the frame is made of an alluminum alloy. While very well manufactured the Cobra should be considered a vintage handgun. Colt stopped producing the Cobra long before the advent and extreme popularity of .38 Special + P high velocity ammunition and the high pressures to which these cartridges are loaded could stretch or otherwise damage the alluminum alloy frame.

As could be expected from a small revolver of this type and vintage it contains fixed sights. The front sight is a semi-ramp and the rear sight groove is shallow and wide enough to allow for a pretty good sight picture. As this is an earlier model there is no shroud covering the ejector rod however the original owner did order this revolver with the factory installed hammer shroud. This would enhance the ability to draw the revolver from a pocket without the hammer catching on the pocket, coat, or jacket. This older model Cobra also contains Colt's smaller walnut grips. The lack of the ejector rod shroud and smaller grips certainly give this piece it's "classic-vintage" appearance, however the smaller grips make the revolver more difficult to hold when shooting. Therefore the original owner attached a gold annodized Tyler-T grip adapter which fills in the gap at the top of the gripframe and provides a nice finger groove. One of the great things about acquiring a vintage Colt firearm, especially one that is in good condition, is the fact that they were made in the days when the manufacturing craftsmen took pride in their work and the company was dead-set on producing firearms of the highest quality. As such the trigger pull in both single and double action are very smooth. 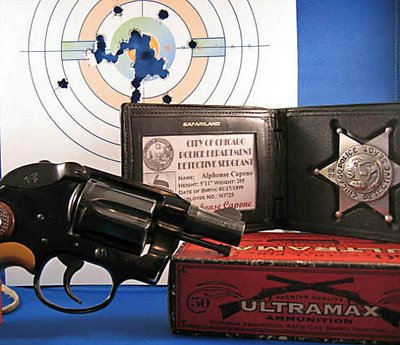 Shooting the Cobra with standard pressure ammunition was not problem. This target was set at 21 feet and fired at with 18 rounds of 158 grain semi-wadcutter lead ammunition which is the type ammunition that this revolver was designed to use. Accurary was actually very good for a light-weight, short barreled handgun.

Both the Colt Detective Special and the Colt Cobra were favored by plain-clothes police officers because they were easy to conceal and held six rounds as opposed to the five round capacity of the Smith & Wesson snub-nosed revolvers. While the Cobra was carried by many a police detective, it's claim to fame is undoubted the fact that Jack Ruby used a Cobra .38 Special (serial number 2744 LW) to kill presidential assassin Lee Harvy Oswald in the basement garage of the Dallas police station.
Posted by Average Joe's Handgun Reviews at 9:44 PM