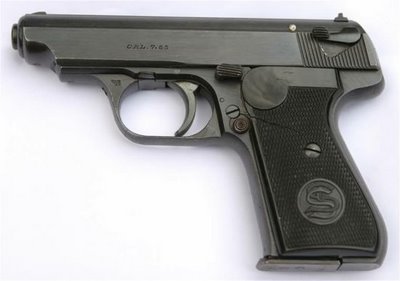 The JP Sauer & Son Model 38H is a 7.65 mm (.32 ACP) caliber fixed barrel blowback operated semi-automatic pistol with a magazine capacity of 8 rounds. While rather plain and unremarkable looking it contained all of the bells and whistles available at that time and one refinement that has never been seen since.
Sauer & Son were in stiff competition with Mauser and Walther in the small pocket-pistol market when they developed the Model 38H. At the outset of WWII the pistol was issued to German police units as well as some 200,000 being ordered for the Wehrmacht (Army) and Luftwaffe (Air Force).

The pistol has the rudimentary small front blade sight and U-shaped rear sight that were very common for the time of manufacture. The safety lever is mounted on the left rear of the slide. The 38H has a loaded chamber indicator in the form of a pin which sticks out at the rear of the slide when a round had been loaded. There is a frame-mounted magazine release button on the left side just to the lower right of the trigger guard and this is somewhat unusual for a European pistol at this time as most employed a magazine catch on the heal of the grip. Now for the real innovation. The Sauer 38H was the first pistol to have a decocker lever which is mounted on the left side just in front of the grip. While decocking levers have become somewhat standard, especially on the SIG-Sauer pistols (the firm that Sauer & Son eventually merged into), this one was the first and...not only is it a decocker, but it is also a recocker. This pistol offered the owner a lot of options. It could be carried cocked and locked in the single action mode. It could be decocked and carried in the traditional double action mode (double action for the first shot and single action for the remaining rounds). And finally, it could be carried decocked in the double action mode and recocked into the single action mode before firing. As the War rolled on Sauer eventually eliminated the safety level as it was rather redundent and late in the War they removed the decocking lever as well.

The Sauer Model 38H was supposedly favored by the paratroop units of the Luftwaffe for its small size. As German troops carried their pistols in cross-draw holsters one can certainly imagine that a large Walther P-38 Service Pistol or Luger P-08 could be quite uncomfortable as the paratroopers made their landing. However, what does not make a lot of sense here is that upon landing the Sauer 38H was the only firearm to which the paratrooper had immediate access. Unlike the Allied airborne troops the Luftwaffe paratroopers jumped into occupied territory without their primary weapon. Their Mauser 98 bolt action rifles and MP40 submachine guns were dropped seperately in special containers. So upon landing, until they could find the weapons container, the German Paratrooper was armed with a .32 caliber pistol with one spare magazine for a total of 16 rounds. This may account for the fact that I have never heard any tales of daring deeds accomplished by the Luftwaffe Paratroop Corps. OK...they rescued Mussolini after being overthrown, but by then the Italian army's tactical emphasis was on surrendering to Allied troops so I am not sure it was much of an accomplishment.

So how effective was the pistol that the Luftwaffe hit the ground with? 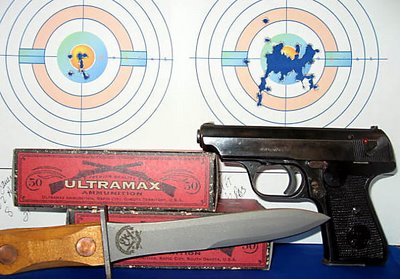 Well, my specimen had plenty of accuracy. (click photo to enlarge)

Show here are two targets placed at 21 feet. (Also shown is an Ek commando knife.) The target on the left was fired at with a full magazine of 8 rounds while the target on the right took 42 rounds. This shows plenty of accuracy for normal defensive encounters in an urban environment, but this was war! How good was this pistol at any distance? Well the next target was placed at 25 yards (75 feet) to see how the 38H would perform. 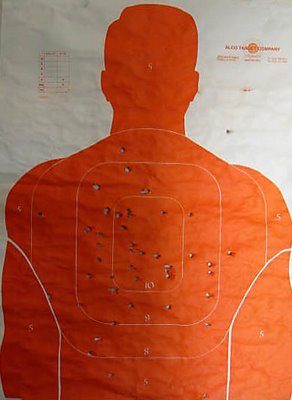 I fired a full box (50 rounds) of 71 grain FMJ bullets at this target with only one flyer going above the right shoulder. The other 49 rounds hit home with the majority of them landing in the 9 and 10 ring.

While the accuracy is pretty darn good for a pocket pistol the .32 jacketed bullets are not really all that potent. Fortunately my pistol also handled hollowpoints (Winchester Silvertips and Federal Hyda-Shok bullets) without a problem. In fact, there were no malfunctions in the 200+ rounds I put through this pistol.
Posted by Average Joe's Handgun Reviews at 7:50 PM