In this Range Report we compare the Para Ordnance Tac-4 with the Ruger P-345. The photo of the Tac-4 listed below was copied off of Para Ordnance's website due to the fact that I do not own one. The Tac-4 shot for this report was a range rental so it's performance was affected by the fact that it appeared to have had about 5,000 rounds through it without being cleaned. The front inch of the slide was more thoroughly blackened than a piece of Paul Prudhomme's cajun redfish. In fact, the carbon residue completely obliterated the white dot on the front sight. 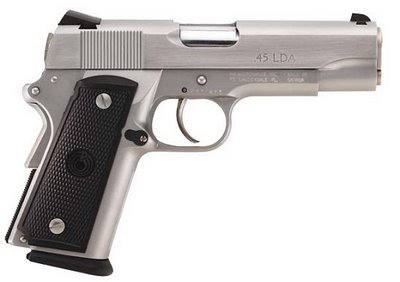 The Tac-4 is a Commander sized 1911 copy with the primary difference being the Para Ordnance exclusive LDA (Light Double Action) trigger. As a 1911 purist I shunned the LDA trigger for many years. My motto was "Give me a single-action or give me death". However, as society has become more and more litigious to the point of absurdity, I have been more open to examining double action pistols as a factor to limit the liability of a possible accidental discharge by the light pull on a single action semi-automatic pistol. As I have looked at double action semi-automatics I have certainly seen some pretty heavy and horrid trigger actions. So bad that I would be worried that the long and heavy pull might cause me to throw a shot wide and miss the target completely. The liability of a wild shot could be just as bad as an accidental discharge.

I should have examined the LDA pistols earlier. (Actually I might have if they had taken my idea for the name. If you remember, when Para Ordnance was launching their new double action pistol, they held a contest to determine the name. They touted it as being light, fast and firing the venerable .45 ACP cartridge. I offered the moniker "Thunder and Lighting" and well...they opted for Light Double Action.)

The Tac-4 is a double stack pistol with a capacity of 13 + 1. I thought I would not like a double stack 1911 but, just like the LDA trigger, the double stack is actually pretty good. Obviously it puts 5 more rounds in the pistol and, the extra width of the grip frame actually distributes the recoil energy over a larger area causing less perceived recoil. 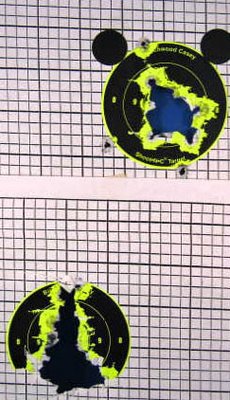 The accuracy of the Tac-4 LDA is fantastic. The trigger pull does not cause the shooter to flinch. This is another pistol that I have become very fond of (this is the second time I have rented it).

I have always been a fan of Ruger's revolvers, especially their single action revolvers. Their .22 caliber semi-auto pistols and the 10/22 rimfire rifle are staples in the firearms industry and every shooter's battery usually contains at least one. I have never had much use, however, for their centerfire pistols. While they have a reputation for accuracy, reliability, and ruggedness the are...not much to look at and rather chunky or bulkey. It appears that Ruger took this into consideration as they designed the P345. The slide is similar to slides of other Ruger centerfire pistols, however the stainless steel version is matte on the top and polished in places on the sides. All of this makes it just a little more handsome. Ruger really put some design effort into the grip frame. It is black polymer, of which I am not a fan, but they executed it well. The grip area is contoured for the thumbs and palms and the panels are nicely checkered. The grip is rather slender and I wonder how the handling characteristics of this pistol might change if the magazine (which is a standard 8 rounder) was widened slightly to make room for a double stack of .45 ACP ammunition. The feel of the grip could also be improved by inserting checkered rubber panels in place of the checkered polymer panels. This pistol is of the traditional double action variety (double action for the first shot and single action for every shot there after). 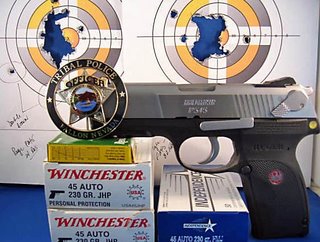 The sights are of the three dot style with the rear sight be very low profile. Even so the sights provide a more than adequate sight picture.

All operating levers are in their traditional places and my only issue is with the safety/decocking lever. Ruger has apparently done whatever they could to make the pistol easy to conceal. All edges have been rounded, the pistol's weight is only 29 ounces. The safety/decocking lever is very flat and while that makes the pistol easier to conceal it makes the safety/decocker a little more difficult to move with your thumb. However this is a minor complaint. My major issue with this handgun is the stiff double action pull. The Para Ordnance LDA trigger is certainly much better, however other manufacturers, such as CZ, have been able to produce traditional double action pistols that provide a longer double action pull that does not have a negative affect on accuracy. On the positive side, the Ruger P345 can be had for around $400.00 or less than half of the price of a Para Ordnance Tac-4 LDA pistol. That makes the Ruger that much more attractive!
Posted by Average Joe's Handgun Reviews at 4:12 PM