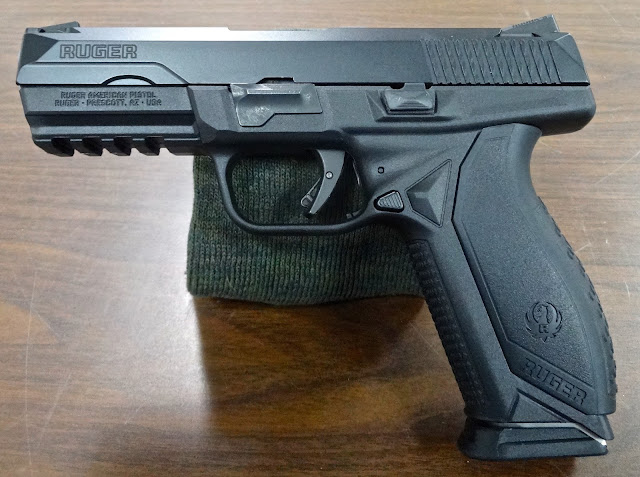 With minor fanfare Ruger has strategically introduced the new Ruger American pistol just prior to the industry's trade show, the SHOT Show, held each January in Las Vegas.  Most manufacturers wait until the SHOT Show to unveil their new offerings but Ruger typically puts out a new item about 30 days prior.  The reason for doing this is a rather elementary marketing strategy.  Other competitors will be showcasing their new pistol ats the show.  But by putting the American out a month earlier Ruger builds media awareness and consumer interest for their product before the marketplace is glutted with new firearms.  Also, every consumer who buys the Ruger American prior to the SHOT Show is someone who will probably not buy a pistol from the competition when they hit the market a month later.

Although beauty is in the hands of the beholder I do not find this pistol to be very handsome however, it does look like it means business and that is the statement I want my defensive pistol to make.  The American is currently chambered only in 9mm (tested) or .45 ACP.  However, if the demand is there I am sure that Ruger will produce a .40 S&W version.  The 9mm American has a magazine capacity of 17 rounds and is a rather large pistol with an overall length of 7.5 inches and a weight of 30 ounces.  The pistol has a fairly low bore axis which helps with muzzle flip.  In fact, neither muzzle flip nor recoil were much of an issue with this new pistol.  It was very comfortable to shoot; a fact I was very interested in as a reader had corresponded to me that the pistol chewed up his his middle finger knuckle and the web of his hand. My time with the pistol did not confirm any such problems.  Ruger's specifications stated that the trigger pulls are designed to break at 6.3 pounds.  My test pistol's trigger averaged 7.14 pounds as measured by my Lyman digital scale and the slightly heavier pull was unnoticeable in my evaluation. 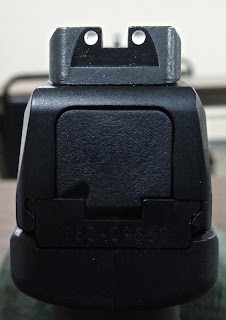 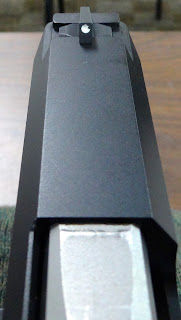 Both the front and rear sight are dovetailed in place making lateral adjustments as well as sight replacement an easy process.

Ruger also incorporated a modular, wrap around grip system that can change the palm swell and trigger reach. 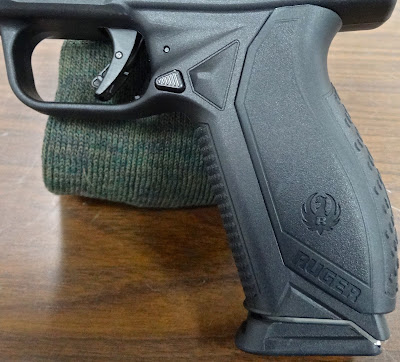 The curved backstrap is a feature that I appreciate as it assists in the acquisition of a comfortable grip.  The area where the trigger guard meets the grip is very generously undercut which prevents the pistol from rapping your middle knuckle during recoil (more commonly known as "Glock Knuckle") which, again, puzzles me about the reader who found this to be a problem.

The take down process is very simple: 1. Lock the slide back which should eject any chambered round. 2. Remove the magazine.  3. Check again to insure that the chamber is empty.  4. While the slide remains locked open the semi-circle cut-out in the slide should be positioned directly over the take down lever's retention pin.  Simply rotate the take-down lever downward until it stops and the slide can be pushed forward and off of the frame. 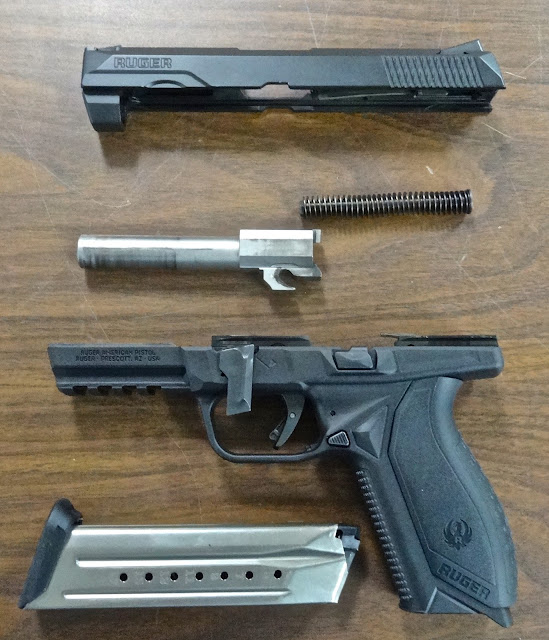 5. From that point you just remove the recoil spring and barrel from the slide and the pistol is adequately stripped for cleaning.  On the plus side of the take-down process, the trigger does not need to be pulled to release the slide nor are any special tools required to disassemble the pistol.

Another plus on this pistol is that the two included steel magazines are nickel-teflon coated to make insertion easier and extraction faster.

Both the back strap and front strap have diamond checkering molded into the grip frame to provide a firm hold on the pistol. 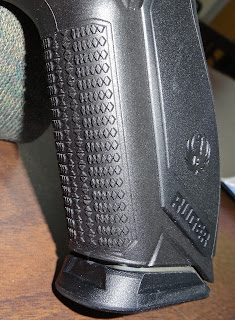 The side panels of the grip have appropriately less aggressive textures.

The grip fit my hand very well and shooting full metal jacket 115 grain and 124 grain ammunition from MagTech and Federal were absolutely no problem.  Here are the targets. 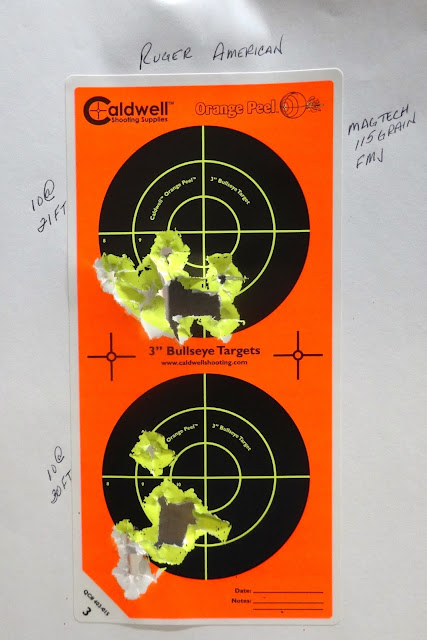 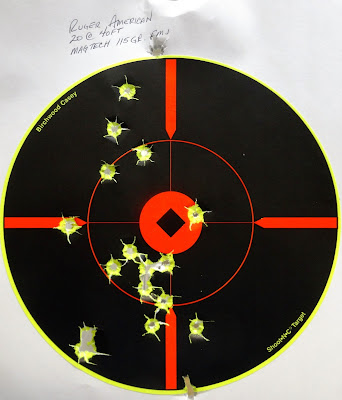 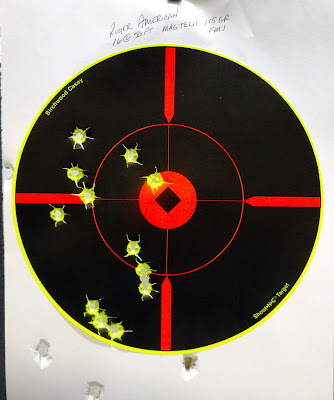 This final target was run out to 50 feet and shot with my last 16 rounds.

I have a suspicion that Ruger produced the American for the Government trials as well as the consumer market.  Consumers are always looking for the next new gun and the U.S. Government is looking for new pistols for both the military as well as some of the Federal Law Enforcement agencies.  The Ruger seems to fit the Government's requested specifications for a high capacity pistol that is ambidextrous (both the slide stop and the magazine release button can be accessed from either side of the pistol), is modular and can be taken apart and put back together within two minutes without the need of any special tools.

I would not hesitate to recommend this pistol for anyone looking for a range or home defense pistol. 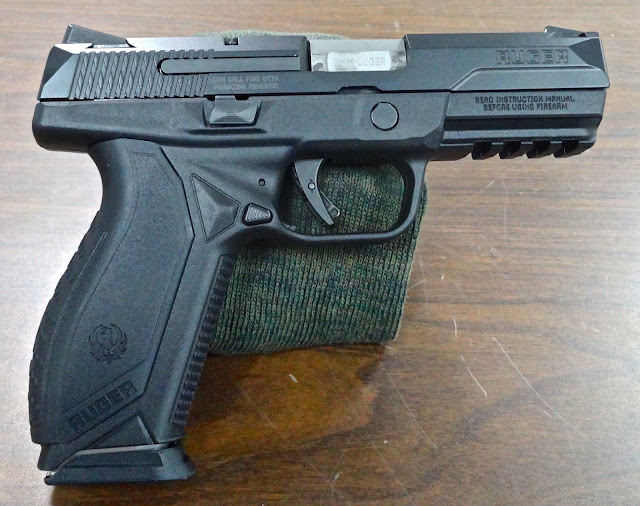 Joe, actually, from the pictures, it looks like a fairly handsome pistol to me. I'm sure you are right about the government contract... it looks a bit large for concealed carry, perhaps about the size of a Glock 17. I'd be interested to see the almost assuredly upcoming compact versions.

There are videos out there comparing The American with SR9. The lineage is obviously there, so looks like Ruger weren't firing and re-hiding design engineers, which is at least something. They brought the gun more in line with what is expected of a service and home defense guns nowadasy.

Thanks for all the great firearm reviews over the years Joe. Your site has always provide a wealth of information to help me be a better informed firearms buyer. Looking forward to reading your reviews for many years to come!

Great review, I have the same gun and your review is very similar to my experience using it. Keep it up.