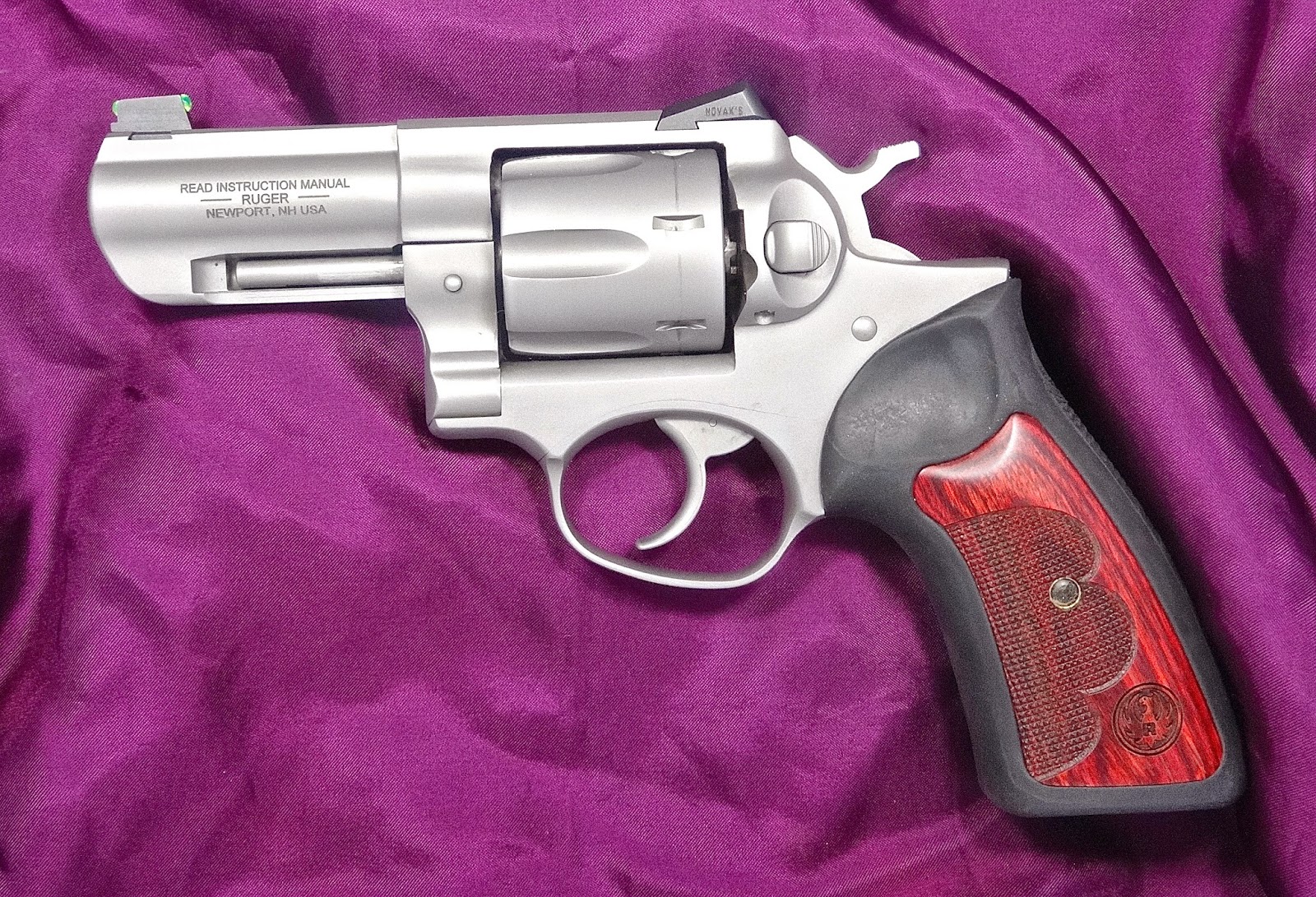 Ruger introduced the GP100 in the mid 1980's as a replacement for their Security Six/Police Service Six. The revolvers they replaced were built in the traditional Ruger "tough-as-nails" style.  While they were robust enough they came standard with rather small grips which required after-maket replacement to make them easier and more accurate to shoot.  The GP100 also went head to head with Smith & Wesson's "L" framed models, most notably the model 586 and 686.  The standard GP100 was produced in the tried and true .357 magnum chambering along with a very deep blue-black finish.  These were revolvers which were not only tough but impressively good looking. 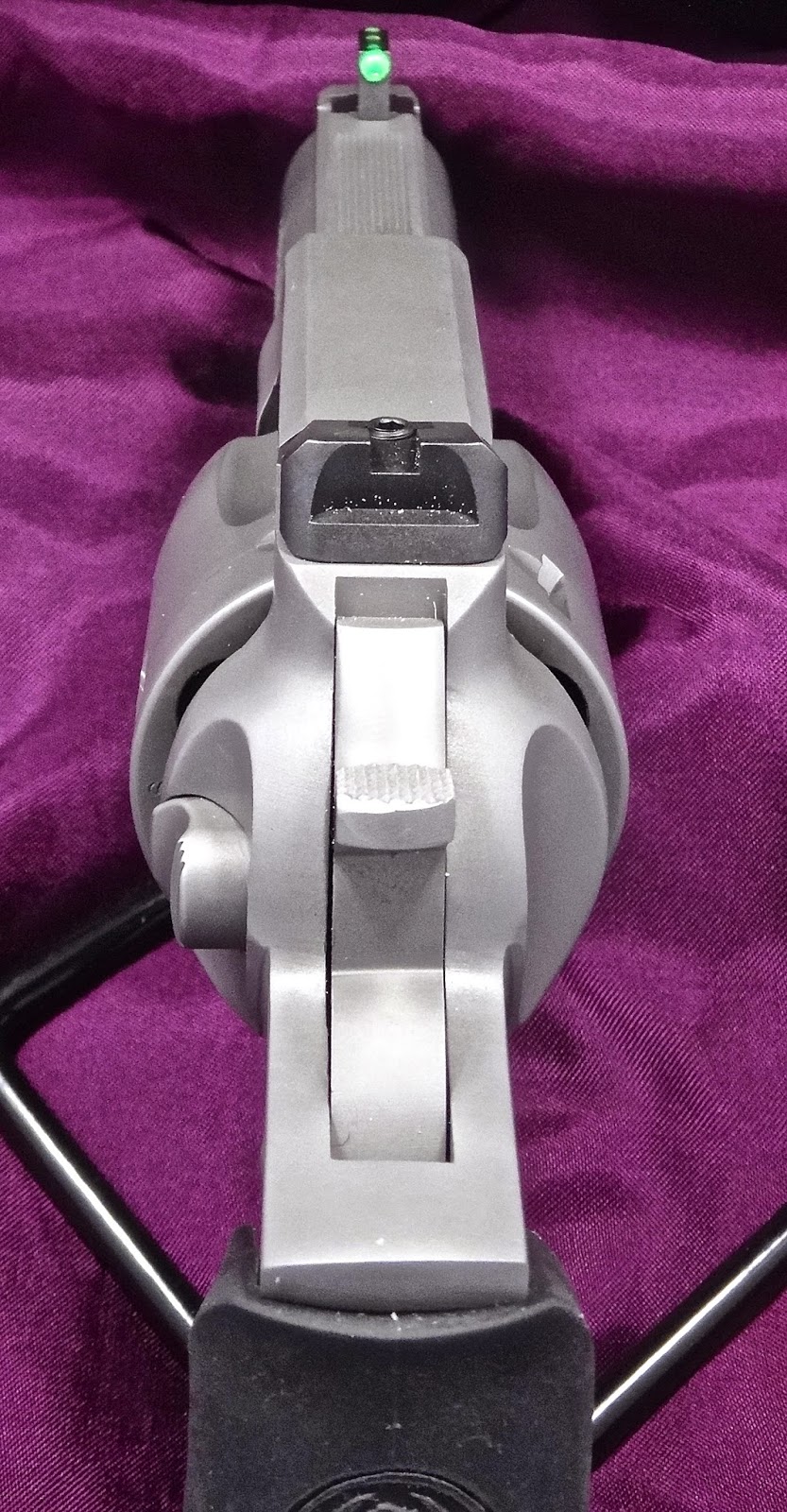 These sights are perfect for people such as myself who suffer from aging eyes.  Lately when I stare down a front sight I frequent see two of them except firearms with a fiber optic front sight.  This sight arrangement is a life saver for those of us who are getting older.

As for other specifications the revolver has my favorite barrel length of 3 inches which makes it small enough to carry easily and large enough to shoot well.

The WC GP100 has an overall length of 8.5 inches, is affixed with black rubber grips with beautiful textured rosewood inserts and weighs 36 oz.  This is not a lightweight polymer revolver.  This baby is all stainless steel and weighs enough to make .38 Special +Ps a cream puff to shoot while making full powered .357 Magnums very manageable.

I found that this revolver likes the heavier bullets as shown on the targets below which were shot with Remington 158 grain lead hollow point .38 +P rounds  and Speer 158 grain Gold Dot Hollow Point .357 Magnum ammunition. 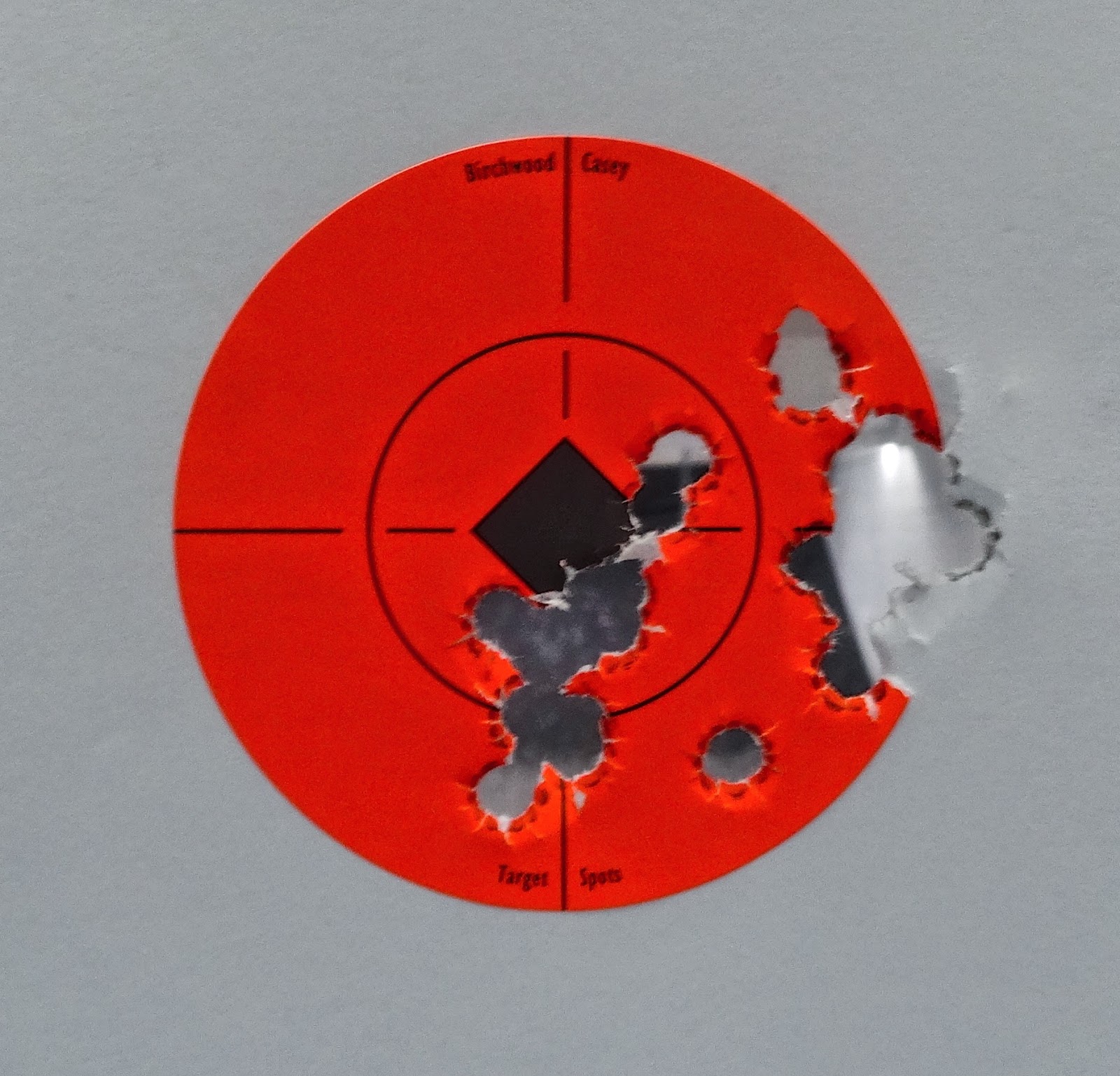 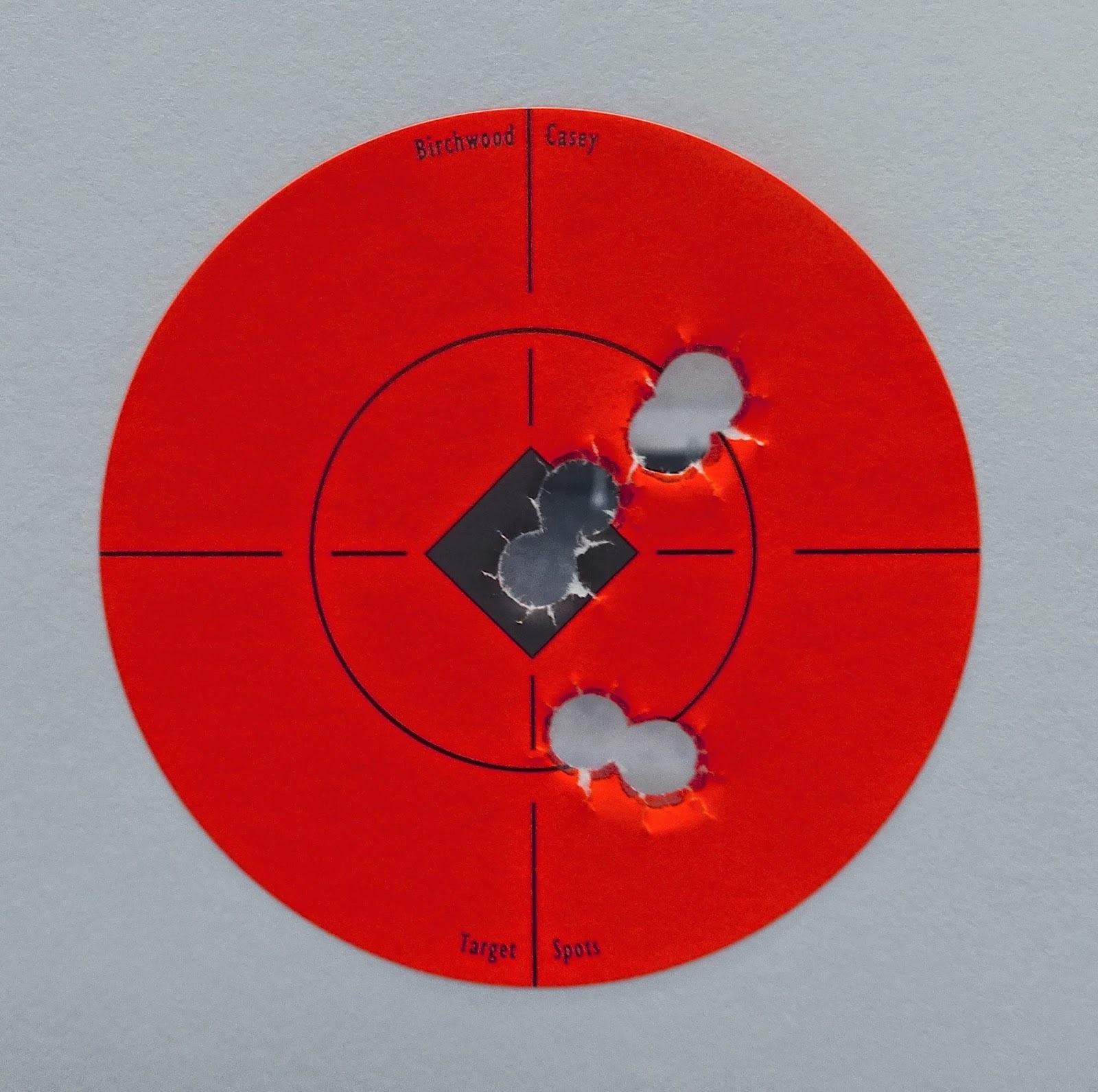 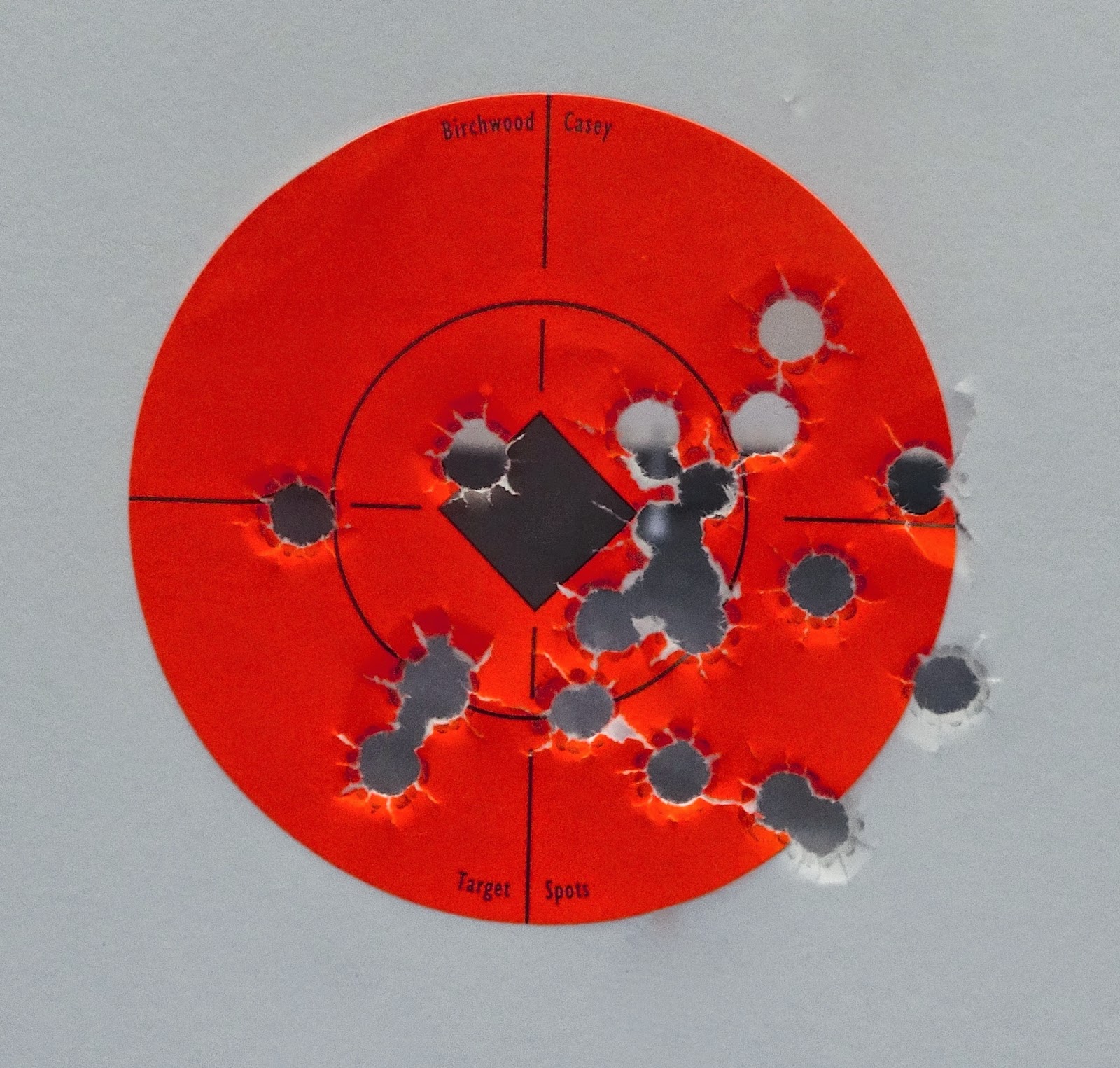 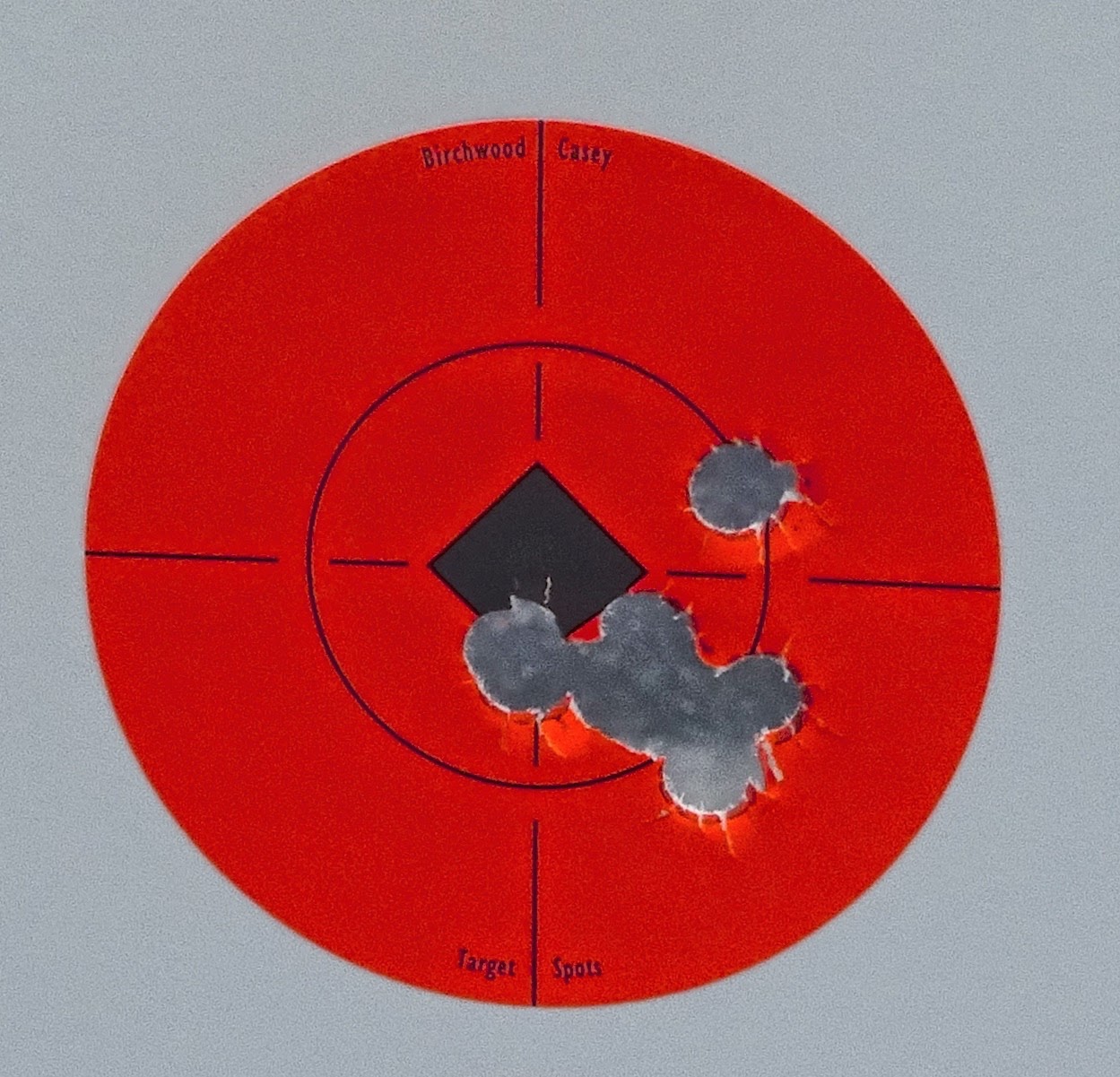 Here's a final photo of the WC GP100 in a Galco holster. 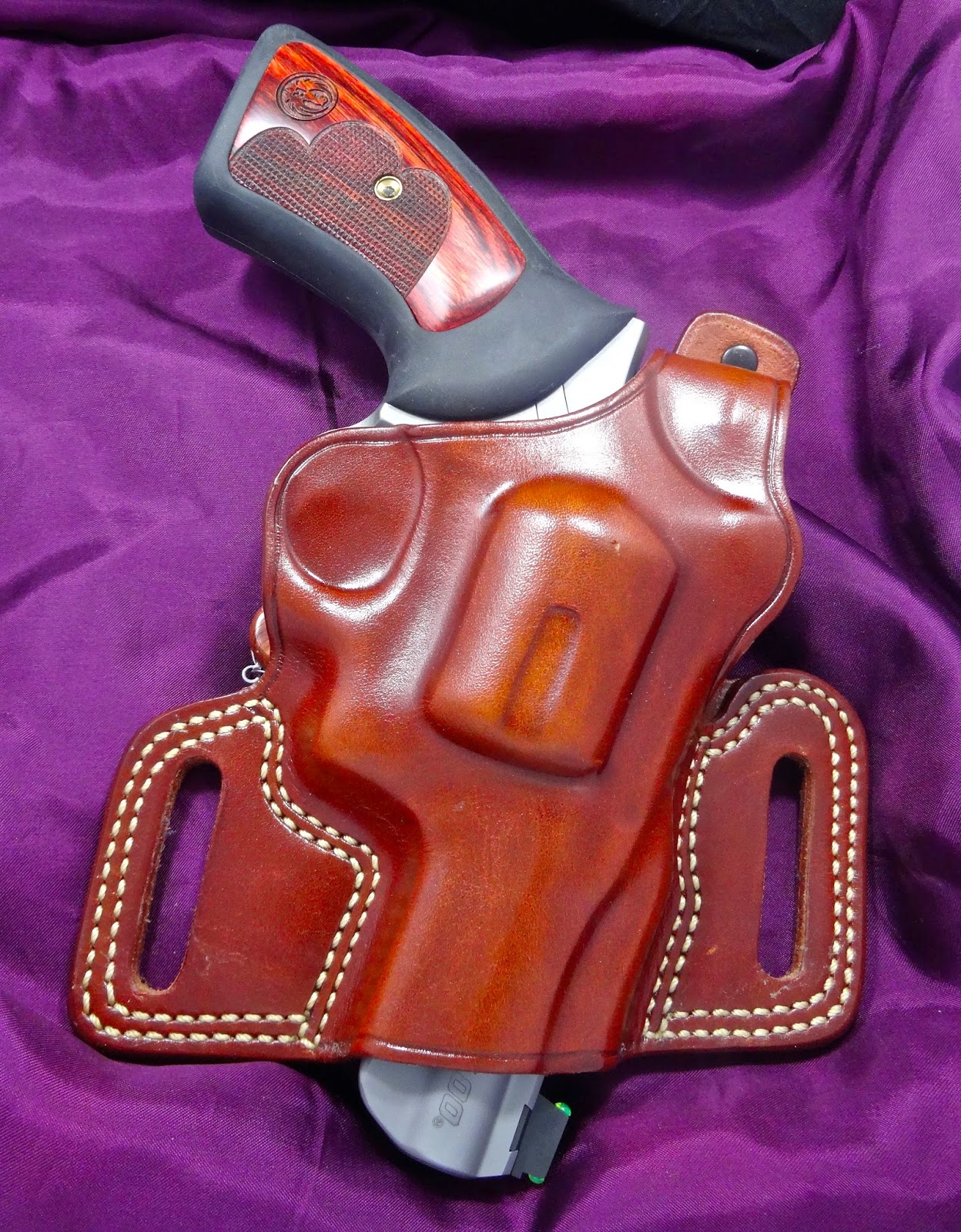 For any revolver fan the WC GP100 is an exciting addition to the revolver market.  It has a very smooth operation, great sights, and superb accuracy.  This is a limited (but fairly large) edition that is tuned up before leaving the factory and is much less expensive than anything coming from the Performance Center associated with their major competitor.

Whether you are looking for protection from two legged miscreants or the four legged predators that inhabit the woods and mountains of most of the U.S., the Wiley Clapp GP100 provides the power and accuracy to solve your protection problem.

Joe, I purchased one of these revolvers last week. I have 22 firearms, 6 of which are revolvers. I purchased the WC GP100 .357 from a dealer who also has an indoor range on-site. I shot it 10 minutes after the purchase. I'm truly in love with it! I have a Stainless 6" barrel GP100 .357. It's always been a favorite. But, this WC Edition is near perfection! I agree, it feels like an extension of my hand. Target acquisition is almost effortless. I, too, have those 'aging' eyes (55 years old, and am far-sighted). The wide notch rear, and fiber optic front sight are exactly what I need. The grips feel like they were custom-made for my hand. I like to have my hand as high up on the grip as possible. These grips are great for that, and make aiming quick and accurate. The trigger pull, in SA or DA, is beautiful. I found, as you did, that this revolver does like the hotter loads, and is more accurate with them. Recoil is manageable, and as I told a couple of friends, this is what a .357 Magnum should feel like---powerful, but manageable. Overall, this revolver has almost immediately become a top favorite. Everything about it is what a great, rugged, enjoyable revolver should be. Thanks for your review. I'm heading to the range today, to continue this love affair with this fantastic firearm.