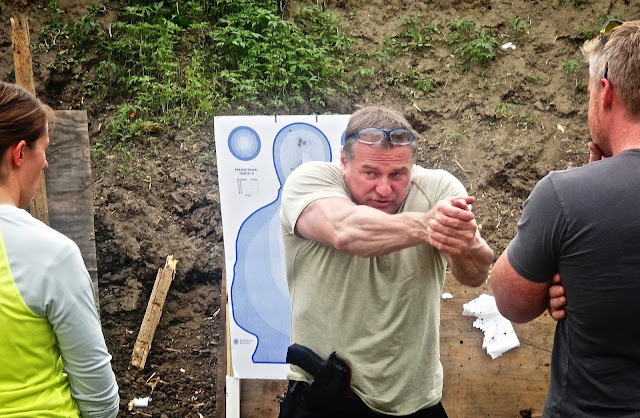 Instructor Mike Reilly demonstrating the proper technique for gripping and presenting the pistol.

On a dreary, drizzling day last Spring I was fortunate enough to attend Mike Reilly's entry level defensive handgun course.  This is a two hour session to introduce the shooter, who has completed the basic handgun safety class, to the elementary principles of defensive hand-gunnery.

As this was an entry level class the more advanced techniques of shooting from a barricade, shooting and moving from a seated position, room entry, handgun retention and force on force were not a part of the topics covered in this beginner's class.

The classes are kept small so that each student gets plenty of Mike's individual attention.  In this session there were three students: Matt and Jantipa who have some handgun shooting experience, and Heidi who had only fired a weapon in her handgun safety course.

After explaining how the class would be run, what would be covered and refreshing everyone on the appropriate safety topics Mike began the class by demonstrating the proper grip.  Once the group had acquired the proper grip skills Mike had them work on drawing from a concealed holster.

Mike demonstrates the "rip, grip and hip" sequence of drawing and attaining the proper stance.

Working from a concealed holster is an important skill to learn and many entry level courses do not include it considering it to be a more advanced skill.  However, this ignores the fact that many of these beginning students are already carrying their weapon in a concealed fashion.  Therefore it is important for them to learn the proper techniques for carrying and drawing their pistol earlier, rather than later. 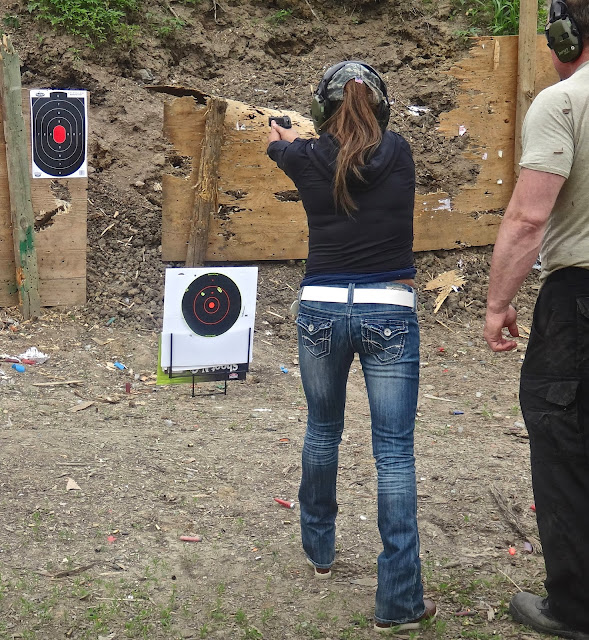 Jantipa puts her Ruger LC380 to good use (above and below) 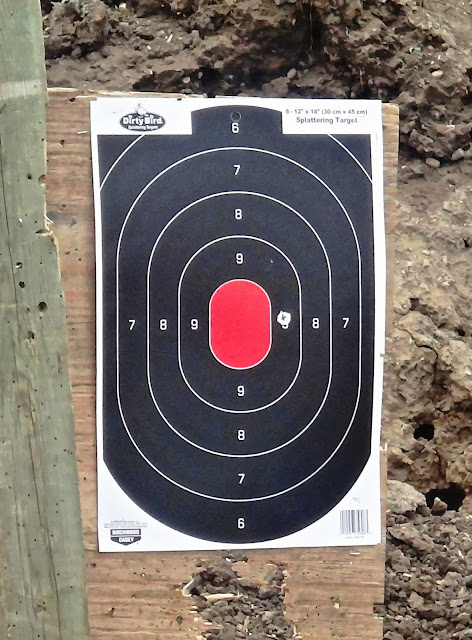 I was interested to see that Mike teaches shooting from a "boxer's stance" rather than the isosceles stance.  I prefer this as I feel it allows for more natural movement as opposed to having both feet planted in the parallel isosceles position. Mike's preference may be due to his extensive background in MMA fighting which gives him the experience to know what really works in real close quarters combat. 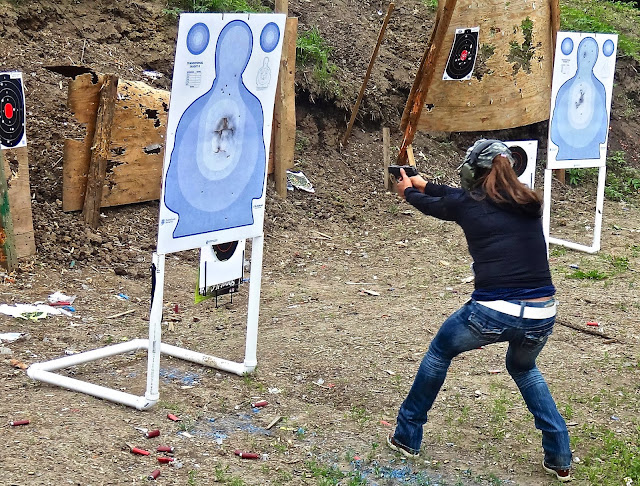 Heidi, shooting a S&W M&P in 9mm gets some private coaching on fundamentals and by the end of the session her backward lean is corrected producing some nice groups in the target below. 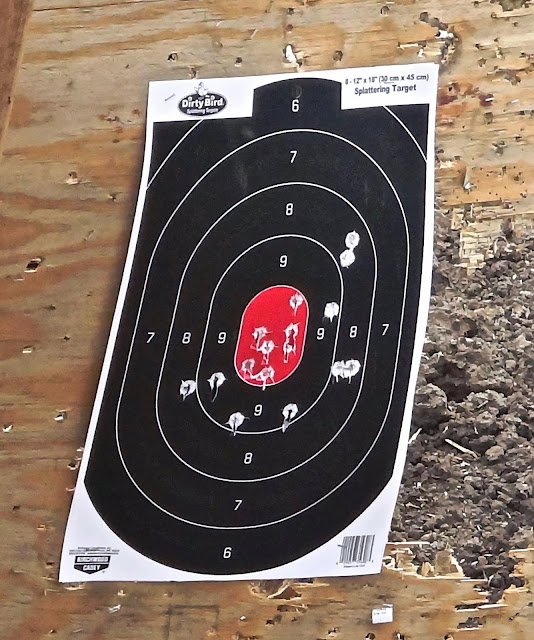 Up Close and Personal

The class got the opportunity to shoot at very close range which is something not allowed at some public ranges even in a properly supervised class. 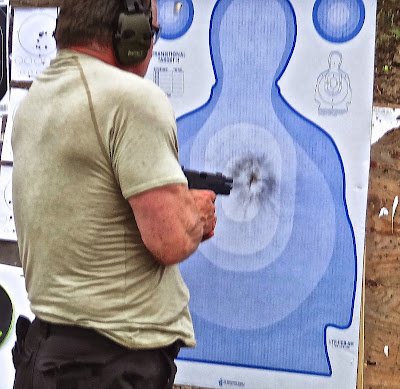 Mike demonstrates the up close shot.

It is a shame that some courses don't allow for this type of training since most attacks occur in very tight quarters. 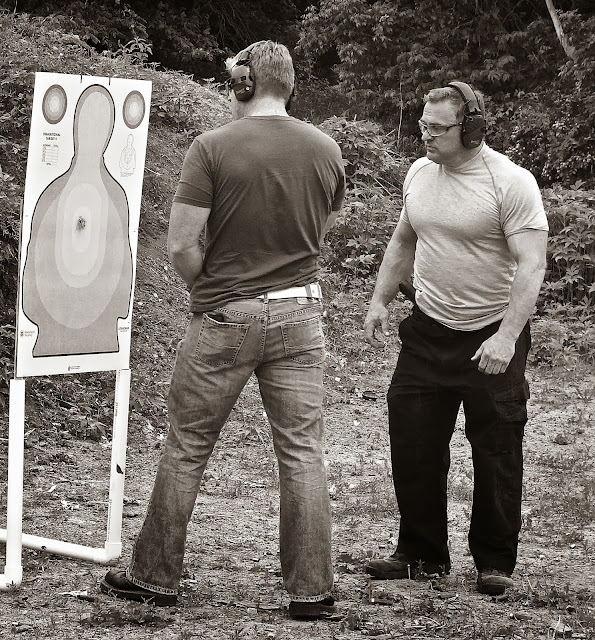 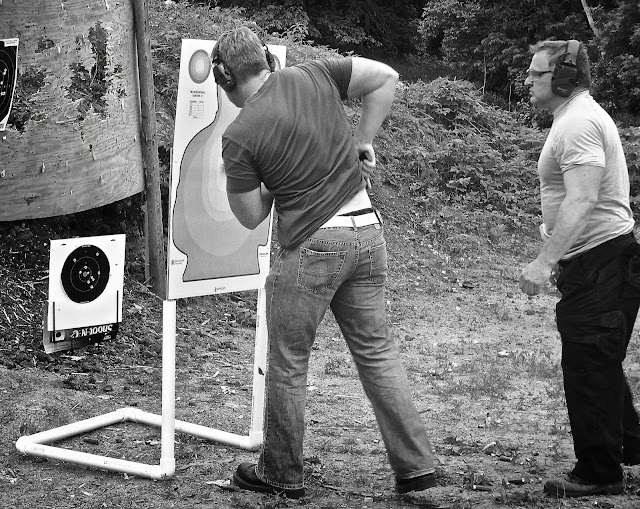 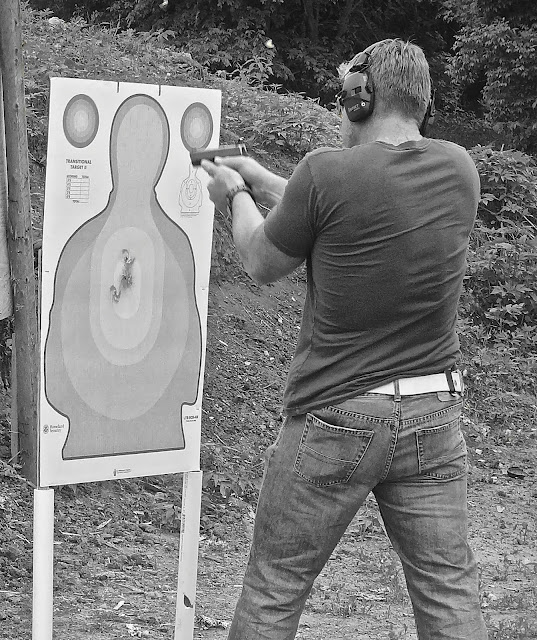 The target shows the results of the slug fired from Matt's Springfield XDs in .45 ACP 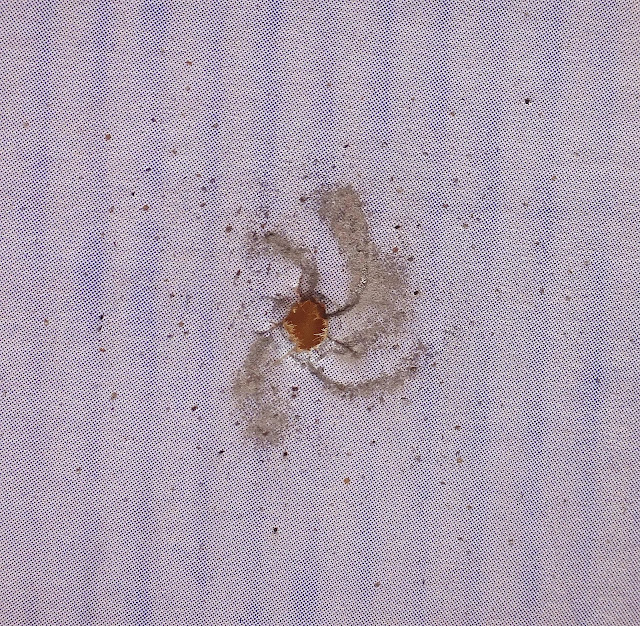 Heidi gets her turn and you will note the improvement in her form after only one hour of coaching. 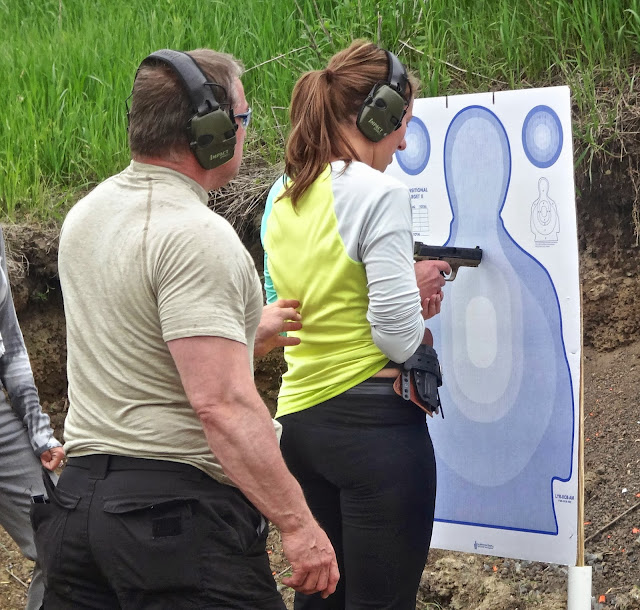 She fires the first round and steps back... 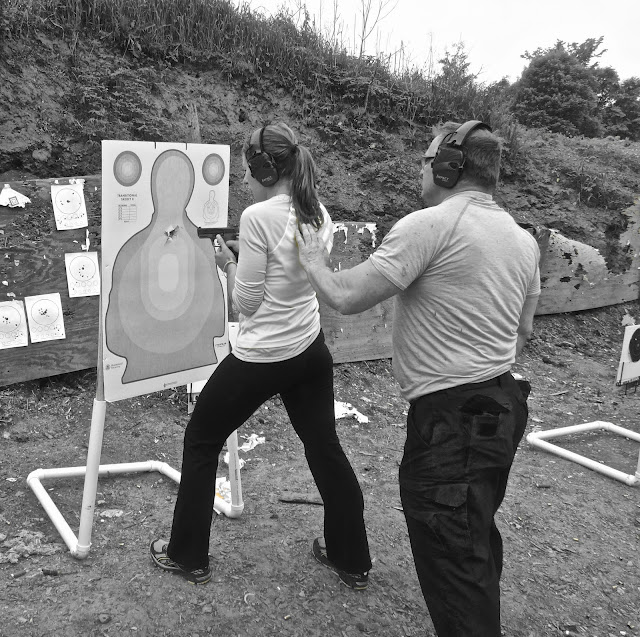 ...and then fires the second 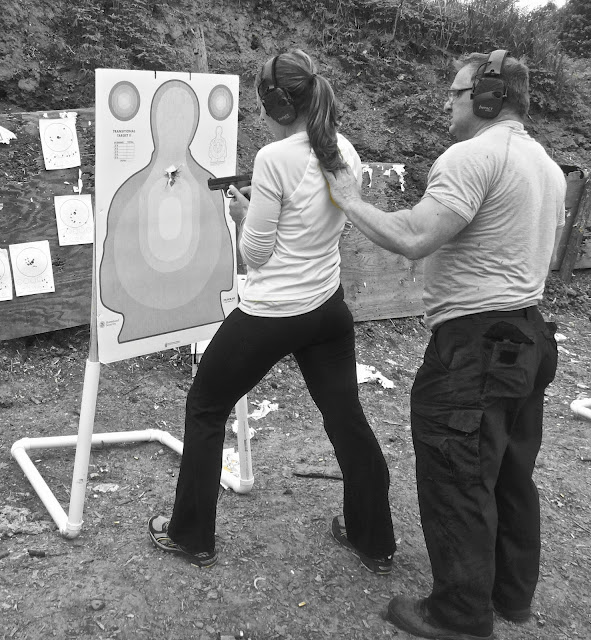 Get A Move On!

Without a doubt the most important factor in defensive hand-gunning is the ability to shoot and move.  If you come under fire and stand still you have greatly increased your chance of getting hit.  While this sounds simple the skill of shooting accurately while moving quickly and smoothly is not easy to acquire.  I have a hard time dialing the phone if someone is standing there talking to me so moving and shooting accurately while someone is shooting at me is not not an easy task to accomplish.  I have seen many students in other classes trip over their own feet.  The efforts to shoot while moving takes practice so that these separate and uncoordinated actions become a natural reaction to a stressful and threatening encounter. 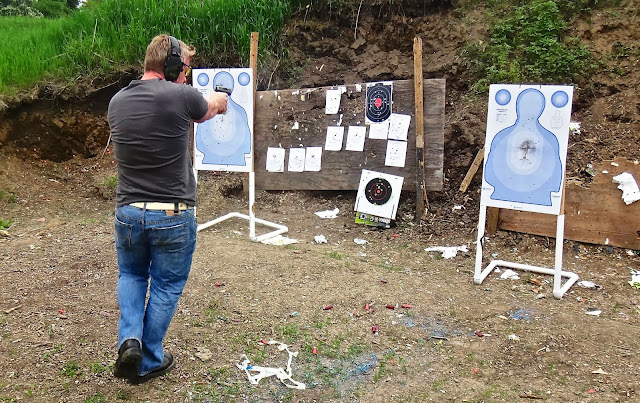 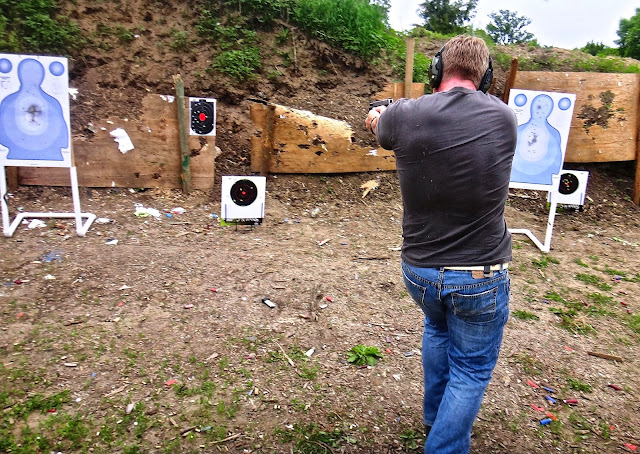 The only way to gain the focus and muscle memory necessary to do this is to drill under stressful conditions.  Again this is not allowed on any public range I know of so acquiring proficiency will require your participation in a class taught by a skilled and experienced instructor. 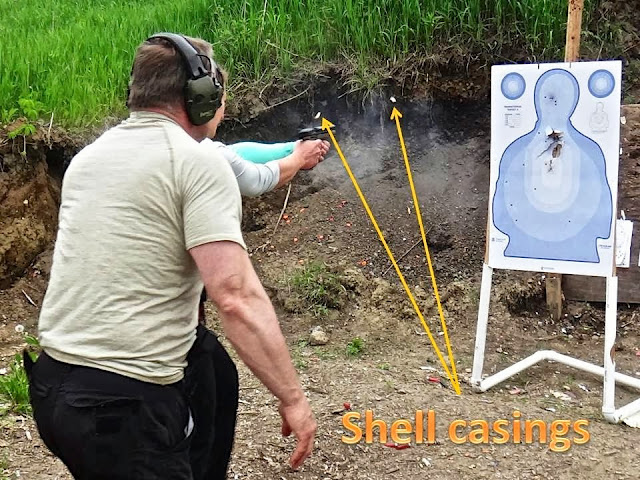 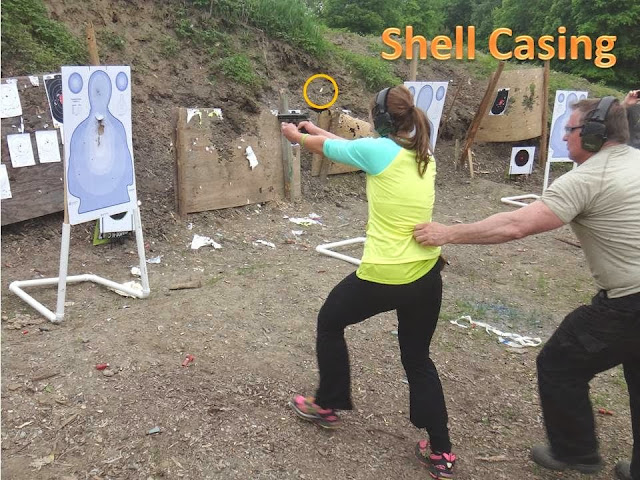 Time to get Grounded 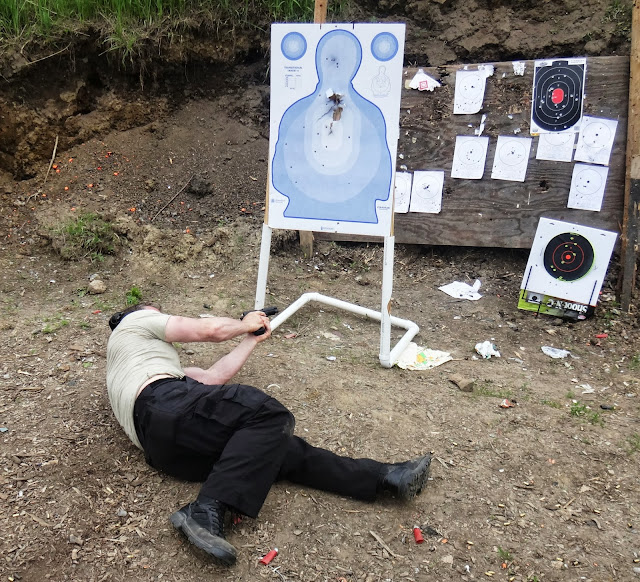 Shooting from the ground is another crucial skill that needs to be honed.  You may get knocked down, you may trip and fall, or you may hit the ground to get out of the line of fire.  Regardless of how you end upon the deck there is a great chance you will wind up on the ground so you need to learn to shoot your way up and out of danger.

Matt shows how it is done 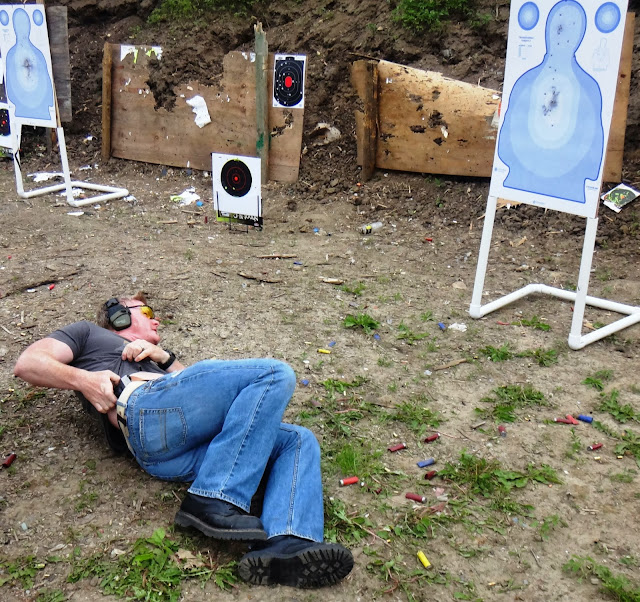 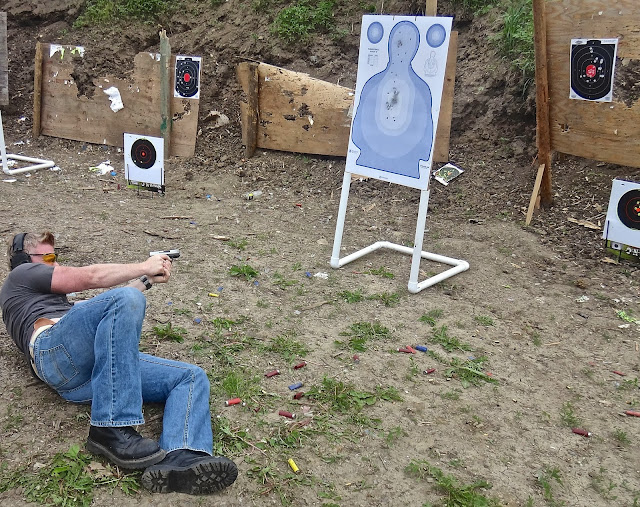 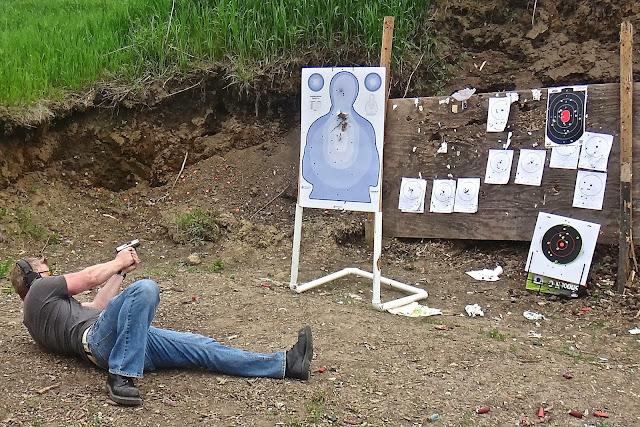 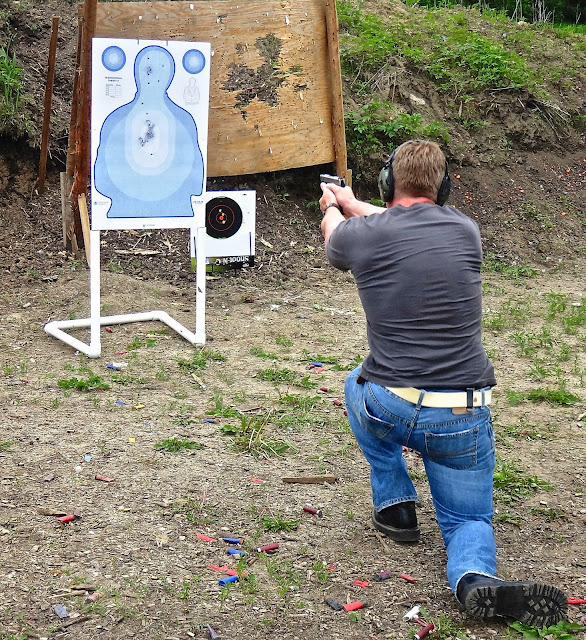 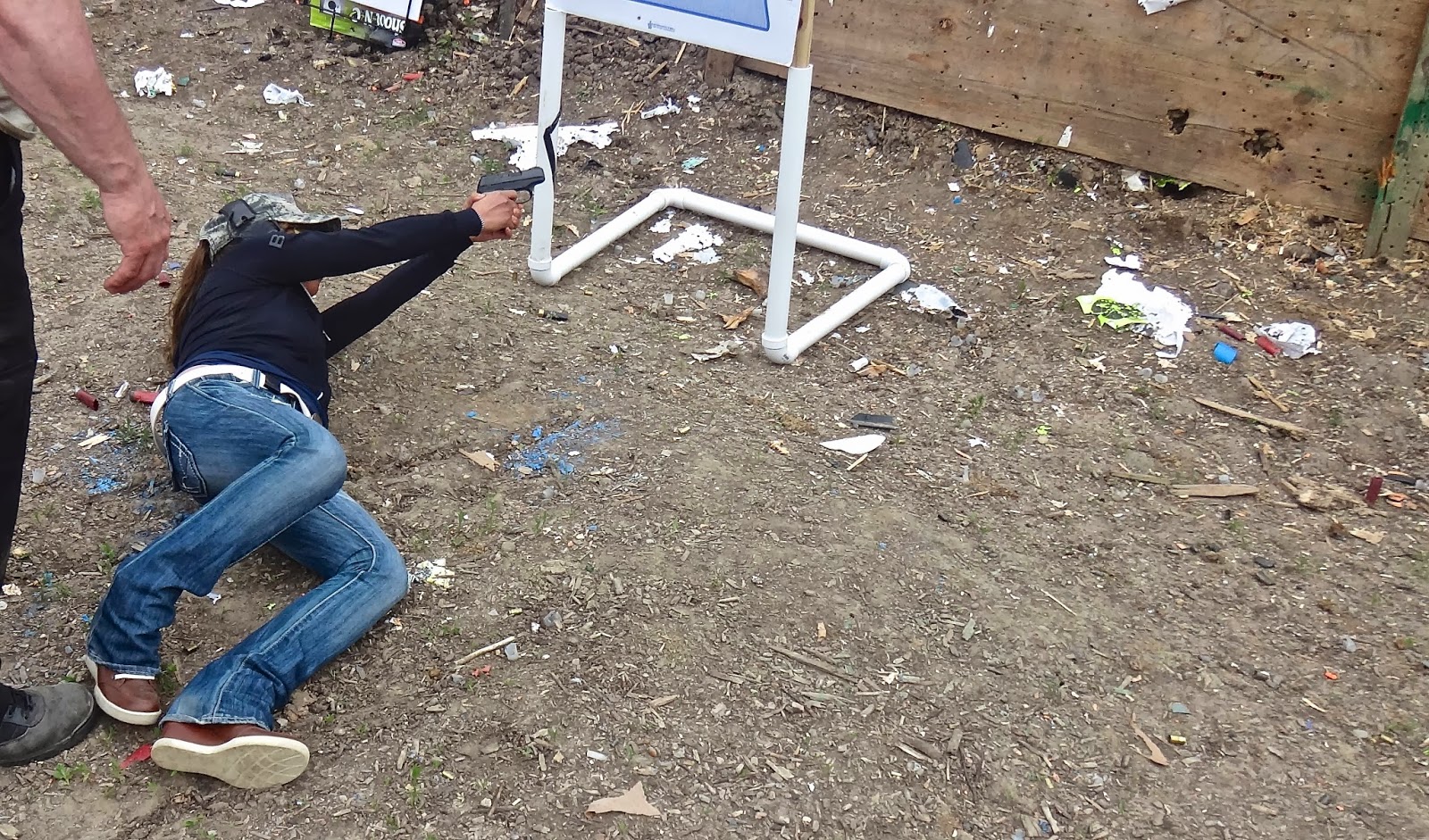 For an introductory, 2 hour class many life-saving techniques were taught and it was great to watch the students evolve during the session.  At the end Mike took the time to explain what they can practice on their own, why they need to continue formal training and what awaits them as they continue to advance.  Continued training is essential since the proficiency gained in class will erode over time.  If you are interested contacting Mike to get on his email class listing you can email him at arnzenmanager@gmail.com.  Anyone who purchases a handgun has a duty to learn to use it safety and effectively.  Failure to do so is irresponsible and negligent.  If you live in the Twin Cities, let Mike Reilly help you be a responsible gun owner.
Posted by Average Joe's Handgun Reviews at 2:31 AM