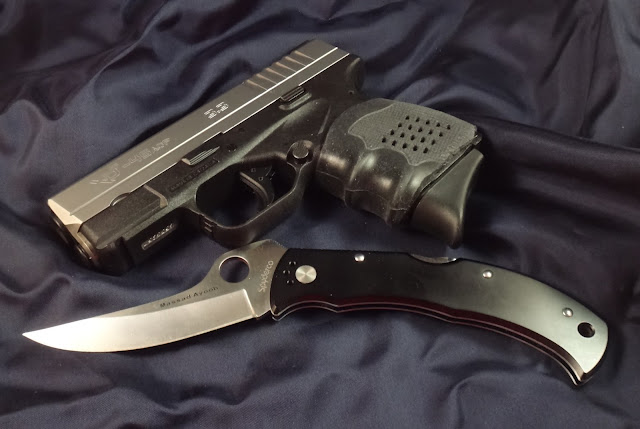 Every now and them someone puts a posting up on a gun related forum about "Everyday Essentials".  Well, here they are.

When Springfield first announced the single stack XDs it created quite a buzz.  The shot show simmered with excitement and the waiting lists grew.  It wasn't until October that I finally got my hands on one in the Rental Case at Bills Gun Shop and Range in Robbinsdale, MN and, at first, I was luke-warm to the pistol:

I referred to it as "not pleasant to shoot".  I said it was "not fun and it was just a little painful".  It shot several inches to the left and did not group all that well.

Even with all that said it had a couple of things going for it:

1. It is of a size that makes it easy to carry and have with you when you need it.  It fits well in most pockets and in those that it doesn't it is easily concealable in a tuckable inside-the-waistband holster.

2. It is a .45 ACP and no one want to be on the business or receiving end of the cartridge that has the historical fight stopping reputation that has served our military since 1911.

I have greatly changed my tune since my October evaluation.  I owe that to a police Sergeant whom I had lunch with in early December.  He had purchased one and had glowing things to say about his XDs.  Well, there are three things I do not argue with police officers about; how fast I was going, what gear works, and where to eat (and his opinion was correct in that regard as well).

Before we go any further let's look at the specs and compare it to its natural competition, the Glock model 36.

As you can see from above, and the width photos below, the XDs is shorter in both height and length as well as width. 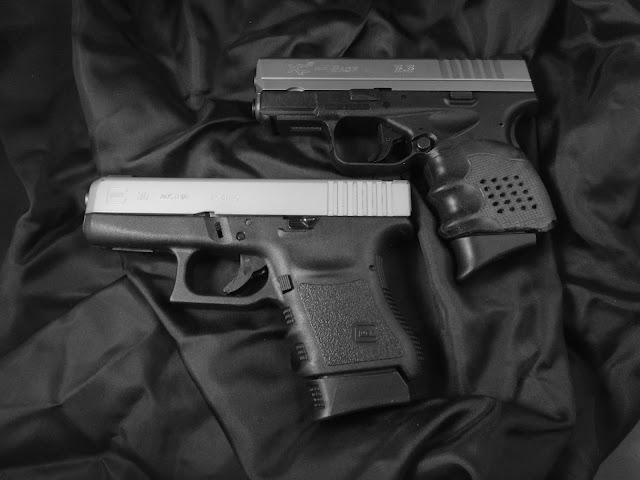 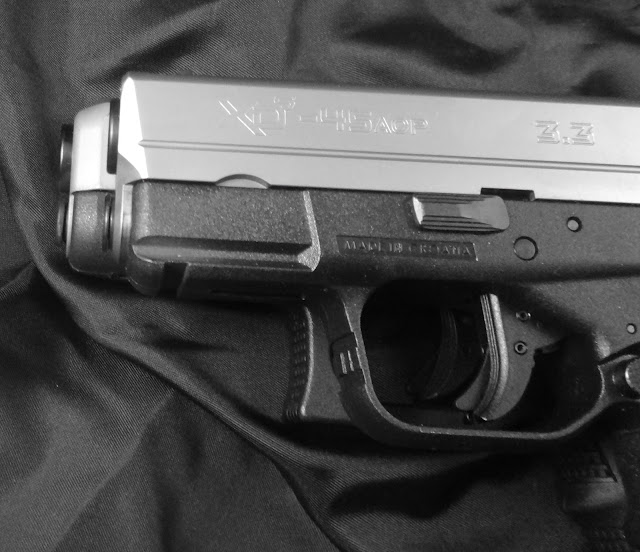 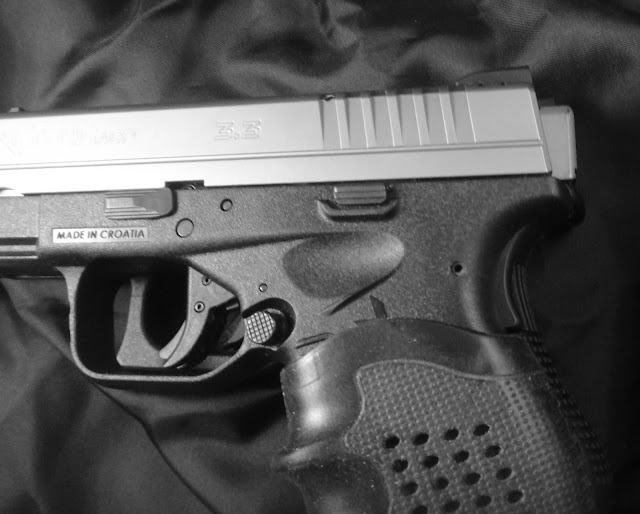 One of the things I mentioned in my October examination was that if I ever got one for myself I would put some sort of a grip sleeve on it to increase the width of the grip and help alleviate some of the pain in shooting it.  Upon purchasing the XDs my sometimes faulty memory was trying to tell me that I had a grip sleeve playing hide and seek on my workbench.  Without too much of a search I was able to find a small Pachmayr Tactical Grip Glove lurking under a lead removal cloth.  Although my luck does not usually run this way it fit perfectly and the rear side of the glove did not interfere with the grip safety on the back strap.  It was a tad too long but a little clumsy surgery with a razor blade and it was now very workable.  Unfortunately I was in a hurry and used an old, dull blade so the surgery was not my best work but it is very functional so I am not inclined to get another one and try again.  In shooting it, the Pachmayr Tactical Grip Glove did exactly what I wanted it to do.  It took the bite out of shooting the pistol and the increased width provided a better trigger reach.  All of this decreased the size of my groups and moved them closer to center.  I would recommend this to anyone buying an XDs.  The next and last enhancement was to purchase a Pearce Finger Extension.  Now my little finger had a place to rest and the groups got smaller and even closer to center.  The Pachmary Tactical Grip Glove retails for $13.98 and the Pearce grip extenders are $9.95 each; so for about $40.00 with shipping you can turn the XDs into a comfortable and formidable self defense pistol.

Standard Features
One of the features that you might overlook is the loaded chamber indicator on the top of the slide just behind the ejection port.  It allows you to visually see if there is a round in the chamber and if you are in low light you can always feel to determine if the indicator is in the up position. 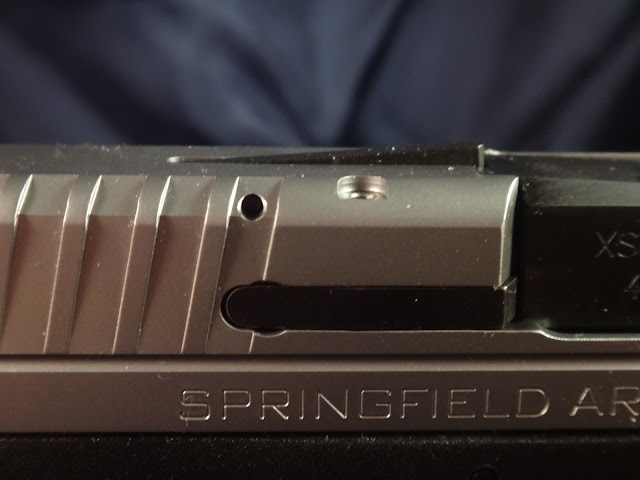 As the back strap curves up the XDS provides a slight beaver tail.   This abbreviated appendage allows you to get a higher grip on the pistol without it being ridiculously long and over-sized as seen on too many 1911 pistols.  The photo below also shows the top of the Pachmayr Grip Glove so you can see how it does not interfere with the grip safety.   I am usually not a 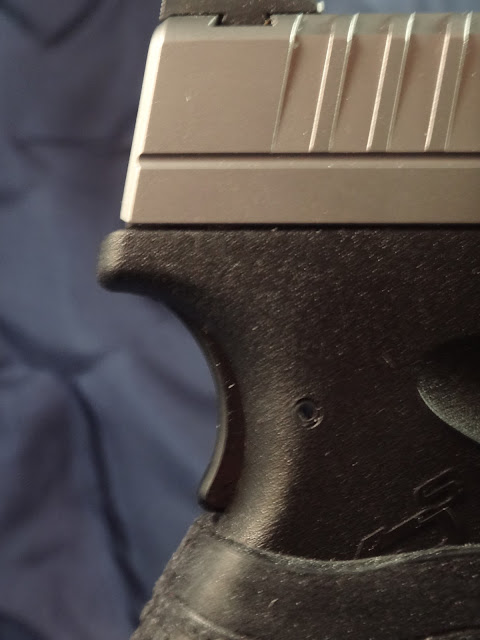 fan of grip safeties but on a pocket pistol I think it makes a lot of sense.  On any pistol carried in the pocket you want to make sure that nothing snags on the trigger and discharges it as you place it into your pocket.  The grip safety would require that the trigger snag at the same time something depresses the grip safety.  It is not fool-proof but is another level of safety. 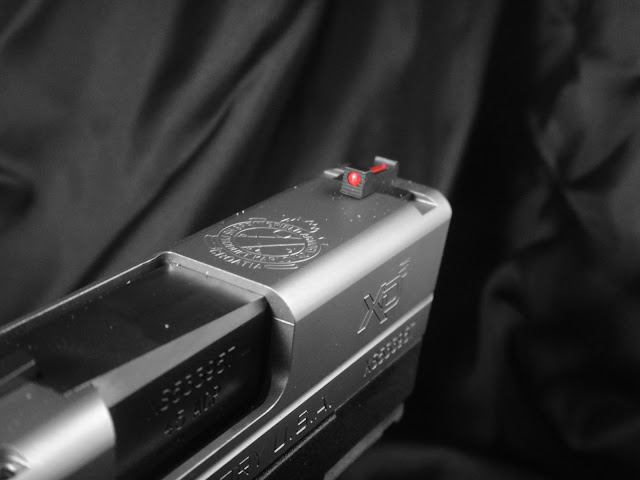 The front sight had a very good red fiber optic insert that enhances the sight picture in all but low light.  (I could not decide which front sight photograph I wanted to use so you get both).  From a cosmetic standpoint I like the clean imprints of the information stamped into the slide, especially the classy Springfield logo on the top just in front of the ejection chamber. 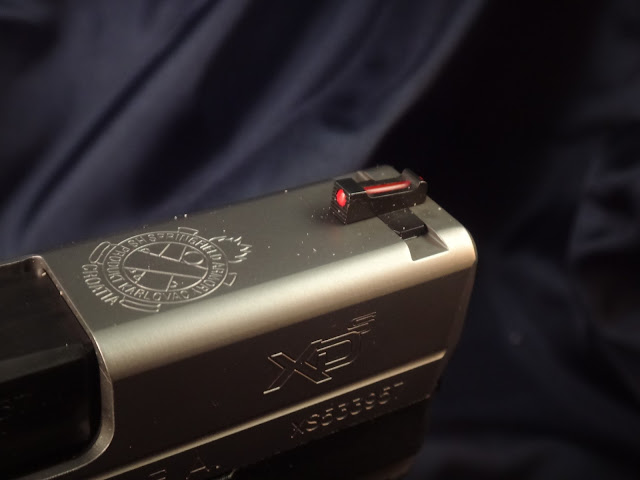 The rear sight is of the  low profile, drift adjustable, two white dot variety.  This photo also shows more of the clean lines and full cuts that make up the slide grasping indentations at the rear of the slide. 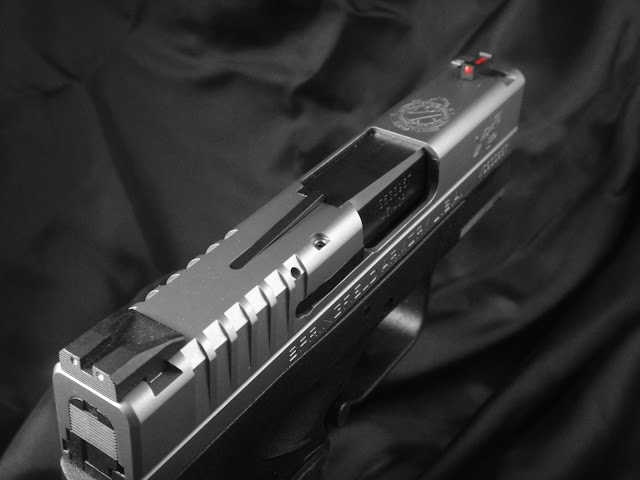 And here is the XDs all snug in it's Remora holster.  I have said it before but part of the genius of the Remora holster is the ability to use it as a pocket holster or inside-the-waistband holster.  It is versatile and it securely holds the pistols upright in the pocket while covering the trigger.  While in its IWB function, it holds the pistol securely in place so that it does not slip when moving around including running, doing shoulder rolls, and handstands. 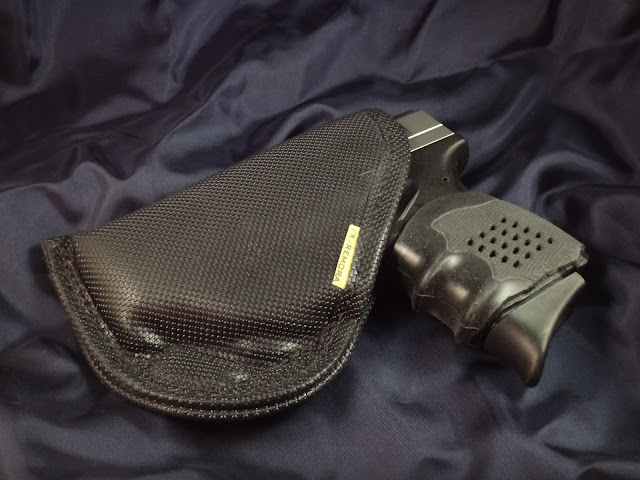 OK, But How Does She Shoot
All targets below are fired at 30 feet.  This first target was fired with the Pachmayr Tactical Grip Glove in place but without the Pearch finger extension.  This target shows the results of 20 rounds of Winchester 230 Grain full metal jacketed ammunition. 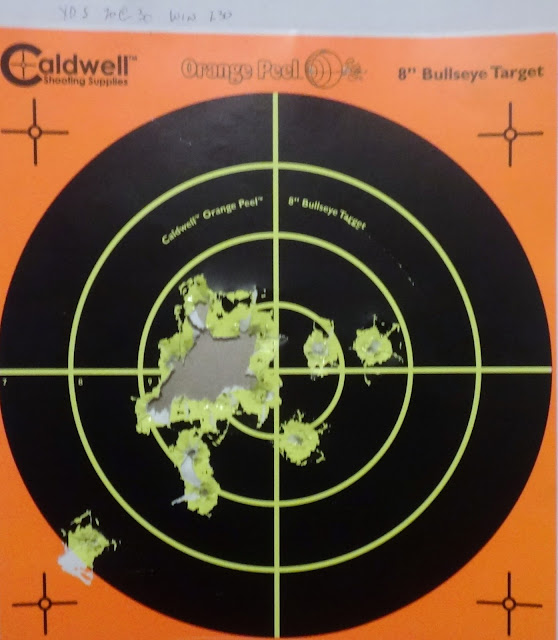 This target shows the results of the pistol at the same range, with the same ammunition and number of rounds but the finger extension has now been added. Note that the group is tighter and not off to the left. 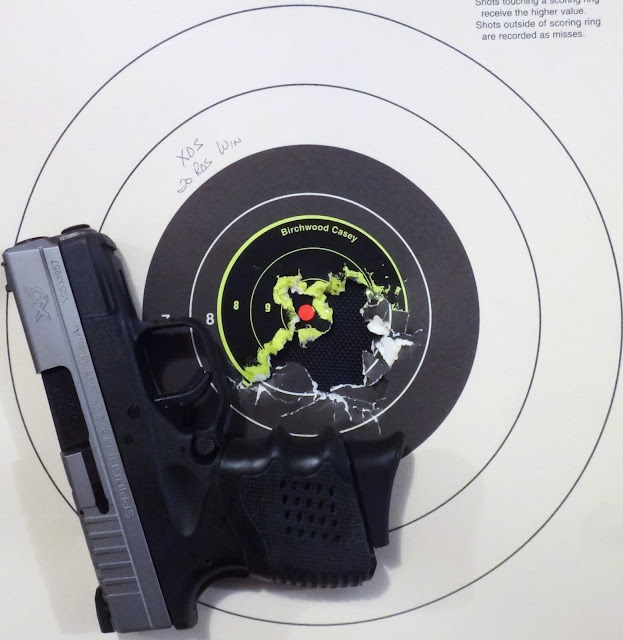 Now we get to the Defensive Ammunition.  Again all rounds were fired at a distance of 30 feet: 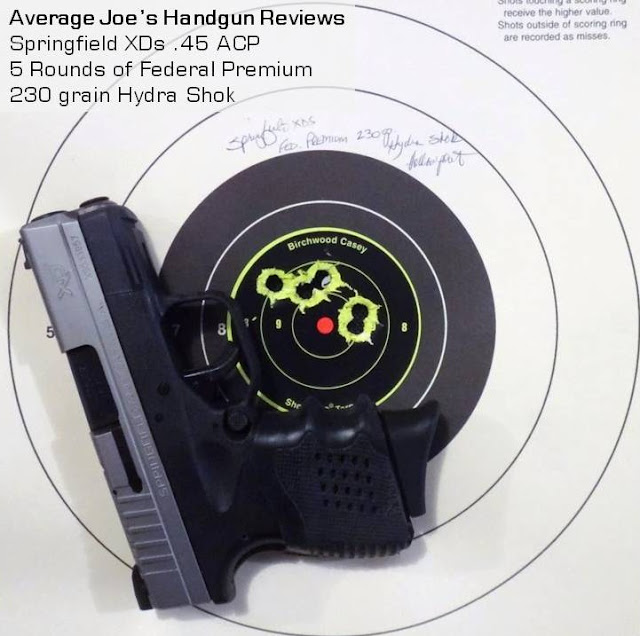 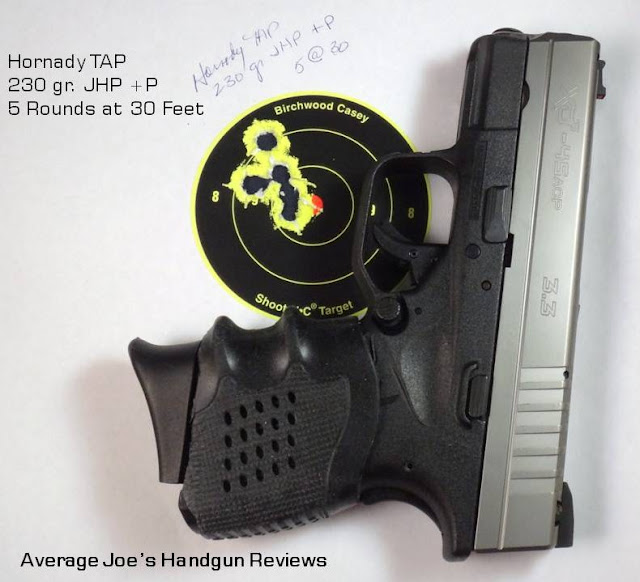 Now, I have heard people deride anyone who desired one of these pistols chiding them that the low capacity  puts it on par with a "J" framed sized revolver.  However, there are differences and I am happy to point them out:

1.  It's a .45 not a .38 Special.  I wouldn't want to be shot with either but the .45 is bigger, heavier, and more likely to stop the assault faster.
2. It gives you a total capacity of 6 rounds over the five shot capacity of the J frame revolver.  It's only one round more but it there if you need it.
3. It is easier to reload.  A spare five round magazine takes up little space in your pocket and magazines can    be dumped and replaced a lot quicker than you can eject your five rounds from the snub nosed revolver's cylinder and replace them from loose ammo, a speed strip, or a speed loader.  I know that Jerry Miculek is lightening fast in in reloading his revolver with a speed loader but two things: A. He is using a large "N" framed revolver not a small "J" framed handgun and B. You are not Jerry Miculek.
4.  The XDs has better sights.
5.  The XDs has a better trigger.
6.  The XDs has a better grip frame/angle
7.  The XDs is easier to shoot and more accurate than your little J framed revolver.

I just cannot really ask a pistol to do more than the XDs is doing for me.  The Hornady TAP +P ammo is hot stuff and when I squeezed off the first round I questioned whether it would even hit the paper.  I was astonished that it was the topmost round in the 11 O'Clock position.  I was further astonished as each additional round hit right next to the last one.

And for those who want to know about the knife pictured with the XDs, it is the Massad Ayoob designed folder for Spyderco.  It is perfectly designed for maximum slashing and stabbing potential.  It is now discontinued but in just checking, there are seven listed on eBay. Good Luck 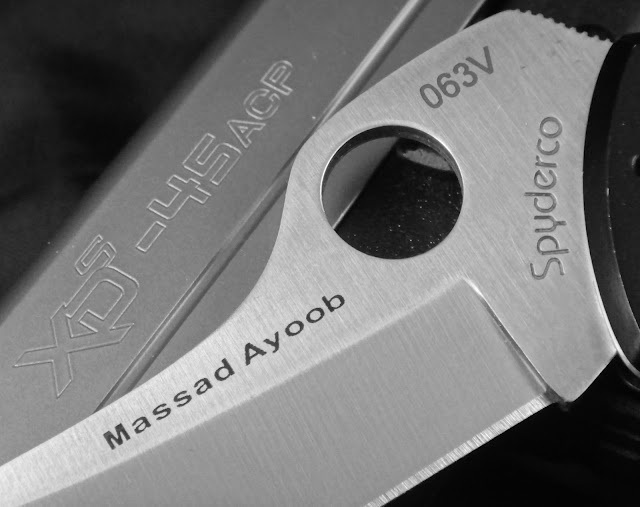 Hey Joe. Great Review, however you forgot to give any information on the trigger press. How did it feel? Short crisp reset or spongy? I like to hear about that part as well. Thanks.

The trigger pulls comes in a 7.1 pounds. There is a little light take-up, then the trigger stops until you have applied the 7.1 pounds and it then breaks very cleanly with almost no over travel. The reset is short and very clear.

Thank you for the wonderful and informative gun reviews and website. What are your thoughts about the difference between the bitone slide or the all black slide for concealed carry? I noticed that you have the bitone. Would you recommend that option as a better choice than the all black? Thank you for your helpful and respected perspective.

The difference between the black and stainless steel slide is merely cosmetic. There is high demand for this little pistol and the buyer will likely end up with which ever one the dealer has in stock.

Thanks for the kind words. Sometimes I get lucky with my little point and shoot camera and this was one of those times. In terms of the knife--hey, I am not too proud to suck up. Seriously, like most of what Mas produces it was a well thought out and executed knife. Similarly, Mas's writings have had a profound impact on me; concise writing backed up by critical thinking and logical conclusions are traits that are in short supply.

I notice the grips are not available for the xds yet. What kind of grips did you use? Is it it from a odor or a xd?

Hi JOE--GREAT REVIEW. I recently traded away my Glock 26/27 and a M&P Shield in 9mm and bought the SA-XDs. Like you I really like the idea of carrying a .45acp, because if I was only left with hardball I would still be in good shape for SD. The main reason I bought the XDs is that I actually shoot this pistol better than the Glocks (and I've carried my Glocks as my main "BUGs" for the last eight years). I always thought that the SA-XD pistols was a 3rd world attempt at being a Glock--I was wrong. I'm looking forward try a XDM in .45acp. Thank you Joe.

Since this review, have you shot the 9mm version. I dont want the extra bulk with adding the grip and with todays 9mm rounds, they are pretty lethal with an easier follow up or two. If so, how does it shoot and is the recoil even worth considering

I have not even seen the 9mm version anywhere yet so I can't offer an opinion.

I have had my 45 xds for about two years now ang got 5938 rounds through it with no problems.Love this little gun ,also it carries very good.Sam