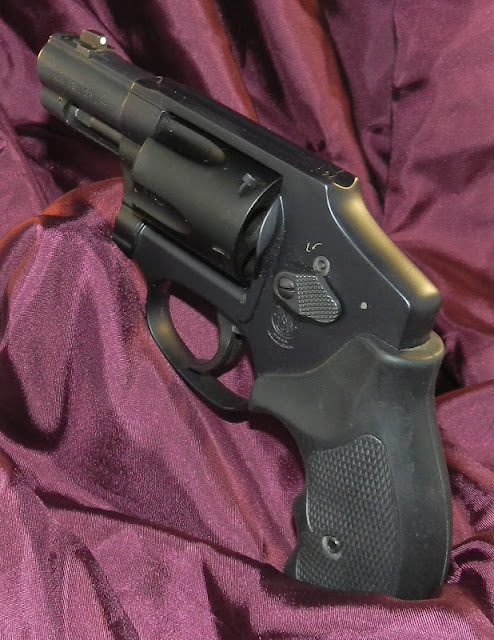 What we are looking at is a standard Smith & Wesson "J" frame sized revolver in .38 Special which is rated for +P ammunition.  It has the concealed hammer as seen in their vintage "Centennial" model and the 1.78 inch barrel has been elongated almost half an inch beyond the front sight to accommodate a generously sized port cut in the top of the barrel.  It was a worthy idea that just doesn't pay dividends.  I am not sure of the dates of production but it was not long, in fact, this used specimen was the only example I had ever seen.

The Powerport set up had the possibility to help with two problems I usually have with most small J-framed size revolvers which are:

1. A minuscule ramped front sight that is difficult to see which could be solved by the large white dot on the 642 PP's front sight.

2. Fairly brutal recoil when used with +P defensive loads which should be mitigated to some degree with the port.

I can report that the 642's front sight was a great improvement over the standard sights Smith & Wesson puts on their little revolvers.  However I could not discern any difference in recoil or subsequent accuracy improvement provided by port.  In fact the port actually presents two potential disadvantages.

1. If firing in self defense at night the muzzle flash erupting through the top of the port could cause temporarily blindness.  This would probably last less than a minute but a lot could happen during those 10 to 20 seconds when you cannot see.

2. If you were engaged in a close quarters attack where you were fending off the assailant with your left arm while you drew and fired from the hip after clearing the holster, the blast of flame and hot gasses coming up from the port could severely burn your face causing you to drop the weapon and let your guard down. 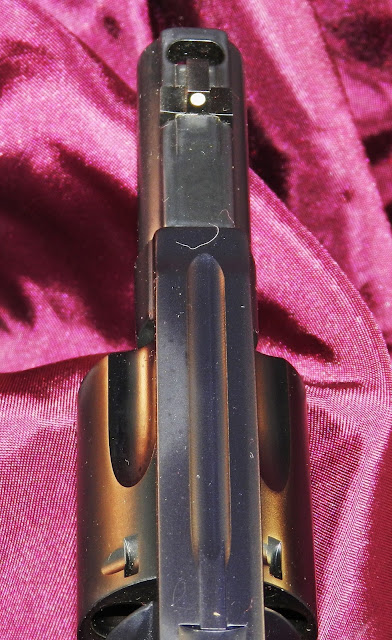 So...on the positive side you have good sights.  On the negative side you have the inherent potential disadvantages presented by the port, a terrible trigger pull, a capacity of only five rounds, severe recoil, and grips that are nicely designed but still too small for the amount of recoil generated.

The Targets Tell The Tale:

At 21 feet the 642 gave what some would call acceptable combat accuracy and while that maybe true I want a handgun that provides me with better than combat accuracy.

The 642 was fired with three defensive rounds that I had on hand.  Two were +P rated and one was not. 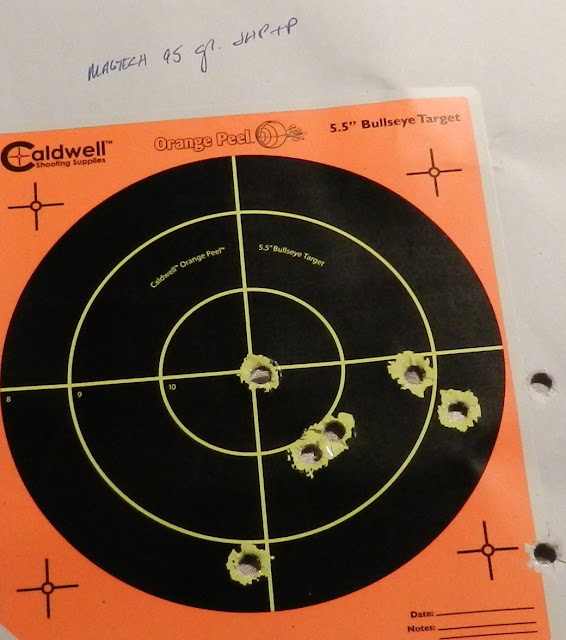 At 21 feet 10 rounds of Mag Tech's all copper 95 grain +P jacketed hollowpoint ammunition is fired with two of the hot rounds missing the 8.5 by 11 inch paper completely. 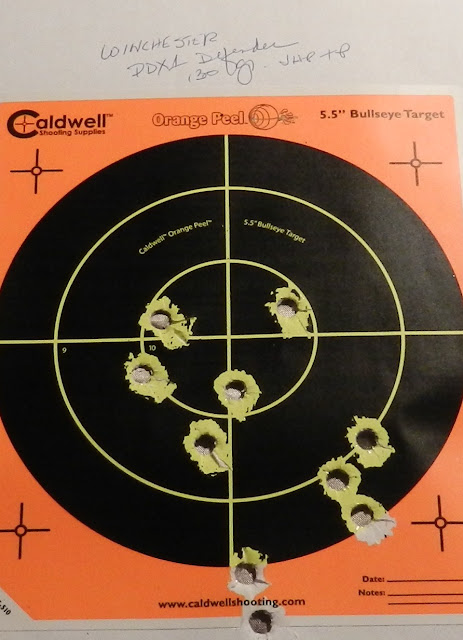 The Winchester PDX 130 grain JHP +P load faired much better with all 10 rounds making their way on the paper. 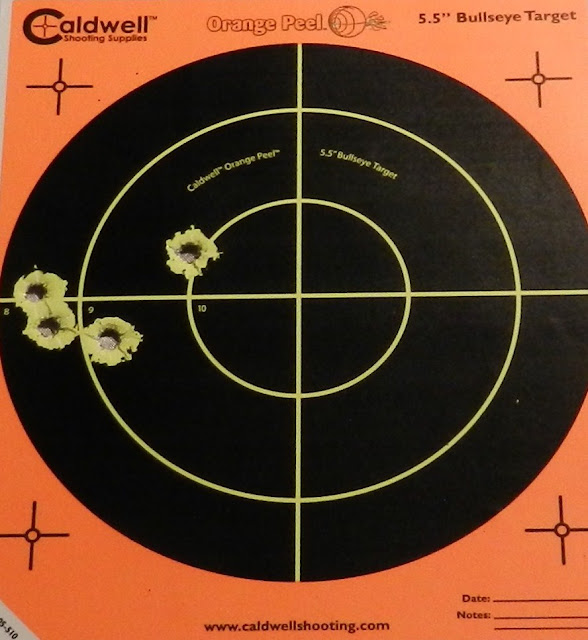 Unfortunately the Winchester Personal Defense standard pressure JHP did not fare well.  My final five rounds from the box scored me only four hits.

Anyone who is a regular reader of this site or listener to the Gun Nation Podcast (www.gunnation.us) knows that I am not a revolver fan.  The larger calibers may work well for hunting but I find the revolver to be inefficient for self defense.  The number of rounds are limited to 5 or 6 (and yes, I know that S&W and Taurus make some revolvers that hold 7 and 8 rounds but between the two manufacturers only three models hold more than 6 rounds).  They are also slower to reload, have either ridiculously  heavy or laboriously long trigger pulls (sometimes both), and generate more recoil than a semi-automatic in an equivalent caliber.  Nonetheless there have been some that I liked and I want to take this opportunity to reminisce and talk about two that I wish I still had. 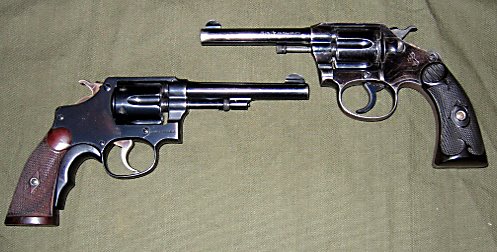 My specimen was acquired in Boise, Idaho when I lived there.  Boise gun shops were loaded with the largest array of vintage firearms I have ever seen.  This revolver had obviously seen better days as about 50% of bluing was gone.  They cylinder locked up tight and the bore was in like-new condition.  I found out that TR was right.  The .32 Caliber Police Positive was capable of minute-of-nasal cavity accuracy.  Here are six rounds at 21 feet: 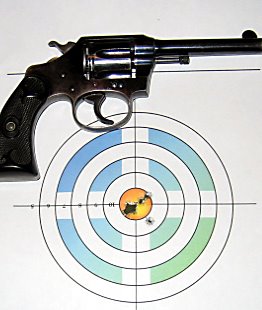 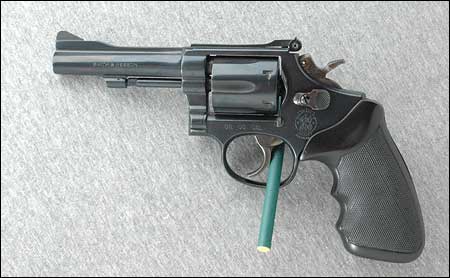 Before Smith and Wesson began giving their handguns model number designations this pistol was simply called the .38 Special Combat Masterpiece...and they were right!  This model 15 was produced in the 1980's with a plain ribbed barrel and adjustable black sights, front and back.  She also sports rubber grips which have finger grooves and slight palm swells as were all the rage back in the 1980's.  Interestingly the revolver's frame is stamped "Or. Co. Cal" presumably for Orange County California and was probably purchased for the Sheriff or Corrections department. 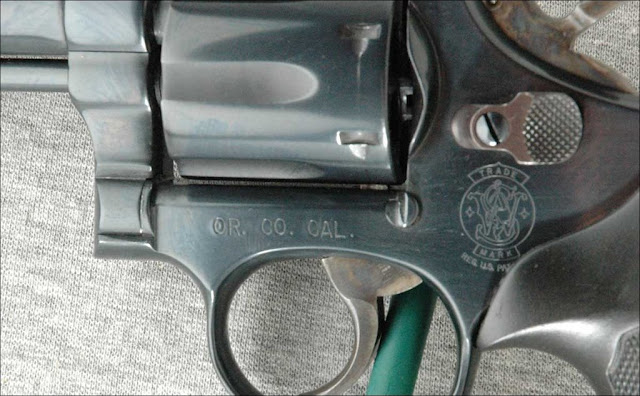 This one was must have been purchased and never issued before the change over to Beretta 9mms because there is little wear and usually police duty handguns get pretty dinged up as they bump into desks, door frames, doors, car frames, etc.  This one showed none of that kind of usage.

The most amazing feature of this revolver was its trigger action.  Far and away the best trigger pull on a revolver I have ever experienced.  It was so good that there was never any temptation to cock the hammer and fire it single action.  I don't know if they just made them better back then or if a police armorer worked it over.  If it was the later the man knew what he was doing.

This revolver was also aces in the accuracy department as seen below:

Here are two targets with six round fired at 21 feet: 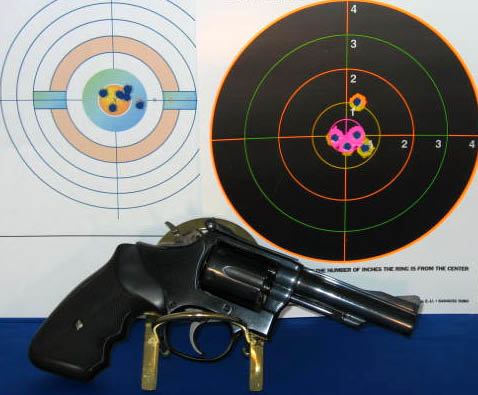 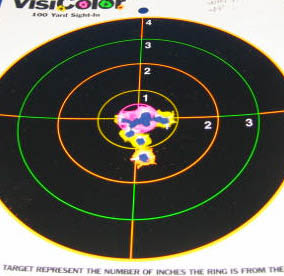 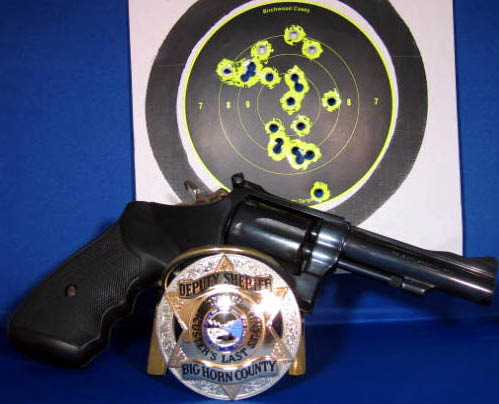 And lastly, here are two targets fired at 35 feet: 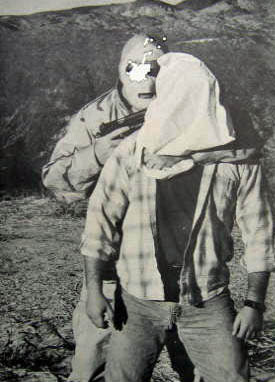 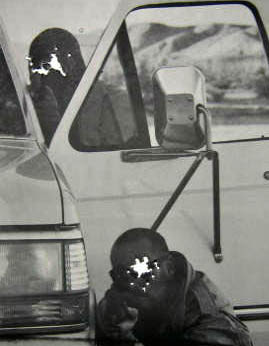 While I am not a revolver man I would not feel under-gunned if I had this revolver back in the Average Joe Battery. 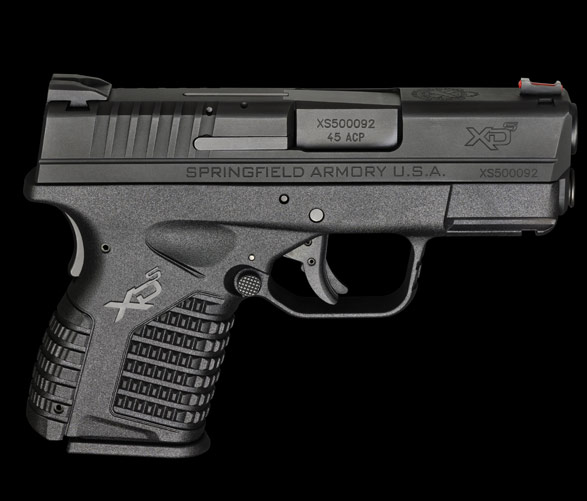 I finally got to shoot the Springfield XDS at Bill's Gun Shop and Range in Robbinsdale tonight.  Below are target photos.  Like a lot of pistols I tend to shoot a little to the left so if I purchased this pistol I would want to move the rear sight over and it is drift adjustable for horizontal adjustment.  The first target was shot with 18 rounds of Federal Target and Range 230 grain FMJ at 21 feet.  The next target is 10 rounds of the Federal ammo and 10 rounds of Mag Tech 230 grain FMJ fired at 30 feet.  The final target was 40 rounds of the Mag Tech ammo fired at 50 feet.
For off duty concealed carry or as an on-duty back-up pistol the XDS would serve you well.  However, if you are looking for a gun to shot frequently this is not the handgun you are looking for.  It is comfortable, but not pleasant to shoot.  While that may seem contradictory it really sums up the experience with the XDS quite well.  I had no trouble shooting it well but it was not fun and it was just a little painful.  After about 30 rounds my right hand was tingling which is a warning sign of pending nerve damage.  It is a pistol that you will end up firing about 25 to 50 rounds through it at each range visit.  I fired 78 rounds through it because there was a particular number of rounds I wanted put into the targets at each of the three distances at which I was shooting.  If, God forbid, you wind up using it in a shooting scenario there will be no denying that you fired it because the sharp edged pattern molded into the grip will be firmly imprinted in your shooting hand which will also be very red.  Were I to get one I would probably supplement the grip with a rubber grip sleeve to mitigate some of the pounding that my hand was taking.

In terms of comparing it to my Glock model 36; I have been known to put 150 rounds through the Glock at a single range visit without the tingling sensation in my hand.  For the record, the right hand is still slightly tingling and I ceased firing the XDS 3 and a half hours ago.

On the positive side, I did not really notice the abbreviated grip when I was shooting so this was a non-issue.  Also,the fiber optic red sight was very easy to see once I figured out which part of my octo-focal lenses to look through.

Here are a few targets taken with my crummy cell phone camera: 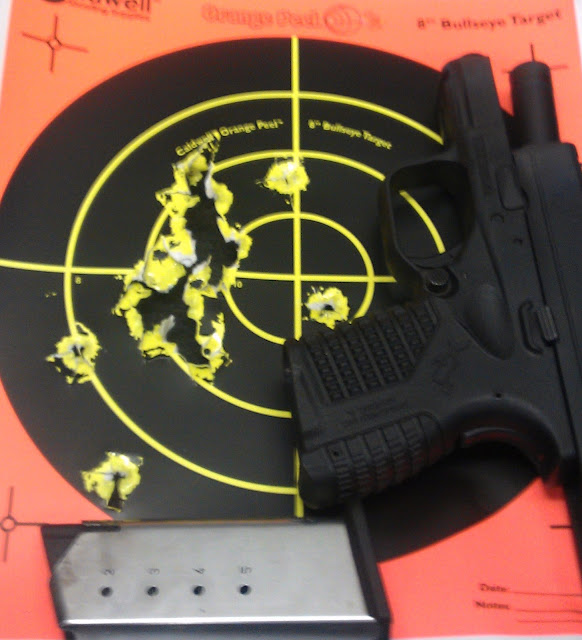 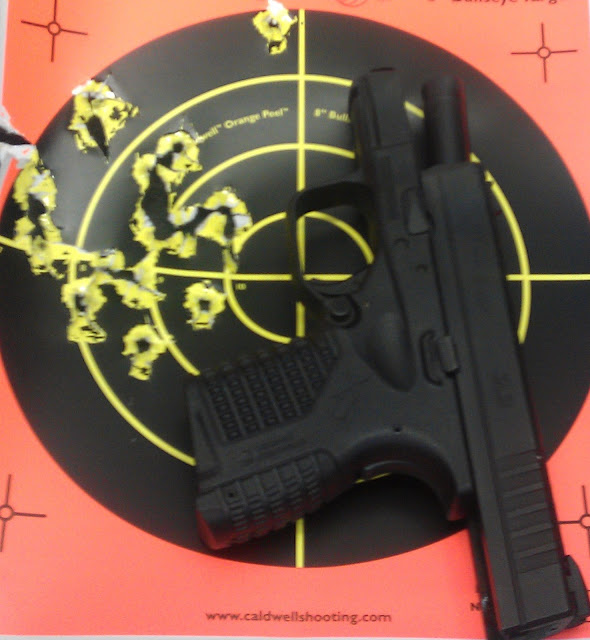 Lastly, 40 rounds of the Mag Tech ammo was fired at a range of 50 feet: 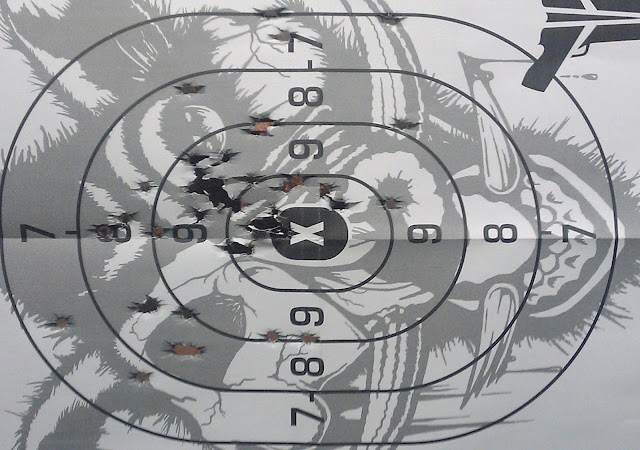 I'm a big fan of the Combat Masterpiece, as was my dad. He used the fixed sight version when in the military in the 1950's and after the adjustable sights version came out, he carried a Combat Masterpiece for decades thereafter.

Agree on the Glock 36. I have no issues shooting mine for extended range sessions of 4 or 5 boxes of 50 each. Don't know why I don't carry it more...

The S&W Model 15 Combat Masterpiece was available way before the 1980's. I carried one in 1971 while with the New Orleans Police Dept. Great gun excellent double action trigger.

You are correct, the production of the Combat Masterpiece/Model 15 ran 50 years from 1949 to 1999. I was just inferring that the one I had was made in the 1980's. I tend to think that S&W has re-introduced as a part of their Classic line-up but I have not seen one.