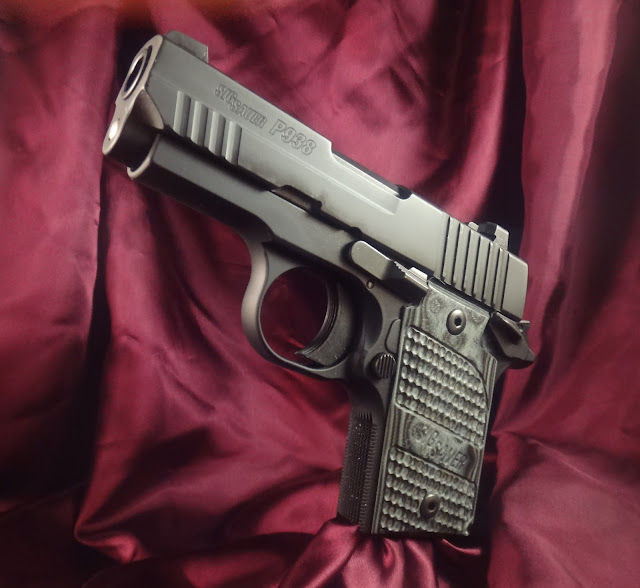 OK, I saved the best for the last installment in our series of 9mm pocket pistols.  The SIG P938 is "Best in Class"!  Now, let me be clear; I am NOT saying that it is the best defensive pistol on the market.  But in terms of a go anywhere, always with you, actually fit in your pocket, and greater than a .380 it is the best I have handled and I have handled most of them.  There are pistols that are smaller but there is a point of diminishing returns on how small you can make a handgun.  That point is crossed when:

On the "I wish they would make list" of pistols I have been asking for a Colt Pocket Hammerless Model M in 9mm.  This little SIG is probably about as close as I am going to get AND it is proof positive that it would be possible to make one. 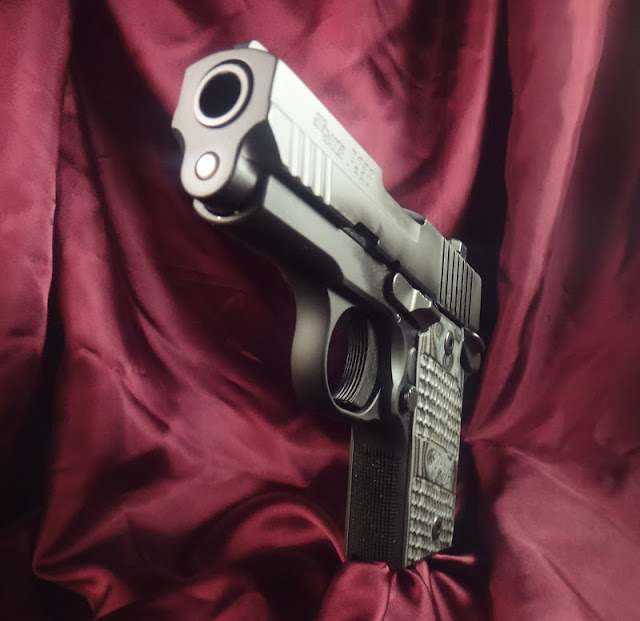 So, let's talk about how the 938 stacks up against the other four we examined (the Colt New Agent, Smith & Wesson Shield, and Bersa BP9 CC):

Let's talk about the other goodies that are on this pistol: 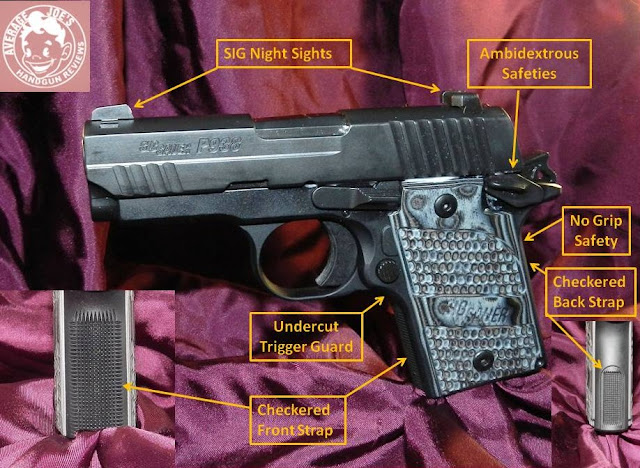 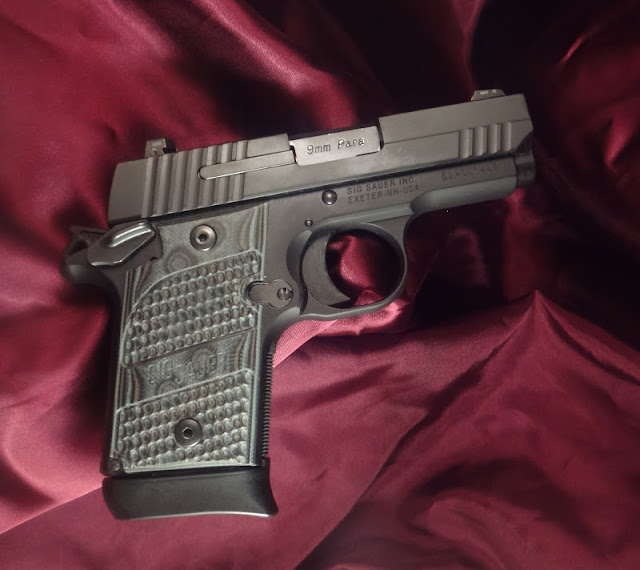 The P938 breaks down into its six major components and is easier to disassemble than most 1911s.  There is no barrel bushing to worry about and the guide rod is very easy to put back in place when reassembling the pistol. 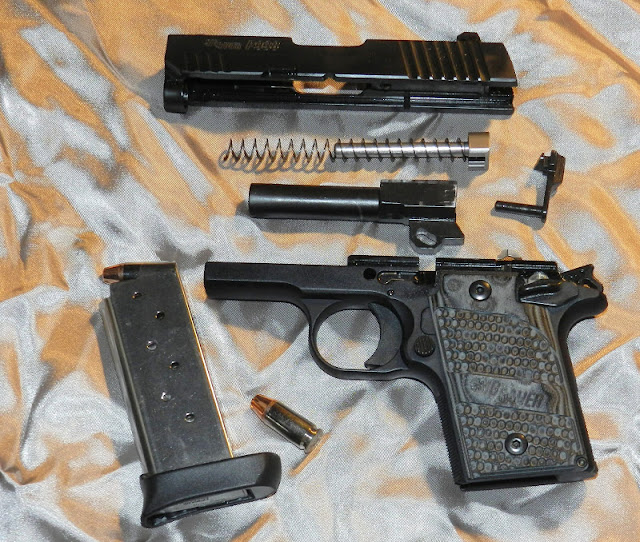 In terms of accuracy this is not a target pistol nor is it a long range firearm.  Between 0 to 45 feet you will have all the accuracy you will need for most self protection contingencies. 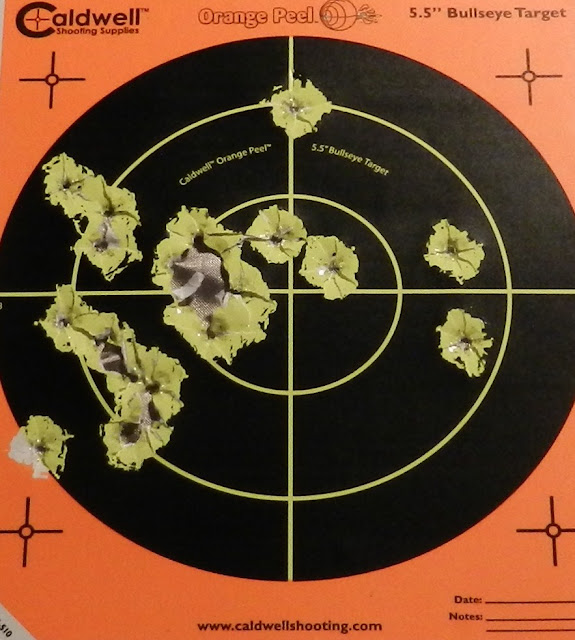 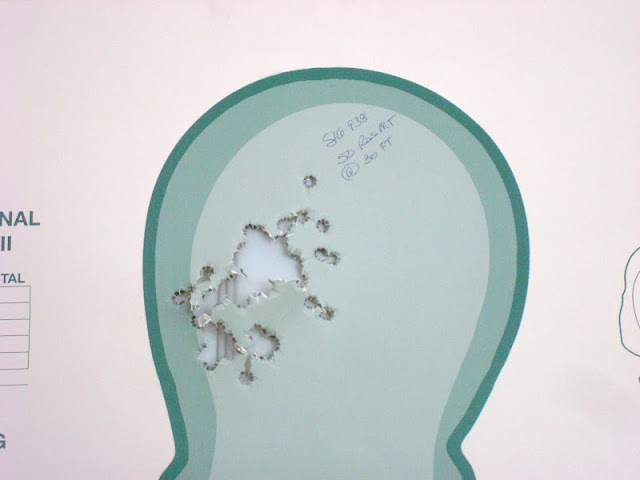 And you can see the group open up at 50 feet 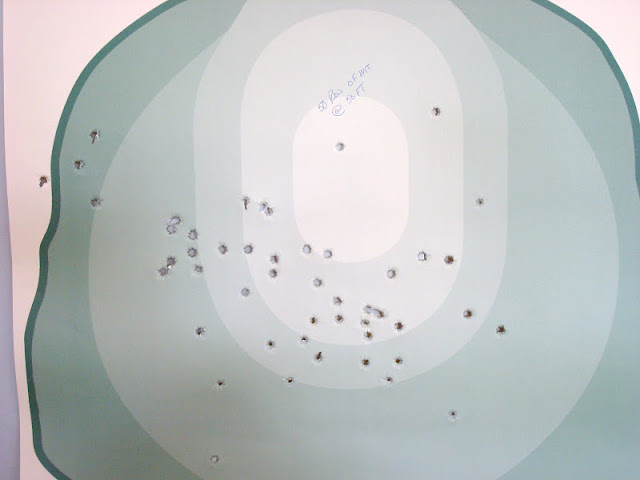 The trigger reset on the P938 is amazingly quick.  I could empty 7 rounds in just over two seconds and at 21 feet it would be effective as shown by the 50 rounds fired below 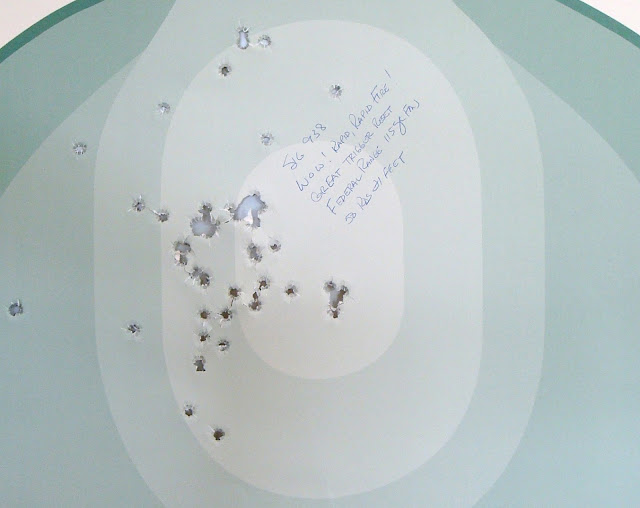 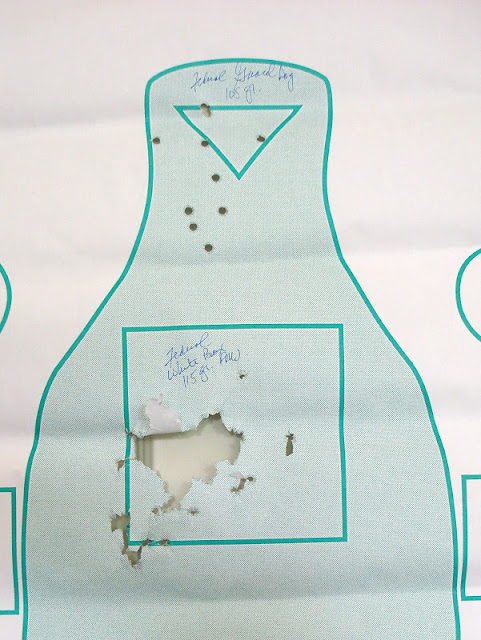 The recoil of +P ammo is stout but not difficult at all to manage. 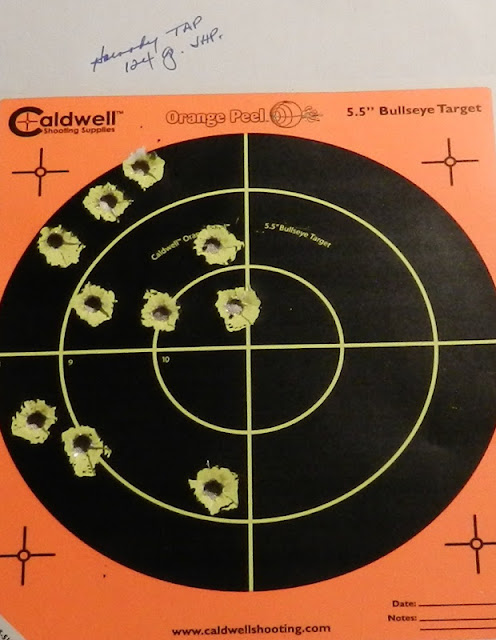 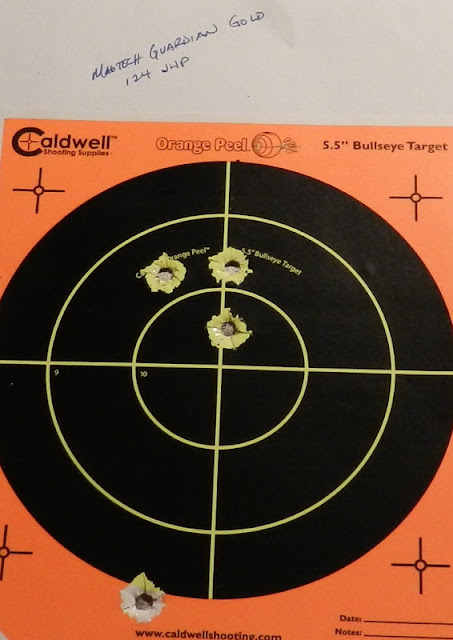 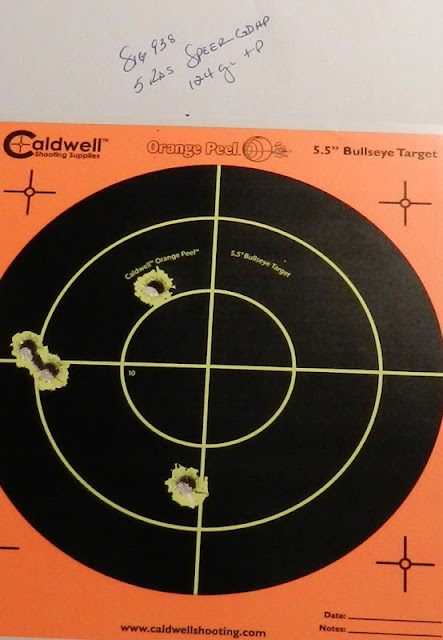 If you need a concealed carry pistol the SIG P938 is one you can take with you just about anywhere you go.  The micro .380s were a passing fad as the manufacturers can now provide you with the power of a 9mm in a .380 platform and, as I said earlier, the P938 from SIG is best in class.

Lastly...to the good people at SIG: could you make me one with a half inch longer barrel and in the grip?  Please, please...just for me?  I really want my 9mm Colt Model M Pocket Hammerless clone. 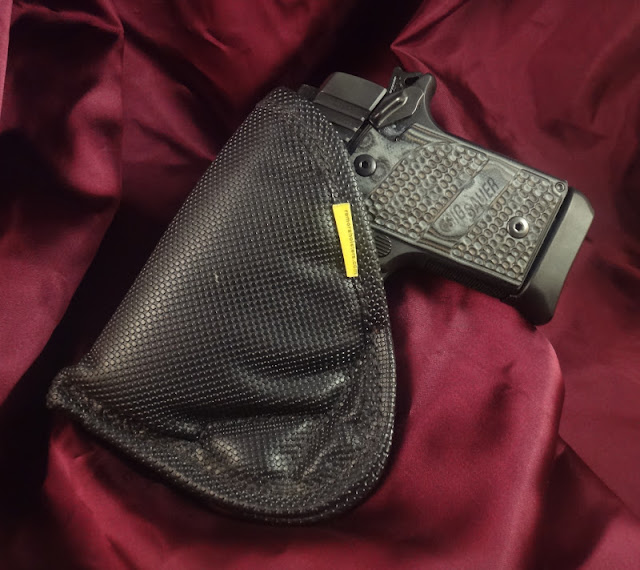 The SIG 938 is all snug in its Remora Holster and ready for a night on the town either in the front pocket or inside the waistband.

Great review, I just ordered a P938 for a ccw. I loved it the moment I picked it up.

Great review. I have one and love it. Have it in a Bullard belt slide with sweat guard holster (76.00) and it's an excellent holster. Form fitted like no holster I have ever seen before, and I'm a holster maven.

I have the same model and agree with you, especially about Colt needing to make that gun! I love the 1903 but a 9mm is far more everything than the .32 acp.

I hate the grips and don't care for micarta. I find it slippery when it is smooth, as on an excellent knife I have. As soon as I can, I want to get some soft rubber grip panels like a Hogue or a Pachmayr type of grip. Don't care at all for the feel of the Extreme's micarta texture and find it mildly abrasive.

It took me awhile to get used to the Gen 3 Glock grip texture, but I'm not sure that I will ever come to love the rough textured grip on this model.

Other than the grip, it's a great carry gun for me and it shoots well.

I agree completely with you on the 1908 in 9mm it would be a great carry pistol, I have a type III in .380 and love that little thing, fits so nice in the hand.

I have been keeping my eyes open for a decent FN 1910 also. thought it would be a good comparison to the 1908.

I will have to check out the Bullard holster line-up.

The wife and I have 938s and really like them. It's a bit of a handful for her but she was surprised that it was easier for her to shoot than the 238. I think the larger grip really made the difference.

I've added a Crimson Trace laser to mine (hers to follow shortly) and love it. The model designed for the 238 fits the 938 very nicely. The pistol is still quite concealable, even with the laser. The night sights are nice, but the laser really quickens the follow up shots in low light.

Hey, loved the review. A comparison would be to the Star M-43 Firestar 9mm, had one I loved it. Well not entirely true, I disliked the weight, which the SIG is about half the weight and a bit shorter on height as well.
I think I may have found a replacement for my Star in the 938.
P.S. Great review.

I bought my wife a p938 with rubber grips, because she liked the way it felt in her hand.

I took that, a Ruger p95, and a Glock 19 Gen 3, all brand new, to a range and filled all with the cheapest range ammo I could get. Only one of the three shot with no problems. The Sig failed to eject every time.

First, I'm guessing it's the reloads (cheap ammo referenced above). Second, the magazine seems too loose at the top. ?? I got some better ammo yesterday (Remington), and the top cartridge still seems to be angling out a little weird, like it might get in the way of the spent cartridge...

Any thoughts about loading the magazine for the P938? The one I own is very hard to load with all 6 rounds. I purchased extra mag and it has the same problem. It's a great gun, particularly for CC but a pain to go shooting with because of the difficult loading.

You can buy a single stack thumb speed loader for it for about 7 to 8 dollars. Your thumb will thank you and if you are at a range that charges buy the hour, that loader will pay for it self the first day. Good luck, shoot straight.

ps: all you need is a little aftermarket one. They work just fine.

Great review. I found this pistol last week at Academy for $695.00. You just made a believer out of me and sold another one for Sig.

When I was admiring the 938 my wife surprised me and said buy it. I carry it everywhere and love it!

If you dont like how rough the texture is on the grips, you can take some fine grit sandpaper to them until they are comfortable for you.

Have a P238, which I love. Just bought the "bigger" brother (9MM) P938 and picking it up Tuesday. A tip for those who are interested, check my source, ammogals.com. $595 and free shipping. My local FFL could not believe the price. Said he can't buy it at that price. I got the two-tone with night sites, Sig laser, 7 &6 mags and Hogue grip included.
What do you think?

I am not having the same problem with the slide stop on mine. I would contact SIG customer service.

Just talked to the local dealer about the two-tone w/holster, grips, and extra magazine and he told me that the $595 price was a special show price.

For me I've always been a "black" gun kind of guy and like mine all black.

I handled the 938 BRG at the dealer and like the way the grips feel and the fit of the gun in my hand.

It will be a near future purchase.

I have the 938 Scorpion with a Crimson Trace laser, absolutely love it. It replaced my BP9 as my daily carry.

Ps; have put about 5000 rounds or so and its been flawless.

This is my third 938. Wife has the two tone with rosewood grips. I had a nightmare and sold it for a glock 26, what a mistake!! Went out yesterday and picked up the extreme and now I feel like I'm home again. Awesome fun all around

I'd strongly recommend the Crossbreed mini tuck holster, comfortable, perfect fit and choice of a few different leathers and cuts depending on your likes or dislikes.