Smith & Wesson Model 642 “The Allure of the Little Revolver” 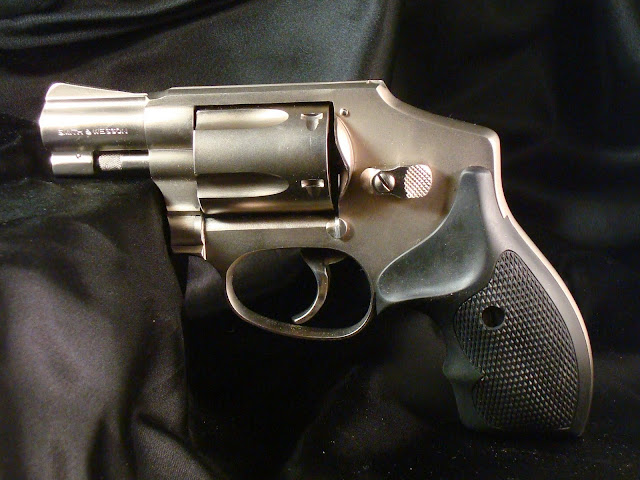 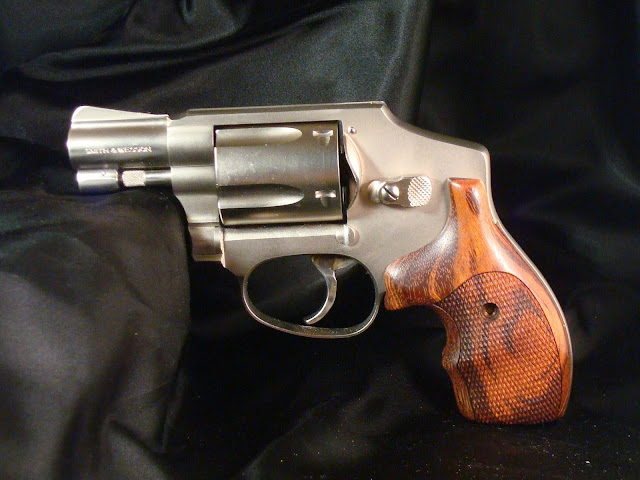 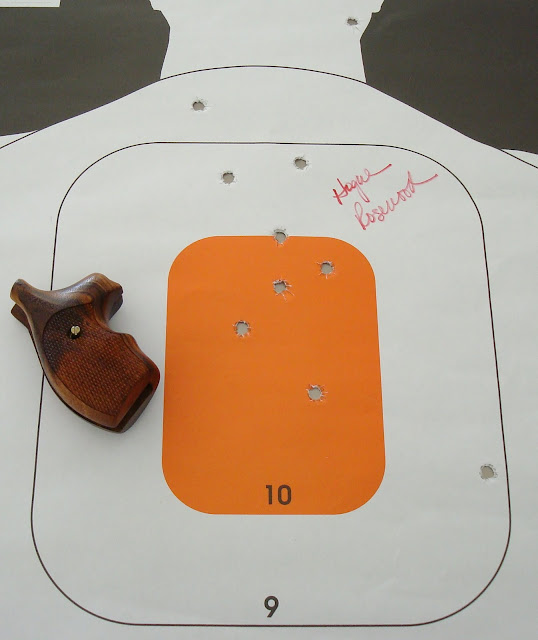 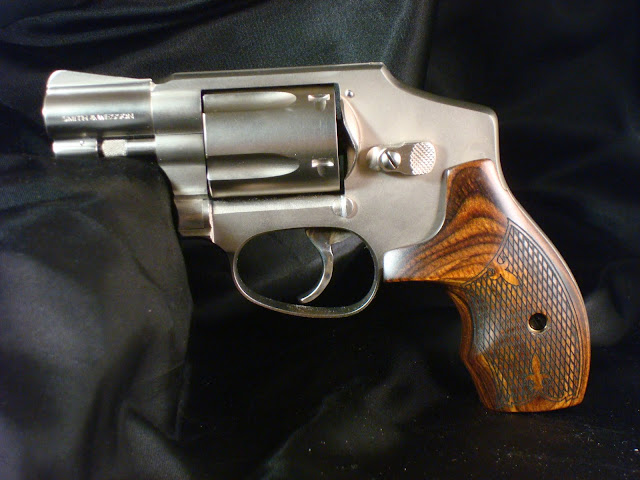 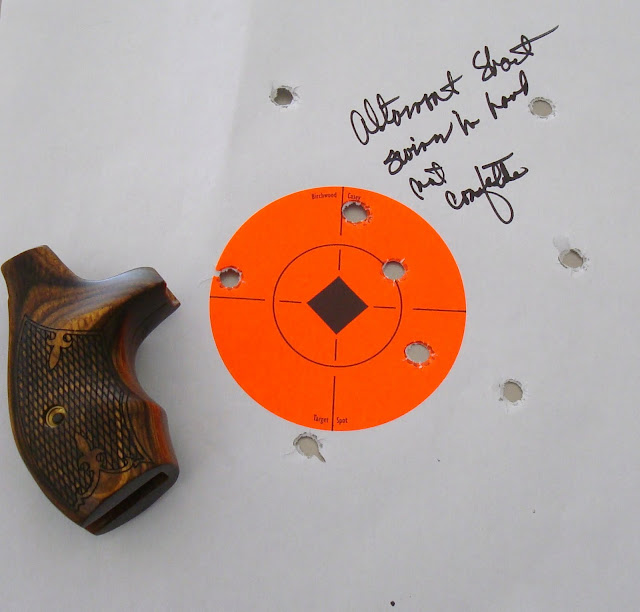 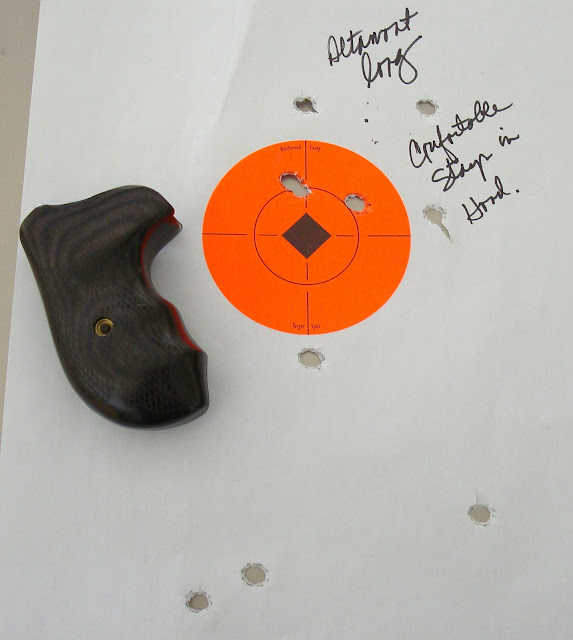 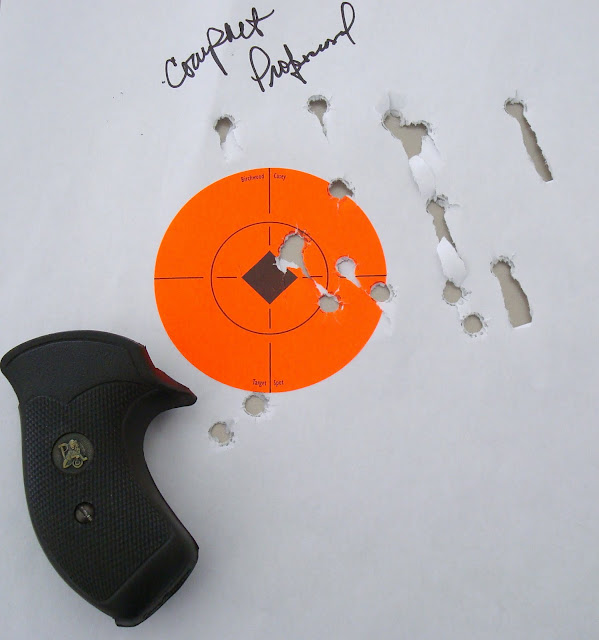 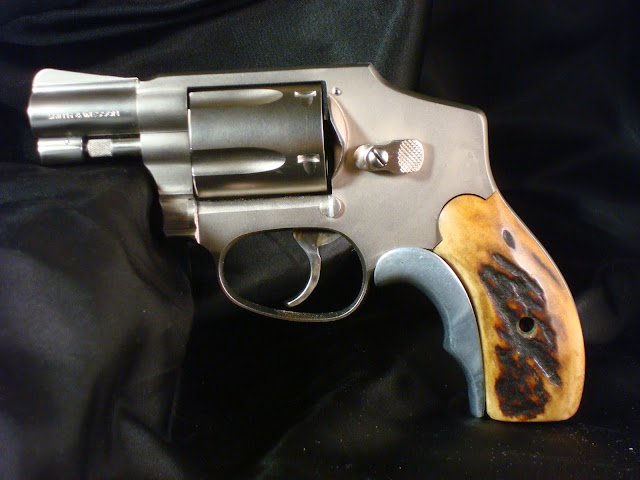 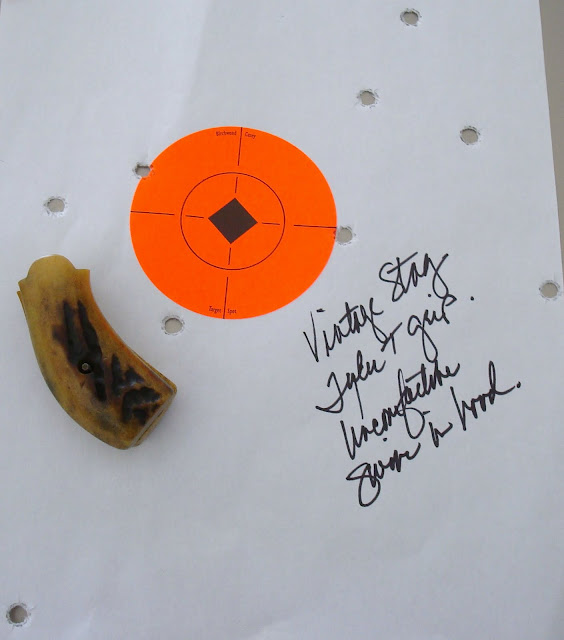 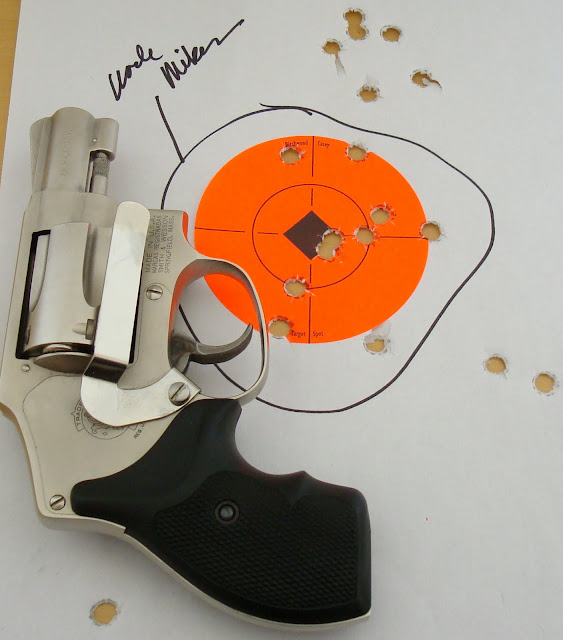 The fit and finish is very good.  No one can say that Smith & Wesson doesn’t know how to make revolvers and the matte silver finish on the aluminum frame melds nicely with the stainless steel of the cylinder.
The 642 has the old S&W ramped front sight which is difficult to see in the indoor range environment but is useable in natural lighting.  Obviously there is no provision for enhanced sighting in low light conditions.
I have suffered through some terrible trigger pulls on S&W’s small frame revolvers but this one is actually quite good and was one of the selling points that made me decide to take a chance on this little revolver.
The regular .38 Special ammunition does not provide much stopping power in its normal loadings.  However there are excellent .38 Special +P loads that do just fine.  The 1.8 inch barrel on the S&W J frame revolvers does not always provide sufficient enough velocity to guarantee expansion but some ammo makers are finding ways around it like Speer’s short barreled 135 grain +P Gold Dot hollowpoint ammunition and for my money I think it’s just hard to beat a 158 grain +P lead hollowpoint.  Call me old fashioned but this load has been putting bad guys to the ground for many years.
Although the J frame is easy to carry in a pocket holster I prefer the Clip Draw attachment that allows you to slide it inside your waistband.  It is easy to carry and easy to shift the revolver to your weak side to a cross draw position when you are driving.
Revolvers are generally considered to be very reliable however the lighter weight handguns can pose a problem when excessive recoil loosens bullets from their casings and they extend beyond the cylinder.  Once this occurs they can jam up against the barrel’s forcing cone and stop the cylinder from revolving.  The most prominent culprit is usually improperly crimped handloads but this can also occur with factory ammo as well.  Just as semi-automatic pistols should be fired with several hundred rounds of your chosen ammunition to ensure that it functions properly you should do the same with the ammo you intend to use in any lightweight revolver.
The 642 provides good combat accuracy within the limitations of a snub nosed revolver.  I limited my shooting mostly to 21 feet but did fire the little revolver at 30 and 50 feet as well.  Alas, I cannot locate those targets so all I can show you are the 21 feet results.  Suffice it to say that that it was possible to hit person-sized silhouette targets at those ranges.  The groups were not pretty but the revolver hit the targets.
Remington 158 grain +P lead hollowpoint: 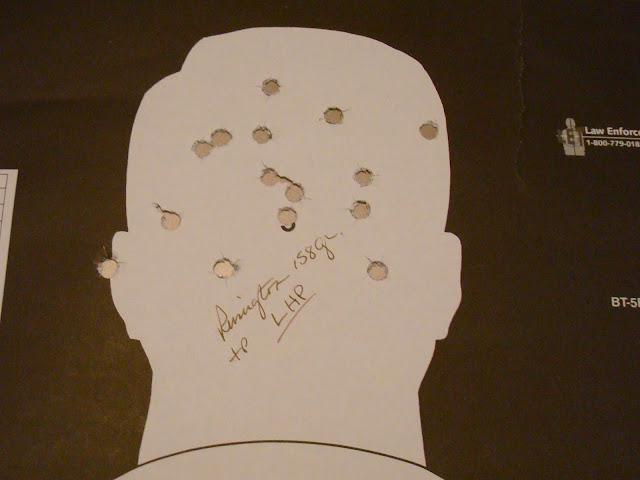 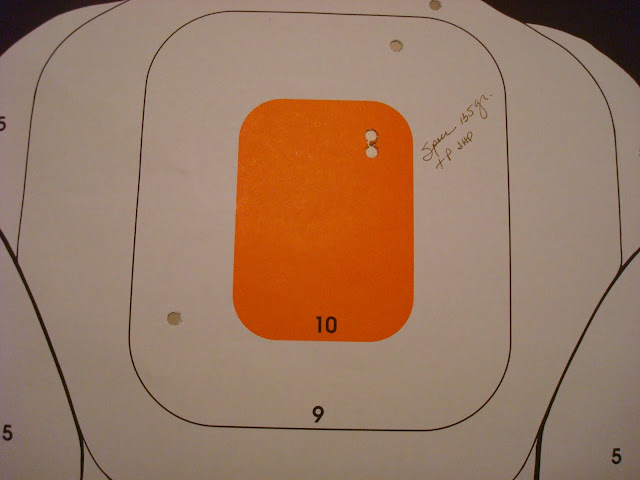 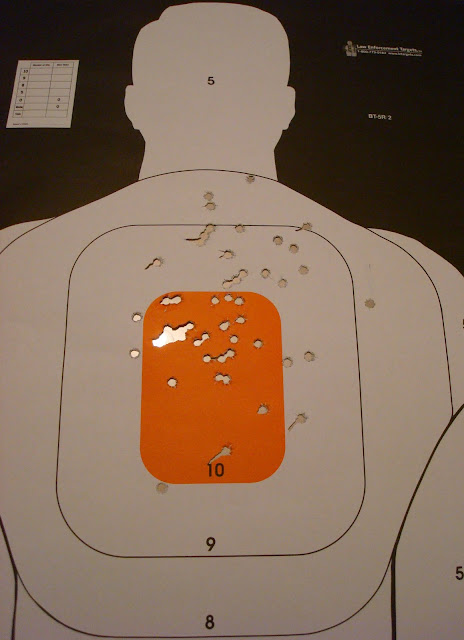 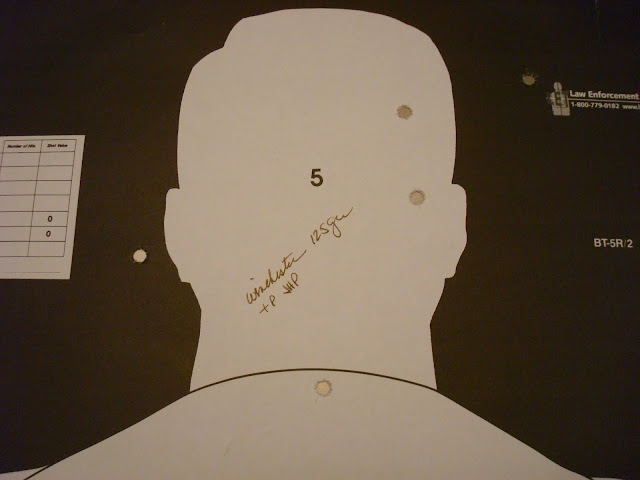 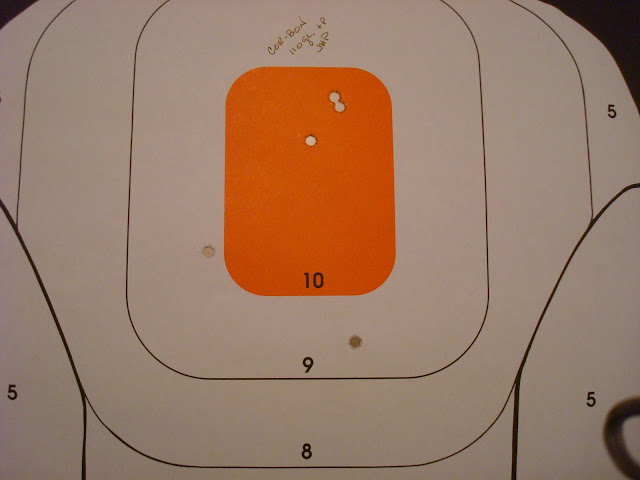 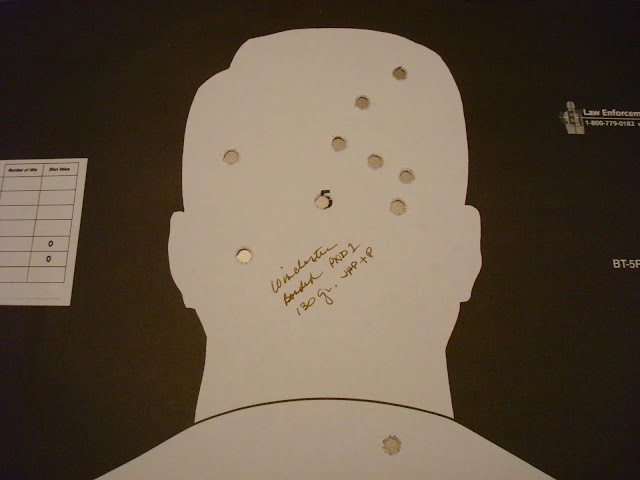 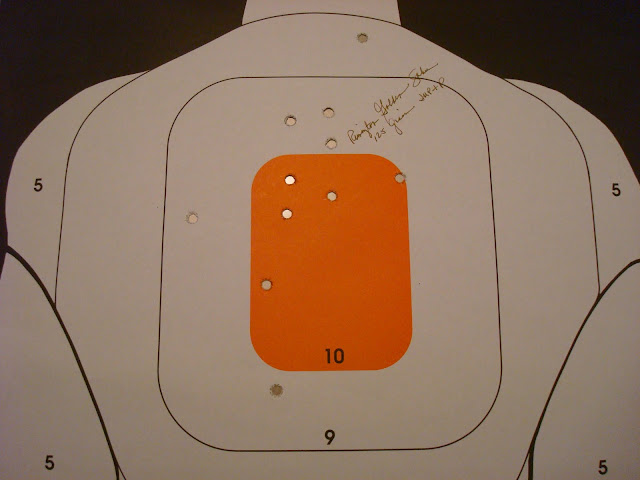 Combination of most of the above: 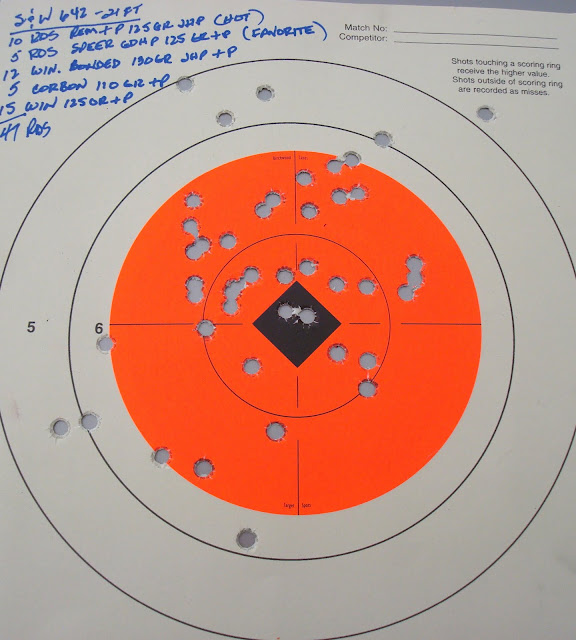 As I pointed out above the allure of the small revolver is great and sometimes can’t be resisted.  The J-frame in .38 Special or .357 Magnum is Smith & Wesson’s bread and butter and they make them in blue steel, stainless steel, aluminum alloy, and scandium.  They currently catalogue about 34 different models of the J-frame in .22LR, .22 Mag., 327 Mag., .38 Special +P, and .357 Mag.  The suggested retails on their website range from a low $616.00 to a high of $1272.00 with most of them in the $800 to $900 ballpark.  They are not inexpensive but just about any gun dealer should have one or two used ones in the shop.  As these little revolvers are not that easy to shoot and their recoil is oppressive for many of the people who bought them you can generally find that they have been very gently used and are in excellent condition.  There are bargains awaiting so if you must have one go shop wisely and spend the money you saved on practice ammo so that you attain the life-saving level of proficiency. 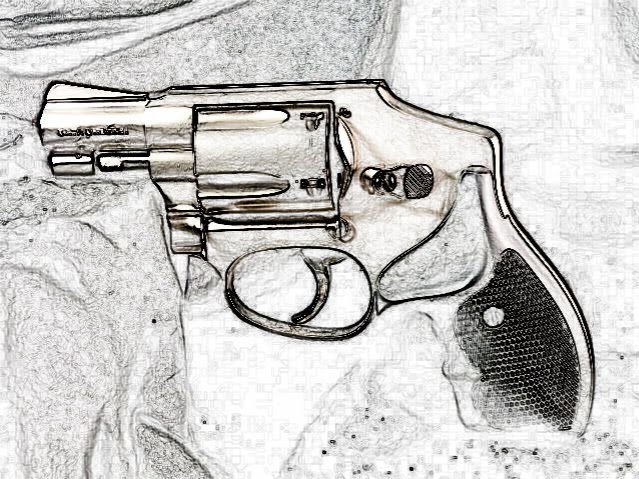 I myself am a big fan of the J frame guns and have owned many over the years. Currently a model 342PD riding in a Kramer pocket holster sees a lot of carry time (in the summer). As a big fan of the J frame I must also admit that they are most definitely not for the novice and require extra effort to become proficient with. Your story did a good job listing the pros and cons of the J frame and I thank you for a very well written review. Hope to see more in the future…

Thank you for the very kind words. I hope you will continue reading.

You did get a great deal!
I recently picked up a colt series 1972 cobra in beautiful condition can't fire +P but a tight little gun with close to 40 years of age to it. I do also agree it's more challenging to shot well especially compared to my semi auto's, great article back to work don't want to keep the pt's waiting too long!
AL

Thanks for the kind words. I am glad you enjoyed the review. Stay tuned for an upcoming review of a stainless Colt DS II with a three inch barrel.

Very concise summary of a real American weapon and one that I suspect will be in the field for a long time to come. Nice that you went to the effort to get results with various grips as well. With all the talk of wonder nines, there is something basic and wholesome about these little weapons. Sure, they may not be in the hands of your city's swat team, but they have been providing a good balance of bulk, weight, and horsepower for more than a hundred years now in various configurations and calibers. Good job. I'm looking forward to that review of the Colt.

I've always been a snubby fan, since way back in the day. It probably originated from reading too much Dashiell Hammett as a kid. My personal preference is for the Colt D-frames. For me, they seem to be just enough bigger than the J-frame S&Ws to be much, much easier for me to shoot well, and just enough smaller than the K-frame S&Ws to carry much, much easier. I'm also a fan of the Colt sights---my 1956 vintage Cobra has sights that are square, blocky and visible, and they're not nearly as good as my mid-60s Detective Special.

I can go back and forth on the merits of the snubby .38. I mean, why not a Glock sub-compact, or one of the other (nearly infinite) variety of subcompact autoloaders? In the end, though, I just like the snubby. I think that the snub-nose .38 is like the 1911 .45, and that for Americans of a certain age, it's impossible to be entirely objective about them.

J-Frame fan here too. Just picked up a Model 36, made in the 70's for 200 bucks. I filed off the hammer spur(now all DA) and put on a Hogue Mono grip and it's a nice lil carry piece!

Just bought a s&w 642 airweight for my first pistol and my ccw. At 25yds, I got all five in the head of a body target. With practice I'm sure my groups will tighten up.

The J Frames take some getting used to and the S&W 642 adds the element of some trigger pull issues.
But after having said that I have to say that once you 'get it' the 642 is the best "Carry" guns I have ever owned.
"Snubbys" are designed for close range self-defense and that is what they excel at.
They ain't for deer hunting.
At distances up to 30 ft (10 yds) my 642 will put as many rounds in a 10" pie plate as I have time to shoot.
Quality is high and the finish on the alloy(silver)guns seems to be holding up fine.
I would buy another one in a heartbeat.
You can always regrip and get a trigger job (it won't be wasted money) but the gun, as it comes out of the box, is a hell of a value and a fine handgun.

Average Joe--liked your review on the S&W 642...like you I have bought and sold a number of these, tried some of the smaller autos, but always transition back to the J-Frame. I carry a Gen4 Glock 26 for a EDC/Bug (work related), but really like the option of a J-frame in flip-flop/shorts weather. Like you I also like the old FBI load (158 gr. SWC +P), tghat's the biggest reason I'm not a fan of the .30acp--big bullet, little gun--still a great combination and choice, even for today.

This is timely (to read anyway). I've had a 442 for years and frankly hate(d) it. The recoil is ridiculous and I'm no panty waste. I always practice with rapid double taps for obvious reasons. The snubbie is brutal to keep in a silhouette within 7-10 yards rapidly. It's that the trigger pull is too long to the point you are going to wiggle before detonation.

Regardless, IEEE a new 642 on sale for $269......and then there was silence? I've tried three different grips on the 442 but only the uncle mikes makes sense. The pach was worse and the elongated hogue made it too big for pocket.

I think I'm going to buy it simply to get a more modern trigger and for that price I can sell it for that much. No risk. My 442 is over 20 years old and only 110's shoot well. Any 125+ gr produce too much recoil to include the white box 130 fmj's from wallymart.

158's? Fogeddabbout it eh? The 110's from. Hornady make sense. The design is timeless as is the reliability and weight but shooing them is literally a pain....