The Kimber Ultra Carry models are the company’s smallest pistols sporting 3 inch barrels.  Now, in my last review I evaluated a three inch barreled 1911 model pistol and was fairly unhappy with it because of two major issues one of which was accuracy; despite the pistol’s excellent sights it was just did not shoot to point of aim for me which is very frustrating.  As you will see I am very pleased with all aspects of the Kimber Custom Shop’s RCP II including the accuracy and that is in spite of the fact that this pistol does not have sights (at least not in the usual sense).   The acronym RCP stands for Refined Carry Pistol and the refinement process involves making this handgun accurate, snag free and easy to carry. 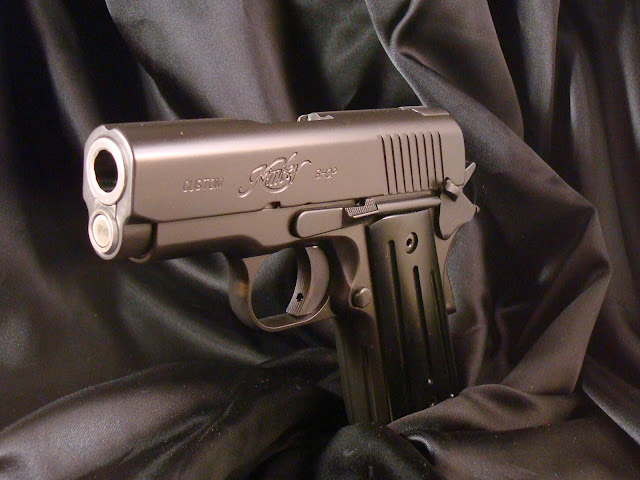 In other words Kimber is trying to make this pistol the ultimate concealed carry weapon.  However, being accurate without sights sounds like  a conflicting mission but the Kimber Custom Shop actually manages to pull this off and here’s how they did it:
1.  1. For accuracy they put a match quality barrel on the slide
2.  2. To make it snag free the Custom Shop bobbed the hammer and gave the pistol a complete “carry melt” job.  You will not find a sharp edge anywhere on the pistol.  When most manufacturers engineer a melt job on their pistols they miss the bottom of the grip frame’s backstrap and they miss removing sharp edges from the front and rear sight.  Well, the Custom Shop at Kimber remembered to round off the bottom of the grip frame and they handled the issue of sharp protrusions on the sights by using a “sight trough” running down the top of the slide from front to back.  And guess what…it really works.
The sight trough is not going to win you any bullseye championships but you may be surprised at how it might just increase your time in an IDPA match.

Let me provide a perspective on how this sighting arrangement offers accuracy and speed.  As a member of NYPD’s stakeout squad officer Jim Cirillo conducted surveillance on the Big Apples most violent criminals; people who were prone to violence and gunplay at a moment’s notice.  Cirillo became a legend coming out on top in over 17 gunfights.  Based upon his vast experience in high stress shootouts Cirillo was always examining ways to improve accuracy and speed because both of those components are equally important to surviving a shootout.   One of his alternative sighting methods involved a fast method of acquiring your target by indexing the silhouette of the rear of your handgun.  Cirillo felt that your conscious mind wasted precious time concentrating on aligning the proper sight picture when your subconscious mind already knew what the silhouette of the of the handgun looks like when it is on target.


Cirillo’s radical concept flew against the wind of the traditional firearm instructor whose mantra has always been “front sight”, “front sight”, “front sight”.  However I think it is easy to understand that it does take more time because your mind must coordinate with your eyes and actually try to align the front sight with the back sight and then the front sight to the target.  Now in precision bullseye shooting that is what you need to do to get the best score however precision bullseye shooting and real life defensive shootouts have different outcomes; coming in second in a bullseye competition gets your name listed in your club’s newsletter while coming in second in a defensive shootout gets your name listed in your local newspaper’s obituary section.
After leaving the NYPD Cirillo became a sought after firearms trainer; he instructed federal agents, other law enforcement departments, and eventually civilian shooters.  He began to teach students this method by putting black electrical tape across their rear sight causing them to examine what the silhouette of the rear of the pistol looked like when it was on target versus what it looks like when it strays out of alignment.  The practical concept is really pretty simple.  If you move the pistol up to eye level and the only part of the pistol that you can see is the rear of the pistol then you are properly aligned.  If you can see the top of the slide or any portion of the left or right side of the slide you are out of alignment.  Cirillo found that most of his students shot just as well using his slide indexing method as they did using their sights and some actually shot better.
I can tell you that I shot the RCP just about as well as any other pistol of the same size.  I can also tell you that not fixating on traditional sight alignment was pretty liberating and allowed me to make quicker follow-up shots.  Now I don’t know if this is a side effect of the Cirillo method or not but the little Kimber RCP rewarded me with tighter groups when I shot it faster.
Specifications
Kimber Ultra Carry RCP Performance At-A-Glance
Let’s examine the individual characteristics of the RCP:
1911 style pistol have a reputation of ergonomic comfort and the little RCP follows in this tradition.  While the grip frame is small there is just enough of it for me to hold onto with all three fingers.
The fit of the slide is very tight with very little lateral movement.  Also, the slide moves freely and smoothly with no perceptible hitches. 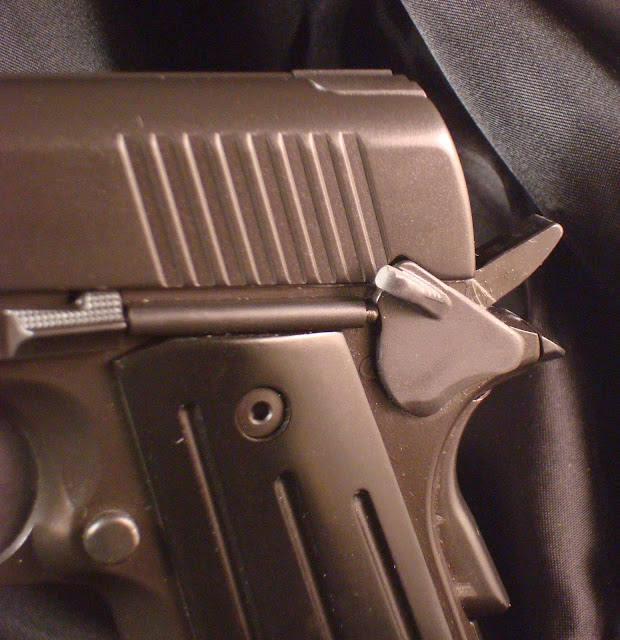 As I mentioned above the Kimber Custom Shop went to great lengths to insure that the pistol was rounded, snag free, and as easy to conceal as they could make it.  Because of this it does not have an ambidextrous slide safety.  The slide safety sits on the left side of the pistol and is actually fairly traditional.  The Gander Mountain in Eden Prairie recently took in a Colt 1911 made in 1914 and the abbreviated slide safety lever on the RCP is almost identical to the one that John M. Browning designed on the original 1911 Government Model.
The fit and finish of the RCP is excellent.  Now it’s not going to be the prettiest pistol at the range but that is not what it was designed for.  This is a working, defensive pistol.  However, I also realize that “beauty is in the eye of the beholder” so if you think that English Bulldogs are beautiful then the RCP will be the apple of your eye.  The aluminum frame of the RCP is given a matte gray Kimpro II finish while the steel slide is produced with the Kimpro II matte black finish.
As mentioned earlier…they are excellent for what they are and for what they are intended to do.
The hallmark of the 1911 is its smooth and easy trigger pull.  Occasionally I will find a bad one but never on a Kimber.  The trigger pull on the RCP averaged 5.9 pounds on my Lyman Digital Trigger Pull Scale.  Some may prefer a lighter pull but I felt that the crisp, smooth pull of the RCP was excellent.
Anyone who has read much on my blog knows that I am a big believer in the .45 ACP round as a great defensive cartridge which is based on its reputation earned through 100 years of military service.
At 1.15 inches wide, 4.74 inches tall, and 6.8 inches long the RCP is not difficult to conceal in an inside the waist band holster.  I have been carrying mine with a Clip Draw attachment and it slides easily in and out of my waistband.  I have no problem with it moving around and no concern about it falling out.  If my lifestyle was much more active I might want to find an inside the waistband holster that attaches to my belt with an active retention devise but for the current time the Clip Draw suits me well.
Absolutely no break in period was required and the RCP functioned flawlessly as I shot it one handed while moving during tactical drills.  I also fired various defensive rounds through the RCP and she ate them up without any problems whatsoever.
The accuracy as you will see in the photos below is better than should be expected based upon the sighting system employed.
Stationary Targets
10 rounds at 21 feet (not bad for a pistol with no traditional sights) 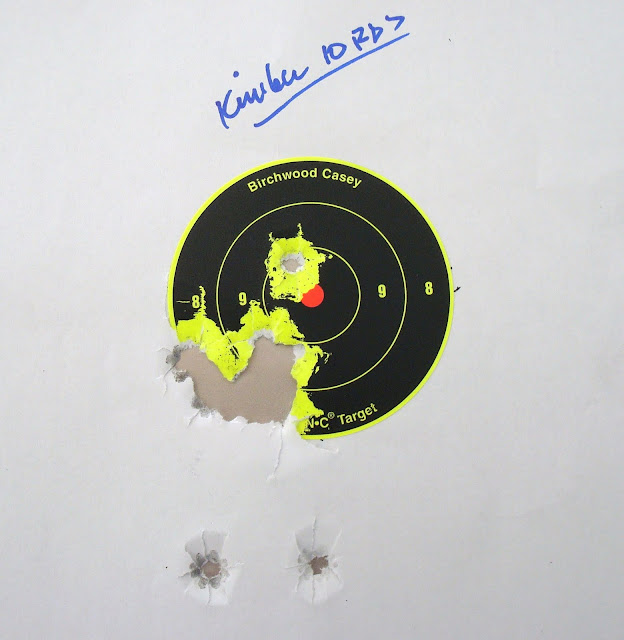 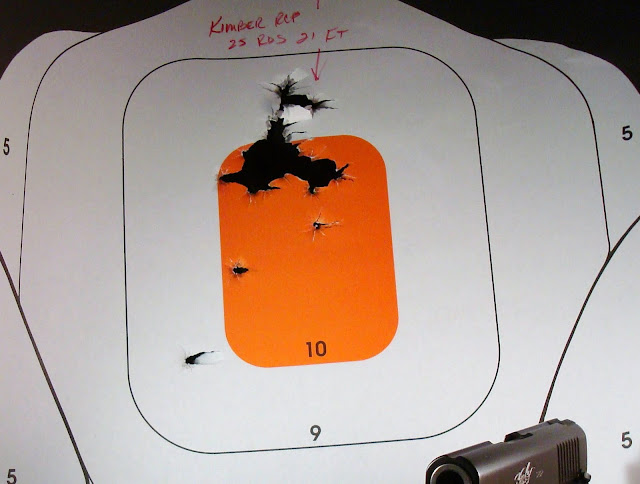 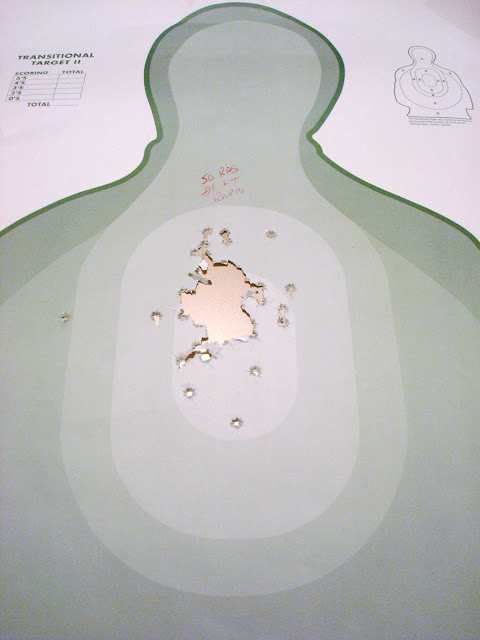 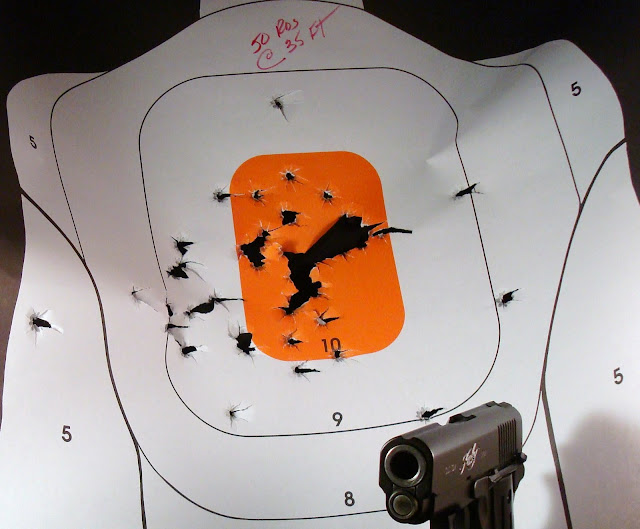 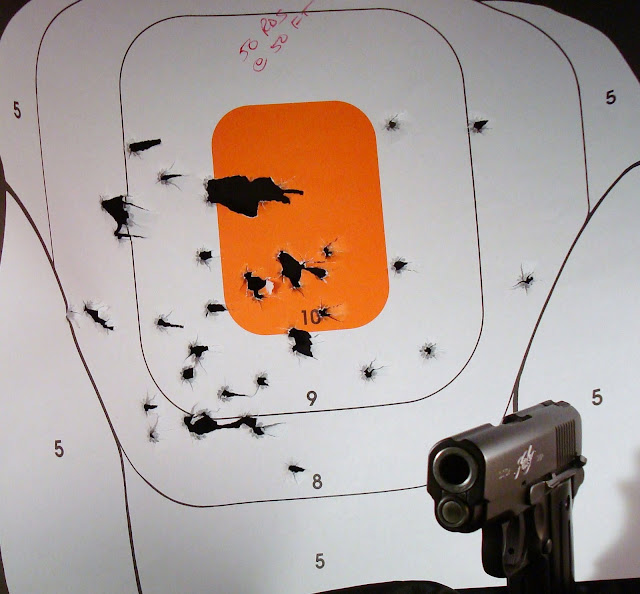 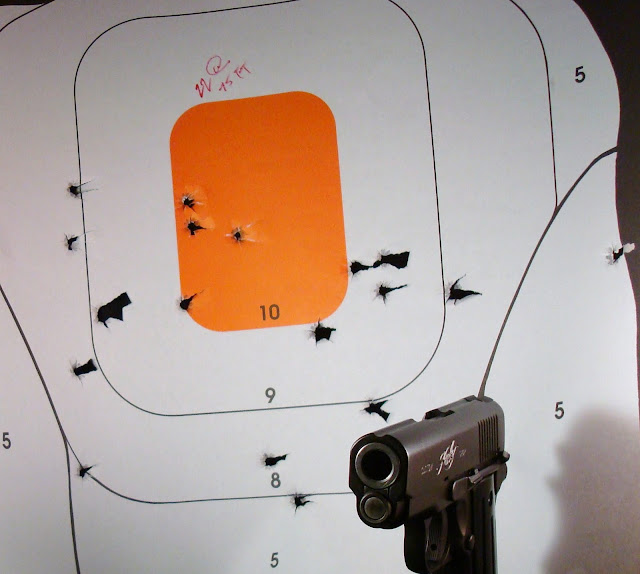 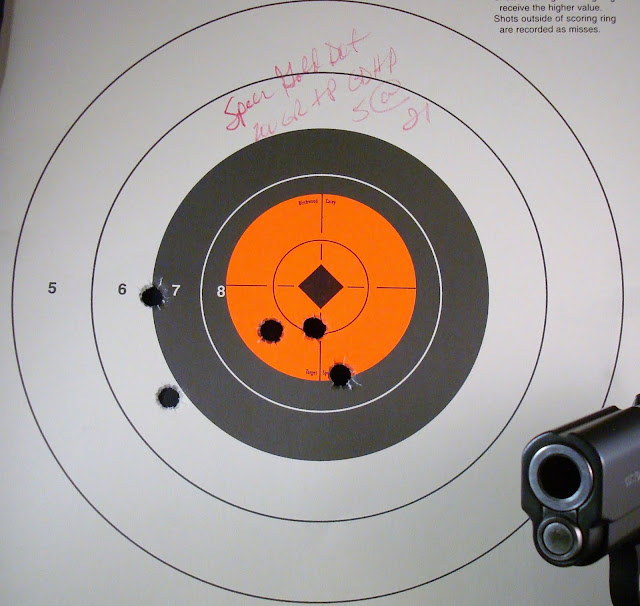 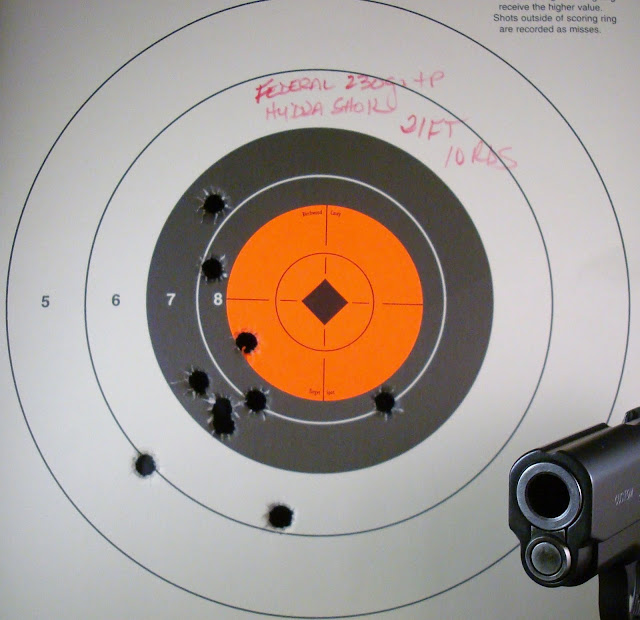 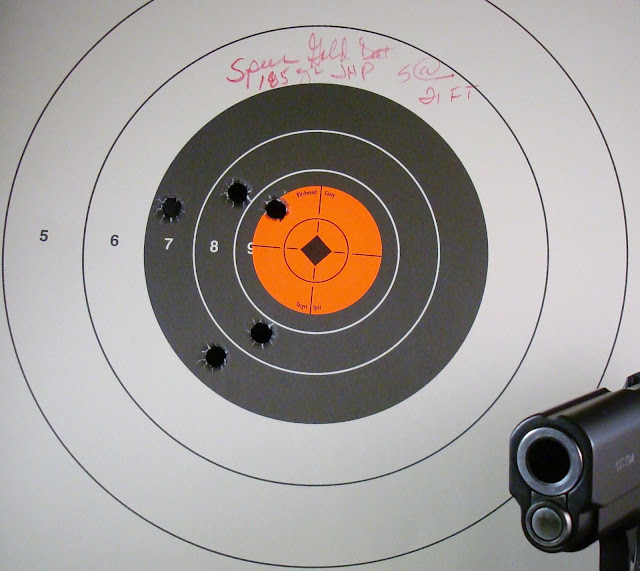 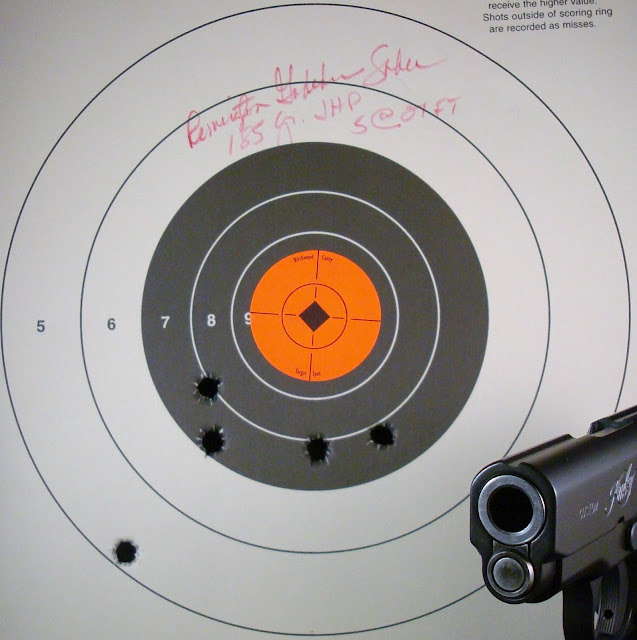 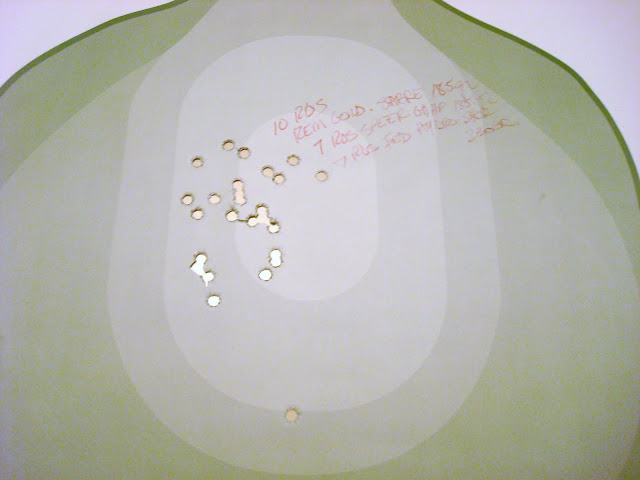 Tactical Targets (all targets fired while moving in different directions at ranges of 21 to 40 feet).
Low light tactical box drill shooting with strong hand only 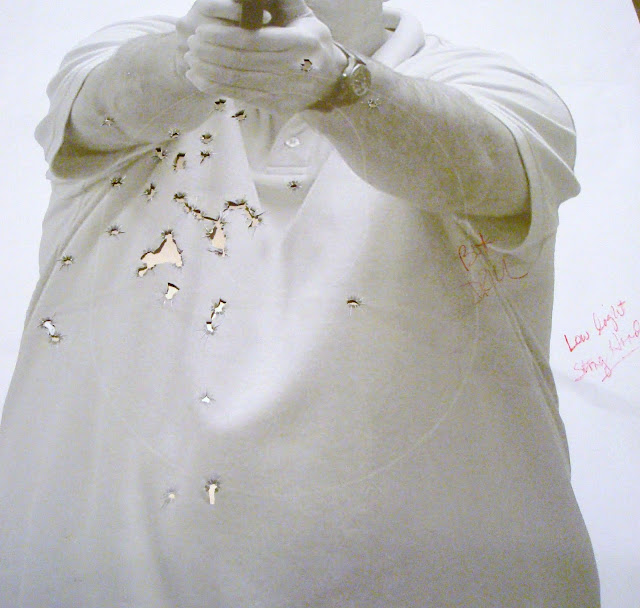 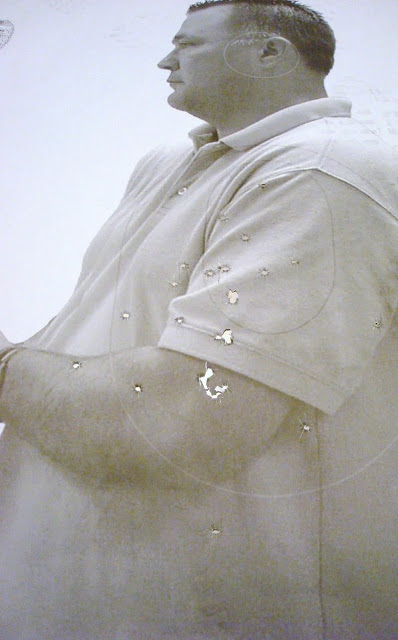 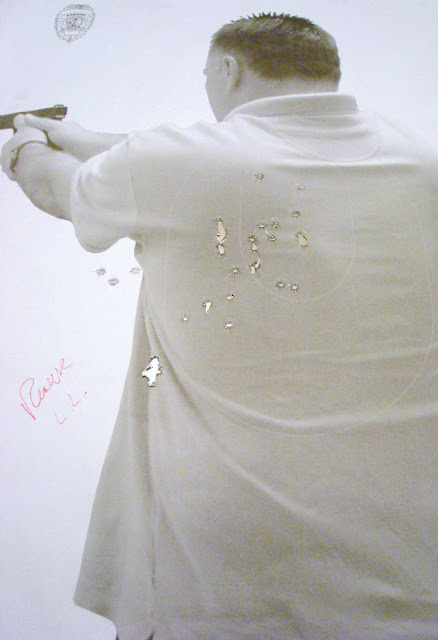 Hey Joe I think the slide alignment method still works on guns with sights. SO why not have them if you need them at a greater distance (ie 15 yards+). In addition I know your a big 45 fan but in those short barrels .45s dont have the same perf as in the longer 4.25+ barrel length. I think going with something like the Springfield EMP in either 40 in 33oz package or 9mm in the 26oz package would appeal.

As you can surmise the RCP is a close quarter weapon. It's advantage is really fast follow-up shots. I think it's fine for most self defense concealed carry applications. If the SHTF I would be going for a full sized pistol as well as a 12 gauge shotgun or appropriate carbine. As for chroming the Kimber slide...NEVER IN A MILLION YEARS. The Kimpro finish has some lubricating qualities that Duracoat does not provide. Glocks can use a little dressing up; Kimbers come that way standard.

do you carry this pistol "cocked & locked"? if so does that defeat the "snag free" undersized hammer?

Yes I carry it cocked and locked and "no" the hammer has not snagged on anything yet and I don't believe it will. It is smooth with no sharp edges to bind on anything on the draw.

Thank you very much for your review. I was trying to decide between ulra rcp II and the ultra CDP II because of the sites. I am going with the rcp with lg

Thank you for your input on the RCP, I have owned one for a few years now, 2014 to be exact, my second magazine load at the range jammed the gun, I had a loaded round that wouldn't go into battery, and for the likes of me I couldn't get the slide back to free it and remove the round, I had to take it to my smith and he promptly removed it, I might have been a little too gentle on my gun, he said I really needed to muscle it, good to know, I took it home and gave it a good cleaning and lube, but haven't fired it since, since then I have purchased a Ultra Rapture II, 45 acp, and plan to take both guns to the range and make a day of it, I really don't think I'll have any more problems with my RCP, the jam very well could have been me, I was changing grip styles when the jam happened, I like the gutter sights, and mine is ambi with slide safety's as well as coming with Crimson Trace Laser Grips, which are spot on, the RCP is an awesome concealed carry gun, as is the Ultra Rapture II, I find I like the 3" barrels on my EDC guns, I save my full framed guns for home and the range, or shoulder holster carry...once again thank you for this review...

Nice review... I have Series I Ultra CDP, fine pistol, accurate and reliable and "point shoots" really well (no sighting at all, just focus on center mass and pull). I added a arched mainspring housing and a magwell. Never a problem snagging from my IWB holster. Not sure that the benefits described in the RCP would be worth a switch... but sounds like a neat pistola. BTW, I also sometimes carry a Kahr P9 (9mm) Black Diamond with night sights, a little slimmer and significantly lighter for summer carry and an XLNT shooter... Skoal!