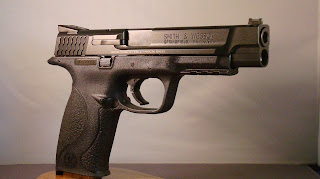 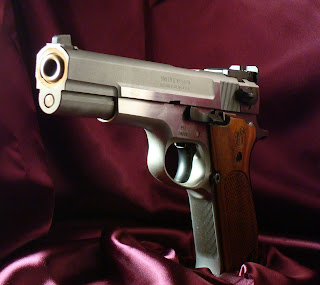 In this two part series we look at two 9mm pistols built by Smith & Wesson specifically for competition: the M&P Pro 9 and the model 952. While both are built for competition the M&P is seems more adept at combat competition while the 952 is more destined for bulls eye type matches.
This week we look at the polymer framed M&P Pro 9. 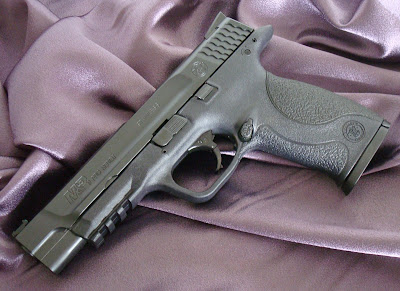 The M&P semi-automatic series of pistols was introduced in 2005 in caliber .40 S&W and seemed a somewhat risky a venture for Smith & Wesson at the time. First of all they christened it with the M&P (for Military and Police) moniker which came to fame as the name for their .38 caliber revolver when the last century was in its infancy. The medium or K frame .38 M&P was eventually renamed the Model 10 and is still in Smith & Wesson’s online catalogue today. They must have produced millions of them in the popular four inch barrel configuration while it was also offered with barrel lengths of 2, 3, 5, and 6 inches. The M&P or model 10 was a mainstay in police holsters until the wondernines began to usurp them in the late 1980’s. So any semi-automatic pistol bearing the proud and storied name of M&P has a lot of history to live up to.


The second reason that this new series looked risky is that Smith & Wesson tried polymer framed pistols before with the Sigma series and the SW40 and SW99 line which never really took off with the public. The Sigma series prompted a lawsuit by Glock while the SW40 and SW99 pistols were too similar to the Walther 40 and 99 models to earn the Smith & Wesson branded pistols any distinction of their own.


With the third period of polymers Smith & Wesson found acceptance. The M&P is a striker fired pistol with a very ergonomic grip shape that has three changeable backstraps. The grip frame is Zytel polymer with a stainless steel barrel and slide. The hardened slide is finished with Black Melonite; this is one tough pistol with the slide attaining a rating of 68 on the Rockwell hardness scale. Since I know Mike D. will ask, the Rockwell hardness scale is a measurement of the pressure it takes to dent or cause deformation in materials, usually steel. As a comparison axes and chisels have a hardness range of about 45 while fine tempered and heat treated knives generally rate in the low 60s. Therefore, again, this is one tough pistol.
With all of that, let’s look at the specs for this pistol:

The differences between the Pro 9 and the regular M&P pistol are simple. The standard M&P has a 4 inch barrel while the Pro 9 sports a 5 inch barrel giving it a longer sight radius. The extra inch of barrel helps accuracy by offering more stabilization and slightly more accuracy to the bullet and also improves the sight radius.

The trigger pull on the Pro 9 has been smoothed out and lessen from a 6.5 pound pull to a 4.5 pound pull. The trigger pull sold me on the weapon when I handled it in the gun shop. I think many people do not understand the importance that trigger control contributes to accurate shooting. The reset on the trigger is also short which makes follow-up shots easier.

The last feature that distinguishes the Pro 9 from the standard M&P are the sights. The Pro 9 has Novak Reduced Glare Rear Sights that are adjustable for windage and a Novak Green Fiber Optic Front Sight.

The advantages for combat competition are simple yet advantageous to the shooter; a longer barrel for more velocity and bullet stabilization, coupled with a longer sight radius and a smoother, lighter trigger for enhanced accuracy. A faster trigger reset along with easier to see reduced glare rear sights with a green fiber optic dot up front which make target acquisition and follow-up shots quicker. The green fiber optic front sight is sharp, clear and very bright in outdoor light where many of the combat competitions take place.

I am currently taking the advanced handgun course at the range where I shoot and I can’t wait for my Blackhawk Serpa holster to come in so I can use it in class.

As I mentioned earlier this is a very ergonomic pistol and the medium grip felt great in my hand and the five inch barrel gave it a perfect balance. 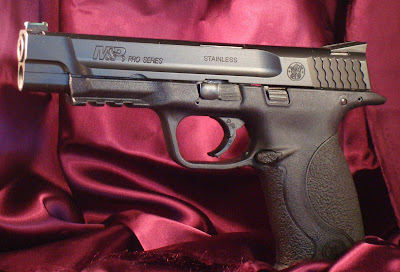 Here is the 21 foot target and you can’t ask for much more accuracy at this range. 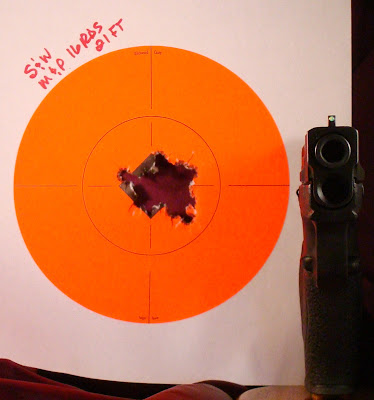 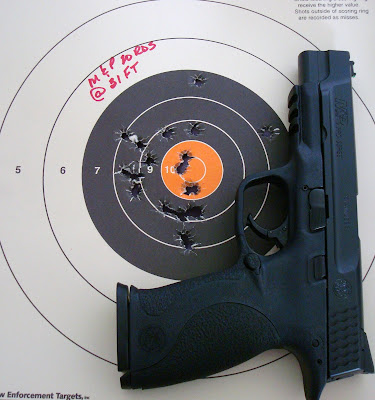 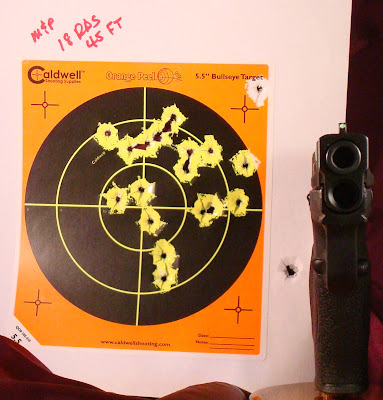 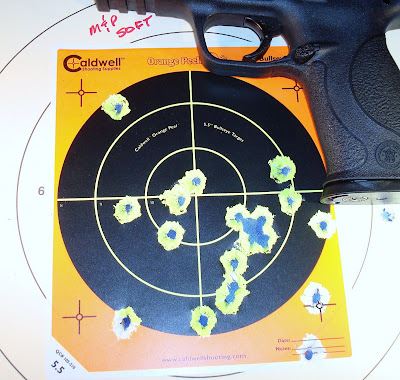 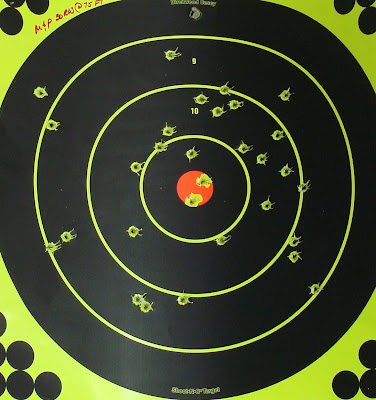 While this is billed as a competition pistol, the 17 round magazine and other handling attributes make it a comforting tool for self-protection. Lastly, it is important to distinguish the difference between a combat and bull eye competition piece. The bull’s eye pistol requires the most accuracy that you can possibly squeeze from the pistol. This usually means target sights which are adjustable (and therefore more fragile than sturdier combat sights), ultra light trigger pulls, and very tight tolerances in the fit of the pistol's components which may play havoc with reliability in some ammunition. The combat competition firearm needs to be accurate but also needs to be designed with features that make it utterly reliable, allow for fast target acquisition, and conducive to being fired quickly. In many instances the price for complete reliability, fast target acquisition, and fast shooting comes as a compromise in accuracy. The S&W M&P Pro 9 is a great blending of all of these components without sacrificing much in the way of accuracy.
Posted by Average Joe's Handgun Reviews at 11:24 PM