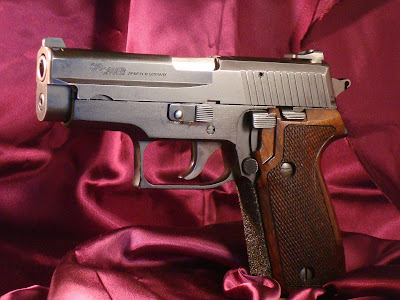 The SIG P225 is one of my favorite SIG pistols but SIG dropped them from their US catalogue many years ago (we’ll get into that later). Well, the gun buyers should rejoice as the military and police version, the P6, has hit the secondary market and I can’t hit a gun shop or sporting goods store without running into 3, 4, 5, or 6 of them and when those are gone another half dozen pop up in short order. For the Average Joe who has always wanted a SIG but could not justify the price, these surplus bargains are going for between $250 and $300 which is well below the value of such a high quality 9mm pistol. Let’s look at the specs and then we’ll talk about the pedigree of these fine firearms.


Schweizerische Industrie Gesellschaft (SIG) got into the pistol business with the .45 ACP Model 220 which was marketed in the US in the late 1970’s as the Browning BDA. I had one offered to me in 1977 but turned it down since it did not look like a Colt Model 1911…ah, the mistakes of youth. When the West German police went looking to replace their Walther .32 caliber pistols with something a little more potent (global terrorism raising its nasty head and the Soviet Union just a stone’s throw away) they put out the word that they were looking for a single stack 9mm pistol. They chose three: the Walther P5, the Sig P6 (or 225 in its civilian designation), and the Heckler & Koch P7. All were fine quality pistols (sadly none are still in production) but the SIG P6 was the least expensive of the trio and as the German States were authorized to select from these three the SIG got the lion’s share of the business.
The SIG P6 is a scaled down version of the SIG P220 .45 ACP. It is slimmer and maintains the graceful lines and classic profile of the P220 with a slightly more pronounced curvature of the backstrap that most people find very accommodating.


The P6 was an instant hit and became the authorized sidearm for the Swiss and Swedish police forces as well as the Canadian Navy. 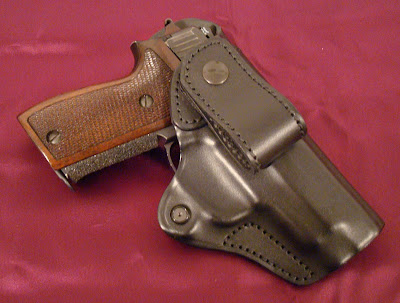 In 1995 the German police decided to look for a new pistol and began to take the P6 out of service. This has begun the boon for those in the U.S. who have always wanted one. The trade off of police trade-ins is that they were carried a lot, but fired very little. Expect to see the normal holster wear of a pistol that was in service for 20 years, however, unlike military pistols, the police pistols are not fired frequently and every one that I have examined recently is in great shape internally with bores that are in excellent condition. On most pistols the holster wear is most prominent on the slide and for what you are saving on the pistol you can have it refinished if the character-wear bothers you. The police trade-in pistols have an unusual hammer that has a hooked spur instead of the complete circular spur that most pistols which feature an external hammer (including SIG) employ. There are two stories floating about the internet that offer an explanation for the hooked hammer. 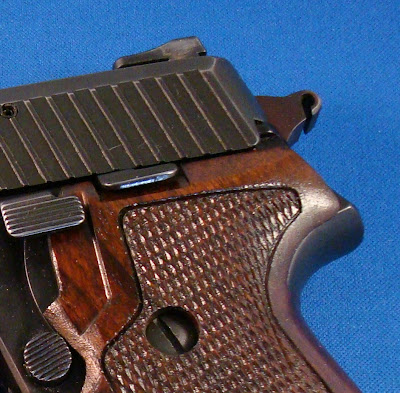 The first one surmises that the hook was cut into the hammer by the police armorer whenever the pistol was dropped on its hammer. This seems unlikely as there would be better ways to keep track of a potentially damaged pistol and, if this were true, then every pistol being imported into the U.S. has been dropped on its hammer leading one to think that there are a lot of butter fingered police officers in Germany and that is certainly not their reputation. The second internet explanation seems more plausible and states that a breakaway safety strap went around the hammer and through the trigger guard. When the police officer returned from his/her shift, if the safety strap was missing it was a visual indication that the pistol had been fired and the officer would thus have to explain and prepare a report on the situation. I am still looking for a more official source of information on the hammer hook and will update this when my curiosity is satisfied.


Most of the trade-in packages I have seen offer just one magazine (in rare instances two are available) and may also include the pistol’s duty holster. Average Joe found a different offering at Gander Mountain. One pistol contained unmarked checkered wooden grips (with the original plastic ones in the box), skate board tape applied to the front strap for a sure hold, and Heine Straight 8 Night Sights. This one was priced almost $50 more that the standard trade-in, but did you see that I said Heine night sights? I snapped it up immediately. Besides the bonus of the wood grips and the Heine night sights, the double action pull of the trigger breaks at 9.5 pounds as opposed to the published specs which put it at 12 pounds. I don’t know if the trigger was intentionally slicked up or eventually wore into the lesser pull but it is indeed a plus.


About eight years ago SIG dropped the P225 from its commercial line-up. They had a couple of newer design which they felt made the P225/P6 obsolete. Sig offered the P239 (reviewed on July 26th) as their new compact, single stack 9mm for those who wanted a smaller pistol (additionally, the 239 can be had in .40 S&W or .357 SIG). 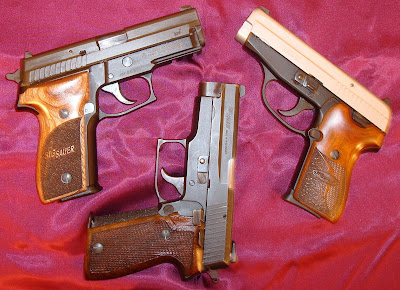 
In comparing the two, I prefer the P225/P6 for better overall ergonomic feel. The P239 is a little shorter, but seems fatter in my hand. SIG also brought out the models 228 and eventually the 229 (reviewed June 20th) which they consider to be compact (although they seem pretty big to me) and contain double stack magazines for those who feel that they need to carry more ammunition.


Time for the Targets:


115 grain hardball ammo was used on all targets fired for range. 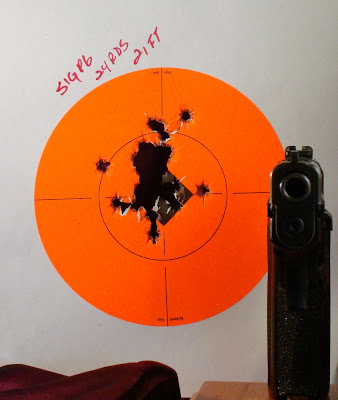 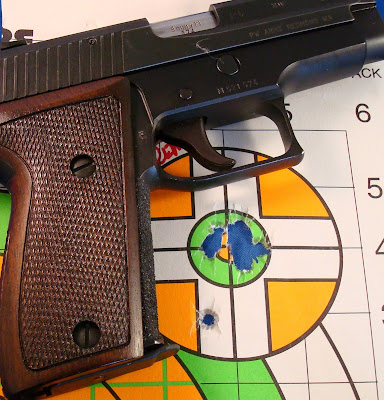 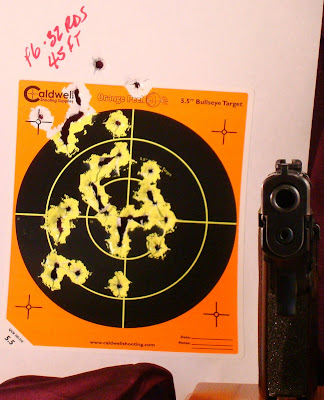 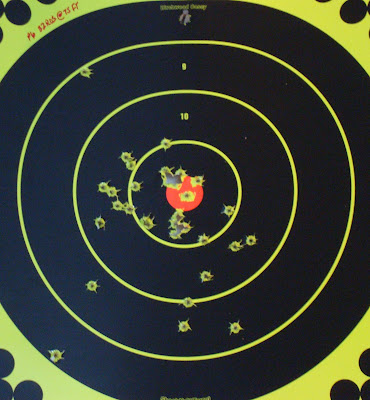 All targets fired with defensive ammo where fired at a range of 21 feet. 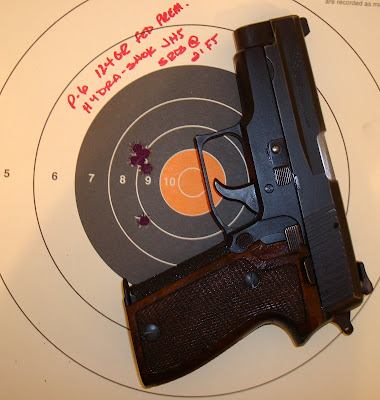 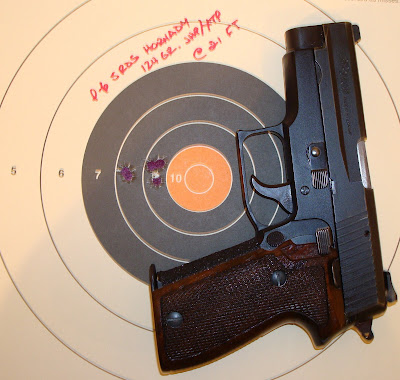 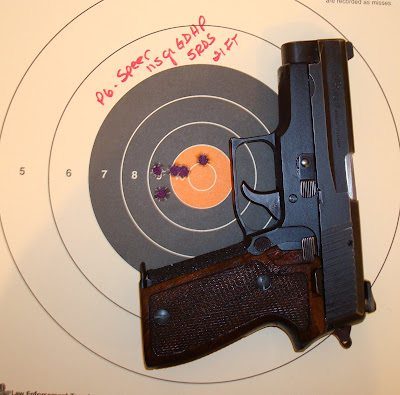 The P225/P6 is a classic and it seems a pity that they felt the need to discontinue such a fine pistol. The ergonomic fit of the pistol is superb for me and the pistol offers all of the accuracy for which SIG is famous in a slim easily carries piece.
Posted by Average Joe's Handgun Reviews at 10:29 PM