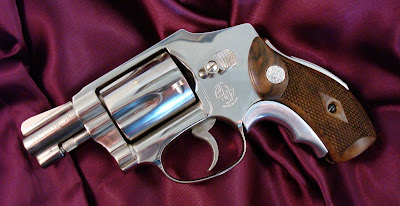 This extremely handsome revolver is a part of Smith & Wesson’s Classic line of discontinued models reintroduced to the gun buying public. The model 40 is built on S&W’s small “J” frame and was originally dubbed the Centennial during the period when S&W gave their models names rather than just numbers. The Centennial/model 40 debuted in 1952 and bowed out in 1974. As the moniker Centennial infers this model was introduced to commemorate Smith & Wesson's 100th anniversary.
The Centennial featured a grip safety and enclosed hammer which were first seen on the “Safety Hammerless” models first produced in 1887. 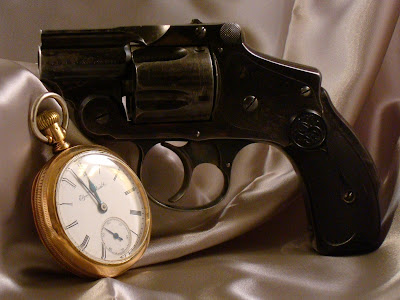 The grip safety was added so that if the revolver was dropped there would be no concern with an accidental discharge. Additionally, one of the more poignant reasons for the grip safety was that Daniel B. Wesson heard that several children had been killed when they found their parent's loaded revolver and subsequently shot themselves, a sibling, or friend. Wesson asked his designers to make a revolver that would not be easy for children to fire. They removed the external hammer so that it could not be cocked. Therefore it could not be fired in the single action mode which has a very short and light trigger pull. They also added the grip safety believing that most small children would not have the dexterity and strength to both depress the safety and manipulate the double action trigger with its long pull. The Safety Hammerless was also a break-top revolver which, of course, was outdated by 1952 and the Centennial employed the swing-out cylinder that is still in use today.
The Centennial/model 40 became very popular with police officers in the late 1950's and 1960's as a back-up gun. By then the police were trained to only fire in the double action mode so there was no need to cock the hammer. The sleek internal hammer meant that there was no external one to catch on a belt, pocket, or jacket when presenting the revolver. They also like the grips safety figuring that if a bad guy got his hands on the handgun during a struggle, he would probably not realize that there was a grip safety to be depressed and it might save the officer's life.
The re-introduced model 40 is available in a more standard deep blue, the very beautiful nickel plated finish that I chose, or blue with a color case hardened frame. (S&W’s introduction of color case hardened revolvers in their classic line is somewhat strange since the revolvers were never produced with this finish treatment in their original runs. If memory serves me well, Smith also did this with their Heritage line several years ago.)
The 40 should be a very popular revolver, and judging by the difficulty I had in getting a hold of one I would say that it certainly is, due to its lack of the much despised internal lock which became standard on all S&W handguns in the early part of this century. With the external grip safety the hated internal lock is no longer needed.
Handling the Model 40
The grips on the 40 are rather flat and do not provide much to hang onto which impedes the gun’s inherent shootability as this affects both the comfort of shooting the revolver and the ability to shoot it accurately. Due to the design of the grip safety, most Smith & Wesson J frame replacement grips will not fit the model 40 and that it OK with me since the grips furnished with the revolver are very nicely done. The shootability was greatly improved by the addition of a Tyler T-Grip adapter which also keeps with the vintage appearance of the revolver as for many years the T-Grip was the most popular attachment to improve a revolver's grip.
Another problem with my model 40 was the trigger pull. I don’t know how heavy it was because my Lyman Digital trigger pull scale stops at 12 pounds and the model 40 produced error messages that the pull was over the limit. The heavy trigger was causing me to pull my shots and had a negative effect on accuracy. Again, there is a fix. While visiting a gun shop I met a retired S&W representative whose specialty is remedying trigger pull issues. For a very reasonable price he slicked up the action which in-turn tightened up the groups. The pull now measures a very nice 10.4 pounds and is very smooth.
The model 40 holsters up well in both a Galco pocket holster and a Blackhawk inside-the-waistband rig. 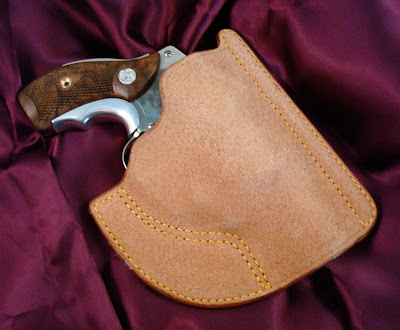 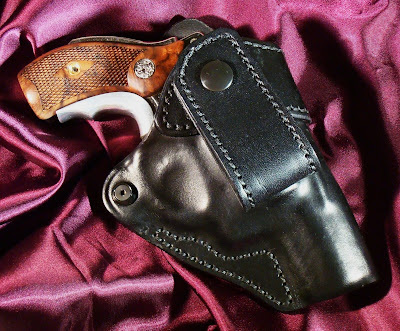 become more comfortable with the IWB holster carry and the Blackhawk is probably the way I will go.
Range Targets
The first four targets were fired with standard FMC range ammo; either 130 grain or 132 grain cartridges from Remington, Fiocchi, or PMC.
25 rounds fired at 21 feet: 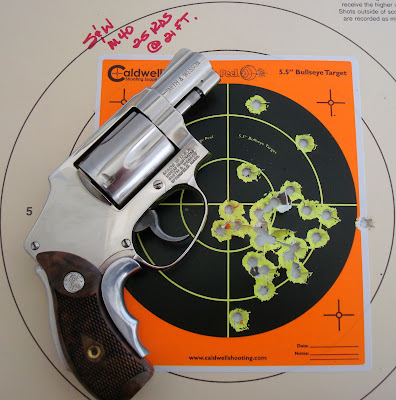 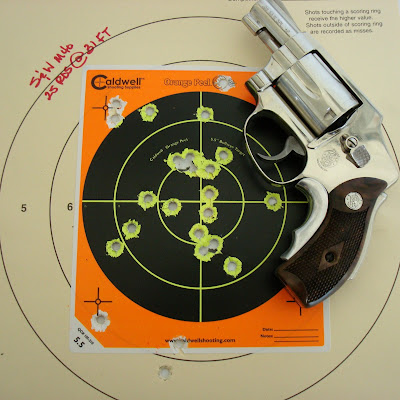 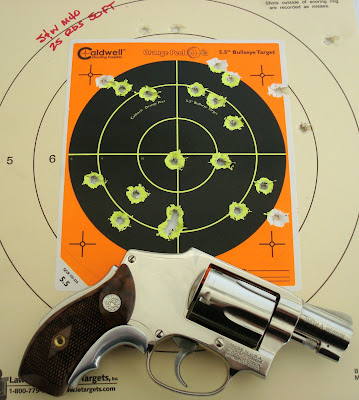 25 rounds fired at 75 feet-which for me is really pushing my limits: 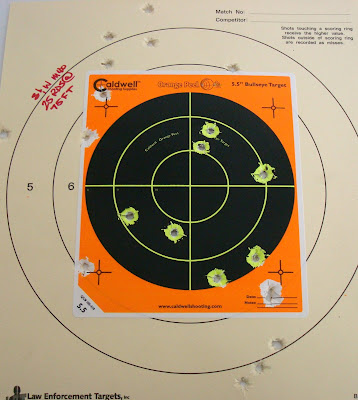 The next four targets were fired at with different defensive rounds; all at a range of 21 feet.
Buffalo Bore 158 grain +P LHP: 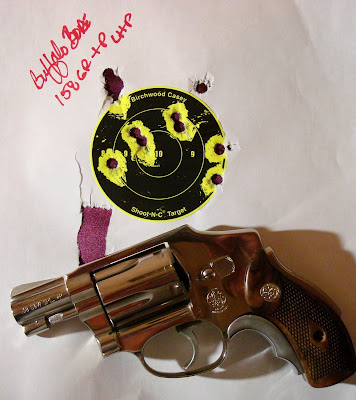 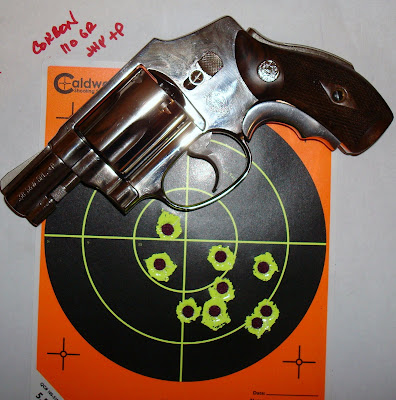 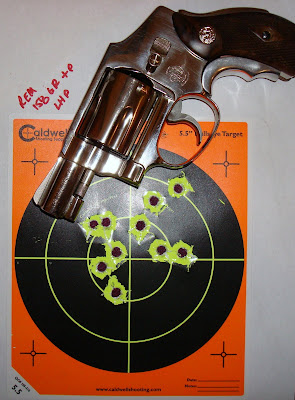 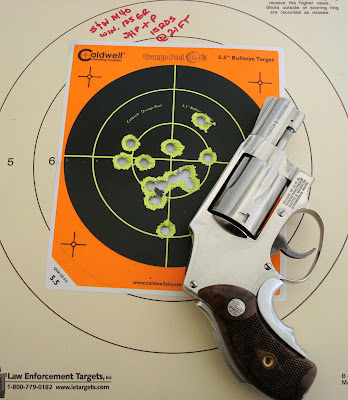 I really like this little revolver. It is handsome and with some aftermarket tweaking has become easy to shoot and accurate. It may just replace my favorite Model 340 M&P as my favorite “quick carry” piece.
Posted by Average Joe's Handgun Reviews at 11:31 PM