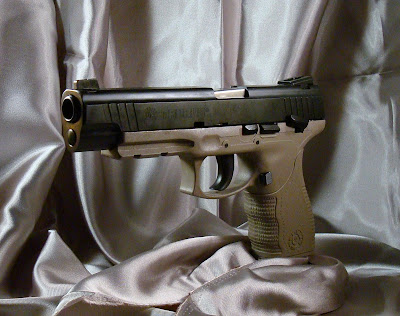 The OSS is a full sized handgun that Taurus produced as their entrant to the Army’s trials when they were looking to replace the Beretta 9mm. The Army wisely was taking another look at the .45 ACP but rather unwisely suspended the trial and ordered another load of Beretta 9mm pistols. Don’t get me wrong, the Beretta is a good pistol, but the 9mm hardball ammo that the Army is saddled with puts the Beretta at a disadvantage.

The OSS is a striker fired pistol with a steel slide (and barrel of course) resting atop a polymer frame (which is available in black or desert tan), a 5.25 inch barrel and boasts a capacity of 12 + 1 rounds of the time and battle tested .45 ACP ammunition. Although it is a service sized handgun it feels smaller than it is primarily due to its conservative width and grip circumference, balance, and fairly light weight of 31 ounces. In part one of this series which began with the SIG P220 Match I lamented that the SIG was only designed with an 8 round magazine despite the grip frame’s girth. The side to side width of the OSS is 1.15” compared to 1.28” on the P220. The front to back length of the grip is 2.06” on the OSS versus 2.16” on the P220. The SIG is measurably larger but the Taurus OSS gives you four more rounds.

Taurus designed a very unique firing system for the OSS. This new pistol can be operated in Single Action, Traditional Double Action (first pull is double action and subsequent shots are single action), and it has Second Strike capabilities.

It can be carried “Cocked and Locked” in single action mode (which is out of the norm for most striker fired pistols). As with most single action pistols, you merely rack the slide and engage the manual slide safety by pushing it up until it blocks the slide. The ambidextrous slide safety on the OSS is located in the familiar spot where John Browning put it on the 1911 pistol and fortunately it is “right sized” so it is useful, but not in the way. Unfortunately, many custom gunsmiths have tended to offer obnoxiously large ambidextrous slide safeties that inhibit my grip and could be in a position, when holstered, to be bumped into the “off” position rendering the pistol ready to fire. The single action trigger has a pull of about 6 pounds and gives a good positive release after ¾ of an inch of take-up. This is not the super-light trigger of many custom tuned 1911s but this set up is better for shooting situations. Sometimes, with the adrenalin rushing, there can be an involuntary movement in the fingers that would cause a negligent discharge if you were using a 1911 with a 2 or 3 pound trigger pull. With the ¾ inch of take-up and then hitting the 6 pound trigger pull your conscious self should realize that your finger has contracted and you could avoid the negligent firing.
After racking the slide and engaging the manual safety you can push the safety upward again which de-cocks the striker and makes the first shot a double action pull whereby the first trigger pull both cocks and released the striker to fire the pistol. Pushing the safety up to de-cock the striker the shooter then can decided whether to leave the safety on or remove it so that the pistol can be operated in the DA mode without having to remember to remove the safety. The double action trigger pull has a little take-up and then a smooth and consistent 8 to 9 pound roll through the positive release. This is one of the best double action pulls I have encountered on a striker fired pistol and I would not hesitate to carry this in the double action mode.
Unlike most pistols, the OSS allows the shooter a second strike on the primer if the shot fails to go off. In other words, if you pull the trigger and the pistol goes “click”, instead of “bang” you can pull the double action trigger again and the striker will automatically cock and be released into the firing pin striking the primer a second time. Quite frankly, in all the rounds I have sent down range I have rarely had a centerfire cartridge fail to go off (rimfire cartridges, yes; it happens more often when the powder is unevenly distributed around the rim). However, after reading Jim Cirrillo’s book (Cirrillo was a highly decorated NYPD officer who survived 17 shootings while on the stakeout squad) he mentioned that in his numerous gun fights he usually only heard his first round go off even though in most of those shootings he emptied his service revolver and many times emptied his back-up revolver as well. After he fired his first round his auditory system shut down until the shooting stopped. Therefore under a stress-shooting situation you might not hear that your pistol did not fire and the second strike may save your life. 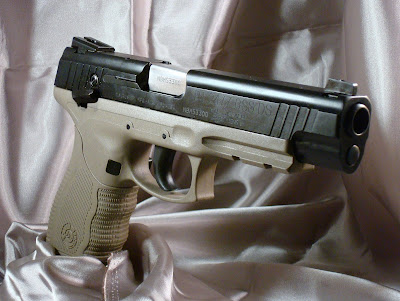 The OSS appears to be an amalgamation of some of the best combat pistols available today:
· The slide, full length guide rod and recoil spring has clearly been borrowed from Glock.
· The slide safety is from the timeless design that John Browning put on his 1911 pistols.
· The take-down is a Browning 1911 and SIG hybrid. You rotate the take-down lever downward, a la SIG, but pull it out of the slide just like a 1911.

The grips however are all Taurus. This company has designed some of the best rubber grips on the planet in order to tame the recoil of the mighty .357, .41, and .44 Magnum revolvers. This auto pistol’s grip is nicely checkered and contoured to provide a comfortable and positive hold on the pistol. The overall feel and balance makes the OSS a natural pointer and contributes to better accuracy.

My only complaint about the OSS is the sights. The design and execution is fine, but they are standard white 3-dot sights and, in my opinion, any modern fighting pistol should come standard with some type of night sight. The sights are adjustable for windage which has been totally unnecessary on my pistol.

In shooting I did experience quite a few failures to feed as I racked in the first round. I found that utilizing the sling-shot slide release technique rather than the employing the slide release fixed this problem.

Let’s See Some Targets:
All targets fired on with Fiocchi or Winchester 230 grain hardball, unless otherwise noted.
Three targets from 21 feet. 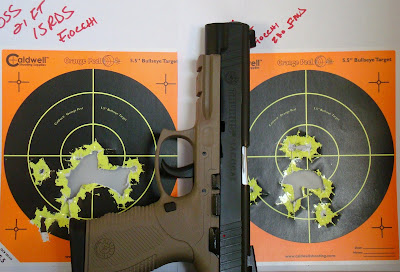 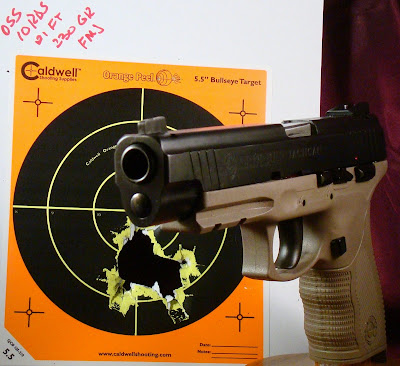 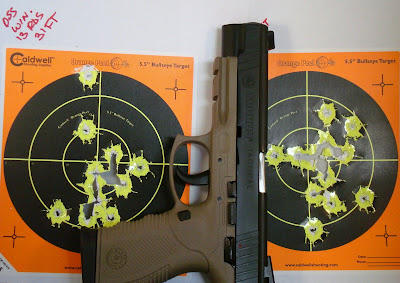 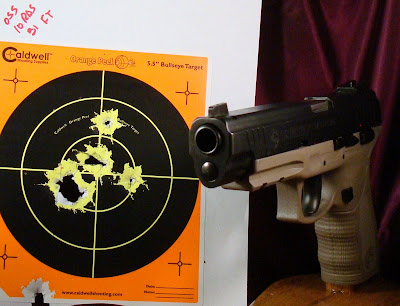 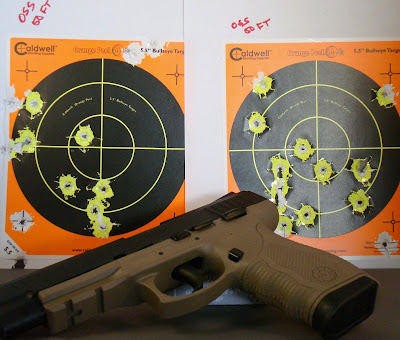 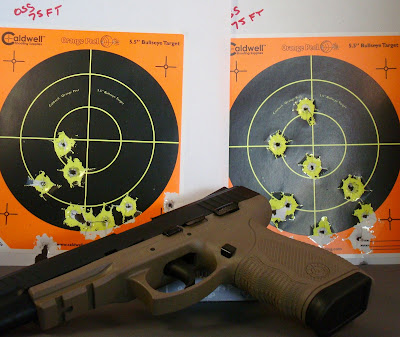 The next couple of targets were fired using a technique developed by the aforementioned Jim Cirillo. Cirillo found that as his eyes got older he had more difficulty focusing on the front sight. However, he found that if he learned what the rear of the slide looked like when the pistol was positioned to be properly sighted then he could use the rear slide profile to accurately fire his pistol. He referred to this as "slide indexing" and felt that it was a worthwhile for everyone to practice as there have been times during shooting when the rear or front sight might come loose and fall of the pistol. He had students practice this technique by placing black electrical tape over their rear sights. Here are two targets fired upon utilizine Cirillo's slide indexing technique at 21 feet. 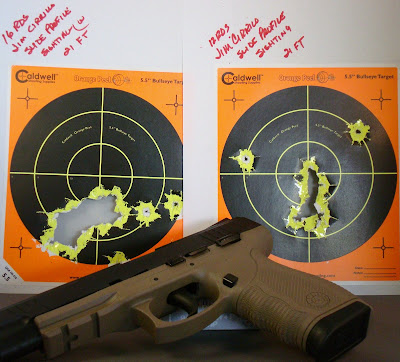 Over all, the Taurus is a fantastic pistol. It provides excellent target accuracy bordering on match quality. The Army would be well armed with the OSS and I hope the pistol trials are revived.
Posted by Average Joe's Handgun Reviews at 8:00 PM