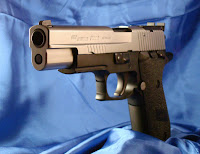 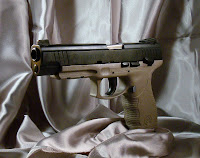 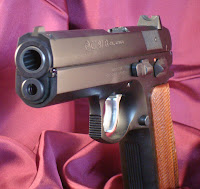 Part I – The SIG P220 Match SAO Model
Lately I have been focusing these blog reviews on concealed carry handguns. While this has been fun and certainly meaningful, it wasn’t always satisfying as I tried to get tight groups with small and sometimes very high powered handguns shooting hot ammo. Time for a change and nothing is more satisfying than shooting a big service-sized .45 ACP, one that was built large enough to get the most out of the cartridge, and watch those fat holes appear on the paper down range.
Now, while all of the pistols reviewed in this three part piece are a little too large for concealed carry, they are perfectly suited to the defense of your home. When night has fallen, the house is still and suddenly the dog jumps to alert from a sound sleep, there is no need to rely on the small pistol you carry concealed all day. Now is the time for night sights, a pistol large enough to get a solid grip on and chambered for the largest caliber you can shoot accurately. One that will drop the assailant dead in his tracks or has the capacity to hold off the multiple intruders until the police arrive. Additionally, if a natural disaster strikes, social order spirals out of local law enforcement’s control, and you’re on your own for a few days, then all bets are off and you can (and should) carry the largest caliber and capacity firearms in your battery. That 5 shot .38 special snub you normally carry can rest easy as a back-up gun when you strap on the Big-Boy .45 and sling your carbine or shotgun of choice over your shoulder.
On to the P220 Match 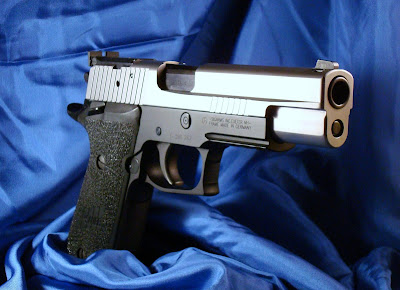 A couple of weeks ago my favorite Boise gun dealer, Cliff, called to tell me that he had sold the remaining firearms that I did not want to move out here to the land of 10,000 lakes. He asked if I wanted a check forwarded but I wanted to look over his offerings on GunsAmerica.com first. That’s where I saw the P220 Match; so for a very minimal cost after applying my credit, off she flew to my local FFL dealer. $35.00, some paperwork, and a call to the State Police to verify my upstanding reputation within the community and I was out the door with a new handgun.
Let’s start with the pistol’s specifications:
Caliber: .45ACP

The specs also state that this gun is not compliant with the regulations in Massachusetts and California so if you live in either of those former Soviet Satellites you have my sympathies.
In addition to adjustable sights, this pistol also has a night sight on the front sight which is a nice touch. This being a “Match” set-up SIG has taken their standard P220 and lengthened the slide to accommodate a full 5 inch barrel instead of the 4.4 inch barrel on the standard P220. It also has adjustable rear sights which I had to only turn 2 “clicks” to the right. Most SIGs come only equipped with fixed sights and are extremely accurate out of the box, but many shooters wouldn’t accept it as a target pistol without the adjustable sights even though I only had to move them over a gnat’s hair starboard. The P220 Match also has the option of coming in a single action only configuration which is the model I am reviewing here. This is quite a departure for SIG as they have made their mark as a traditional double action pistol maker. The pistol sports a slide safety mounted to the frame exactly where the 1911 trained shooter would expect this it to be. Thankfully the safety has been carefully designed to be small and unobtrusive while still being efficient in a shooting situation. The SAO only trigger pull is set at 5 pounds. It has a little take up and a crisp, determined break with the 5 pounds of pressure. I like the 5 pound trigger pull much better than the 3 pound pull I have found on many 1911 pistols. Three pounds is too light and could contribute to a negligent discharge, 5 pounds is heavy enough to maintain control over the trigger without being so heavy that you pull your shot off target. The pistol also comes with a tactical accessory rail in case you desire to hang a flashlight or laser sight on it. To me this, and the front night sight, signal SIG’s acknowledgement that people are going to use the P220 Match pistol for defensive purposes as well as competition shooting.
My only disappointment with the P220, and this goes for the entire 220 series, not just the Match model, is the capacity of eight rounds. With a width of 1.5 inches this is a fairly wide bodied handgun and the magazine well in the grip frame could easily be enlarged to accommodate a double stack magazine without enlarging the frame itself.
How does she shoot?
Well she' a SIG…utterly reliable and undoubtedly more accurate than my skills can squeezed out of her.
Eight rounds of hardball fired at 21 feet: 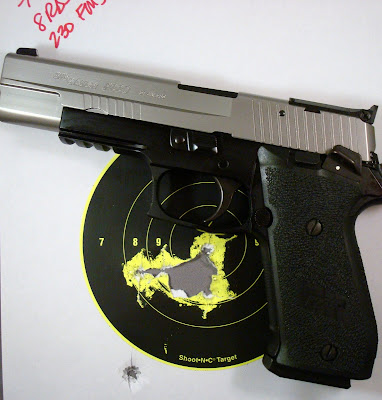 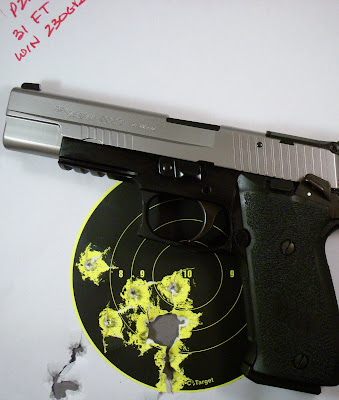 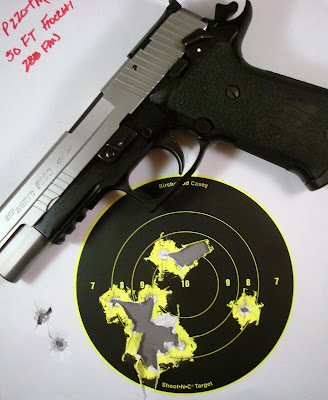