Smith & Wesson Model 360-1 or 360 Sc
(This photo copied from GunsAmerica.com, who probably coped it
from Smith & Wesson's website) 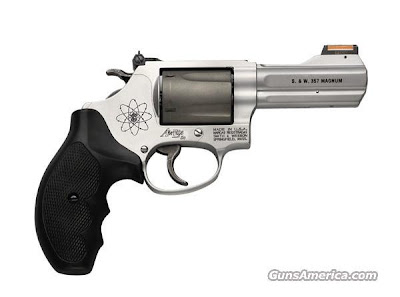 The S&W Model 360 Sc or 360-1 was one of the Springfield, MA firm’s first featherweight, scandium frame models. I purchased one in 2003 primarily because of the light weight and barrel length. I had always thought that the 3 inch barrel was better than the 1 7/8 inch model on most of Smith’s J frame revolvers. The slightly longer barrel should improve accuracy due to the longer sight radius, it should pump out a little more velocity, and provide a little more control over recoil. The 360-1 also brought the added bonuses of the scandium frame and adjustable rear sights with a Hi-Viz Tru Glo orange fiber optic sight up front. However many trips to the range caused me to rethink my purchase—I could not get this revolver to group well enough to take advantage of the adjustable sights. The trigger seemed stupidly heavy and I wanted it changed. The stock trigger tipped the scales at 13 pounds and may have gone higher as the gunsmith’s trigger pull scale stopped at 13 pounds. A set of Wolf springs brought the pull down to a more acceptable 7 pounds, however I still could not make it acceptably accurate.
I wound up making this a part of an eventual trade and was disappointed about this gun’s performance. Several years and thousands of rounds down range later I had become a better shooter and second guessed myself about the 360-1. Maybe the problem was that I had not been an experienced enough shooter to make the light weight revolver perform. By this time however, the 360-1 was no longer in production. The fact that I could not find a used one in any gun shop concerned me that I was wrong to let this one get away.
Well, now I have found a brand new one in the corner case of my new favorite local gun shop. Here are the specifications:
Caliber: .357 Magnum
Capacity: 5 Rounds
Barrel Length: 3-1/8"
Front Sight: "Light Gathering" HIVIZ® Orange Dot
Rear Sight: Adjustable
Grip: Rubber Uncle Mike's Combat
Trigger: Smooth Target
Frame: J Small Frame
Finish: Matte Stainless/ Grey
Overall length: 7-1/2"
Material: Scandium Alloy Frame, Barrel Shroud and Yoke, Titanium Cylinder, Stainless Steel Barrel Liner
Weight Empty: 14.4 ounces
On my first range outing I decided to fire some full factory .357 magnum ammo through it since I had such good luck with them in my scandium framed model 340s. I put on my shooting glove and pulled the trigger. It only took one round for me to remember another reason that I traded the 360 away. Shooting it was painful, more painful than shooting the scandium 340s. The culprit seemed to be the grips. The model 340 comes with Hogue Bantam rubber grips in its standard configuration and with Crimson Trace rubber grips in it M&P offering. These grips are wider and disperse the recoil in a more efficient manner. The model 360-1 came standard with Uncle Mike’s hard rubber grips which did not give much during recoil. Even worse is the fact that the grips are sort of oval so that they come to kind of a point in the front and rear. This allowed the grips to move in your hand during recoil. After 60 rounds of factory .357 Mags I removed the shooting glove and found that the grips took about 1.5” X 1” of skin off of my thumb between the knuckle and the joint connecting it to the hand. It was extremely painful and took almost a month to heal properly.
I tried Pachmayr decelerator grips. It was still somewhat painful and the size of the decelerators made the handgun less concealable. I then tried full-sized Hogue rubber Monogrips. They helped the recoil and were a compromise between the size of the Pachmayr decelerators and the original Uncle Mike’s. But the revolver was not meeting the purpose for which I bought it:
1. The longer 3 inch barrel on the 360Sc should mean better accuracy compared against the 1 7/8th inch barrel on the model 340. It didn’t.
2. The longer 3 inch barrel on the 360Sc should help control the recoil of factory .357 Magnum ammunition when compared against the 1 7/8th inch barrel of the model 340. It didn’t.
3. The adjustable sights should help you dial the groups into center. Well it might if the revolver grouped well, but it didn’t with .357 Mag ammo. It did group OK with Standard 158 grain .38 Special Lead Round Nose ammunition, but I wanted it to shoot .357 Magnums.
So, having a revolver that was more difficult to conceal then the Model 340, not as accurate with magnum ammo, and was much more painful to shoot made this 360Sc, just like its predecessor, fodder for an upcoming trade and I am sticking with the Model 340 M&P.
At the Range 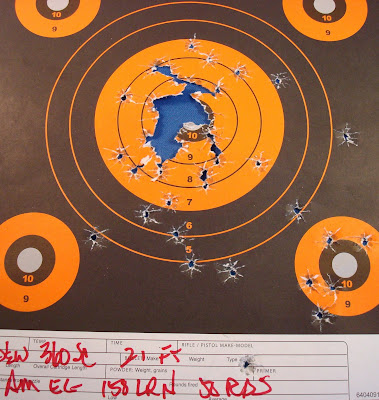 This target was placed at 21 feet and fired on with 50 rounds of American Eagle 158 grain Lead Round Nose .38 Special ammunition. The accuracy is acceptable however the lead round nose is the most inefficient defensive round available in .38 Special. 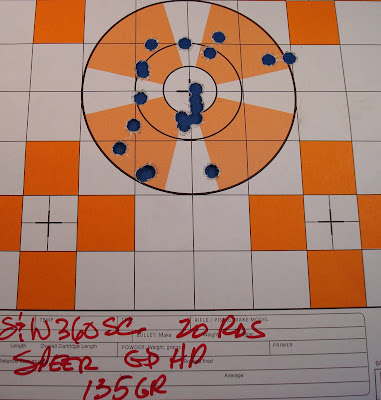 This target was hit with 20 rounds of Speer 135 Grain Gold Dot Hollow Point .38 +P ammo. This round was developed for short barreled revolvers and it is not too bad but the group is too erratic for me to consider as a defensive round. 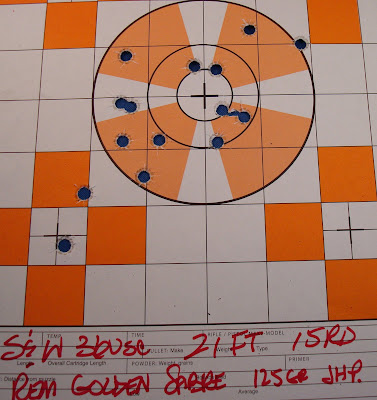 Now for the Magnums. This target was also placed at 21 feet and hit with 15 rounds of Remington Golder Sabre 125 grain jacket hollowpoint .357 m 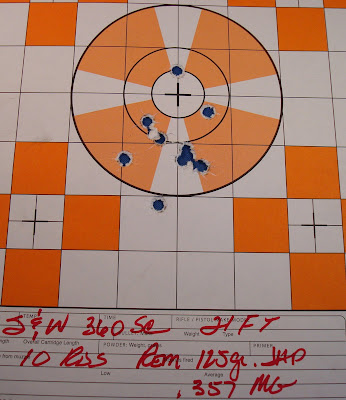 This grouping from the standard Remington .125 grain .357 Mag Jacketed Hollowpoint is a little better. 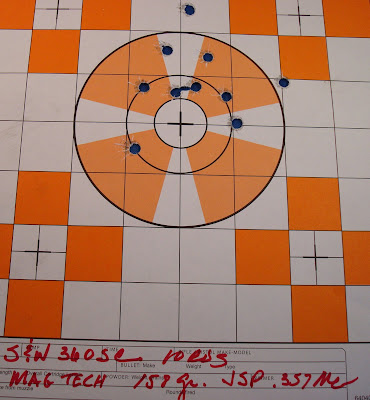 This grouping was provided by 10 rounds of Magtech 158 grain JHP ammo. It is essentially a hunting round and shot a little high. 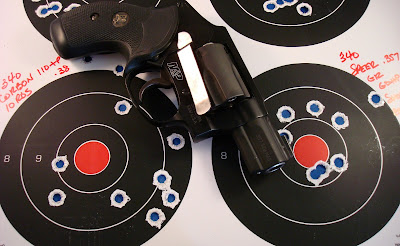 As the model 360Sc offerred no advantage I am sticking with the model 340 M&P stoked with Speer 135 grain .357 Magnum jacketed hollowpoint ammo. This is a new load specially developed to shoot accurately and expand reliably in short barrelled revolvers.