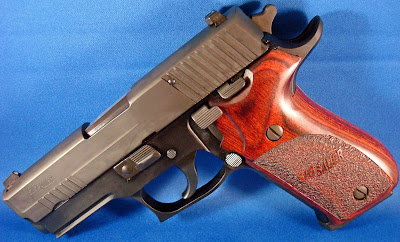 The firm of Schweizerische Industrie Gesellschaft, of Switzerland, was established in 1853 making railway cars. But as the years and the business evolved the SIG brand has come to stand for quality, reliability, and accurate firearms, most prominently handguns. During the 1970’s a merger of sorts took place with J.P. Sauer & Sohn which have allowed SIG to take advantage of Sauer’s manufacturing facilities in Germany.

SIG’s premier success came with the SP 47/8, later renamed and more commonly referred to as the P-210. This pistol was offered in a few different calibers but is revered as the one of the most accurate 9mm pistol ever made. The P-210 incorporated a design whereby the slide ran on rails inside the frame rather than the outside as is seen on most Browning designed semi-automatic pistols including the venerable Model 1911. It was thought that SIG’s design with interior rails provided better support for the slide, increasing both the strength and accuracy of the pistol. I don’t know if the prior statement has ever been scientifically proven but I will certainly not question either the strength or accuracy of their handguns.
In the 1960s SIG modified the design and produced the P220 which was offered in 7.65 Parabellum, 9mm, .38 Super, and .45 ACP. I first became aware of this design in 1978 when I received a phone call from a woman who ran a gun store out of her living room in Bloomington, Indiana where I was attending school. I realize as I write this that the practice of gun store owners calling me to tell me about something they have just received is no new phenomenon; it has been going on for 30 years. This woman knew that both myself and my apartment mate were fans of the .45 ACP; I had a Series 70 nickel plated Colt Government Model and Deane had a blued Colt Combat Commander. (I suppose I should accredit or blame Deane with my introduction to fine handguns in general, specifically the .45 ACP. When I first met Deane the year before he showed me his Colt Python .357 Magnum Revolver and his Combat Commander. These were premier handguns and I had never met someone who owned either, no less both. After firing the Colt Combat Commander I was hooked and there was no going back; the 45 caliber 1911 pistol was powerful, accurate, easy to shoot, and fun. My Smith & Wesson nickel plated Model 36 .38 Special just wasn’t going to cut it anymore. I should also accredit Deane with introducing me to Crown Royal. His father was an executive with Seagram’s so the fine amber liquor from Canada flowed freely.) Getting back to the story; the gun shop owner related that she had a new .45 caliber pistol and thought we should come in and see it. We rushed over and she presented us with a Browning BDA (Browning Double Action) service frame pistol in .45 ACP. The Browning BDA was only offered from 1977 to 1980 and although I am not sure of the connection, if the BDA was not made by SIG, it was certainly a line by line replica. Anyway, the pistol was imported, expensive, and double action…we scoffed. In our minds the Colt Model 1911 was a perfect design and there was no room for anything else, especially a double action for which we saw no practical use.
I will still contend that the 1911 is a classic and timeless design but I scoff no more at the SIG P220. The P220 has an enviable reputation for accuracy and this new iteration, the P220 Carry Elite continues to prove that the reputation is well deserved. The standard P220 is a full-sized service pistol. The Carry Elite trims the barrel slightly (half an inch) and adds a few very desirable upgrades to the standard package. The upgrades include beautifully stippled rosewood grips, night sights, and SIG’s relatively new Short Action Trigger. Below are the rest of the specifics on the P220 Carry Elite:

Shooting the P220
Cut to the chase; this is a great pistol. It is extremely comfortable and the recoil is nothing. I was firing this pistol along with a .40 S&W full-sized auto pistol and the felt recoil of the SIG .45 ACP was less than the .40 S&W. The grips are beautifully executed and the stippling on the rosewood allows for a firm and consistent hold shot after shot. The Short Reset Trigger is a wonderful development and I would urge everyone to find someone who has a SIG with the Short Reset Trigger and try it out. After firing the first round in the double action mode, the trigger resets itself in a very short distance (hence the name). This makes for faster and more accurate follow-up shots. The double action trigger pull is probably the best I have ever experienced. The pull is very smooth and while it is certainly longer than the single action trigger pull, the DA pull is consistent from the moment you put your finger on the trigger to the point where the hammer is released. This trigger does not have the annoying attribute of many DA pistols where the trigger has a fair amount of low-resistance take up before the trigger actually being to engage and cock the hammer. This abrupt change in trigger pull resistance is like hitting a brick wall and is responsible for many people throwing the first double-action shot off target. The DA pull on this pistol is so good that most of the DA shots hit dead center. 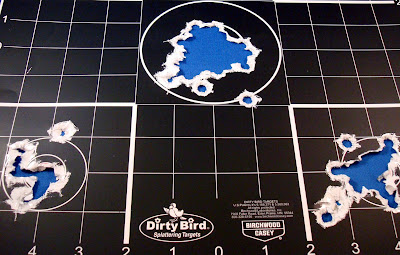 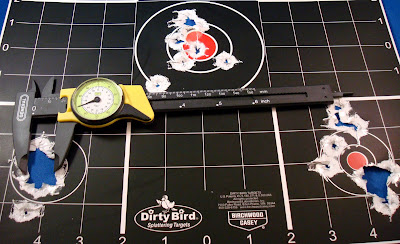 (Target fired on at 30 feet with Winchester 230 grain jacketed hollowpoint ammunition. 8 rounds were fired at each bullseye.) 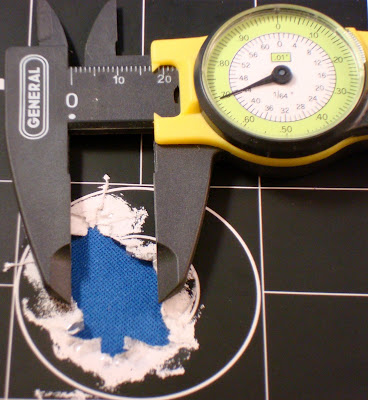 Seven of the eight rounds fired at this target went into a group measuring .69 of an inch side by side from 30 feet. Somebody who really knows how to shoot could really make this pistol sing. 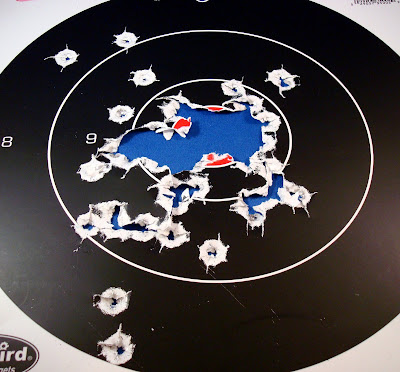 I am trying to work on my distance shooting so this target was placed at 50 feet (the limit of the Dakotah range) and fired on with 50 rounds of Remington 230 grain FMJ Ammunition. While I need to practice and perhaps get some instruction in longer range shooting, just over half of the shots landed in the ten ring.
There was one fly in the ointment. The pistol consistently fails to feed the last round in the magazine (with both mags supplied with the purchase of the pistol). I have an email in to SIG customer service and I will let you know what they say. I suppose from a practical standpoint that the accuracy of this pistol probably makes that 9th round rather moot, however I would like to have the pistol in a fully functional mode.
Posted by Average Joe's Handgun Reviews at 10:54 PM