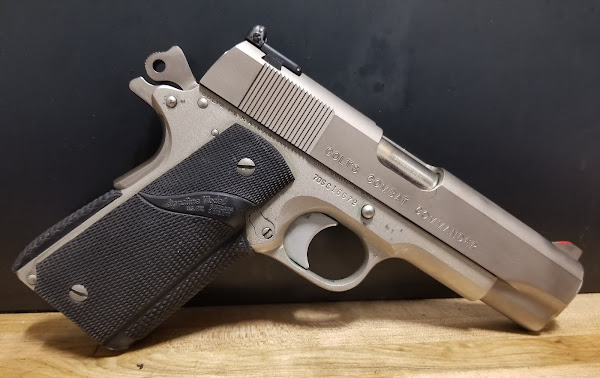 Mom! It followed me home, can I keep it?
Back at the birth of my shooting days, the pistol we now refer to as the "1911" was simply called the Colt Government Model, which was accepted into U.S. Military service on February 15, 1911.   This was a 5-inch barreled, single-action pistol that gained a serious reputation for taking the fight out of our enemies during two World Wars. Today, the term "1911" refers to the same style of pistol now made by a plethora of different manufacturers around the globe, but in my day, they were called the Colt Government model and they were only made by Colt.
In 1949 the U.S. Government wanted a new General Officer's pistol to replace the .32/.380 ACP caliber Colt Model 1903/1908 pistols that had been issued to Generals during WWII. The Government specified that the replacement be a 9mm pistol with a light-weight aluminum alloy frame and a barrel length of 4.25 inches.  Colt cut off three-quarters of an inch off of the Government model, re-chambered it for the 9mm cartridge and fit it with the aluminum frame. They dubbed this new offering the "Commander".   Browning submitted their superb Model 1935 Hi-Power and Smith & Wesson provided their new 9mm Model 39.  The program to provide a new General Officer's pistol went nowhere and the Army continued issuing the Model 1903 and 1908 up through the Vietnam War.
In 1950 Colt decided to introduce the Commander to the public, chambering it in .9mm, .45 ACP and .38 Super. While sales were good, the most popular version were the ones in .45 ACP (it would take about another 30 years or so for the shooters in the U.S. to embrace the 9mm cartridge) but shooting the .45 in an aluminum frame was not nearly as pleasant as shooting the longer and heavier all steel framed Government Model. There were also reports that the heavier and more powerful .45 ammo caused the aluminum frames to wear out quicker. Colt fixed this in 1970 by bringing out the "Combat Commander" which replaced the aluminum frame with good old American steel. To eliminate confusion, Colt subsequently renamed the aluminum framed version the "Lightweight Commander".
This takes us to the current time when the Combat Commander, pictured above, wandered in our Gun Club, looking for a new home. The finish on the pistol had seen better days but all day long some force of nature kept pulling me over to the case and I inspected and re-inspected the pistol. One of the interesting things I noted was that the sights had been upgraded a long time ago. Checking the Colt serial number database I found out that the pistol was manufactured in 1972, just two years after Colt introduced the model. In its original format it should have sported fixed, rudimentary GI style sights.
Stock Colt Combat Commander 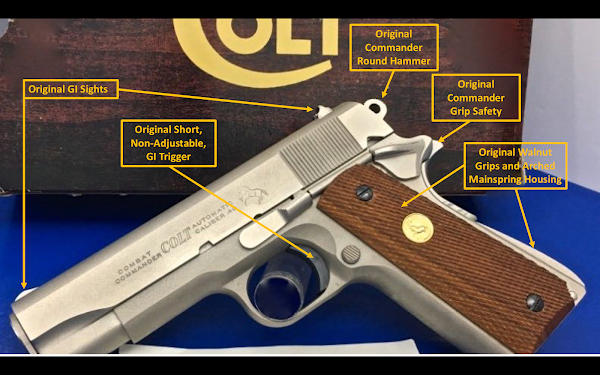 The model that had just come into the Club sported a vintage target front sight with a red polymer insert and a fully adjustable rear sight.  It appears that the rear device might be a Heini precision sight.  The original GI front sight was not dovetailed into the slide, so whoever did this work had to mill down the top portion of the slide to accommodate the new target sight.  The original rear sight was dovetailed in but it had to be enlarged for the precision-adjustable sight.  A lot of work was performed to get these sights in place and get them in place correctly. 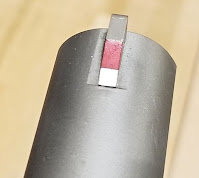 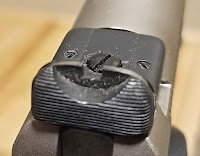 Further inspection found that, instead of the short GI trigger, this model had a longer, adjustable trigger that allows the shooter to fine tune the weight of the trigger's pull.  The pull of this pistol measured an average of 3 pounds, which is excellent. 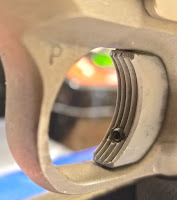 The pistol also has an aftermarket hammer, Pachmayr grips/Pachmayr arched mainspring housing and an aftermarket grip safety/beavertail combination that helps protect the web of the shooter's hand from being "bitten" by the hammer. 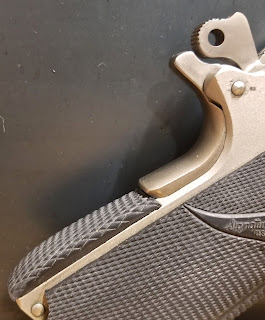 I bought a brand-new Government Model in 1977 and it had something that this pistol does not have...the standard Colt shake.  My 1977 Government model rattled when shaken.  This 1972 Combat Commander has had some top notch gunsmithing work to tighten up the barrel, bushing, slide and frame fit.
The amazing thing I want to point out here is that this type of custom work was not at all very prevalent in the 1970's.  Rarely did I even read magazine articles about customizing the 1911 pistol and most of the advertising for custom gunsmiths was centered around the S&W K frame.  For those that found a good custom 1911 maker, and there weren't many outside of Armand Swenson, the price for these enhancements was not within the reach of the average shooter during this time period.
After all of my inspecting and reinspecting of the pistol I decided that if I had a holster to fit it, I would consider that divine intervention was commanding me to buy this pistol, and who am I to go against God's will.
I immediately went to the trunk of my car and retrieved my Bag 'O Holsters to see what I could find and I did, in fact, have a Commander size holster. 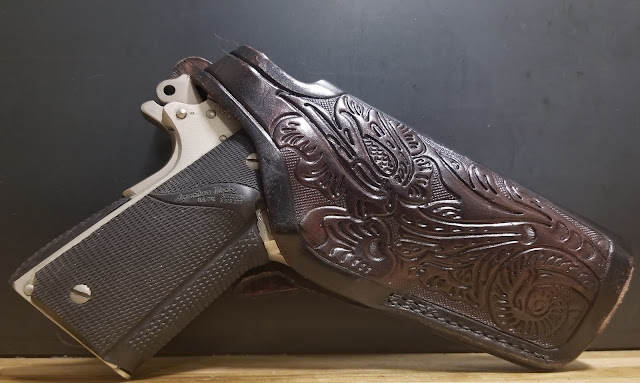 I absolutely love this holster but after a half a day of wearing it I remembered why it was at the bottom of the spare holster bag.  The cut of the leather on the reverse side does not allow me to get a complete and firm grip when drawing from the holster and the safety snap has a particular way of maneuvering the safety into the "off " position.  A quick check of the internet and I located my favorite all-round holster, the DeSantis Speed Scabbard. 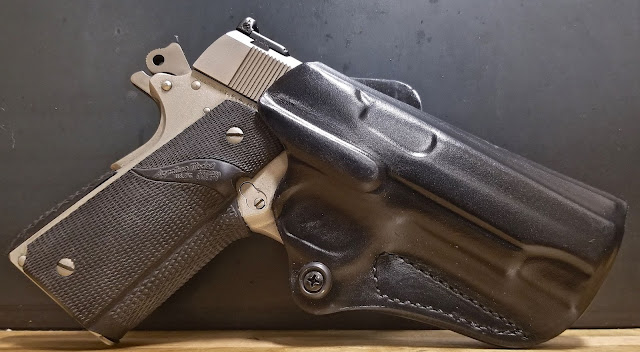 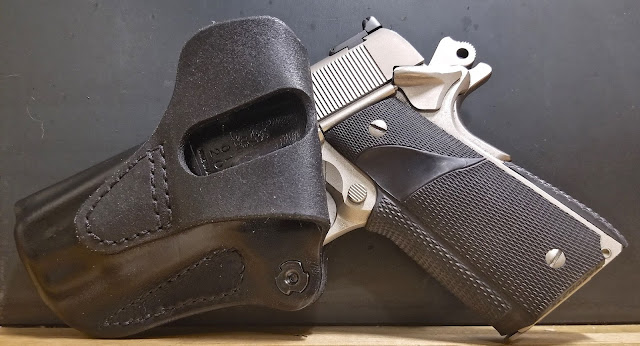 The DeSantis Speed Scabbard allows quick access to your pistol and has a tension screw so that you can easily adjust how tight the holster grasps the pistol.  The one-piece tunnel loop on the reverse of the holster also makes it easy to put it on and easy to remove later.
Does it Shoot?
The target below was the first 25 rounds fired at 21 feet. 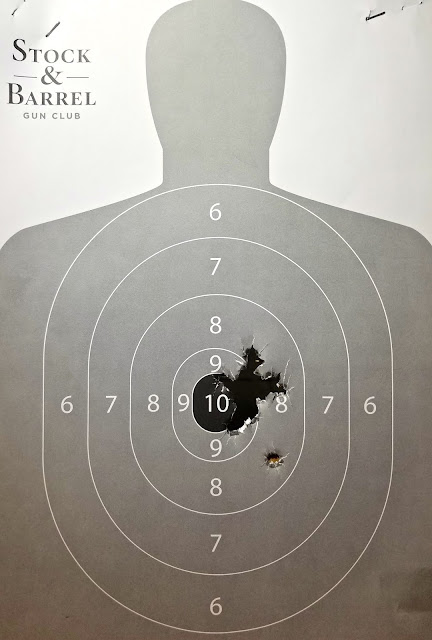 It grouped very well but was above and to the right of center which was an absolute change from my normal low and left grouping with a 1911 pistol.
Fine-tuning the rear sight brought me this group: 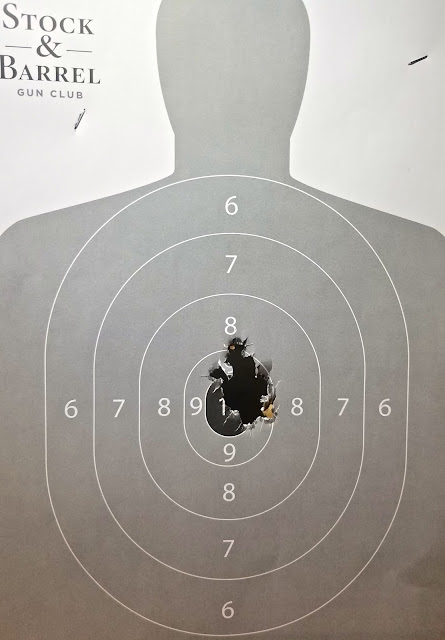 And another session with the screwdriver lowered the group a little more: 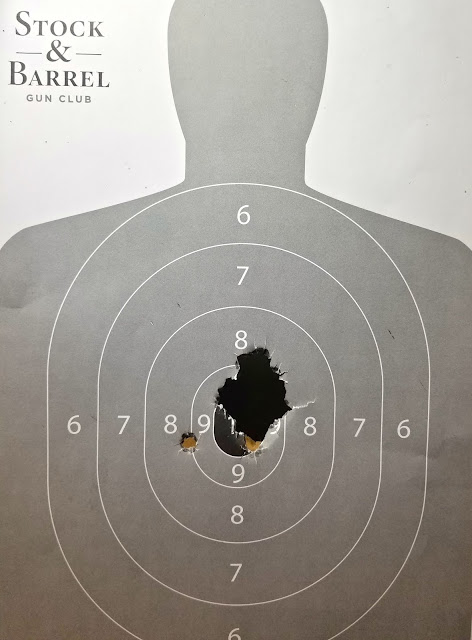 There are several attributes about this pistol that make it accurate and a joy to shoot:
All of these enhancements, again pretty rare in its day, work together in giving the shooter much more accuracy and enjoyment that one would expect in a 49 year old vintage Colt! 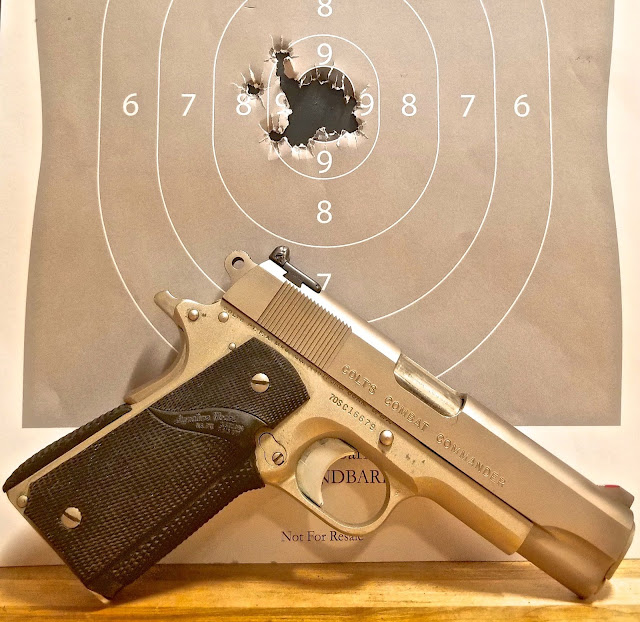 I have had a lot of fun with the Combat Commander and I really had no idea that this level of skilled gunsmithing was available in the 1970's.  In the mid-1990's Kimber rocked the handgunning world by producing pistols that incorporated the upgrades that have, since then, become standard for 1911 pistols.  Colt, for whatever reason, failed to keep pace with the market and Kimber, Springfield and others stole the 1911 market from them.  That is a shame since this pistol readily shows off the potential hiding in Colt's old War Horse.
Posted by Average Joe's Handgun Reviews at 5:26 PM