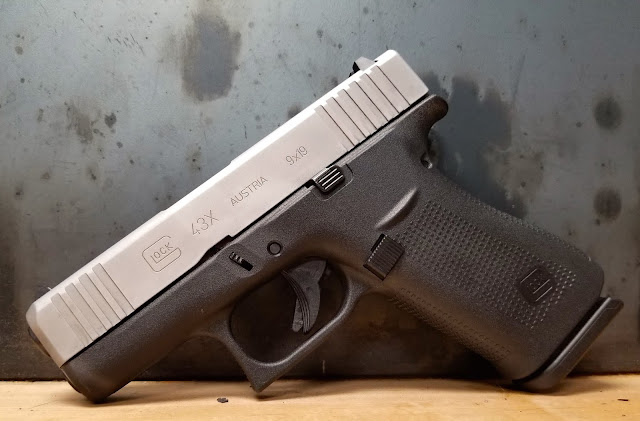 One of the gun industry's big January announcements was Glock's additions to their line-up of single stack pistols. This year's introductions include the Model 48, a single stack version of their venerable Model 19, and the 43X, which is basically the slide of the Model 43 mated to the 10 round grip frame of the (G19 sized) model 48.  One of the most obvious features of both new offerings is the matte stainless PVD coated slide.  PVD is a very tough coating used on everything from watch parts to heavy machinery.  I'm not sure why they used the PVD coating rather than using a stainless steel slide, but I'm sure Glock has its reasons.

Clearly the model 43X was engineered to combat the SIG Sauer P365 which has substantially eaten into the standard Glock 43's market share.  SIG's little micro pistol took the gun buying public by storm in 2018 with it's diminutive size and 10 round capacity. Let's see how the 43, 43X and SIG P365 stack up:

The SIG P365 is clearly smaller in all but one dimension and boasted a 10 round capacity that made it the concealed carry darling of 2018.  However, for some shooters, it (as well as the standard 43) was just too small.  The grip height could be improved by the use of SIG's 12 round, extended magazine but the width and overall length was still too small for some customers.  The 43X solves this issue.

The height of the 43X is taller than the standard 43 largely due to the longer grip that angles diagonally backward.  The grip is also just a tad bit wider than the standard 43 and I tend to prefer the feel of the 43X's grip over that of the 43 or the SIG P365.  The extra length is probably the reason that I shoot the 43X better than the other two pistols and the increased grip height is not going to make it decidedly more difficult to conceal.  The taller, angled grip frame is also the reason that 43X magazines will not fit into the original Glock 43. 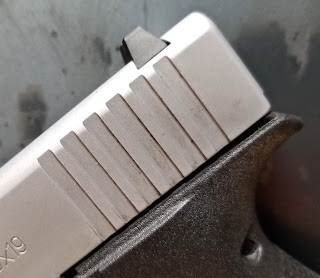 The 43X also includes the wider cocking serrations (both front and rear) of Glock's Generation 5 models and I like this feature over the slimmer serrations of the standard 43. 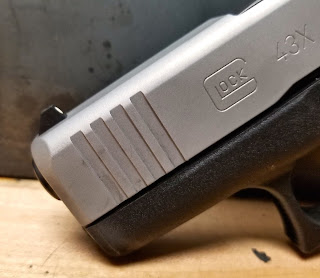 Glock is currently producing the 43X (and the 48) with three different options in terms of sights.  The first option is the original Glock painted-on white dot front sight with the rear outlined sight that you will want to replace as soon as you can.  The second option is Glock's own night sight combination and the third option is the Ameriglo night sight with the blaze orange dot on the front.  Obviously there is an incremental price increase if you select one of the night sight options instead of the original Glock sights.

The biggest surprise is the trigger pull. The pull seems to be a step up from Glock's usual gritty and heavier-than-necessary pull.  Let's hope more of the same will be coming from Glock.

The 43X shoots better for me than most other Glock at the abbreviated range for which the 43X is most likely to be used.  The brain was shot at 5 yards, the head was shot at 7 yards and the torso was set out to 10 yards. 20 rounds was fired at each of these distances.  My experience with the accuracy of Glock pistols puts their performance below those from SIG and Walther.  The accuracy was better than I had expected but still not up to the level of German designed handguns. 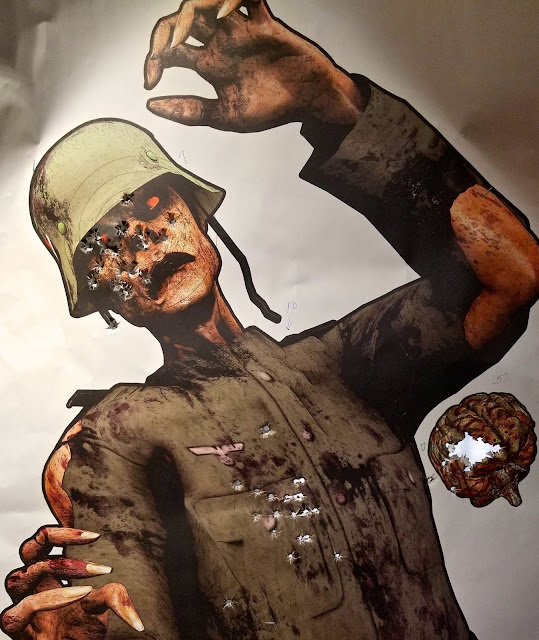 At 20 yards I fired 40 rounds with 3 missing the target, 19 rounds penetrating center mass and the remainder hitting the other areas of the target. 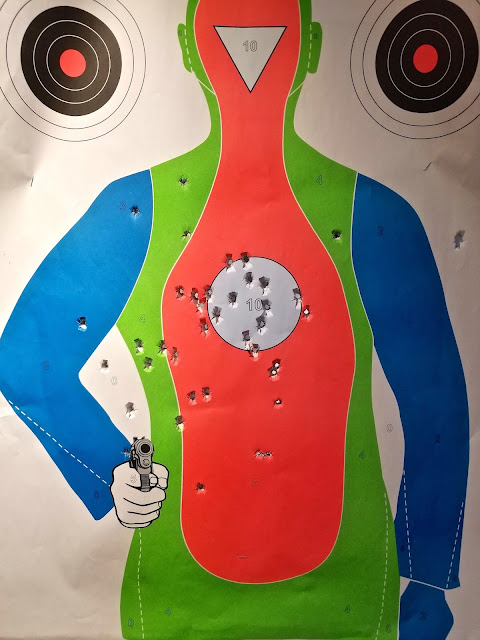 I have a hot and cold relationship concerning Glock pistols and currently, just like our January weather, it has been pretty chilly.  This pistols shows some steps in the right direction and let's hope that Glock has turned the page to become competitive with other makers.