At the beginning of 2018 manufacturers introduced many new models and created quite a stir of excitement within the shooting community.  One such introduction was the Ruger PC carbine in 9mm.  Pistol caliber carbines have a lot to offer in defense of hearth and home.  Please allow me to rattle off the advantages of the PC9:

1. Low cost of ammunition.  It runs the 9mm which has the lowest price of any centerfire ammunition.

2. Easier to shoot than a handgun.  Carbines (which are just shorter rifles) are easier to steady being anchored into your shoulder and supported by both hands.

3. They have less recoil than a standard rifle caliber.

4. Being shortened rifles, they are easier to maneuver and weigh less.  The Ruger PC measures 34.37 inches in total length and weighs 6.8 pounds.

5. They offer a higher magazine capacity than most rifles.

6. They use the same magazines as your pistol; in this case your Glock or your Ruger American.

7. Their longer barrels provide increased performance over a handgun.

And lastly, the Ruger PC does not look like the AR or AK platform that strikes fear into the hearts of so many in the anti-gun crowd.

Let's take a closer look at the bullet performance of the carbine versus the handgun. The Federal 124 grain Hydra-Shok hollow point bullet moves at 1,061 feet per second out of a 4 inch barreled handgun and provides 300 foot pounds of energy (which is the amount of energy required to move 300 pounds one foot).  Out of the 16 inches Ruger PC barrel the same round travels at 1,243 feet per second and delivers 420 foot pounds of energy. 1,243 feet per second will certainly provide enough velocity to allow the hollow point bullet to expand and release all of it's energy into the mass of the attacker.

The Ruger PC barrel is also fluted to help reduce weight and threaded in the event that you want to add a suppressor.

One of the interesting features of the PC is that it has an adjustable length of pull going from 12.62 inches to 14.12 inches.  This is accomplished by three half inches spacers that can be placed between the soft rubber butt pad and the stock.  This helps adjust the length of the stock, and thus the length of pull, to the individual shooter.

The PC has an adjustable ghost ring aperture rear sight that sits just forward of the receiver. 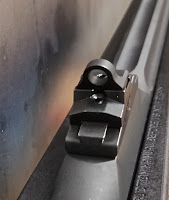 The front sight is protected by two blades sprouting up on each side of the sight post. 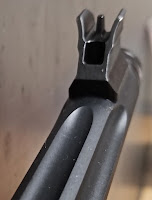 Amazingly to me, my old eyes were able to pick up a sharp sight picture using this arrangement.  I could, however, use some sort of a contrasting color on the front sight when shooting a black target.

The stock is a black colored, glass filled nylon synthetic composite that is rugged and features a nice stippling on all of the parts with which your hands will come in contact. 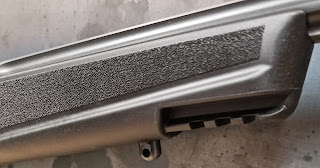 The font of the fore stock also features an accessory rail for any light or laser attachments you may which to apply.  Swivel sling mounts are also featured on the fore and butt stock. 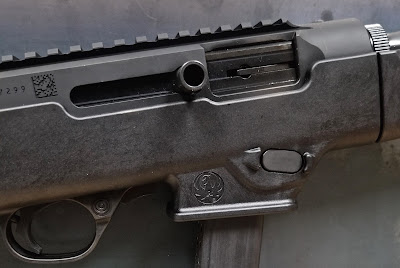 The top of the receiver also features a rail so that you can add the optic of your choice.  While the sights worked fine for me I tend to think that the addition of a red dot might help me dial in my groups a little bit tighter.

In the above image you will also note the knurled ring just forward of the receiver and the slight space between the receiver stock and the fore end.  This carbine breaks down into two pieces in the same manner as the Ruger 10/22 rimfire rifles and carbines.  This makes storage and portability even easier.  As of this writing Ruger is not providing a nylon backpack for the PC carbine but I can't help but think that it is only a matter of time before they are available. 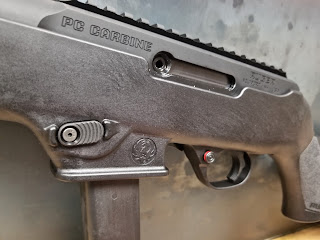 The bolt knob and magazine release are also switchable making the PC an ambidextrous platform.

The Ruger PC is extremely shootable.  It is great fun and the ability for it to accept Glock magazines is certainly a plus.  I give kudos to Ruger for realizing that Glock magazines are plentiful in the marketplace and that shooters would desire to use them.

Let's see how it shot! 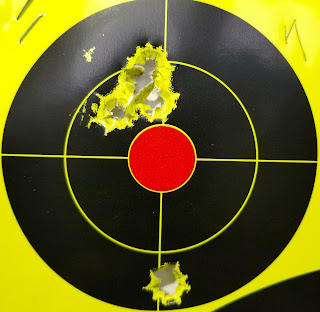 Starting out at a scant 7 yards the PC rewarded me with a nice 4 round group once I got the beginning flyer out of my system. 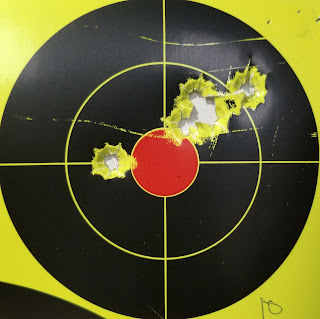 At 10 yards I still shot the carbine very well. 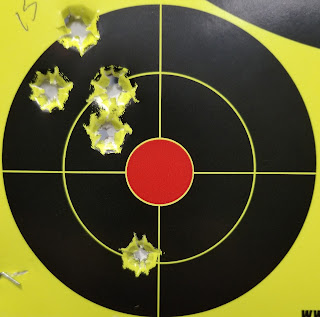 At 15 yards my group began to open up but, let's remember that this is a 3 inch bullseye target. 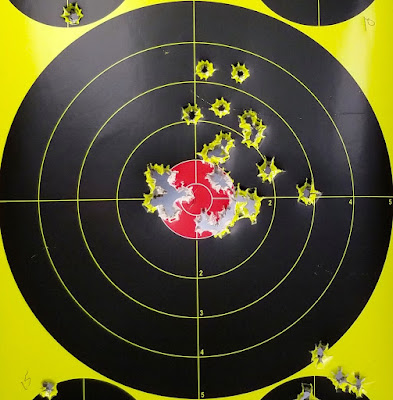 At 25 yards my shooting began to get inconsistent.  I attribute the shots in the red to be just as much luck as they are skill.  This is where and optic on top of the carbine would pay great dividends.

Overall I like this carbine a lot.  Now, to be frank, a pistol caliber carbine will never take the place of a rifle caliber weapon in it's ability to take game or defend against attackers.  However, it offers a great advantage over a handgun in the same chambering.

Currently I have one PC carbine in our rental portion of the shop.  I am sure that more will be released soon but right now they a little hard to come by.

Here's one last look at the nicely engineered lines of the new Ruger PC carbine.