The Guns of Disneyland 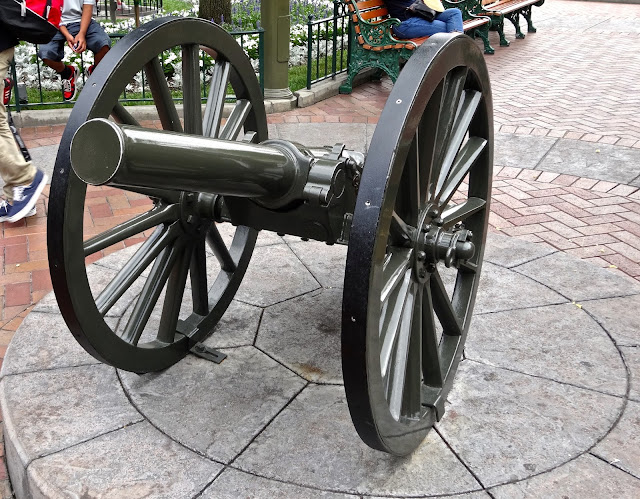 There are those in the left-wing progressive camp that would love to extinguish firearms from our culture and expunge any mention of them from our historical records despite the fact that without them this country would not exist.  Yes, firearms have been used by both the good guys and the bad guys but if they were taken away the bad guys would commit mayhem with something else.  Julius Caesar and the legions of Rome conquered most of the known world with spears and short swords.

People have always needed weapons for the self protection of their tribe, state, nation or themselves and history has shown us that the most tyrannical regimes on earth have always been able to exploit a population that is unarmed.    Spears and short swords were state of the art weapons technology in Caesar's time and today firearms represent the current evolution of weaponry.  Weapons, in one form or another, have been used by the members of ancient tribes, nations and individual citizens since the dawning of the human race.

The left-wing progressives prefer to move toward their stilted version of an enlightened society where there are no firearms nor any mention of them in historical studies.  Their efforts have resulted in misguided gun control legislation that has no effect of violent crime.  Their impact has also been strongly felt in the toy industry.  Trying to find a toy firearm in a lot of retail chains across the county is akin to finding the preverbal needle in a haystack.  Toy manufacturers have faced terrible pressure to cease or at least greatly decrease their manufacture.  My generation grew up reenacting the old west frontier with duels at high noon in the driveway or playing Army and pretending to oust the Nazi's from our backyards.  And we did this with plastic armaments from Mattel.  They gave us authentic Winchesters and Colt Peacemakers for the kiddie cowboys and realistic Thompson submachine guns and M16 rifles for those of us who chose to pretend that they were in 20th century conflict.  As far as I can tell our generation, who played with these realistic toys, turned out very few mass murders compared to recent times.  And as far as I can recollect no mass murderer has ever been a member of the National Rifle Association.  I haven't fully researched that last statement but I am sure if one had been the news media would have blasted that information across the stratosphere to the point where I could not have missed it.

So, if you want to visit a place which still remembers that guns were used in our history's past and still sells toy guns then maybe you should visit the happiest place on earth: Disneyland!  Disneyland has a plethora of firearms that are used on attractions as well as replica toy firearms for sale to the general public.

Upon first arriving at Disneyland and entering Main Street you will see a cannon situated in the town square.  Main Street is designed to capture the essence of small town America as the 19th century morphed into the 20th century.  It was very common in those days for the town square to have a cannon to memorialize the town's members who fought and possibly died in battle.  In fact, in the Broadway musical "The Music Man" as the Wells Fargo wagon approaches River City, Iowa the townsfolk gather in their town square and sing about what they think or hope might be on the wagon.  The members of the school board who have been transformed into a barbershop quartet harmonize that "The D.A.R has sent a cannon for the Court House Square".

When Disneyland was first built their imagineers fanned out across the globe to find artifacts that were needed like an old wooden carousel, vintage vehicles and a cannon.  This one was found in France and brought over to Disneyland. 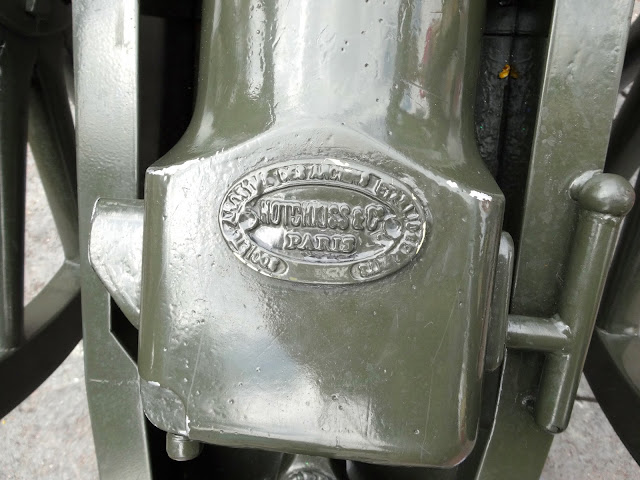 If you head up Main Street and take a left at the hub you will be headed into Adventureland.  After passing the Tiki Room the first attraction you will come to is the Jungle Cruise.  Onboard the boat the skipper keeps a revolver nearby. 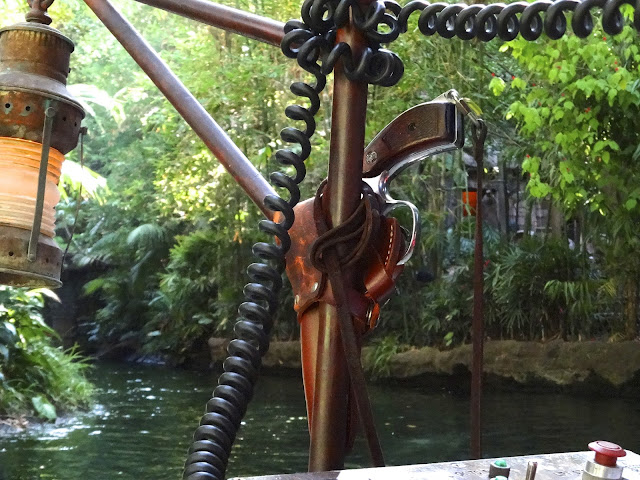 The skipper uses the revolver to scare away a hippo that seems bent on attacking the boat.  This is an actual nickel-plated Smith & Wesson revolver with a plugged barrel.  The lanyard was added about 20 years after the ride debuted because a couple of them were stolen from the boats.  The attachment of the lanyard is pretty ingenious.  The revolvers have square butts on them and whoever attached the lanyard put round butt grips on the revolver and then drilled out a hole at the bottom of the now exposed portion of the grip frame.

After leaving the Jungle Cruise you head further away from Main Street and find yourself in New Orleans Square.  There you will find the Pirates of the Caribbean attraction.  Inside you will find that many buckles get swashed and there is a fair amount of cannon fire as Captain Barbosa directs the the fire from the Black Pearl 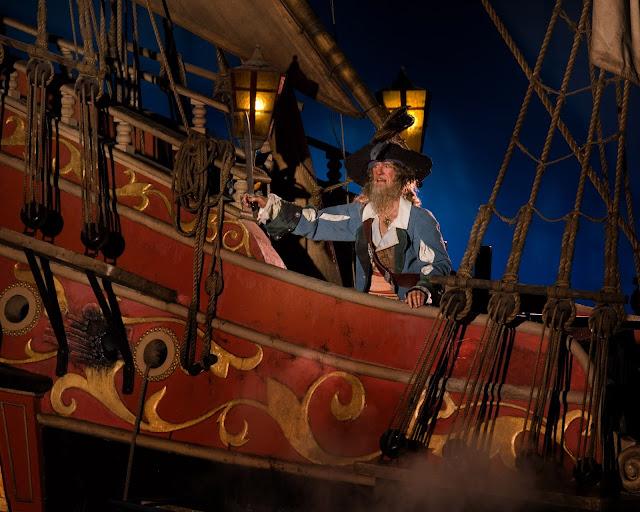 and drunken pirates take potshots at each other in the coastal town they are raiding: 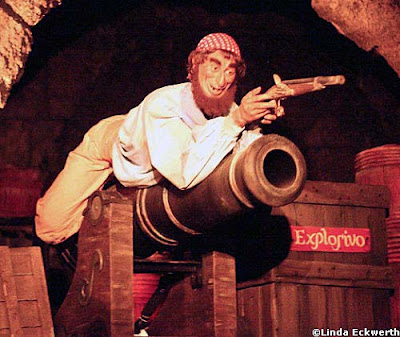 As with all Disney attractions you exit them through a gift shop and the Pirates of the Caribbean shop contained a veritable battery of arms to equip your pirate crew. 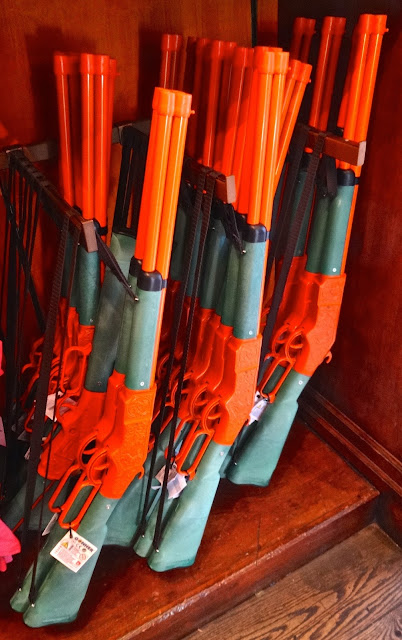 There were stores of Winchester repeating rifles because didn't all pirates use the gun that won the west?  There were also plenty of pistols in the battery as well. 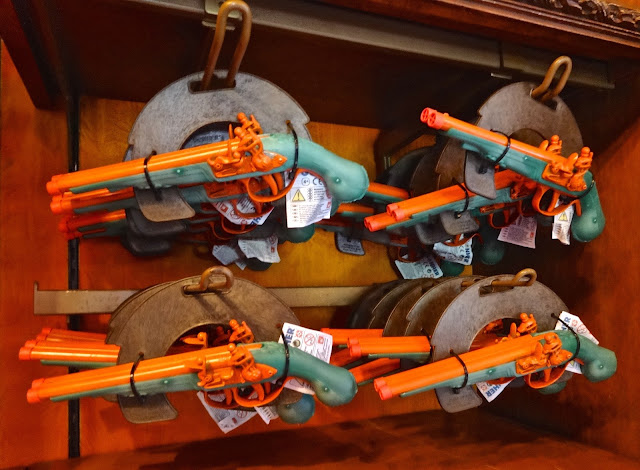 There were small caliber double-barreled/doubled-hammered flintlock pistols as well as a brace of larger caliber single barreled flintlocks. 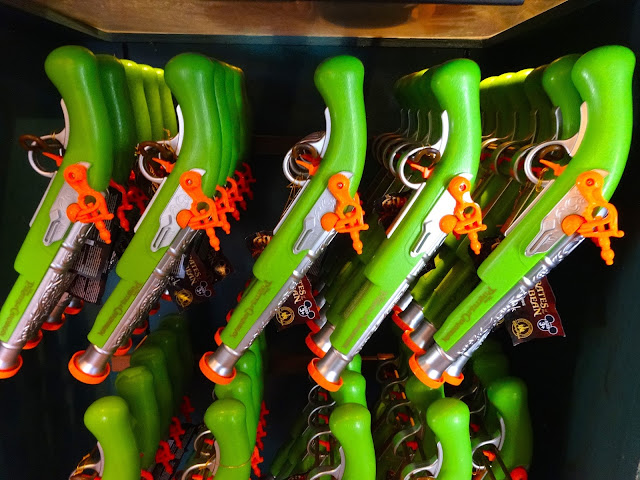 As you leave the gift shop and head toward the Rivers of America you might spy the mighty sailing ship Columbia. 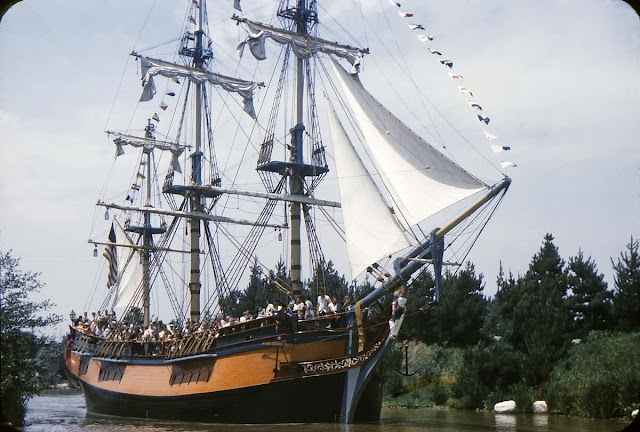 As of yet, no one has pressured Disney to remove the  cannons 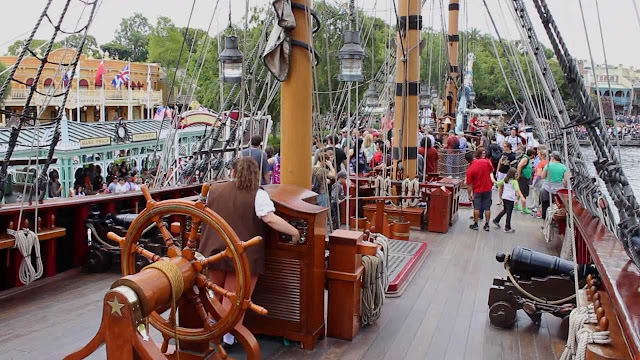 which is a pretty good thing as occasionally at night Captain Hook takes charge of the Columbia and does battle with Peter Pan. 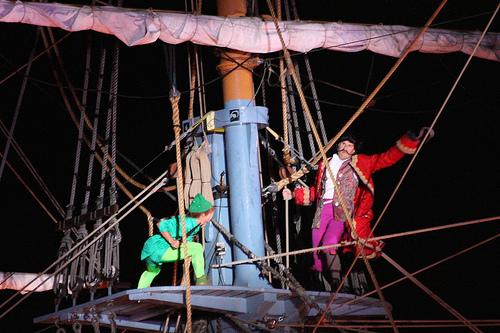 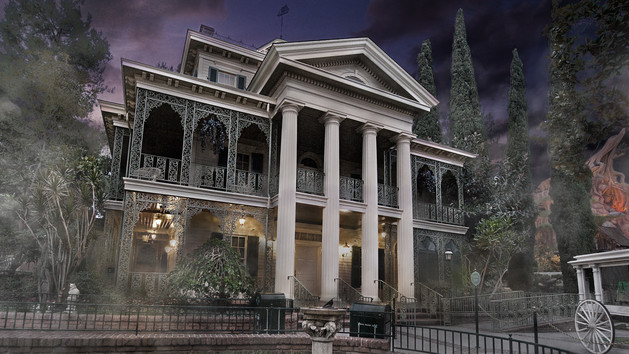 And even in this stately abode you will find portraits of two men, the ghosts of whom appear in the painting and show us that the two men died in a duel. 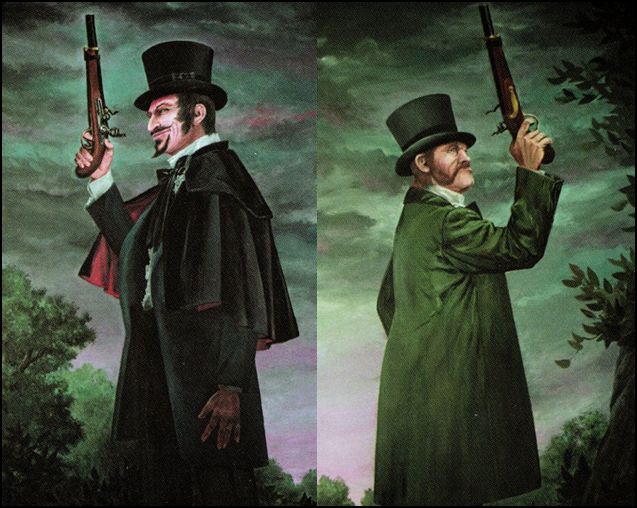 Doubling back through New Orleans Square you take the left fork in the road and venture into Frontierland.  Here you'll find firearms that you can actually shoot or at least shoot laser versions at the Frontierland Shooting Gallery. 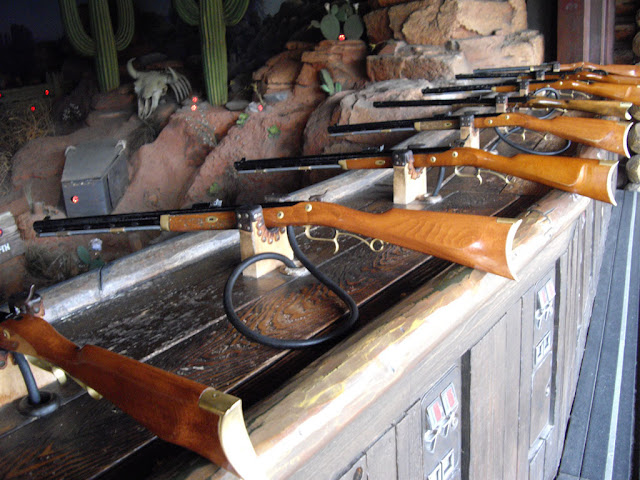 These are very realistic Hawken percussion-cap styled rifles with iron sights and, aside from the laser, give you a pretty good shooting experience and are a ton of fun as well.

Venturing into the local mercantile establishments you can find all the shootin' irons needed for your venture into the wild frontier.

This Western Ranger Deluxe Set gives you a Winchester rifle with realistic sounds and a shoulder stock for easier targeting!  You also get a Colt Revolver a large tin star badge and a red bandana because you just can't be a real cowboy without a red bandana. Or, you might want to go old school with a percussion cap revolving rifle. 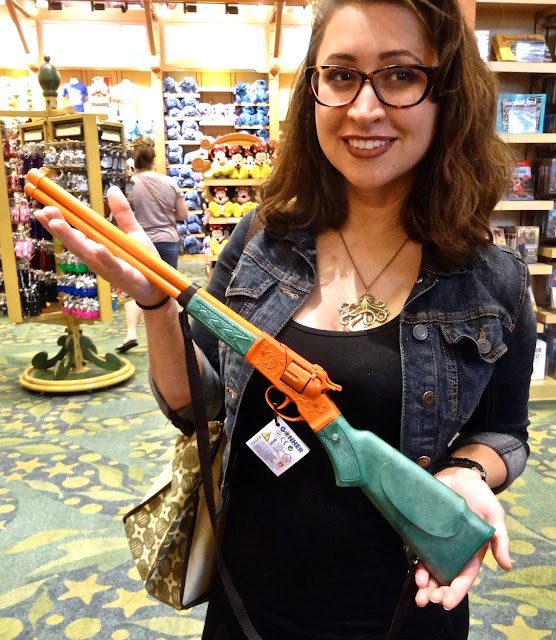 As my niece shows us this is an old Spanish made variant with  break-top access for reloading and a double set of hammers that fire through one barrel.  Perhaps Ian from Forgotten Weapons can provide some insight on this apparently rare specimen. 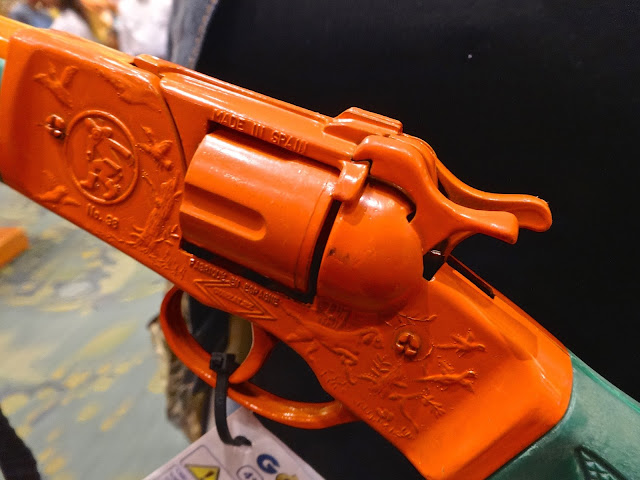 and smaller caliber revolvers like this one which I would guess is in .22 short. 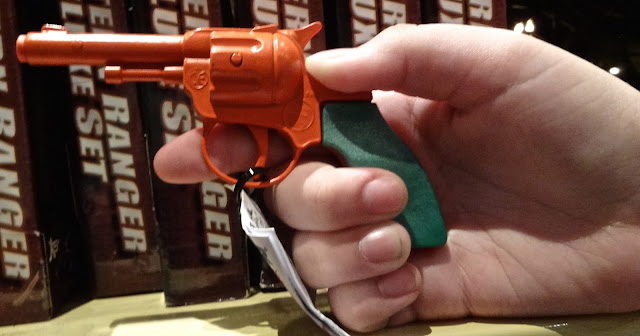 I also noticed a couple of large bore lever action rifles behind the counter, probably chambered in 50-90 for taking buffalo.

Heading out of Frontierland, you go across Fantasyland (which is false advertising because my fantasies are not represented there) and find yourself in Tomorrowland.

There you will be asked to help Buzz Lightyear defeat Emperor Zurg by flying double passenger space crafts while firing laser weapons. 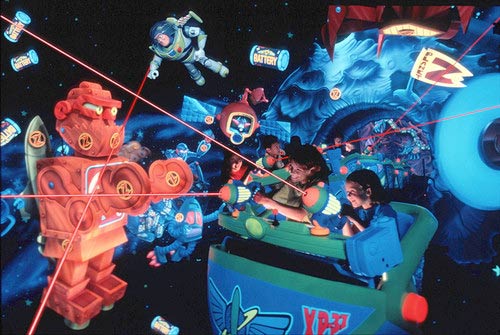 You can also go on Star Tours where you will come face-to-face with Darth Vader and a horde of Storm Troopers with their blasters aimed right at your space shuttle. 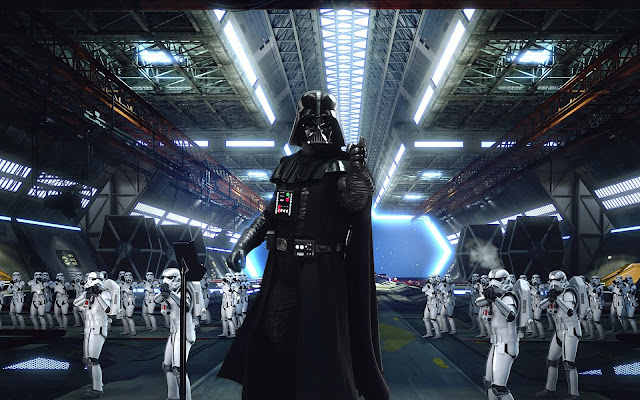 But fear not for the shops are full of the advanced weaponry you will need for the future that awaits you. 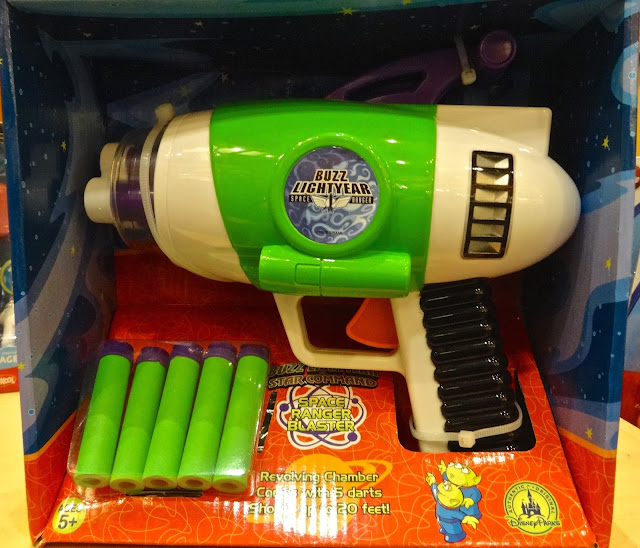 You can purchase an official Buzz Lightyear Space Ranger Blaster to help defeat Zurg.  In fact, you can also purchase Zurg's blaster which features a built in power generator and this one goes to ... 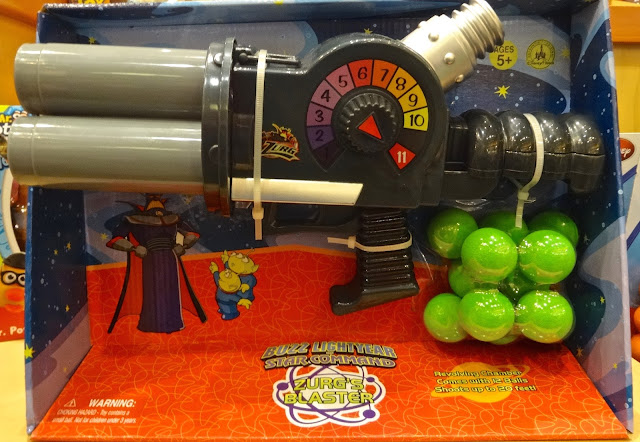 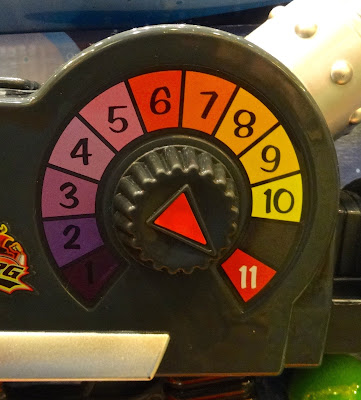 For facing off against the Empire you have several choices.  First you can purchase a Stormtrooper's blaster.

Or you can select the blaster of the galaxy's most famous bounty hunter which comes complete with a detachable shoulder stock.

You can even get Chewbacca's Bowcaster.

And lastly, you can pick up the ultra rare Broom-handle Mauser with a fire extinguisher nozzle attached as used by Hans Solo. 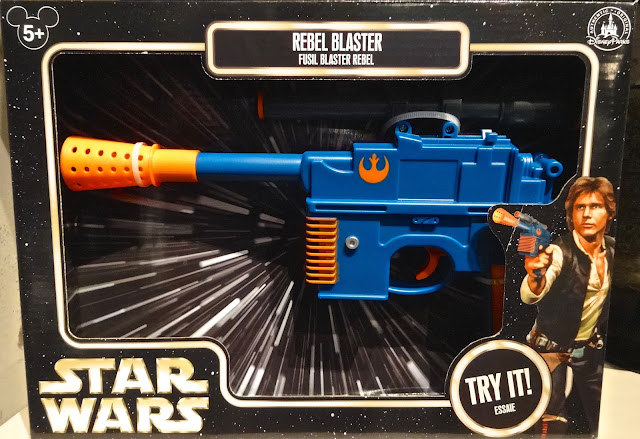 I find it interesting that Disneyland sits in center of one of the most liberal, left wing, politically correct states in the country and yet they still show firearms in their historical context (with the exception of the blasters) and offer more toy guns for sale than you are going to find at your local Target, K-Mart, Wal-Mart, or Toys-R-US stores.  I applaud them for it because no one has anything to fear from history (except repeating historical mistakes if they didn't learn anything from the first go-round) and no one has anything to fear from children playing at whatever their imagination conjures up.
Posted by Average Joe's Handgun Reviews at 7:52 PM

Yes, after the San Bernardino shooting in December Disney did remove all toy guns from their shop…with the exception of the Star Wars related toy guns. That was during the height of the Star Wars craze and they didn’t want to miss the related sales.