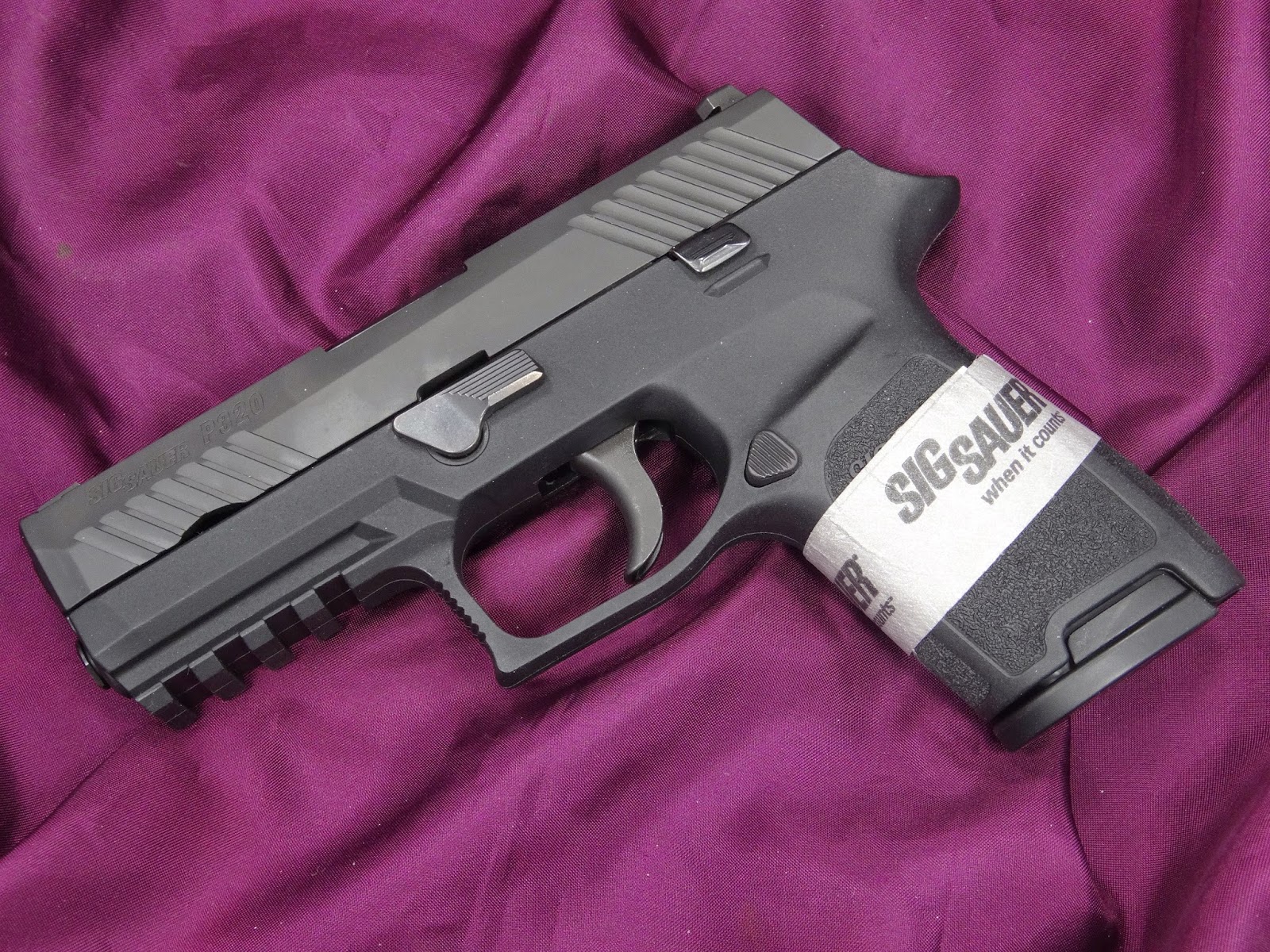 Scuttlebutt coming out of the Minneapolis Police Department is that they will be soon be transitioning over to the SIG Sauer P320.  I have been contacted by several MSP PD officers telling me this and asking me what I think about this pistol.  If this transitioning rumor is true it means two things:

1.  The Departmental Armorer and Training Officer(s) like the pistol and
2.  SIG has given them a bid that fits the Chief's budget.

Allow me to cut to the chase; if the rumor is true everything is going to be OK.  The pistol handles well, is user friendly, reliable and accurate.  You can't ask for much more.  Yes, it is rather ugly, but I can't say that many of the polymer, striker fired pistols are works of art.  However, beauty is in the eye of the beholder and just like a member of the opposite sex at closing time, once you experience the accuracy of this pistol it starts to look a lot prettier.

So what do you get with the P 320?  You start off with a 3.9 inch stainless steel barrel (a 4.7 inch model is also available as is a 3.6 inch subcompact).  The pistol, as pictured in this review, has an overall length of 7.2 inches and an overall height of 5.5 inches.  The slide is stainless steel and both the slide and the barrel are black nitron finished.  The 320 is chambered in both 9mm and .40 Smith & Wesson with the 9mm chosen for this review.  The magazine holds 17 rounds of 9mm with 14 rounds available in the .40 caliber version.  The grips are fashioned from polymer which helps keep the weight down at 26 ounces.  This is a Double Action striker-fired pistol with a trigger pull of 5.8 pounds as measured on my Lyman digital scale.  The pistol is available with what SIG describes as "contrast sight" or, as in the reviewed pistol, SIGlite night sights. 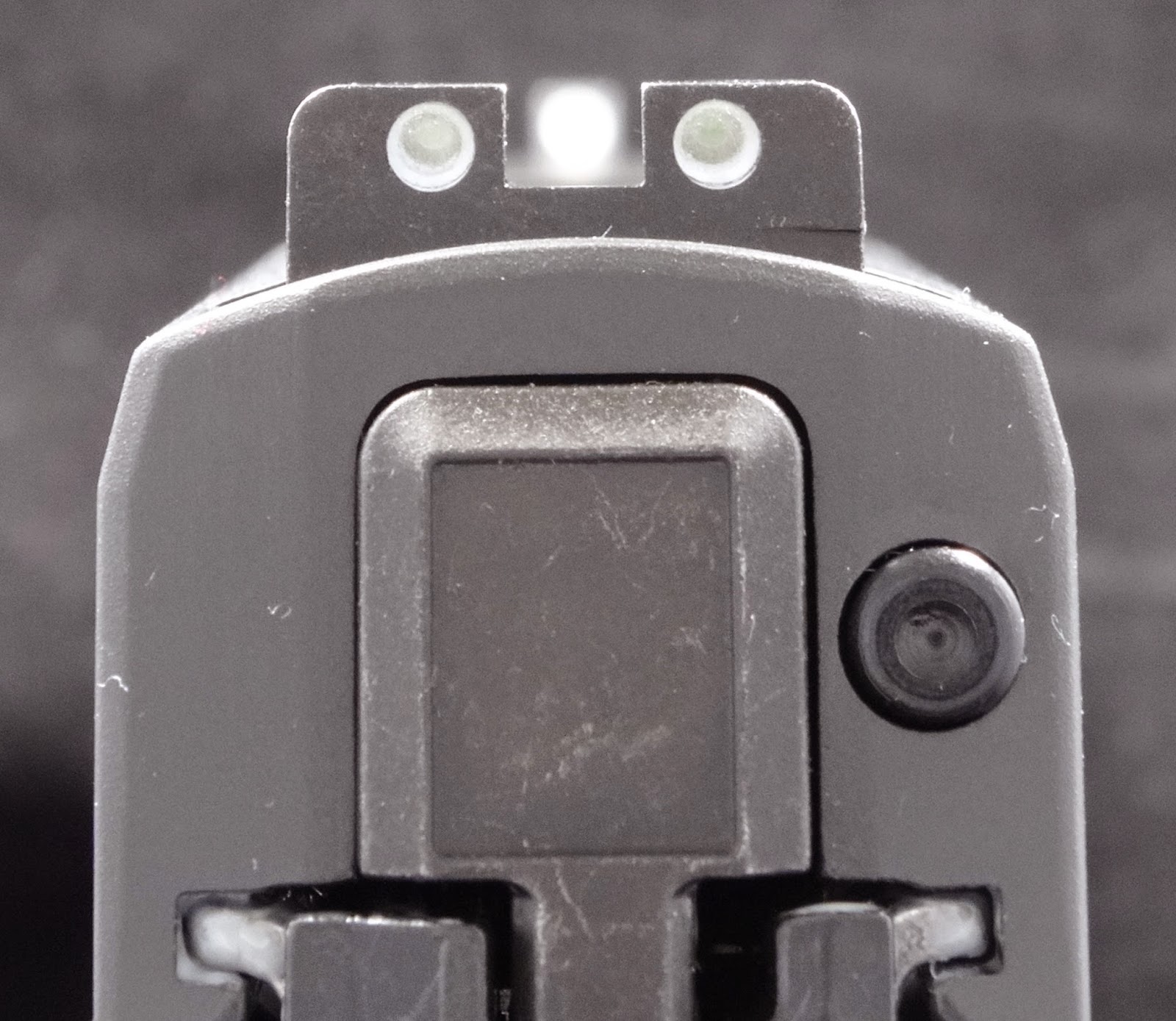 SIGlite night sights during the day and in the dark. 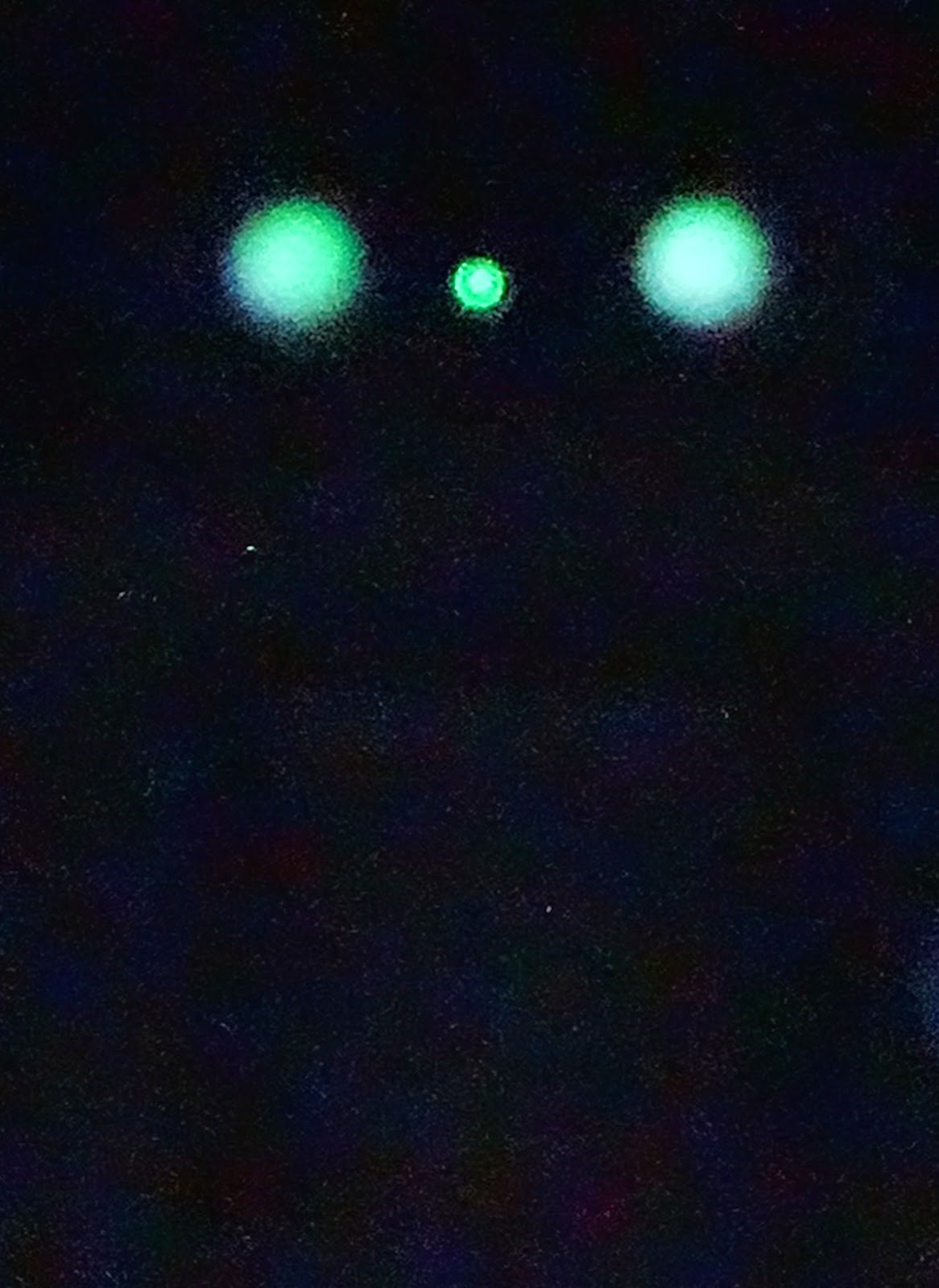 The night sights are nice and bright.

The P320 has been designed and manufactured for ease of use and for law enforcement that translates into the ability to get officers familiar and proficient with the pistol in less time.  This is accomplished by producing an ergonomic pistol with fewer and flatter controls.  There is no external safety or decocker that the officer must extensively train with in order to build the muscle memory required to make their engagement an automatic physical response by the officer.  In fact the only controls are the slide stop lever 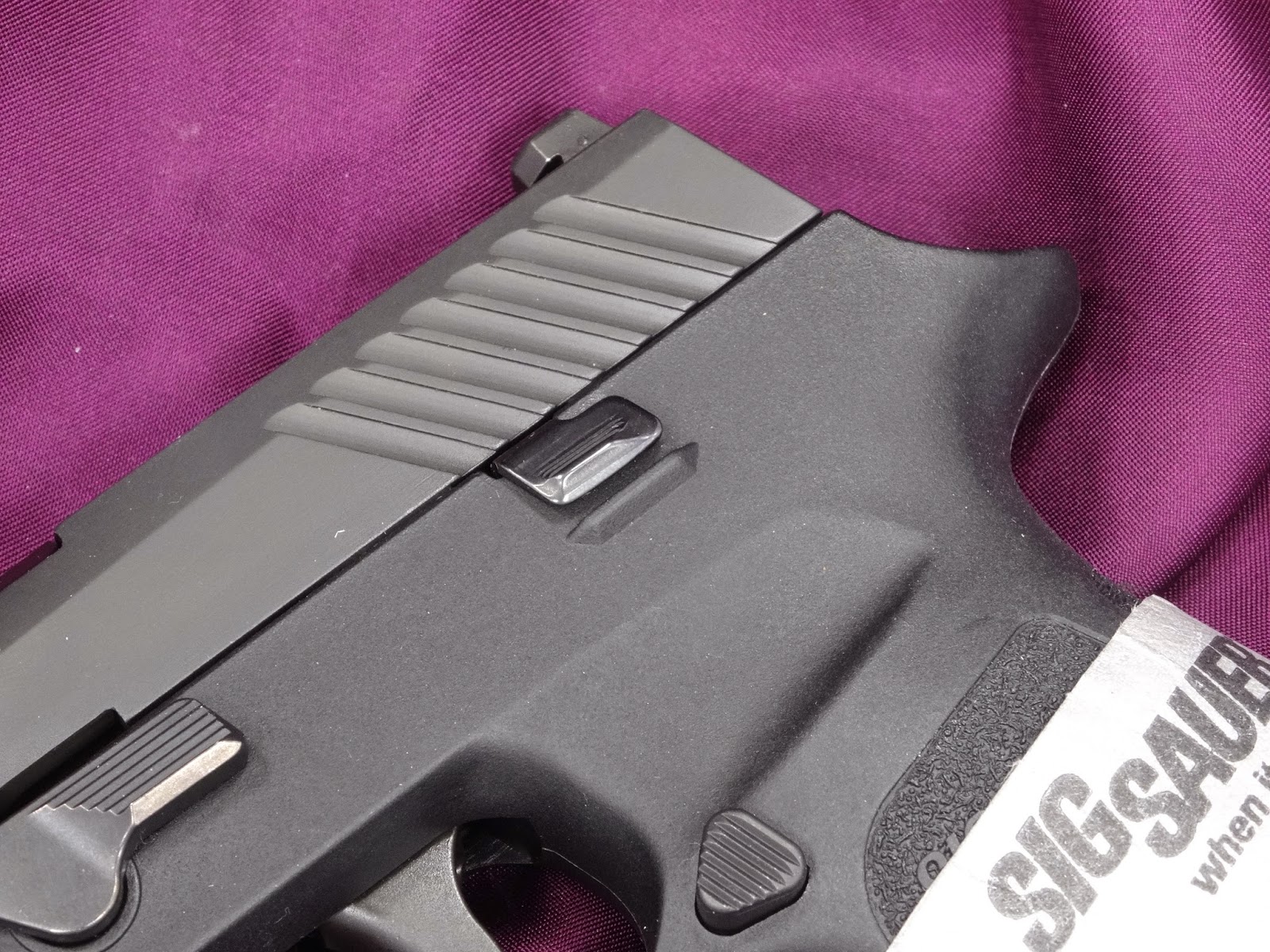 and the disassembly lever. 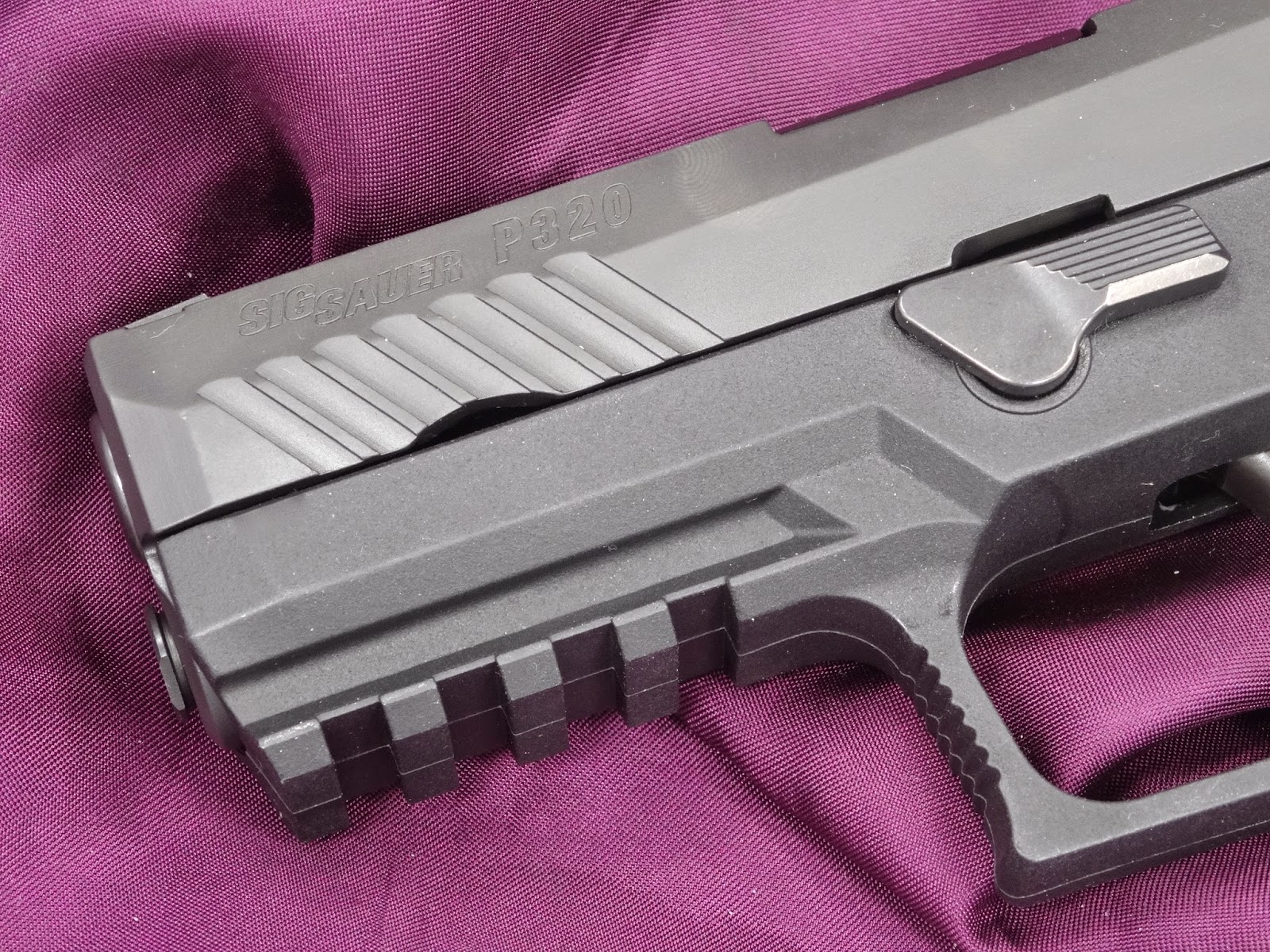 And speaking of disassembly, unlike many striker-fired pistols, the P 320 does not require the trigger to be pulled as a part of the take-down process.  Not having to pull the trigger lessens the chance of a negligent discharge if the user forgets to eject the cartridge from the chamber before breaking down the pistol. 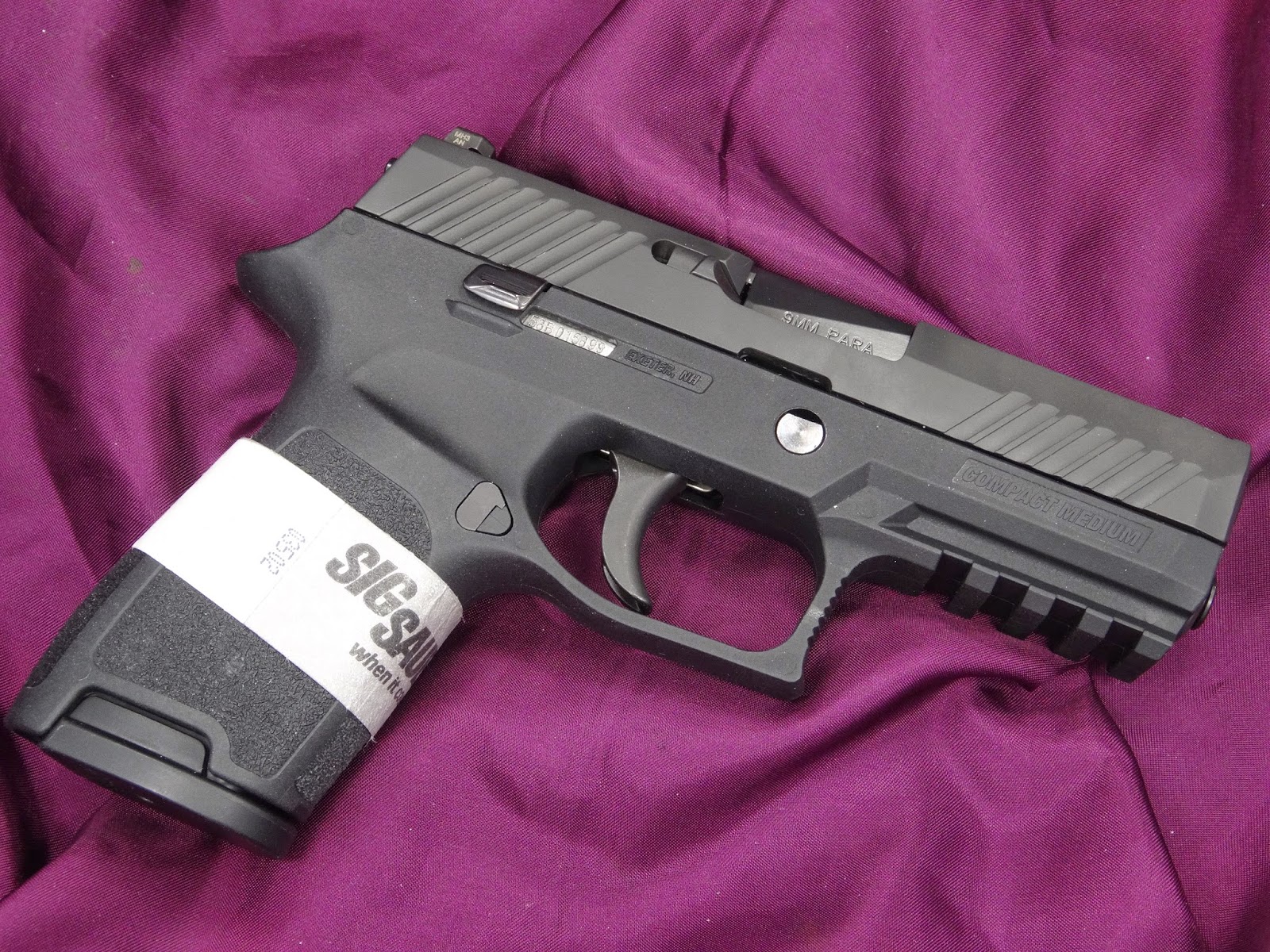 The pistol also has the standard tactical accessory rail so that you can hang lights, lasers, Japanese paper lanterns, Christmas stockings or anything else that you would like on it.

Many pundits, including myself, initially looked at the 320 and observed that it was merely the hammer fired model 250 in which the hammer-firing mechanism has been swapped out for a striker-firing mechanism.  We proffered that SIG lost one of the benefits of a striker-fired pistol which is a lower bore axis due to the fact that the slide did not need to sit high enough to accommodate a hammer firing apparatus.  We opined that this would result in greater muzzle flip than had they redesigned the slide and frame to make it proportionate with the size of the striker device.  These were undoubtedly true conclusions to draw however they were completely of no moment when firing the pistol as you will see in the targets. 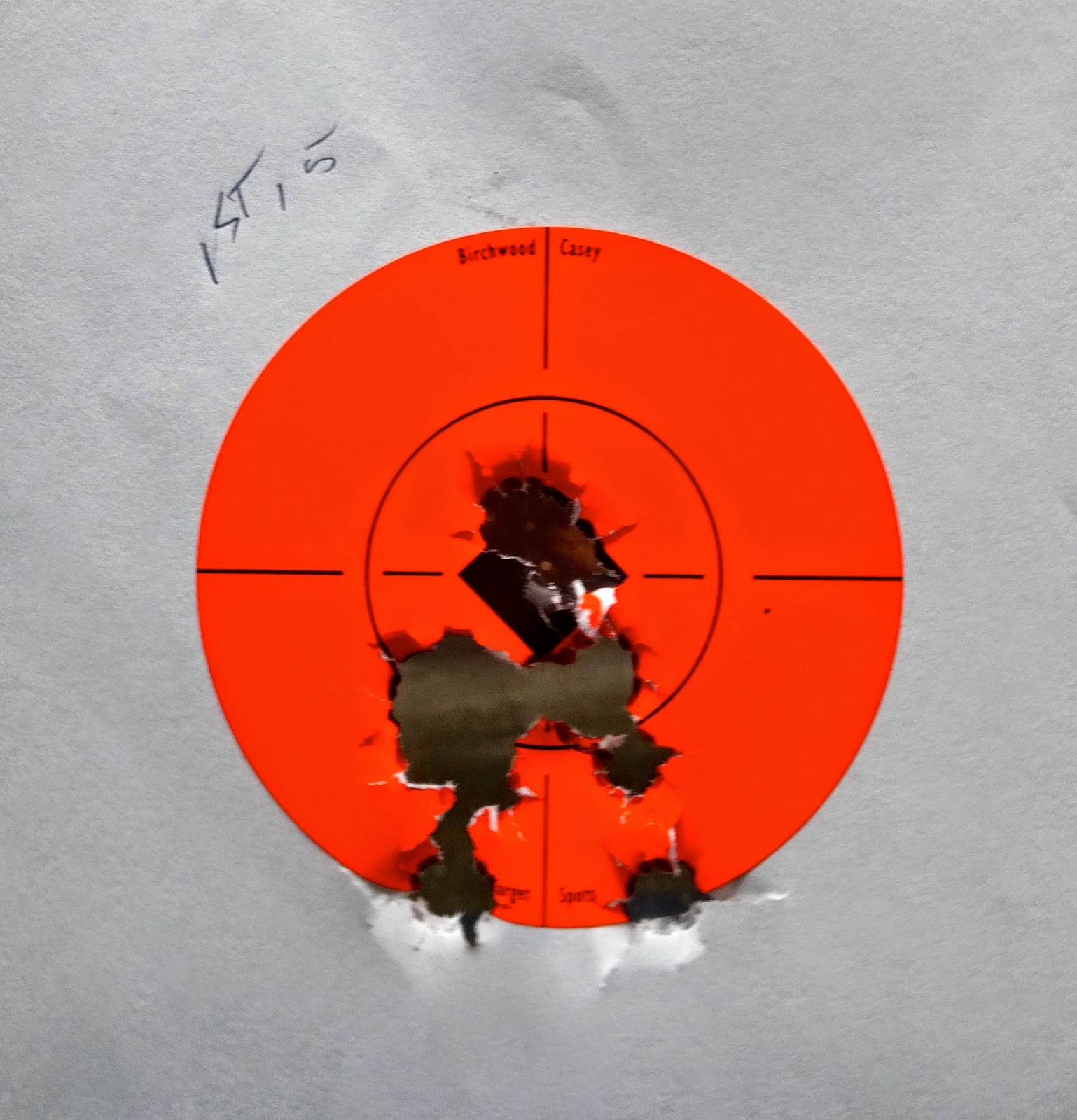 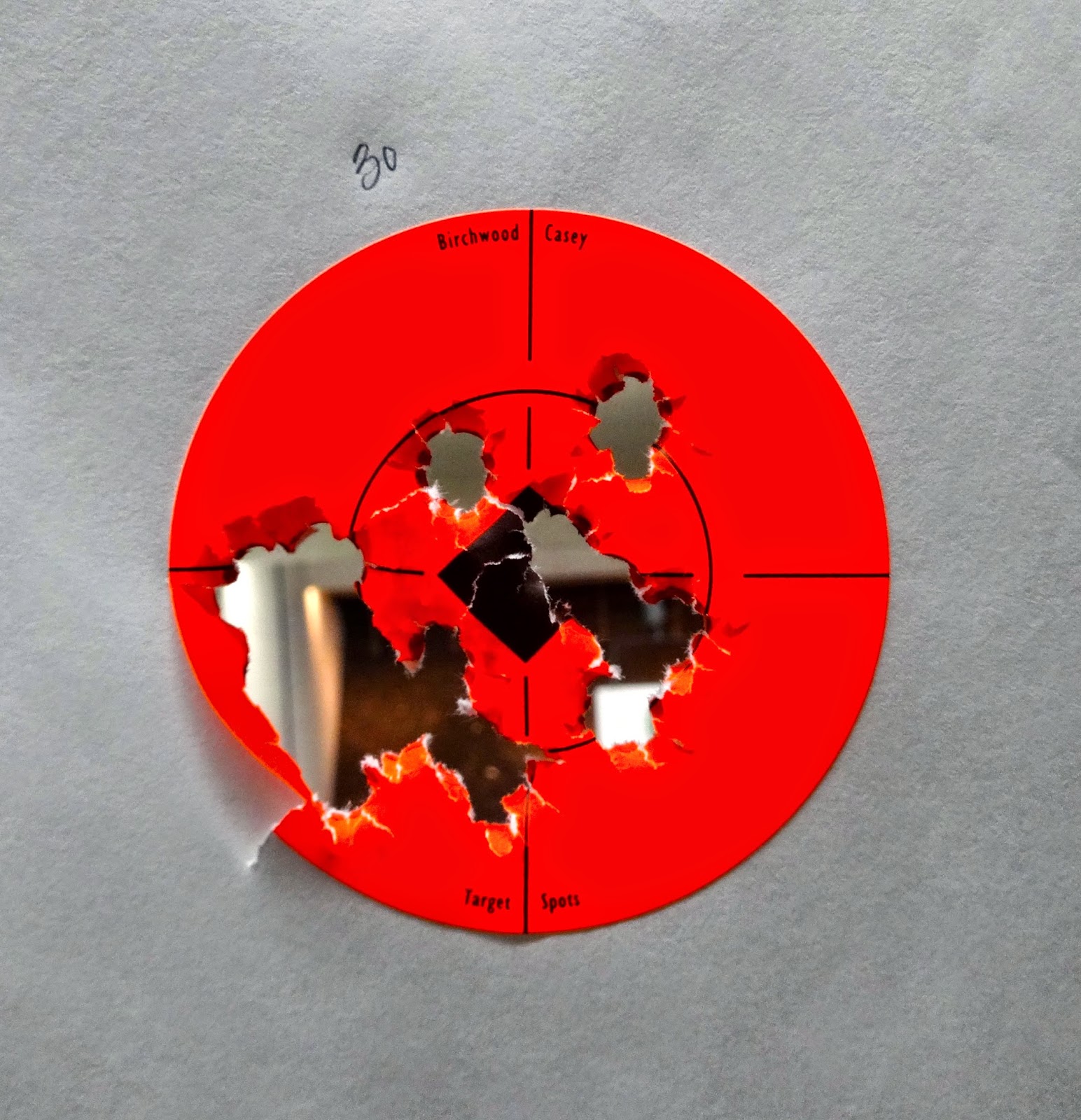 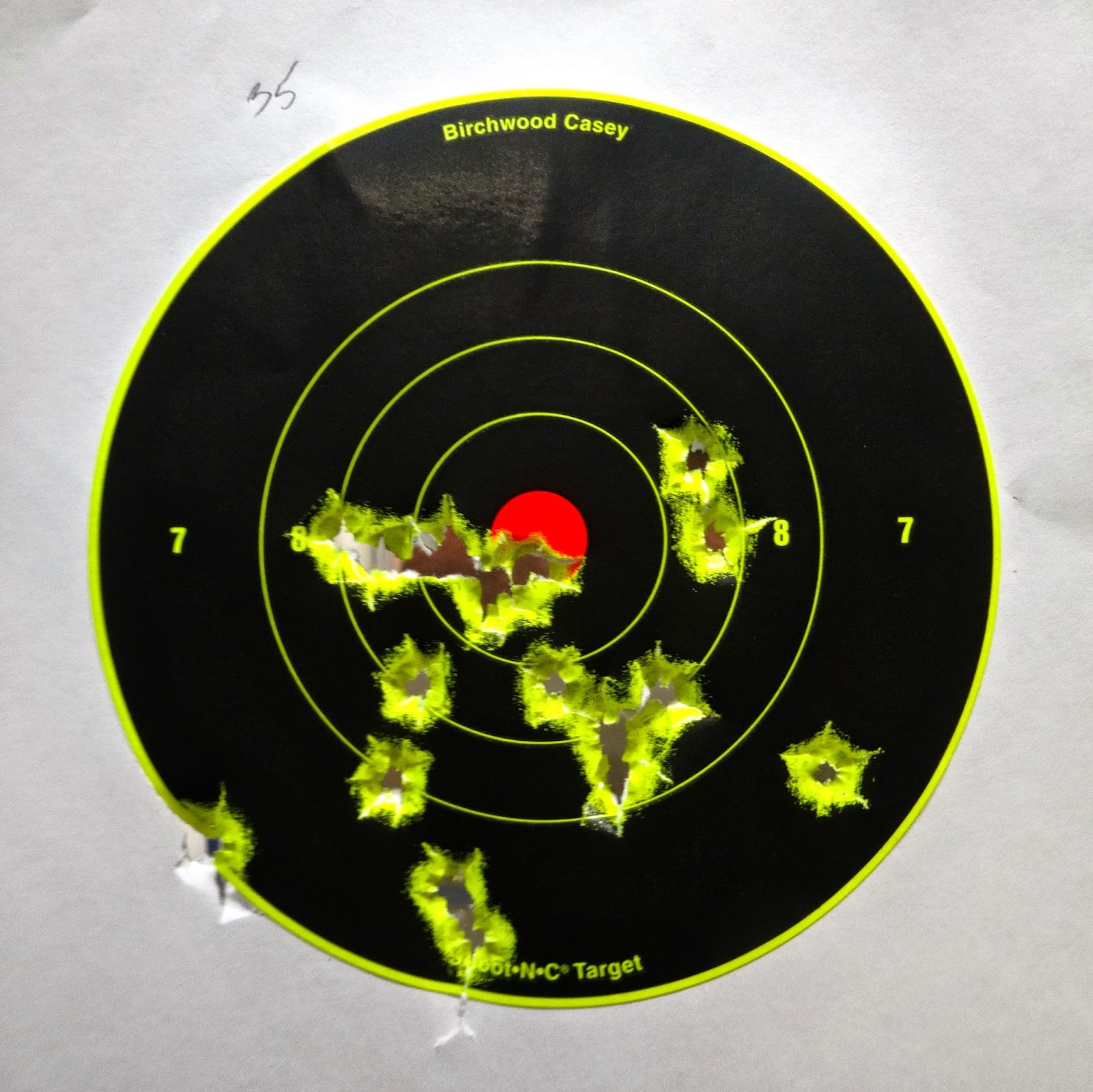 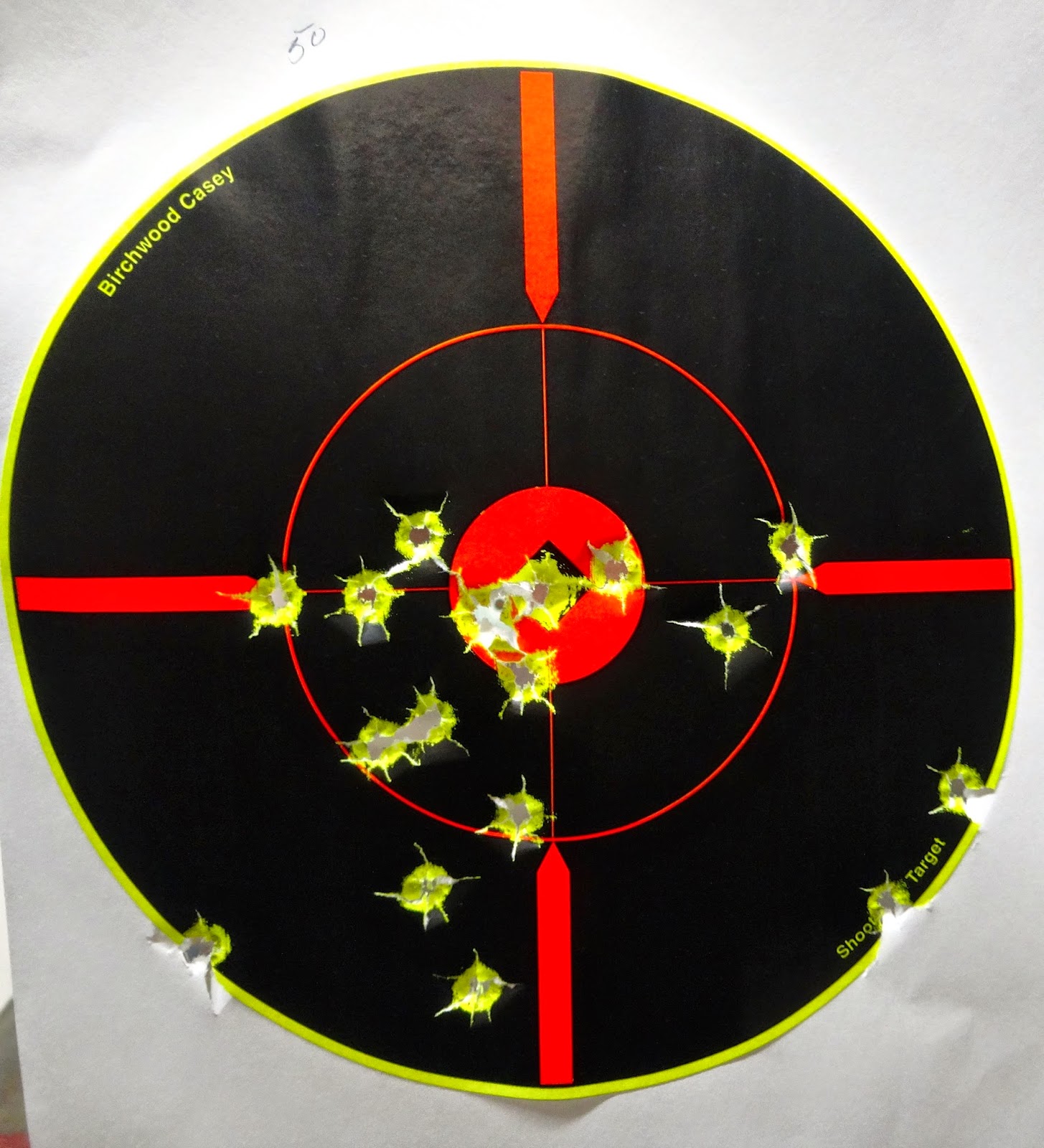 As expected, the groups spread out as the targets were extended in distance but the pistol produced solid hits on every one of them. The accuracy is more than sufficient for defensive purposes on human-sized threats.

I wrote this review with the police officer in mind since that is where inquiries about the P 320 had originated but all of the great handling and shooting attributes of this pistol can also be utilized by the non-law enforcement shooter as well.


Posted by Average Joe's Handgun Reviews at 11:10 AM

Great breakdown of exactly what you can expect with this one. Thanks for sharing!

I took a Tactical Hand gun class a few months back using my wife's Sig P238, 9mm. The class of 13 people, all had Glocks. Lots of problems with the Glocks jamming - guess even a Glock needs oil once in a while.
Anyway, the instructor was impressed with the fast trigger of the Sig. Instructor is a Glock person also. That made me pick Sig for my carry.
After looking over a couple models I picked a P320, But my new P320 , 40 cal. had feed problems right off the bat using Herters ammo. Many jams with first 75 rounds of Herters ammo. Switched to 50 round of Sig ammo and 50 rounds of American Eagle.
NO jams.
Herters ammo does look a little longer than the other manufactures.