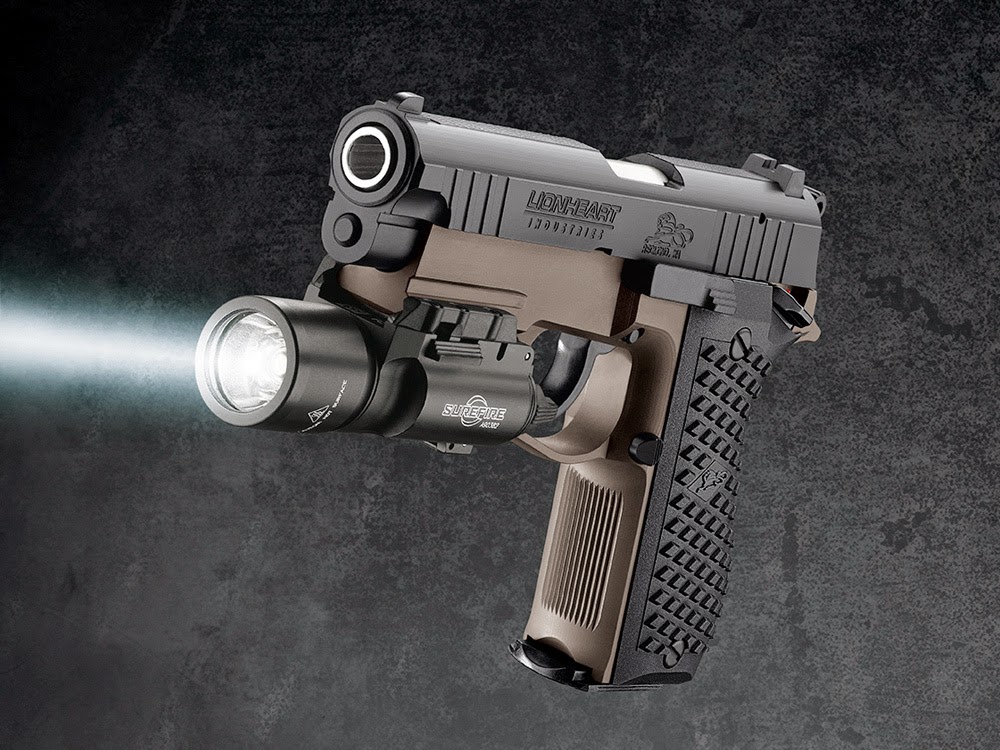 Lionheart Industries introduced the mid-sized LH9 in 2013 and at this point you may be thinking two things:

1. Just what we need another mid-sized 9mm!
2. Haven't I seen this pistol before?

The answer to the second question also takes care of the first one as well.  The LH9 is manufactured by S&T Daewoo of South Korea 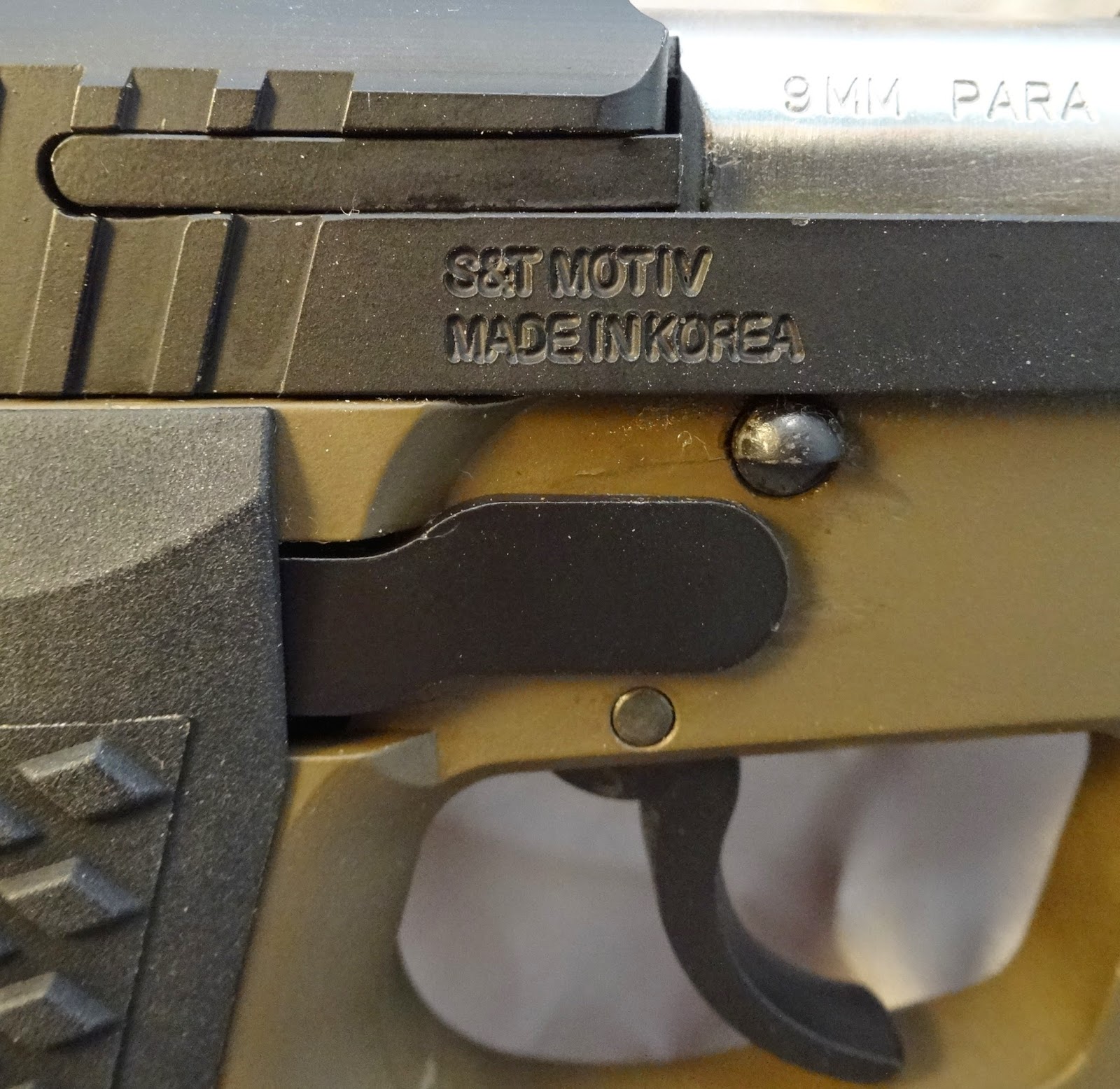 and is an updated version of their K5 pistol.  The K5 was imported into the U.S. a while back and although it gained a devoted cult following it did not take any market share away from Glock, SIG Sauer, Smith & Wesson, Springfield or any other manufacturer in the competitive 9mm field.  The feature that made the K5 an interesting pistol was what they referred to as its "Fast-Action" which had been adopted by the South Korean Military Forces.  That feature is still present in the LH9 and has been renamed the "Tri-Action". 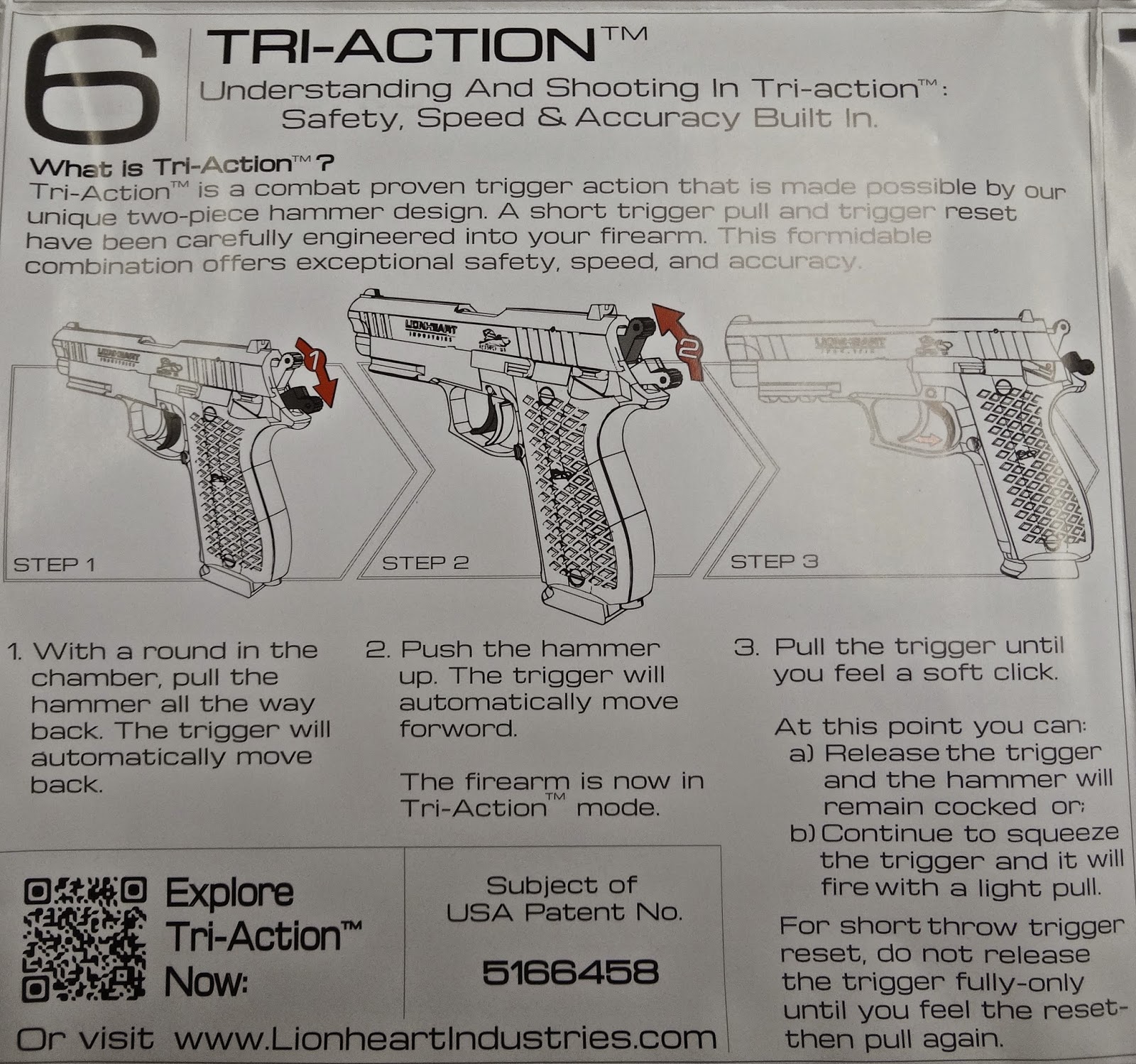 While the Tri-Action explanation from the manual is shown above let me attempt to give my own take on this feature.  You can carry the LH9 in one of three modes:


This is a surprising feat of engineering allowing you to have a single action pistol that does not require the hammer to be locked in its rearward position and does not require you to manipulate a safety during a stress-fire encounter as you would have to do with any other single action pistol.  There is also a benefit to those carrying the pistol in a duty capacity as they do not have to worry about a misinformed bystander becoming uncomfortable (and perhaps filing a complaint) when they see the hammer locked back in a holstered pistol.

The slide and barrel are forged from 4150 steel and the frame is forged from 7075-T6 Aluminum.  The finish on the LH9 is Ceracote and is available in a completely black pistol or with a black slide on a "patriot brown" frame.  Quite frankly I found the patriot brown aluminum frame to be a rather nice change of pace in this world of black polymer pistols. 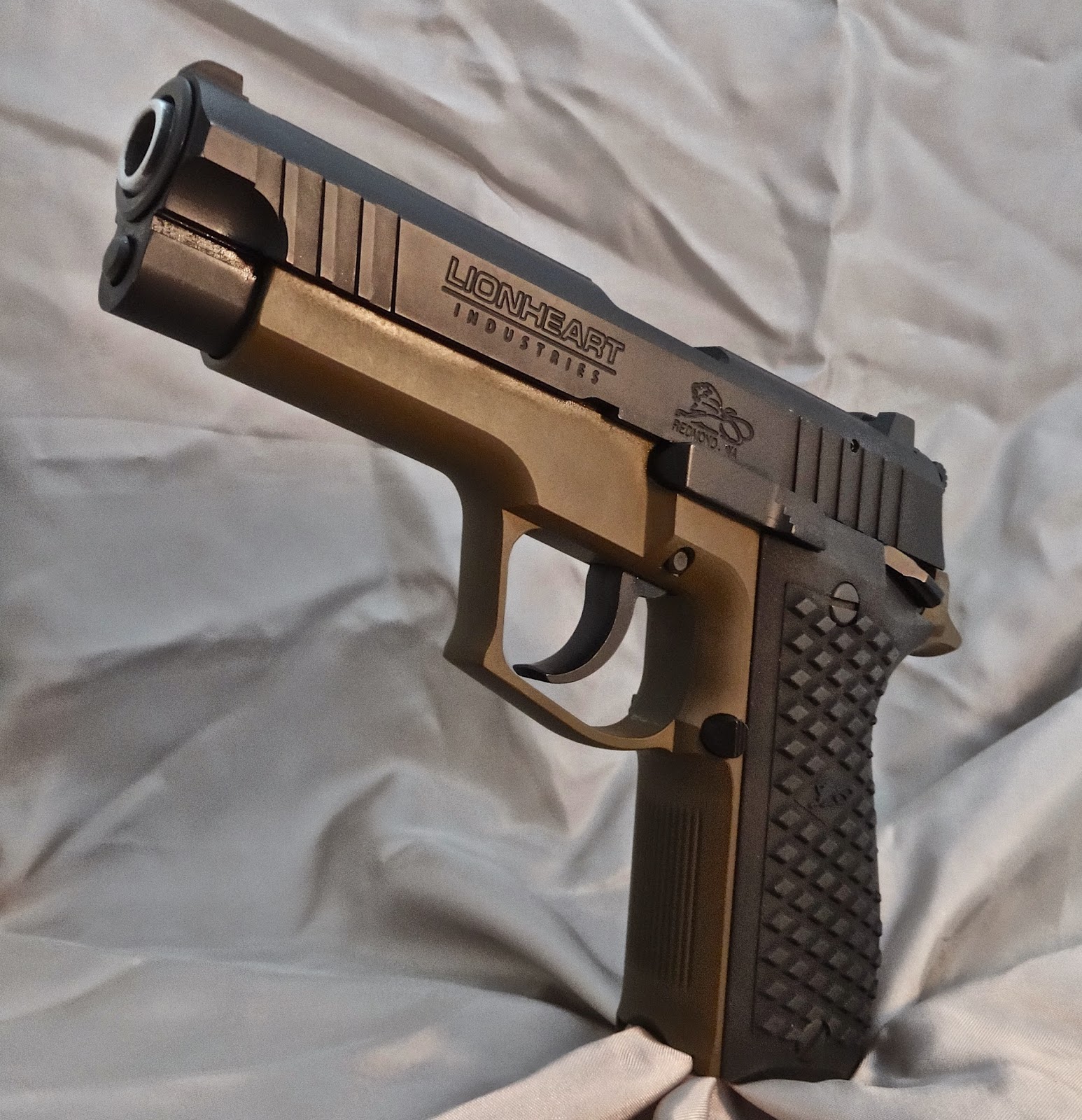 The grips are black polymer with a pattern of diamonds which provide a very secure hold.  When I first saw the grips I wondered if the diamond pattern was going to be abrasive but there aren't really any sharp edges on the grips (or anywhere else on the pistol).

The sights are of the common three dot variety 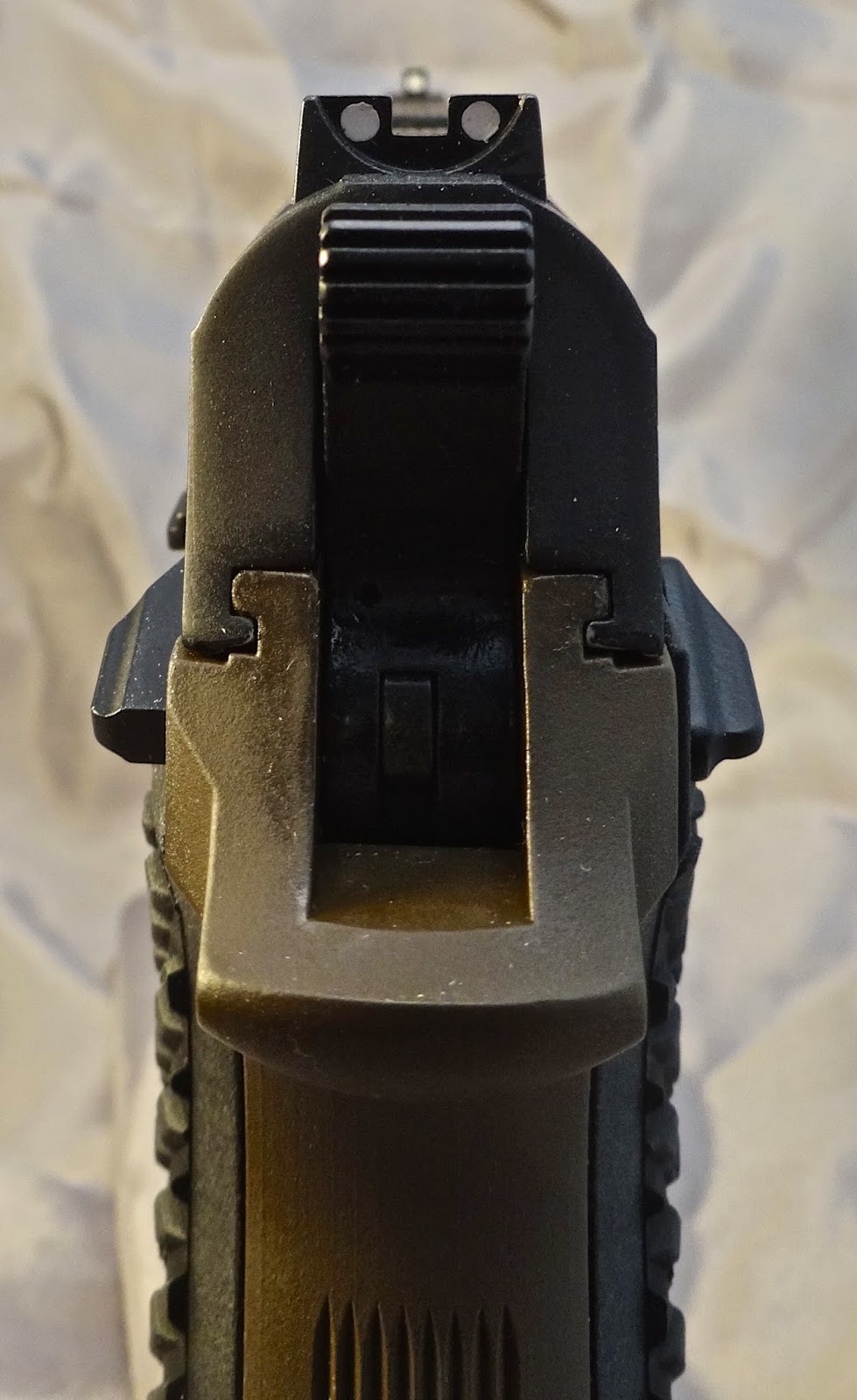 although fiber optic and night sight options are available from the factory.

So let's see how she shot:

Here's fifteen rounds at 21 feet and, as usually, I am off to the left. 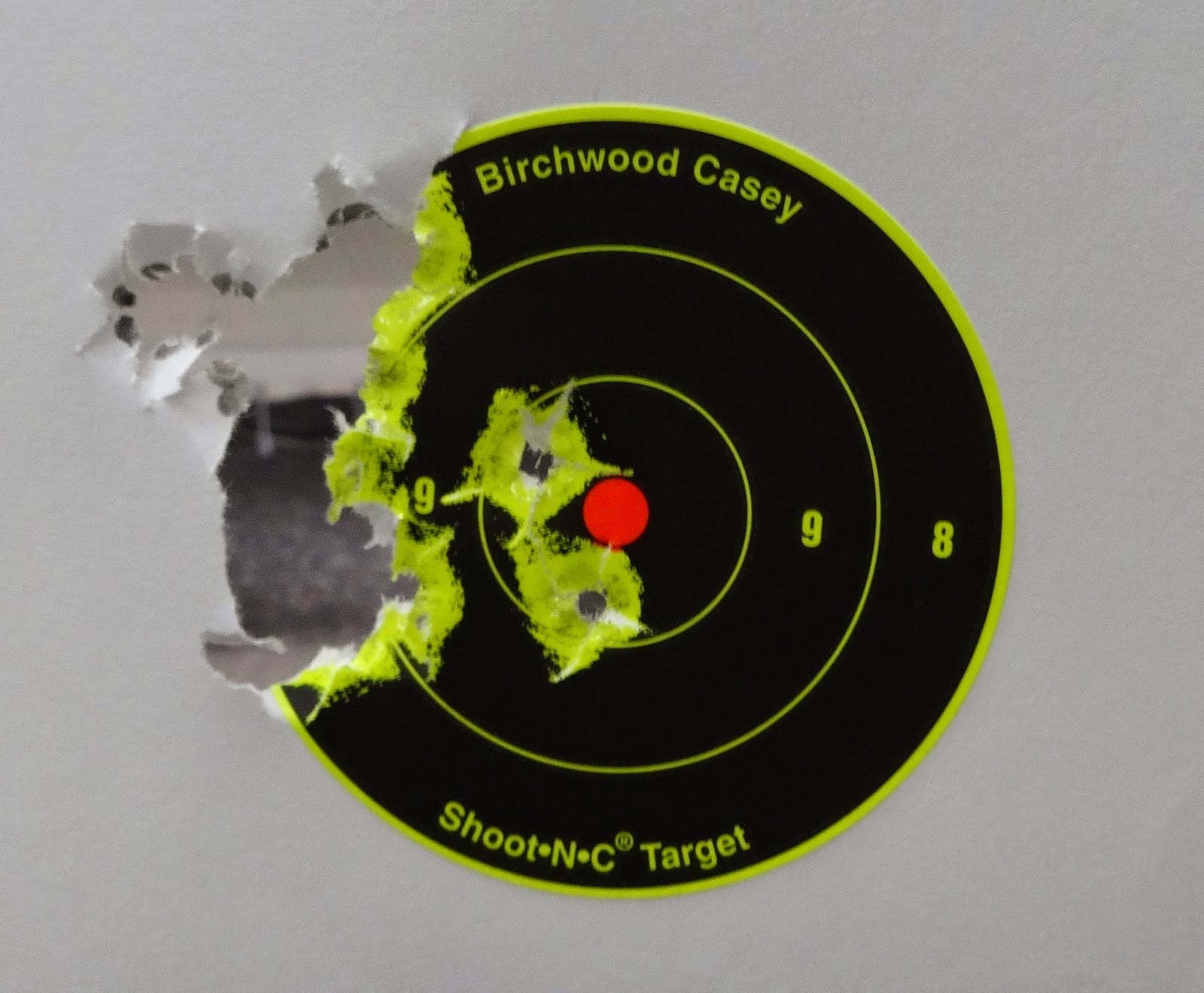 The trigger pull on the LH9 is really good and it is enhanced by the wide and smooth trigger. 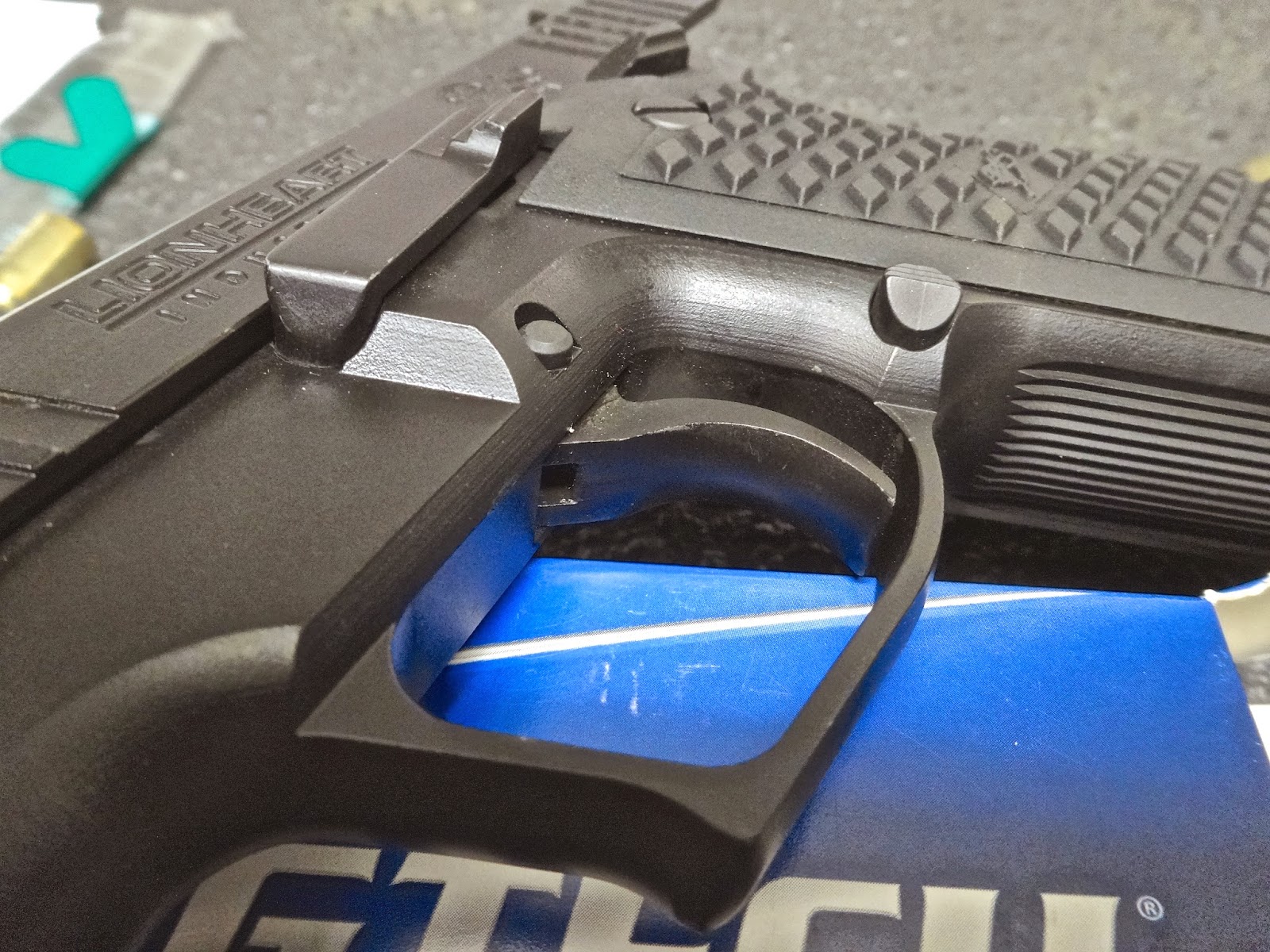 Here are thirty rounds at 30 feet. 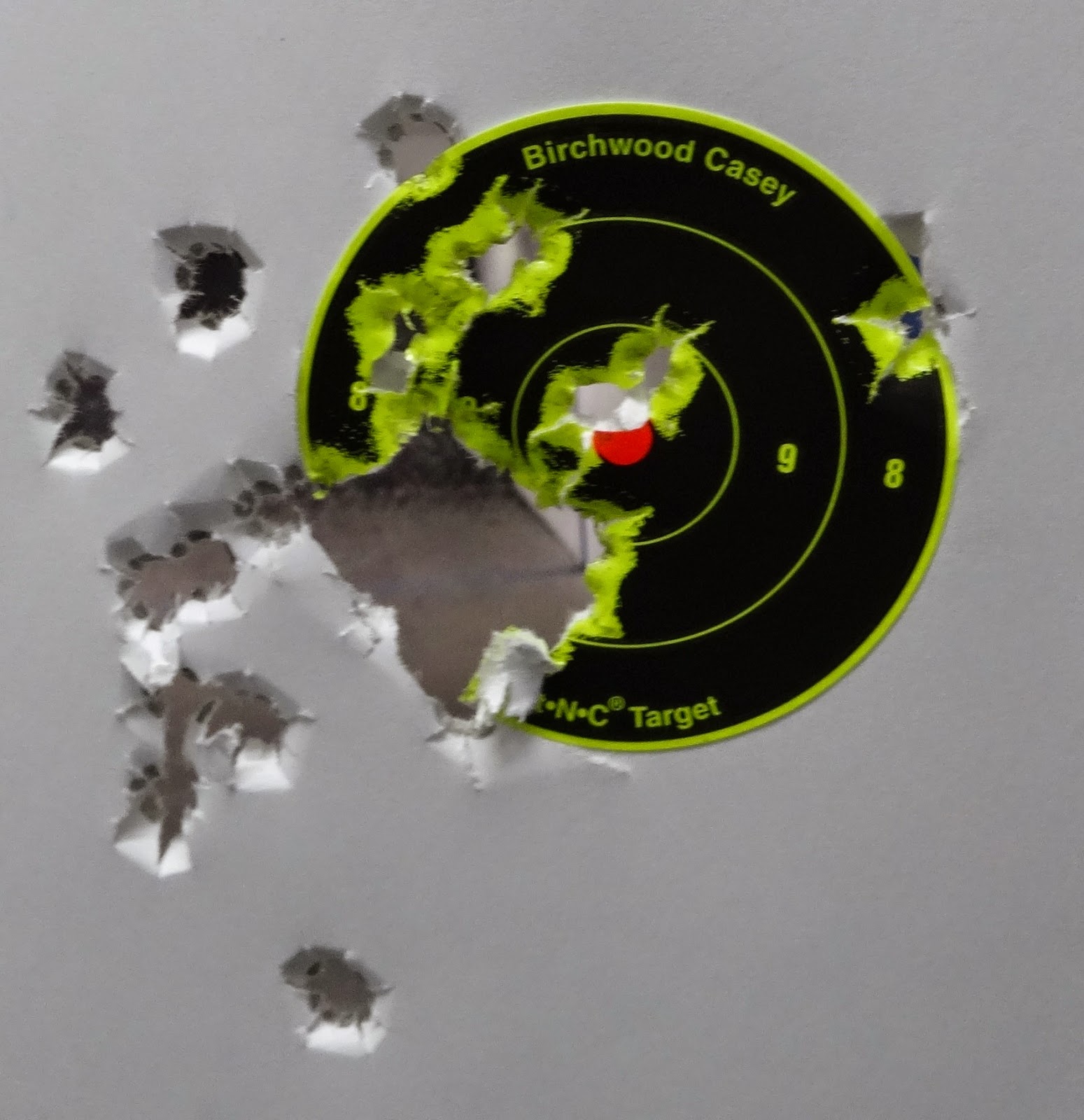 And thirty rounds at 40 feet 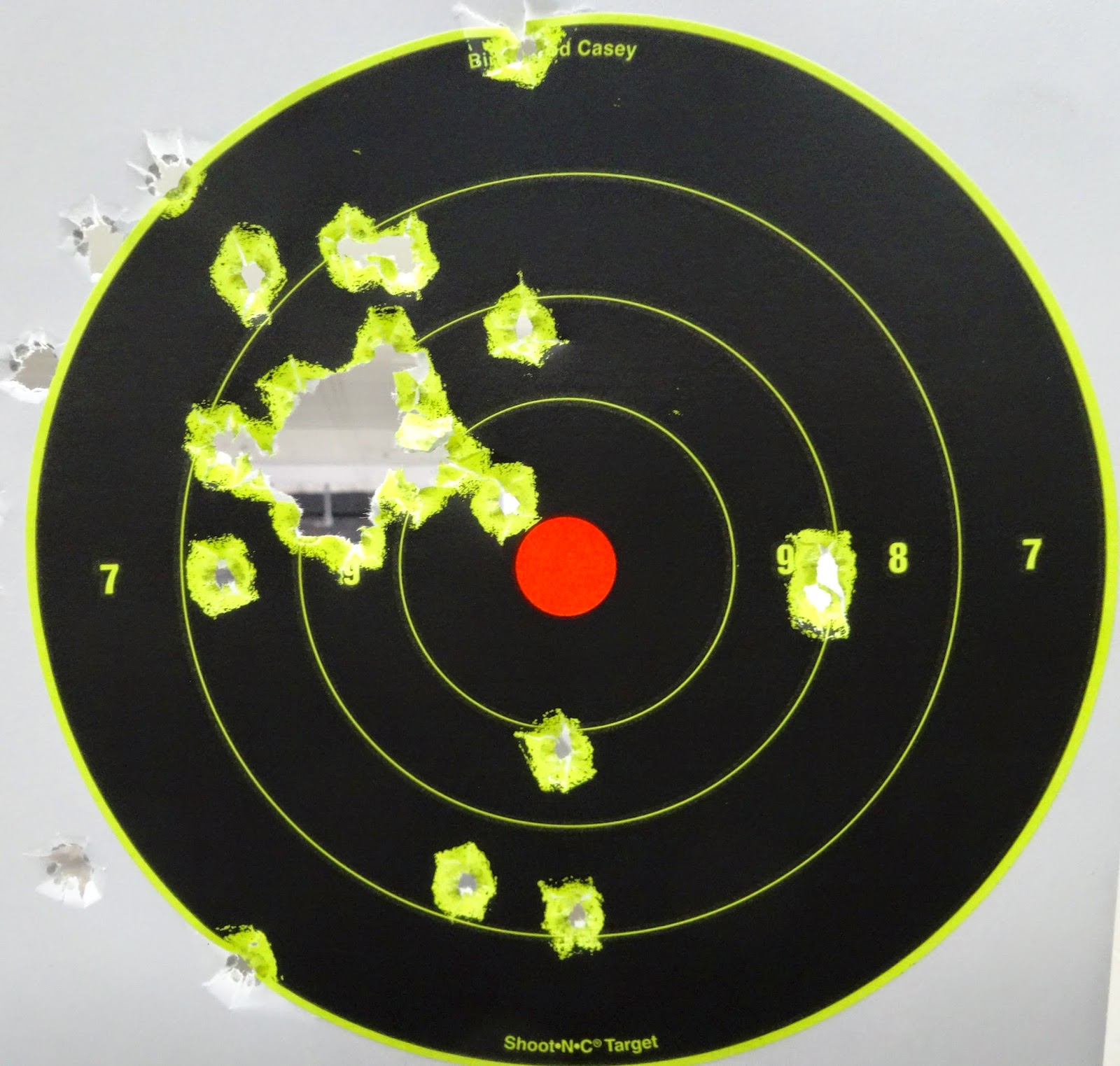 
The accuracy is better than needed to handle most defensive encounters and I am sure that with additional practice my accuracy would improve.

There are a lot of very well thought out features built into this pistol but it doesn't stop there.  Instead of coming in a plastic box with accessories just thrown in, the LH9 comes in a ballistic nylon bag that is probably the most useable bag I have ever seen come with a pistol. 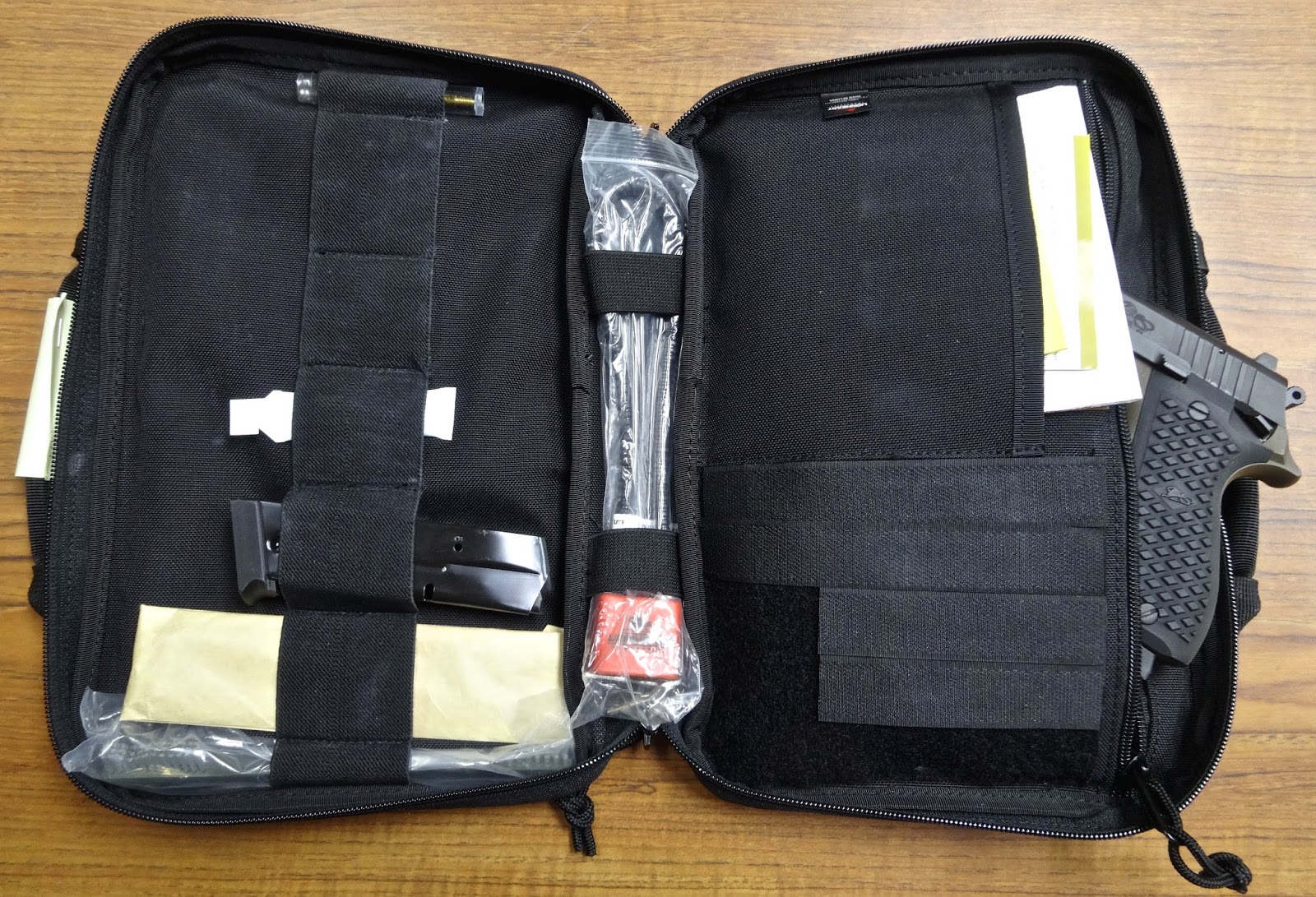 The pistol is stowed in a zippered compartment on the right side of the bag which also contains a pouch for the manual and has a large velcro area with four strips to secure anything else that you might want to take with you.  The cable lock is secured in the middle of the bag by two elastic straps.  A lot of manufacturers could take note of this as in far too many instances the lock is just haphazardly thrown in the case.  On the left side of the case there are elastic straps to secure the extra magazine, nylon cleaning brush, cleaning rod, cleaning rod attachments and a tube of Frog Lube.  The pistol is treated with Frog Lube products at the factory and I will say that the slide to frame action is very smooth!

I know there are a lot of gun snobs who will dismiss the Tri-Action as a gimmick or a solution to a nonexistent problem but I think they are missing the point of having a pistol that can be fired in single action mode, with the hammer down and without having to manipulate a manual safety during the stress of a shooting scenario.  There are also those who might dismiss the pistol because it comes from Korea but their military is always at a heightened state of readiness as they are under the constant threat of a attack from their northern border.  That they place the security of their country and populace to a defensive battery that includes this pistol says a lot to me.


Posted by Average Joe's Handgun Reviews at 2:26 AM