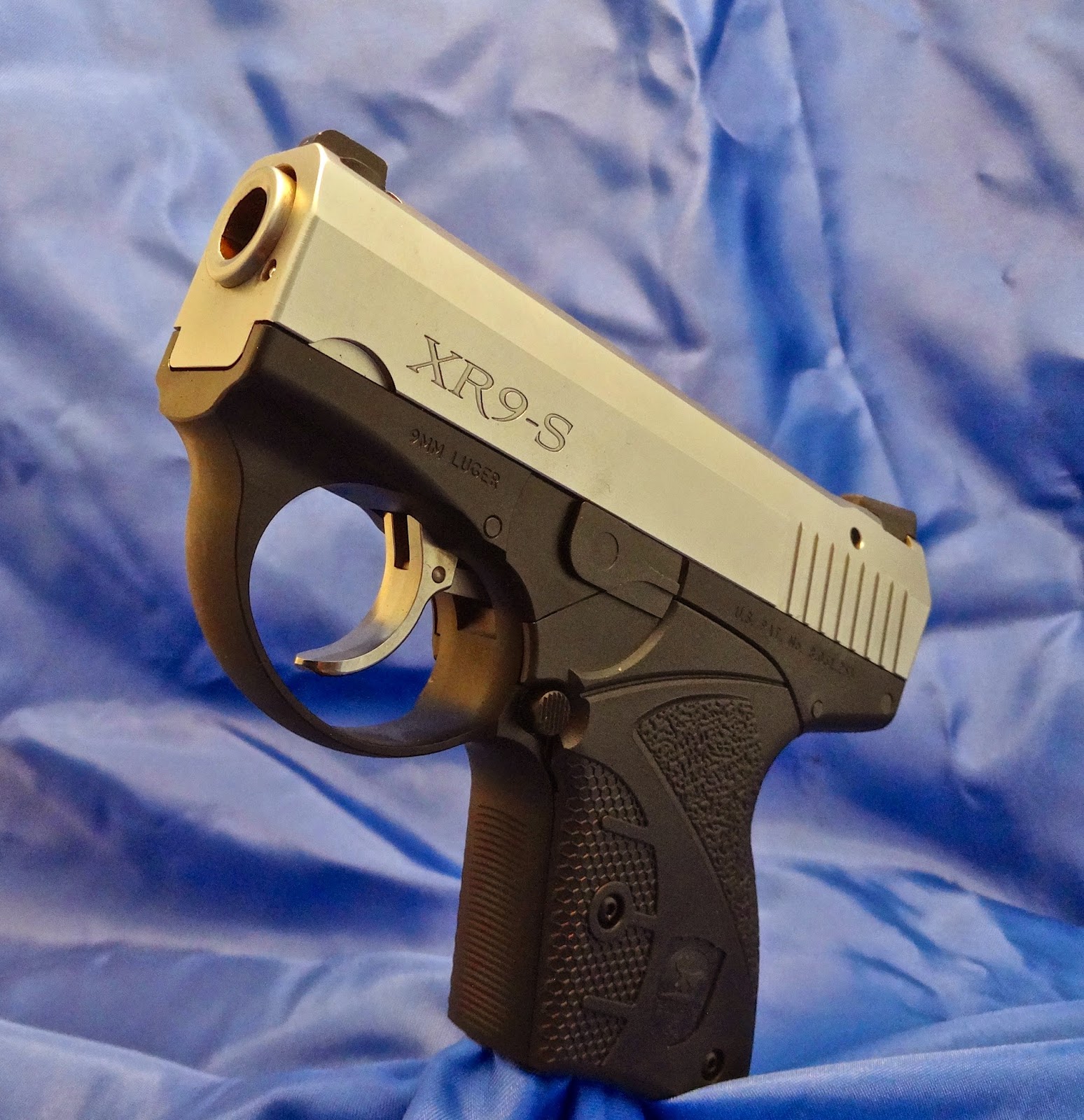 Is there such a think as a snub nosed semi-automatic pistol?  If there isn't, there is one now: the Boberg XR9-S or "short" pistol with a 3.35 inch barrel.

If you are not familiar with these pistols you might be looking at the above image and thinking that there is no way that the pistol has a 3.35 inch barrel.  But, it does.  About 7 years ago Arne Boberg began his quest to engineer the most compact 9mm pistol on the market.  To make that happen the 3.35 inch barrel sits all the way back over the magazine.  A fairly unique rear extraction system is used to charge the pistol in which a claw grabs the cartridge rim while it is in the magazine, pulls it backwards and then inserts it into the chamber. 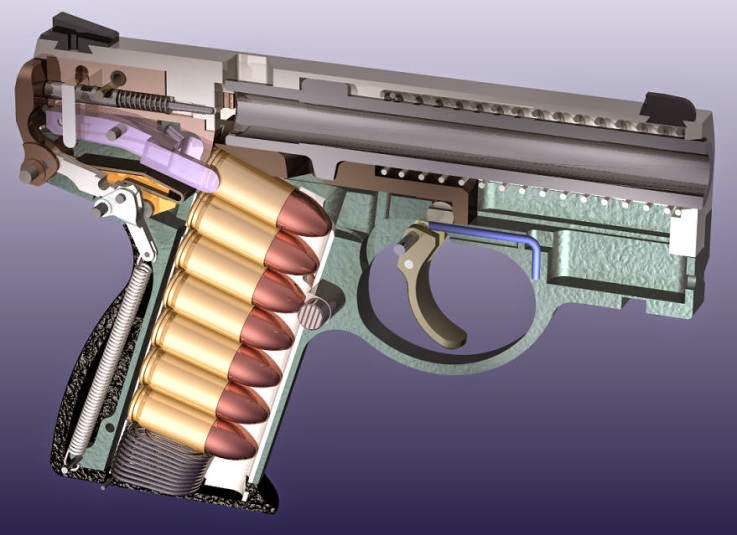 In Boberg's image above you can see how far back the barrel sits and how the mechanism grabs the cartridge and extracts it as the slide retracts. 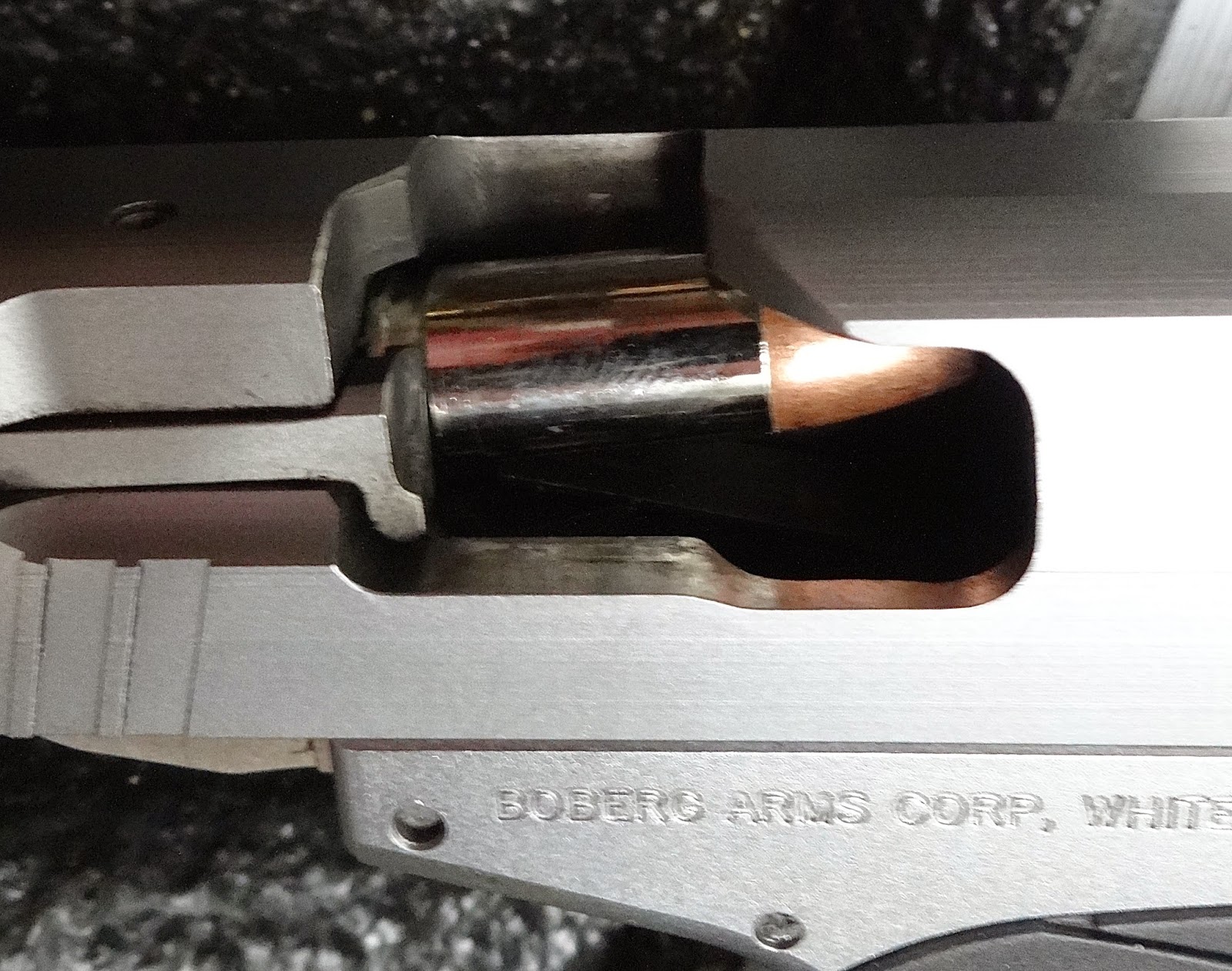 And then pushes it into the chamber as the slide returns to battery.

Because of the way that the cartridges feed it almost seems like you are putting the ammunition in the magazine backwards. 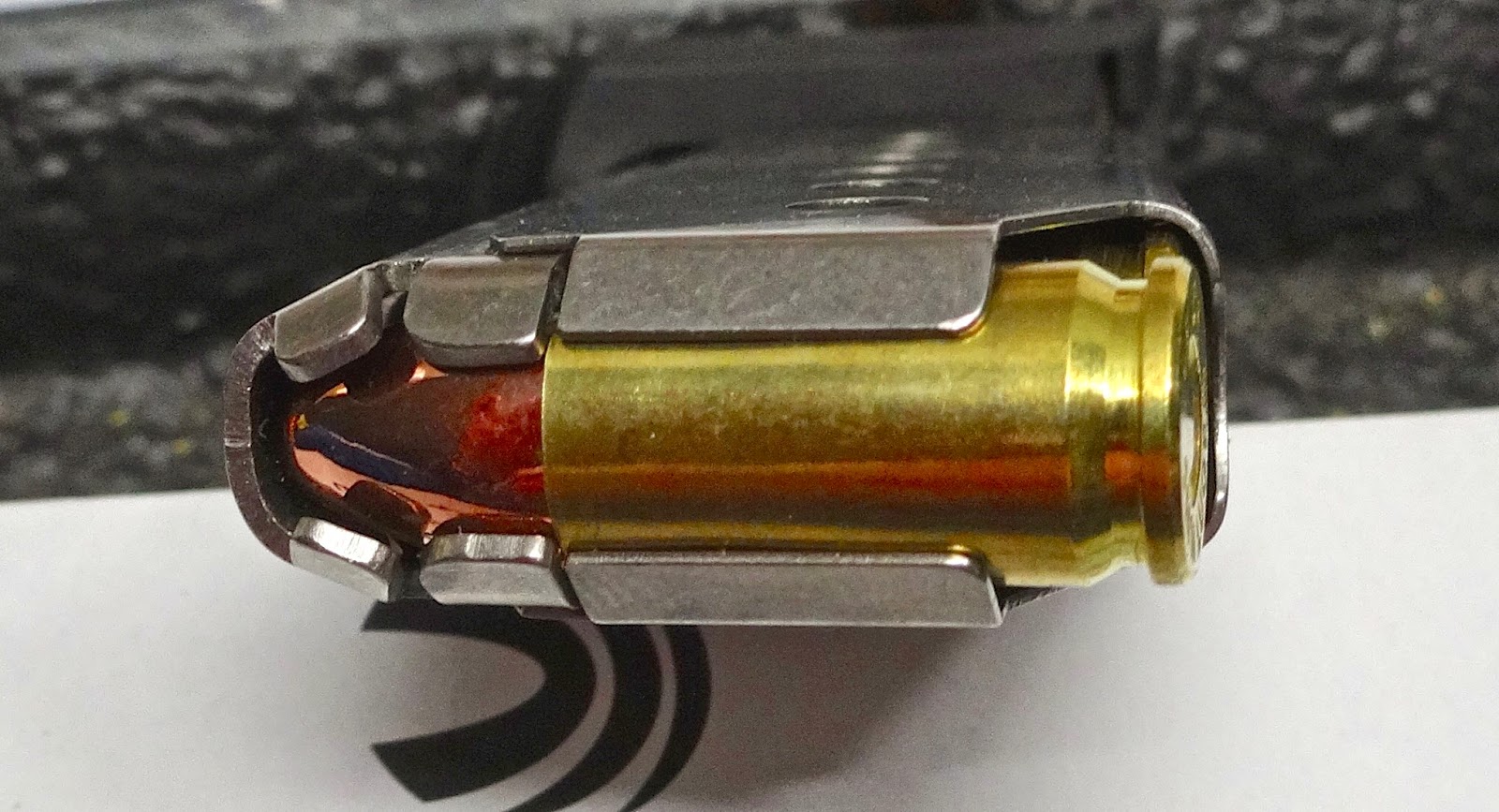 Another design element that helps keep the pistol compact is that the guide rod and recoil spring are small and mounted just to the left of the barrel rather than underneath the barrel as can be seen in the photo below. 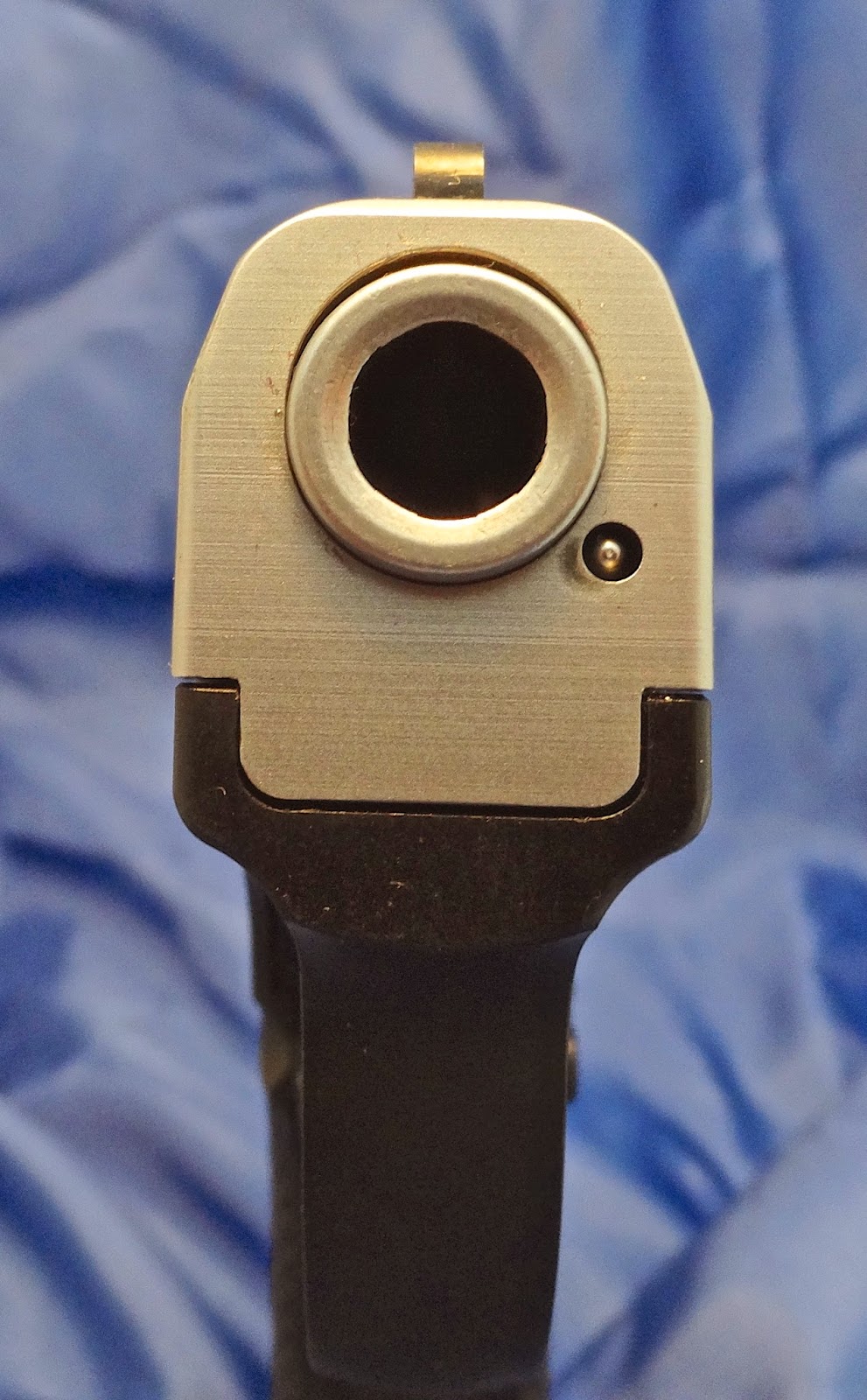 Below you can easily see where the guide rod and spring ride beside the barrel in this image showing a view of the slide when removed from the frame of the pistol.

Here are the rest of the specifications:

The engineering feats continue as Boberg has somehow managed to get 7 rounds into a very short magazine. 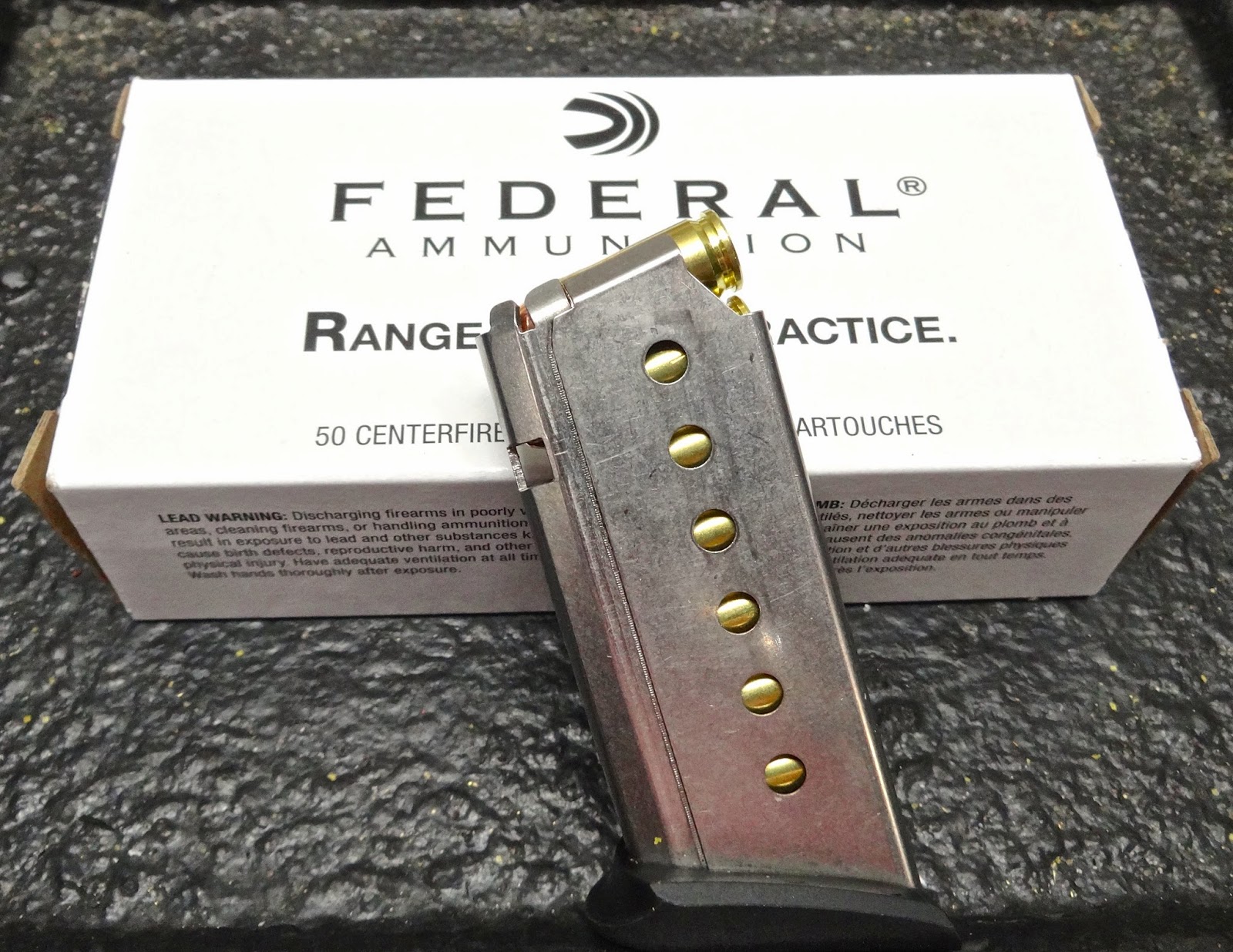 There is no magazine follower in the magazine.  Boberg makes one you can order but it does not come standard.  In my opinion the lack of a follower made no difference in the function and feeding of the pistol.

The sights on the Boberg are of the low profile 3 dot variety. 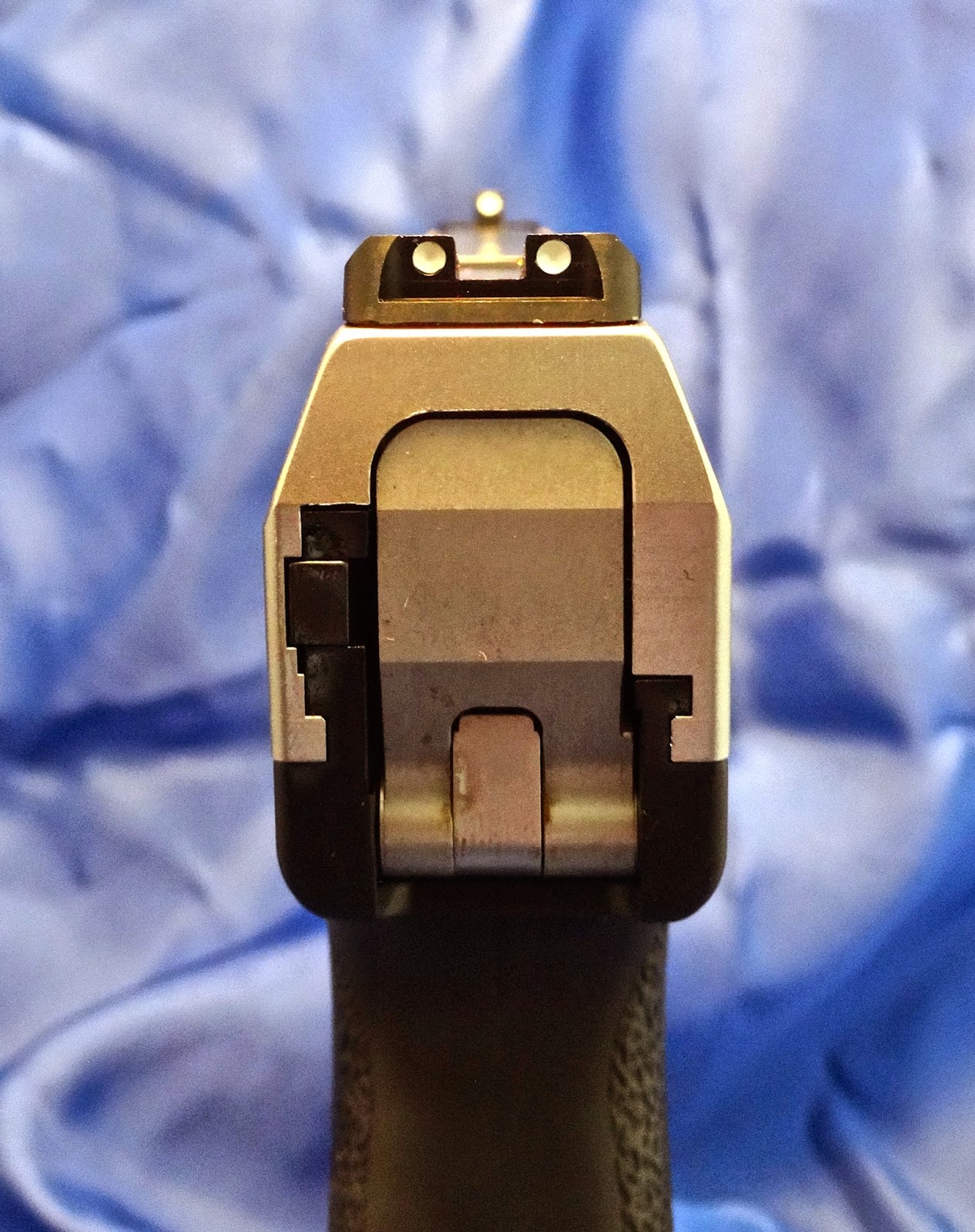 The sights are very easy to pick-up and the rear sight is dovetailed into the frame making it possible to drift  the rear sight for horizontal adjustments. 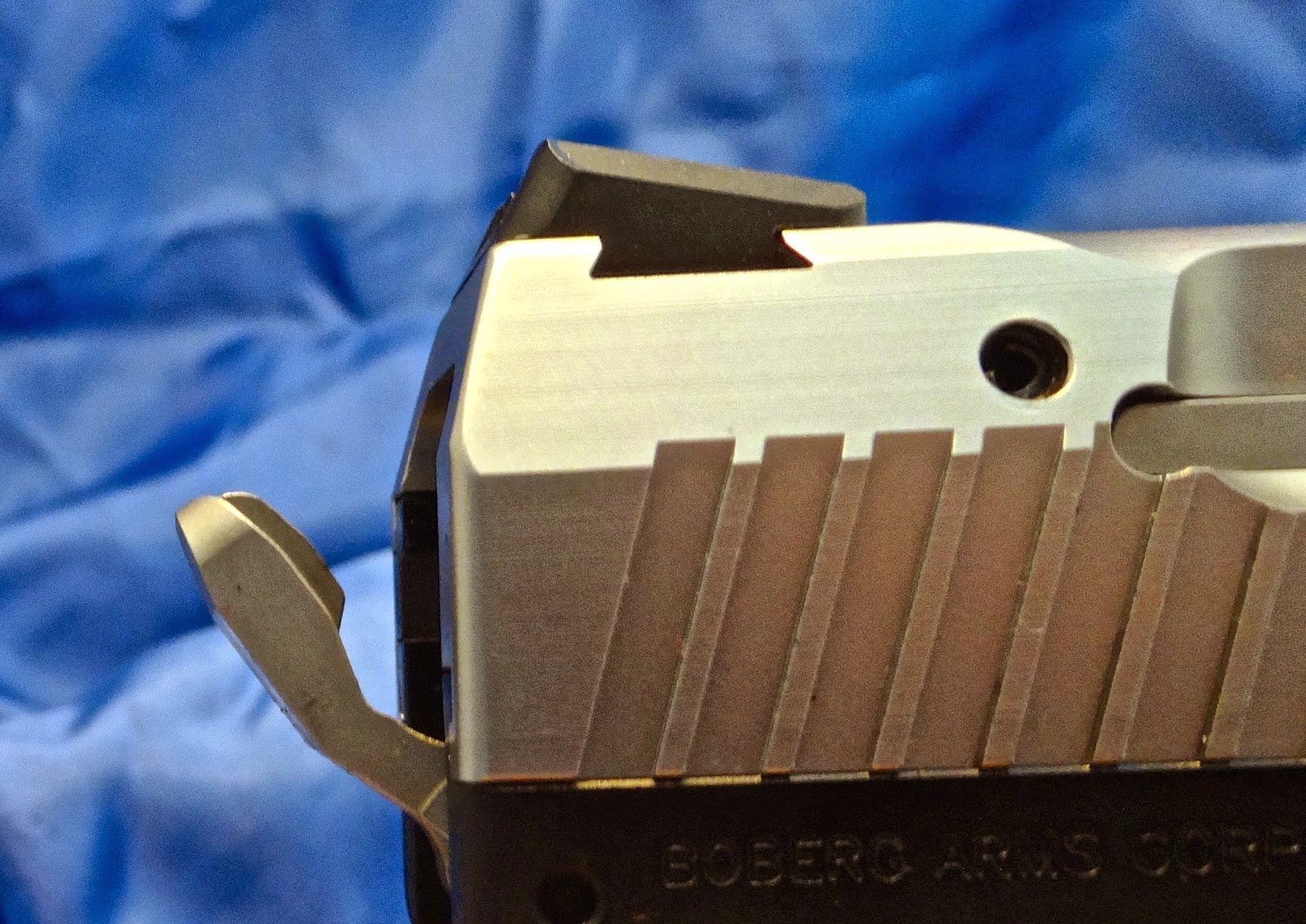 I should specify that it is Double Action Only (DAO) meaning that every pull is the same long but very manageable pull similar to a good revolver trigger pull.  The new XR9 that I examined had a trigger pull of over 12 pounds which is where my Lyman digital scale tops out.  The used pistol which I fired had a pull of 9.8 pounds so they definitely get lighter as they are properly broken in.

There are some ammo restrictions for the Boberg:
I'm going to increase #4 by saying to staying away from Federal ammunition all together.  The only 9mm ammo that the range had was Federal Range Target Practice (RTP) ammo and I'm going to show you what happens if you violate restrictions 2, 3 and 4.  The shell casings and bullets are held in place very firmly by the magazine lips.  If you are using aluminum cased ammo or non-crimped ammo like the Federal cartridges the cartridge claw extractor (circled in the second image below), when in motion as the slide retracts, will cause the bullet to separate from the casing resulting in the jam as shown in the third image below 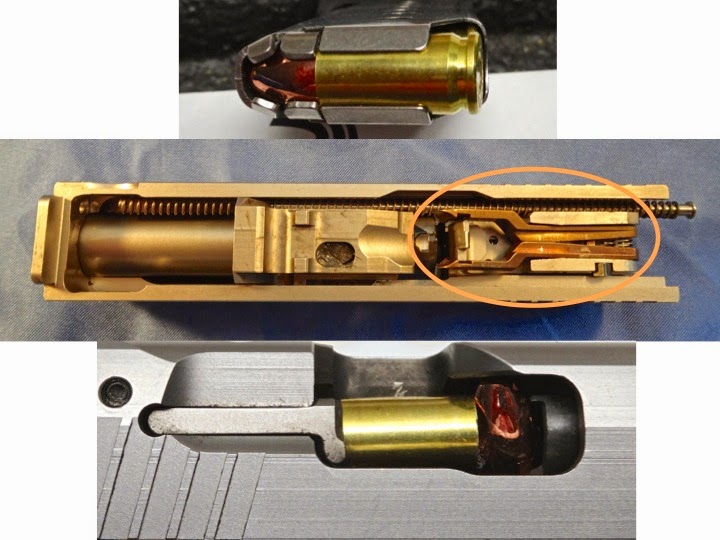 If you are into hand loading your ammunition you are in luck as you will wind up with some very clean components once you have cleared the jam.  10 out of 50 rounds of the Federal RTP ammo separated. 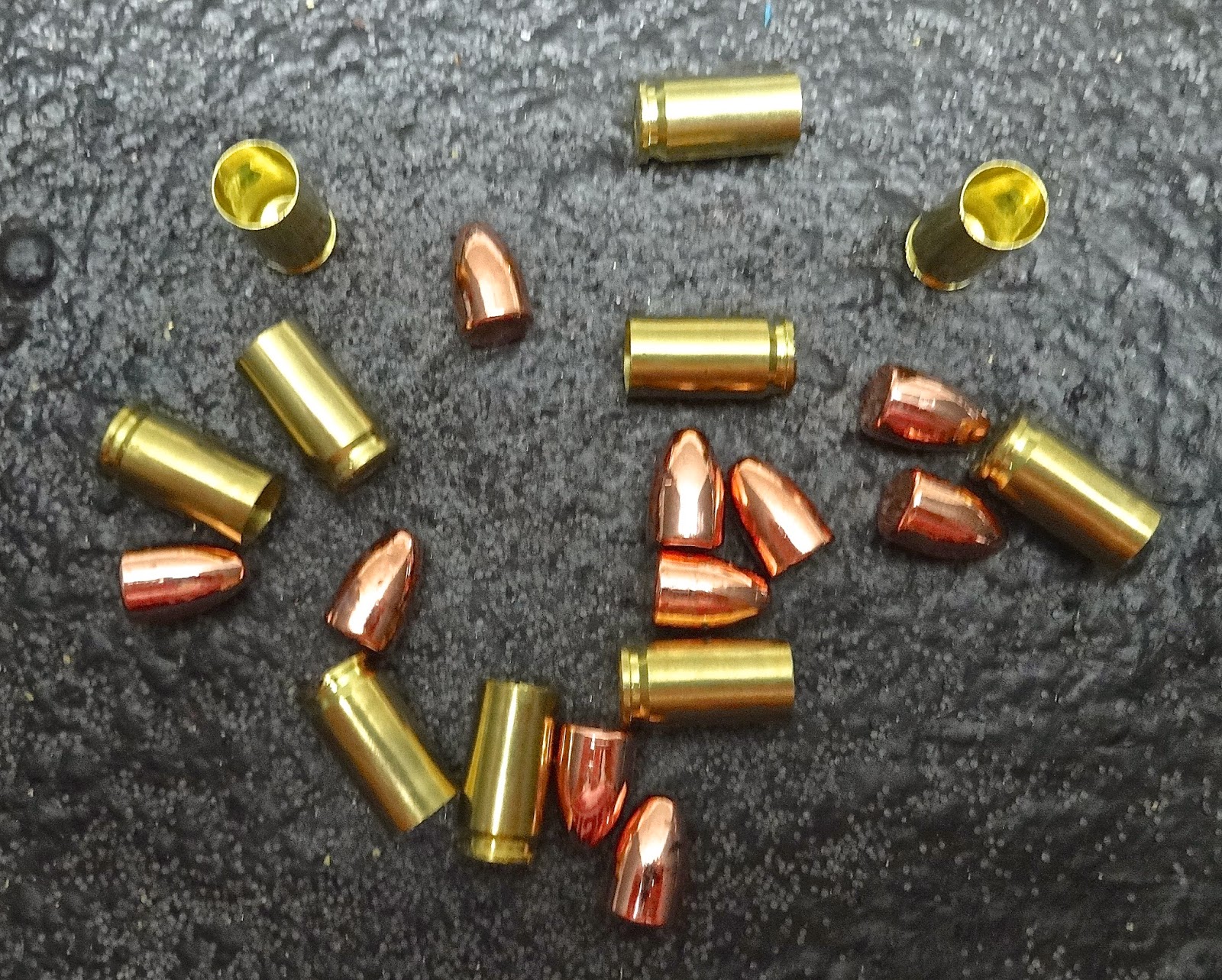 The basic message here is to make sure the ammo in the casings are properly crimped to the bullet. I had a small supply of Magtech 115 grain 9mm ammo and Winchester 147 grain hollow point ammo all of which functioned perfectly. 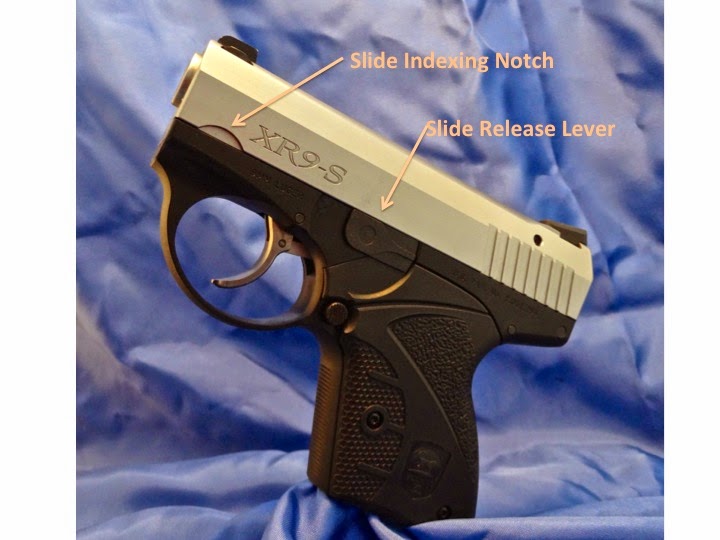 So, here's how she shoots:

The XR9 is not a target pistol it is designed for up close and personal self defense.  While I was working through the ammunition issue I fired 47 rounds of the Federal ammo at a three inch bullseye at 15 feet and was rewarded with a big gaping hole that went a little above the the bullseye. 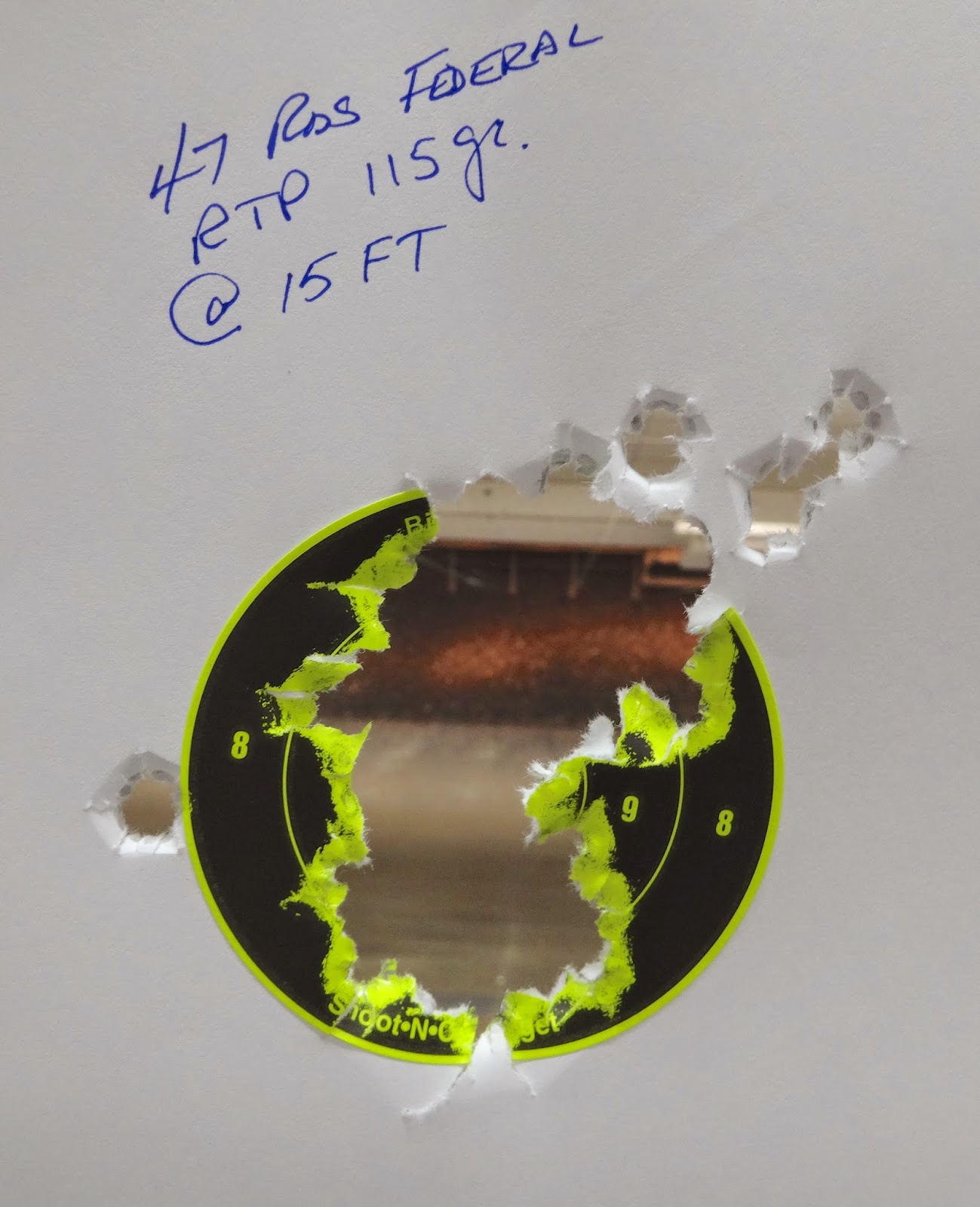 At 21 feet I fired 20 rounds of MagTech 115 grain FMJ ammo at an eight inch bullseye with more than enough accuracy for this pistol's intended purpose. 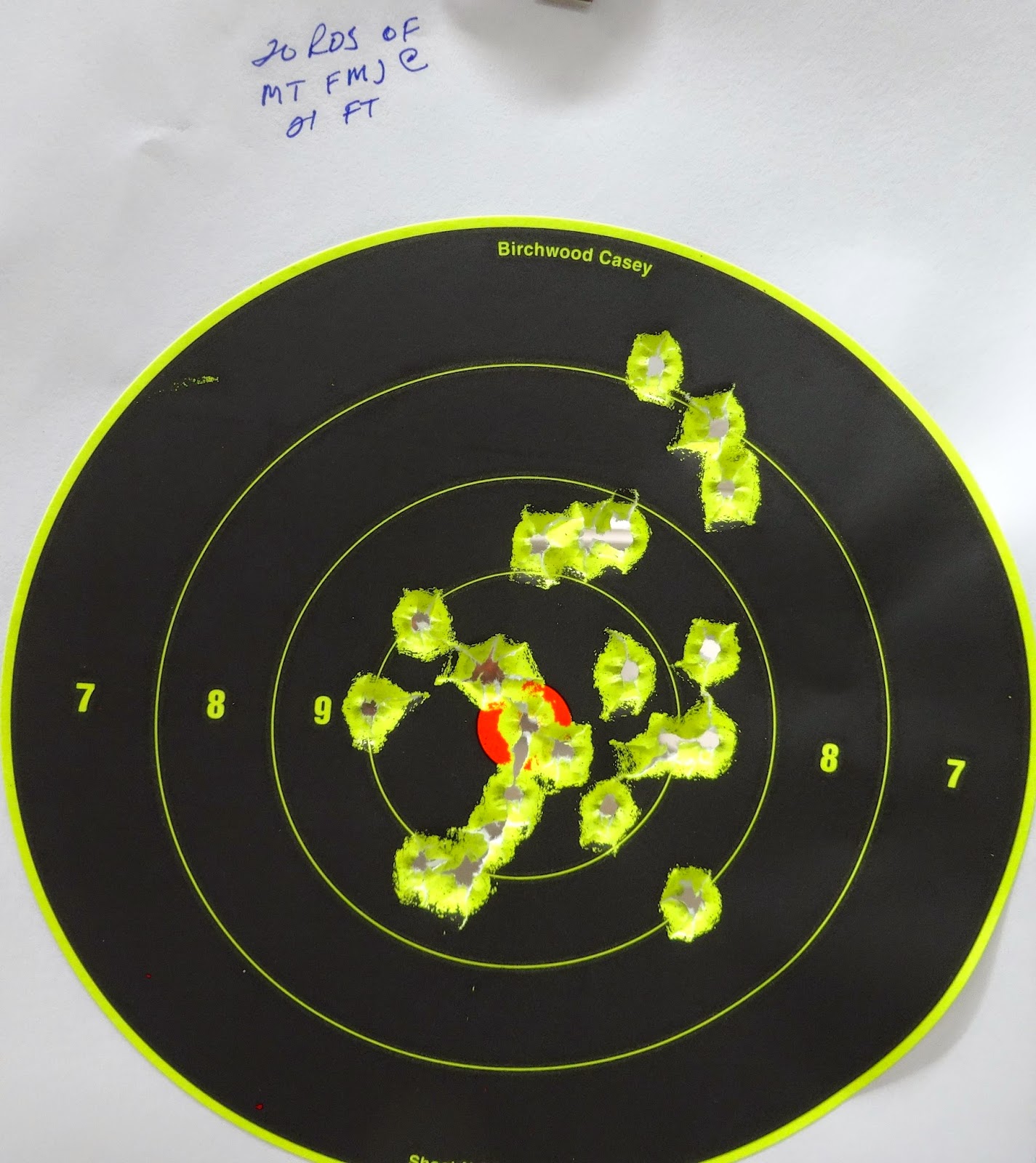 I then rolled a target out to 35 feet and fired the remaining 21 rounds of my MagTech ammo (I realized after I wrote Federal on the target that the ammo was actually Magtech). 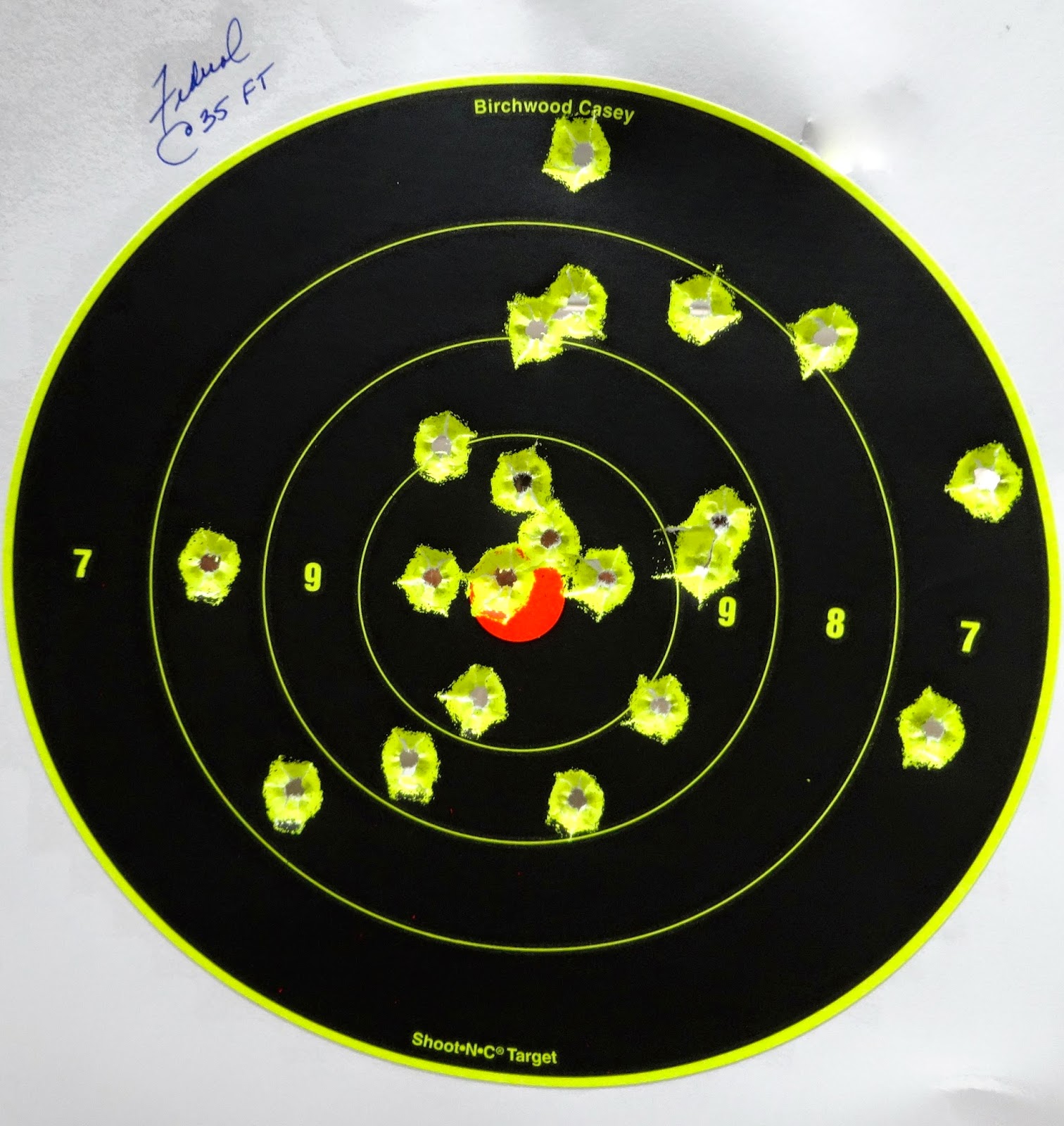 And lastly I fired 10 rounds of Winchester Train and Defend 147 grain jacketed hollow-point ammo at the three inch bullseye placed at 21 feet. 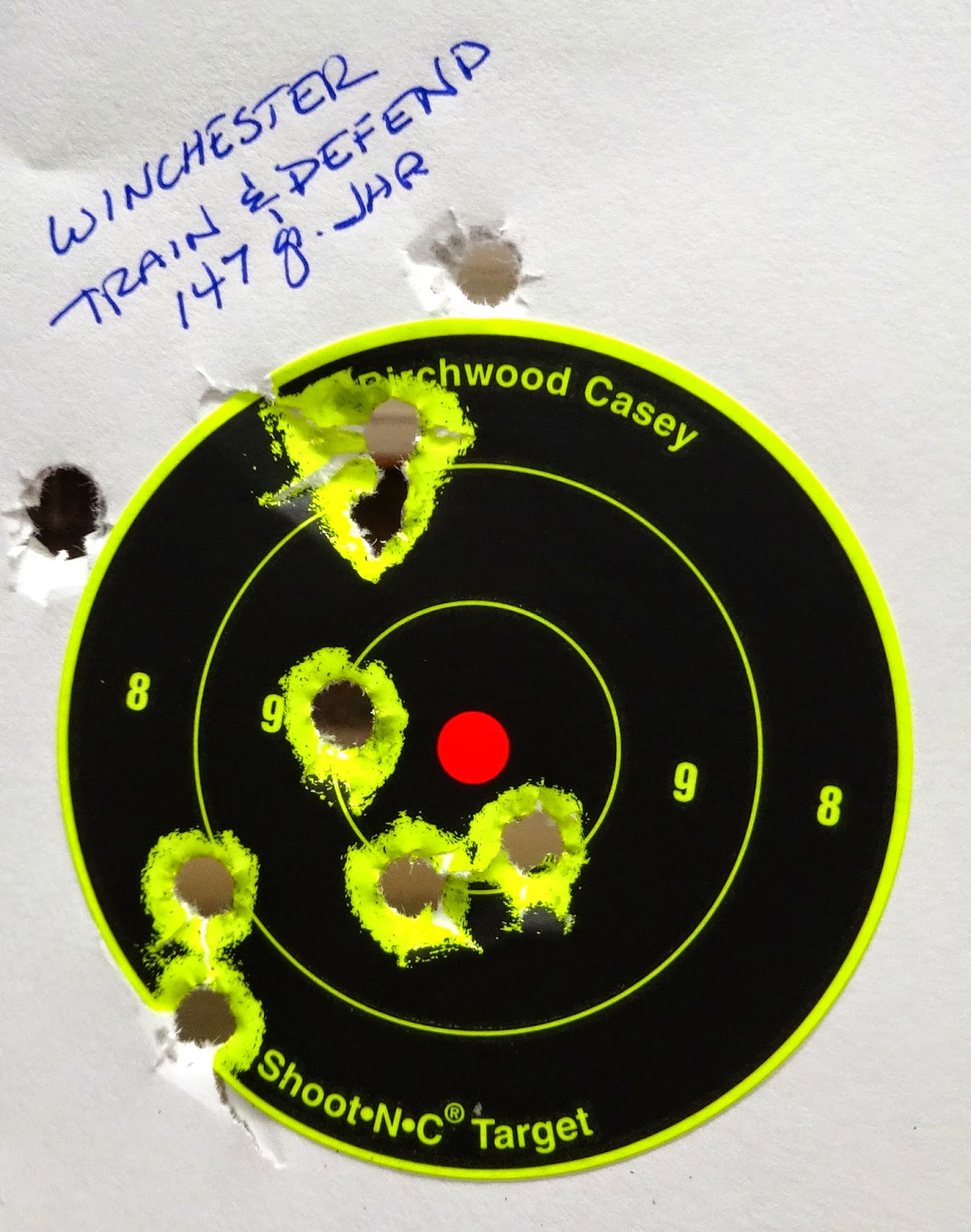 Making a 9mm micro pistol is not an easy feat.  Other manufacturers have tried and not been successful.  The Boberg snub-nosed semi-auto pistol works well if you feed it the proper ammunition.  Recoil is not a problem as the bore axis is low and the rear of the pistol extends backward over the web of your hand and this feature really makes the pistol feel like it is a further extension of your hand.  This is an easy pistol to conceal and is right at home in a pocket holster.  Boberg does make another variation with a 4.2 inch barrel which has an accessory rail for lights and lasers.  Also, in the very near future you can start looking for their new .45 ACP version!
Posted by Average Joe's Handgun Reviews at 12:34 AM

Any idea how much extra fps the extra Boberg barrel length gets you?

I see them all over the place between $900 and $1,100. Which is why I don't own one. Hopefully after they have paid for the R&D they did on the pistol the price will come down. They claim additional fps over a standard 3 inch barreled gun but I do not yet have the equipment to verify that claim. The do, however show some results on their website so you might check it out.

Hmm: Boberg claims a 17% increase in muzzle velocity over a Kimber Solo.

The website also claims the XR9-S can stand up to "...a steady diet of high-pressure +P ammo that most other micros can't hold up to.

I linked the gun thought I still prefer Kimber 1911 .45 ACP. It really smooth performer, Its a kinda my choice. Its tough yet stylish and within budget as well.

I own this pistol and I love it. It is picky with ammo, but so is the Seecamp, and I love that pistol also. But once you find the right ammo to shoot it’s very reliable. This pistol gives you a compact to a full-size pistol ballistics in a “sub” subcompact design [it’s smaller than the Beretta Nano, Kahr CM9, etc]. It’s also a softer shooter than any sub compact I have ever shot in that 5” overall length range. And the build quality is just amazing, with a very solid high quality feel, with no sharp corners anywhere. While the price of the gun is high, you are getting something for your money in higher velocity, lighter recoil, and easier to conceal.