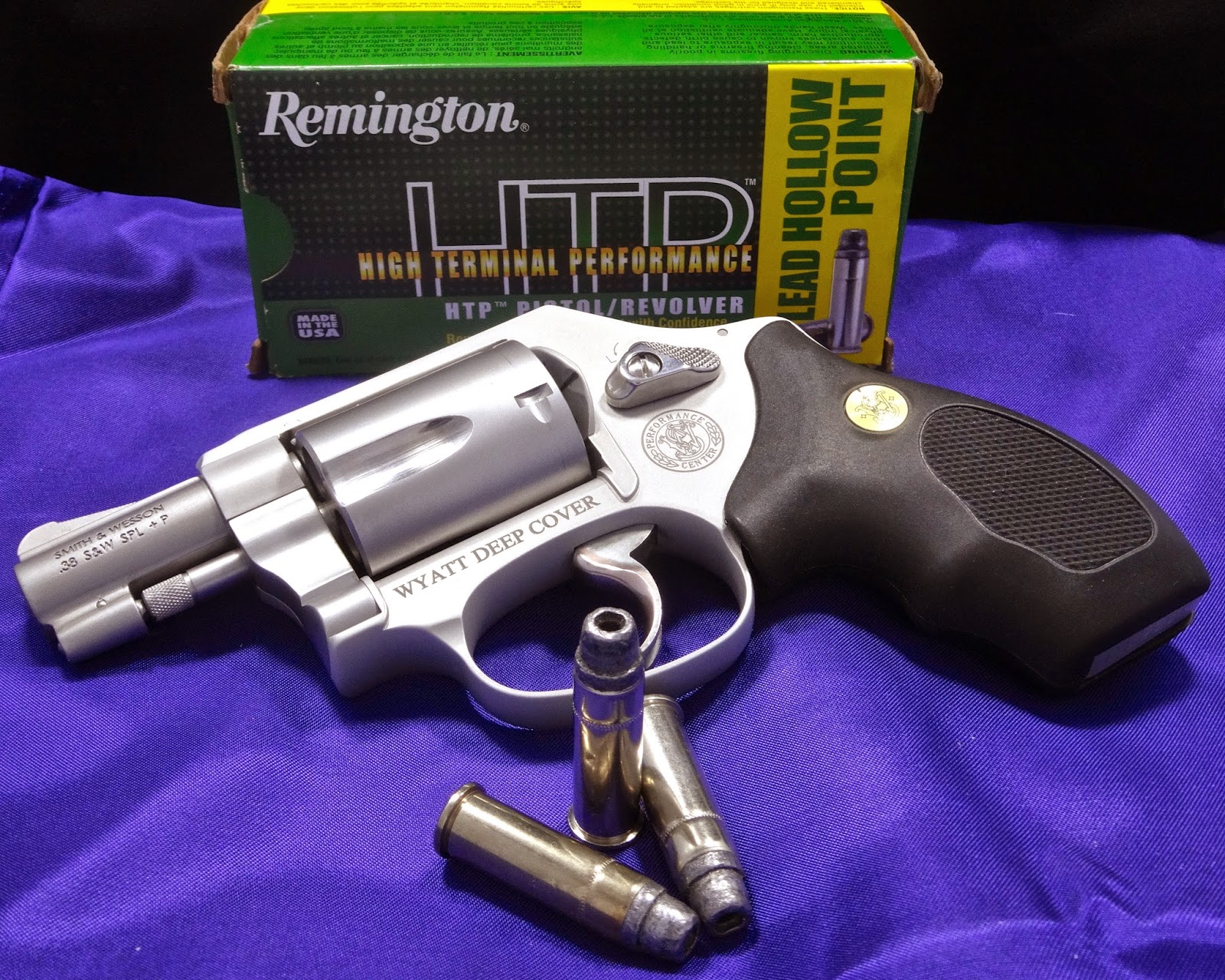 The lure of the little revolver bites again!  Like an addict who can't stay on the wagon I, yet again, fell prey to the temptation of the "J" framed lightweight revolver.

The Wyatt Deep Cover Model 637 originated Rich Wyatt, the owner and operator of Gunsmoke firearms in Colorado.  Wyatt, his family and company were the subject of the reality show for several years called "American Guns".  But Gunsmoke was more than just a retail shop, they also employed several gunsmiths.  One of the specialities they turned out was the "Wyatt Deep Cover", which was a customized Smith & Wesson model 637.

Last year Smith & Wesson made the "Wyatt Deep Cover" a Performance Center production to bring this custom revolver to a wider audience. 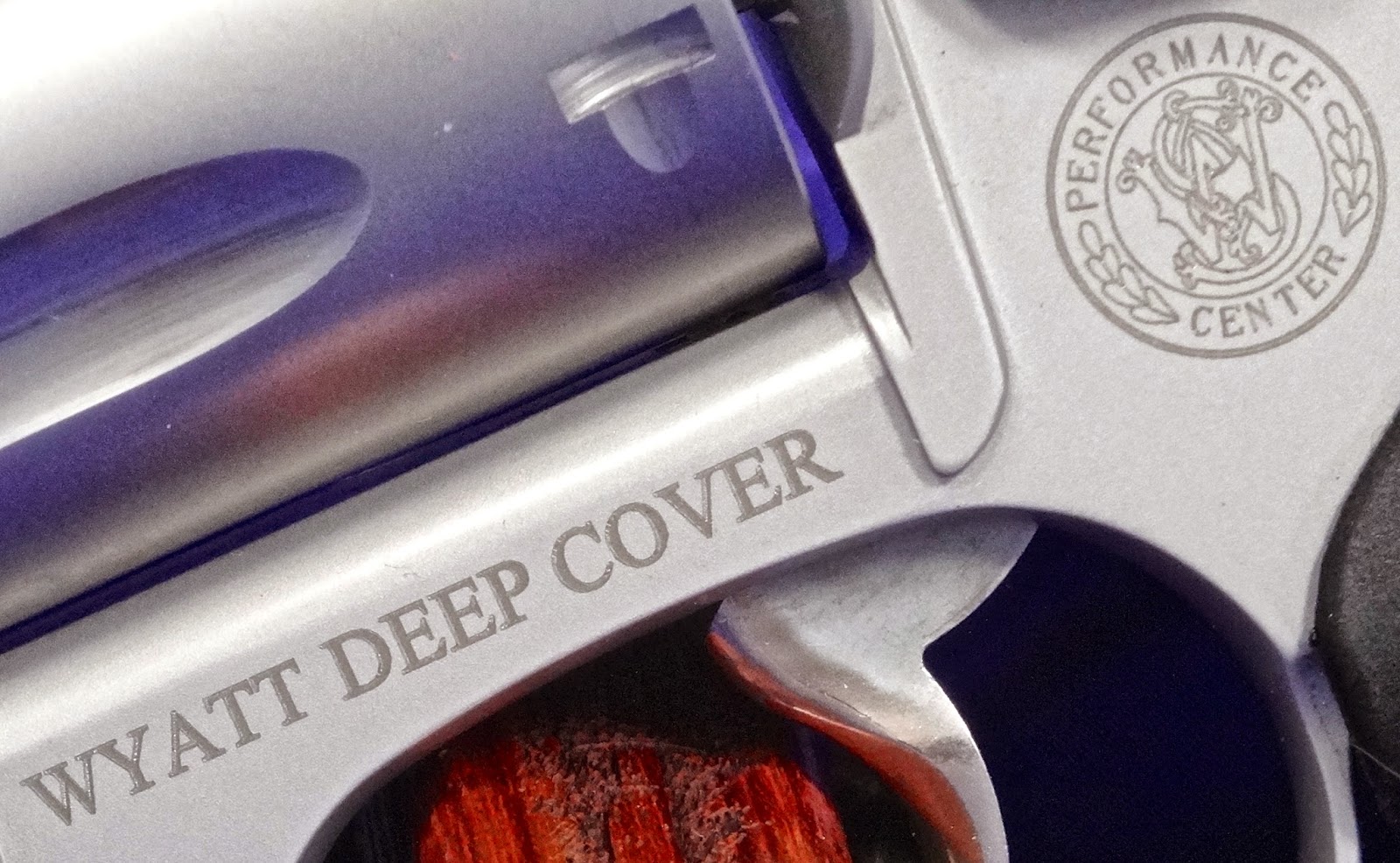 Here are the official specifications from the Smith & Wesson website: 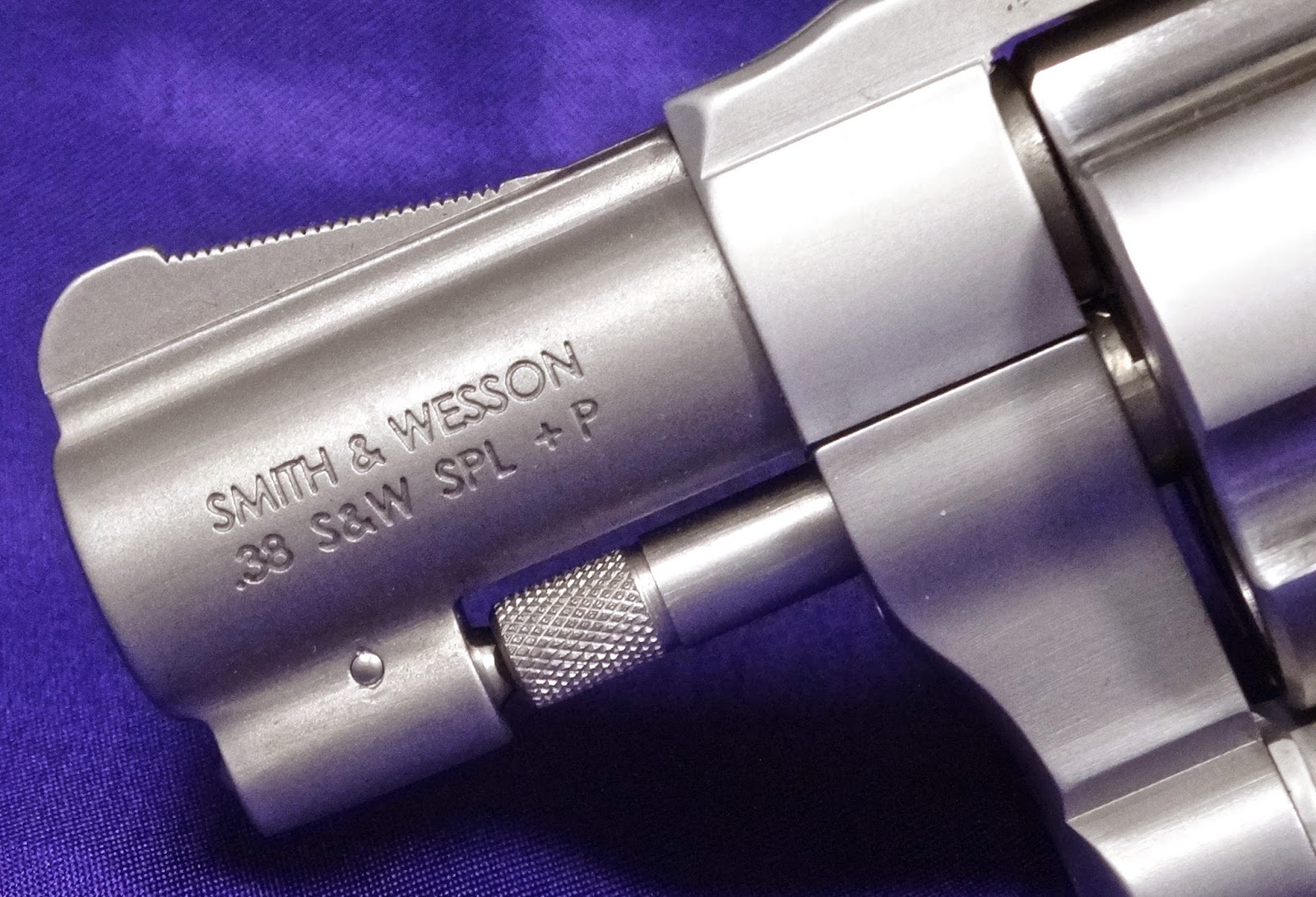 In addition to the stated specs you also get some extras such as: 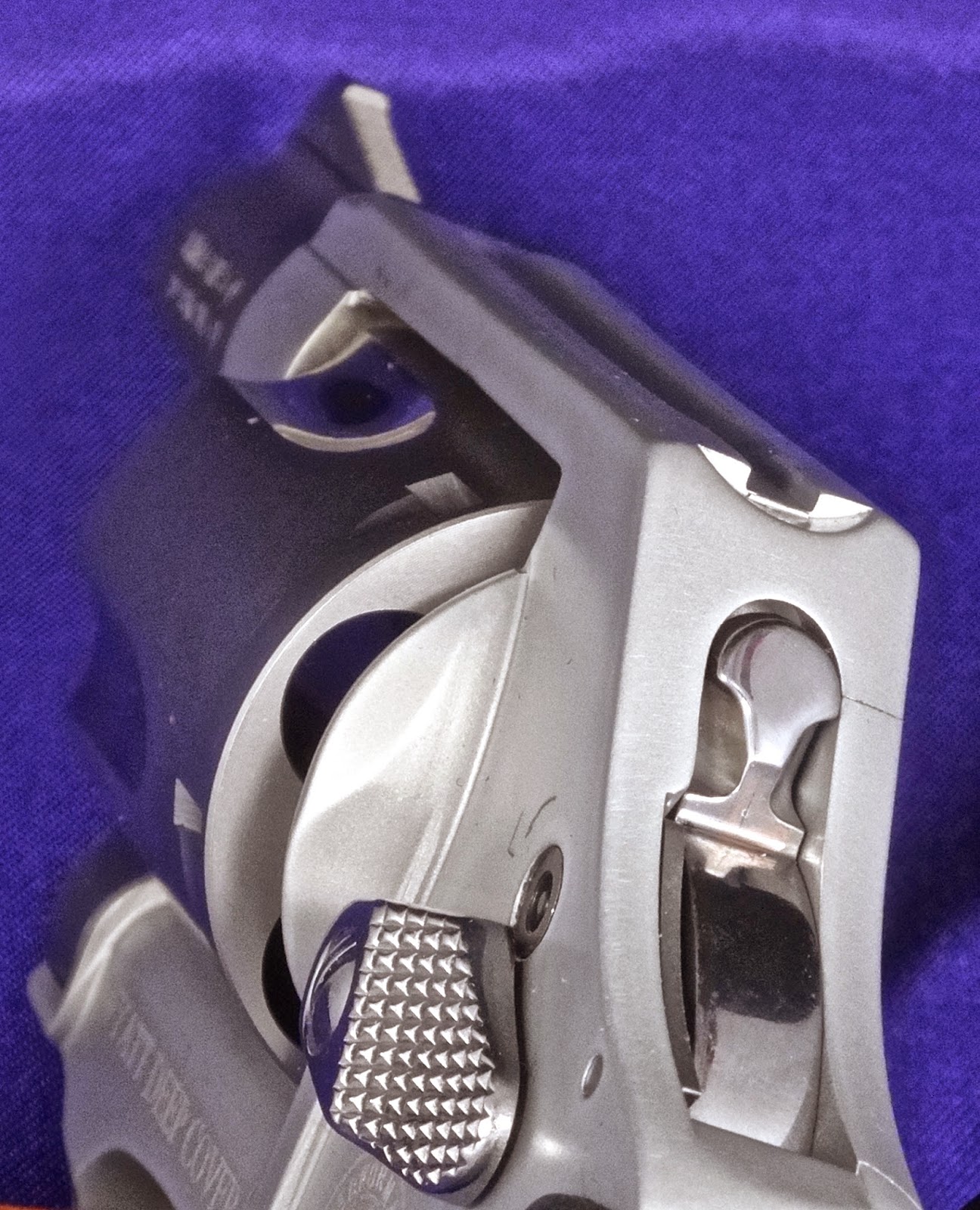 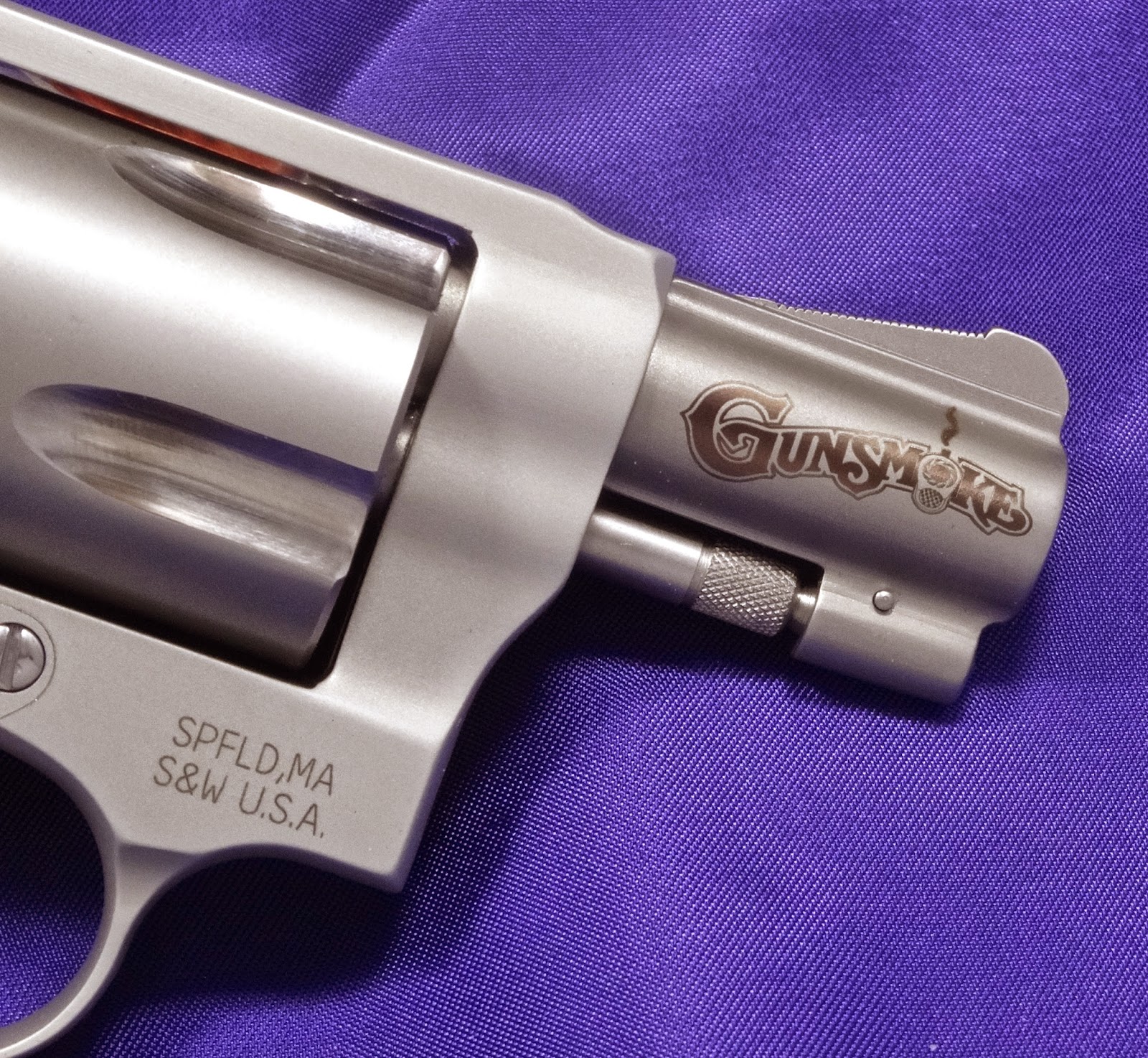 along with polished cylinder flutes, a polished and radiused trigger and a Performance Center Trigger job.

The revolver also comes standard with a set of polymer clip grips that appear to the from DeSantis. 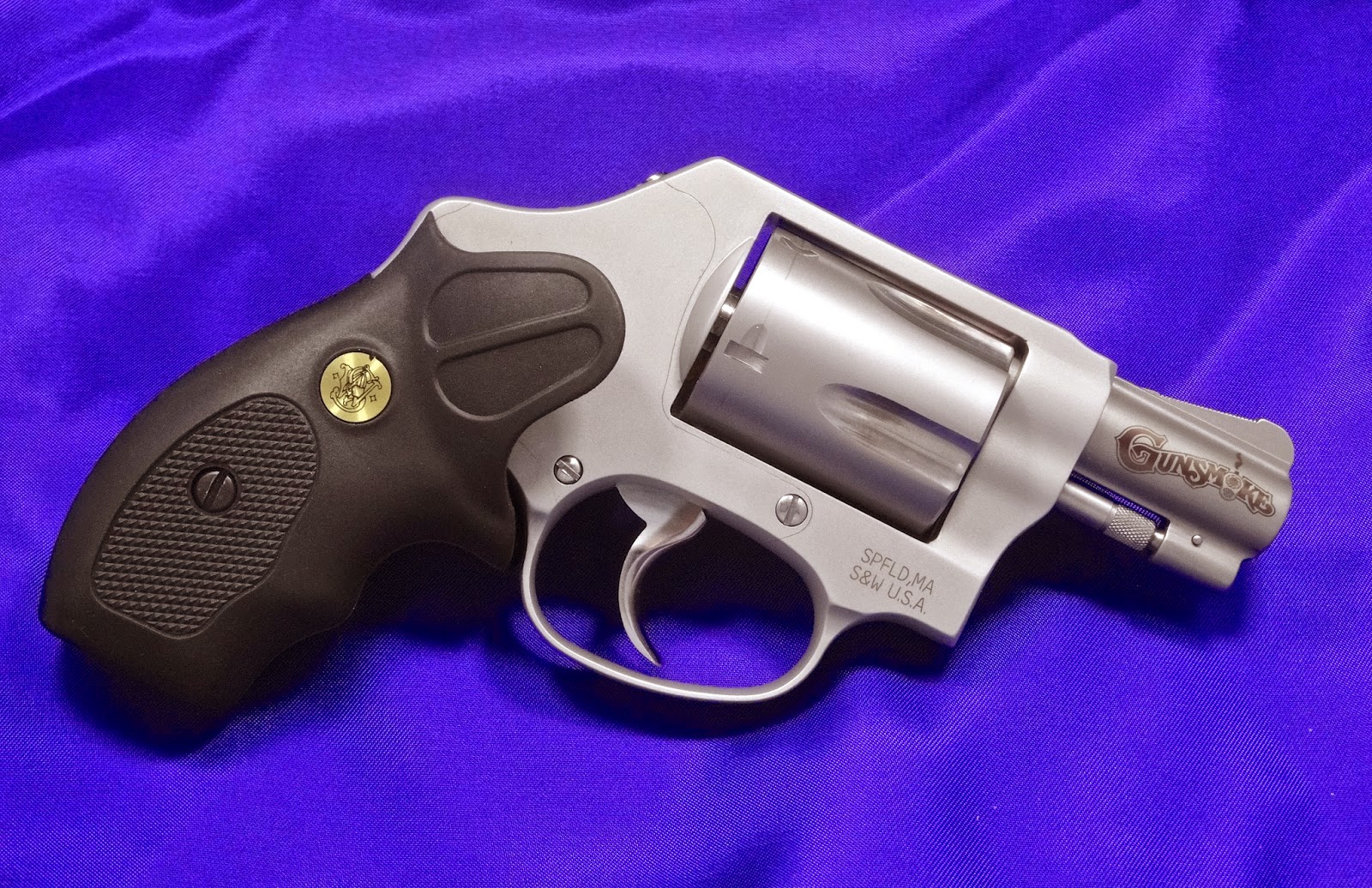 The light weight of the 637 and clip grip make this an easy revolver to carry.  But there is an additional benefit of the clip grip that may not have been intended. 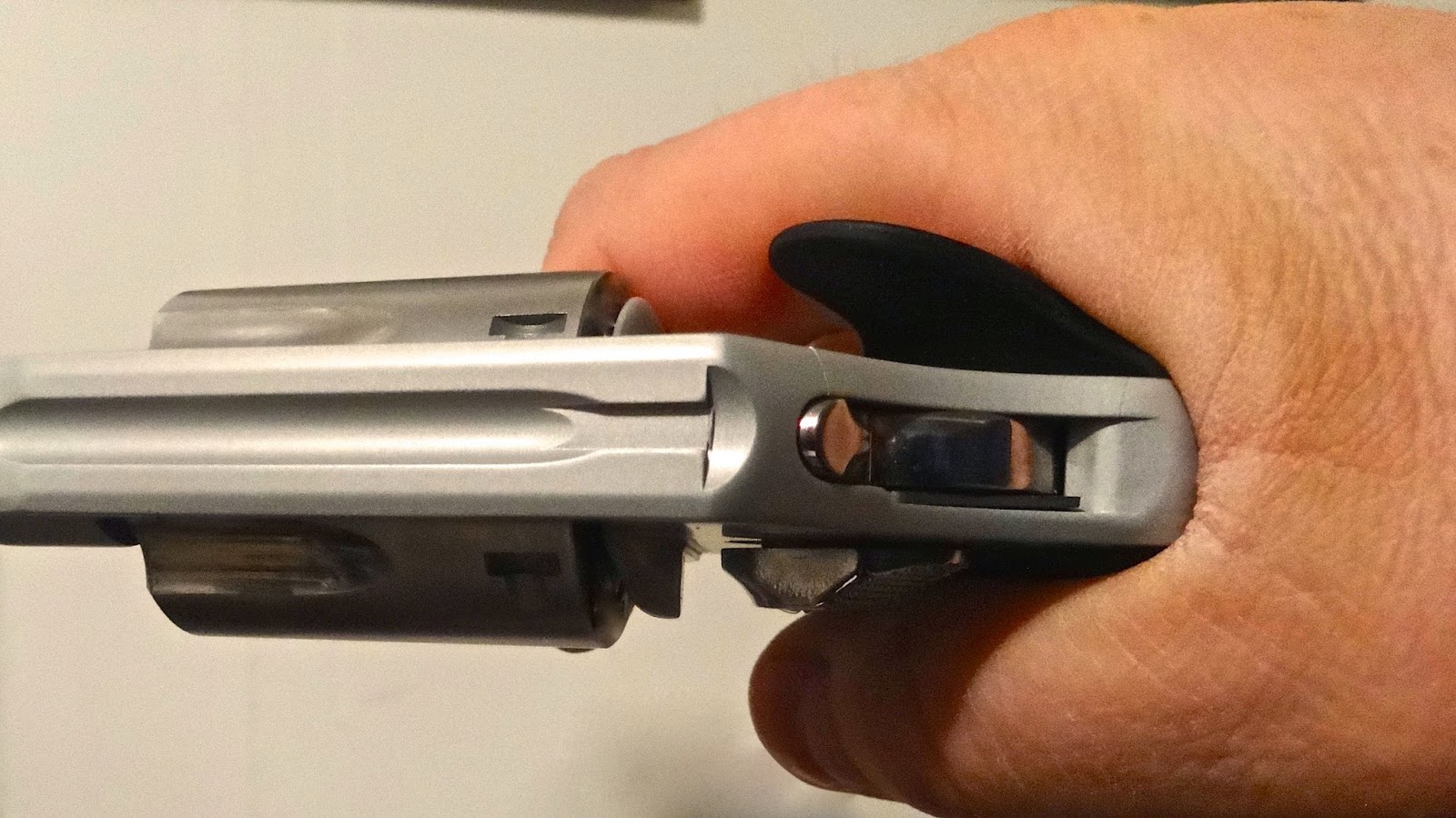 The extra width of the molded clip pushed the index finger out so that the finger fell exactly on the trigger where it needed to be for accurate double-action firing.

Unaltered "J" frame trigger pulls run up to 15 pounds with most in the 12 to 13 pound arena.  The Performance Center gunsmiths turned out this example with a 10.8 pound and very smooth trigger pull.

So how did the Wyatt Deep Cover 637 Perform?  Let's look at the targets: 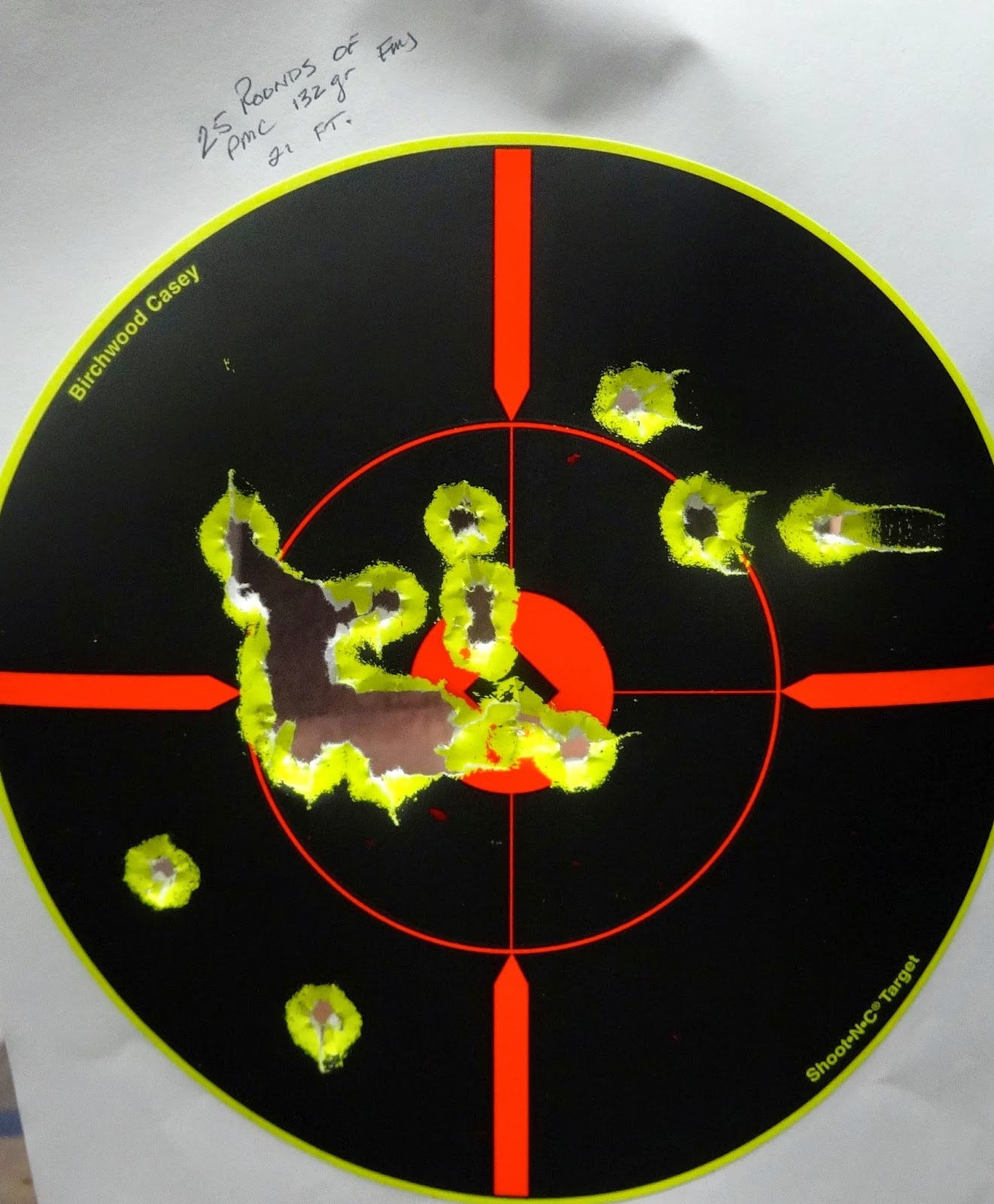 The above target was shot at 21 feet with PMC 132 grain FMJ ammunition. 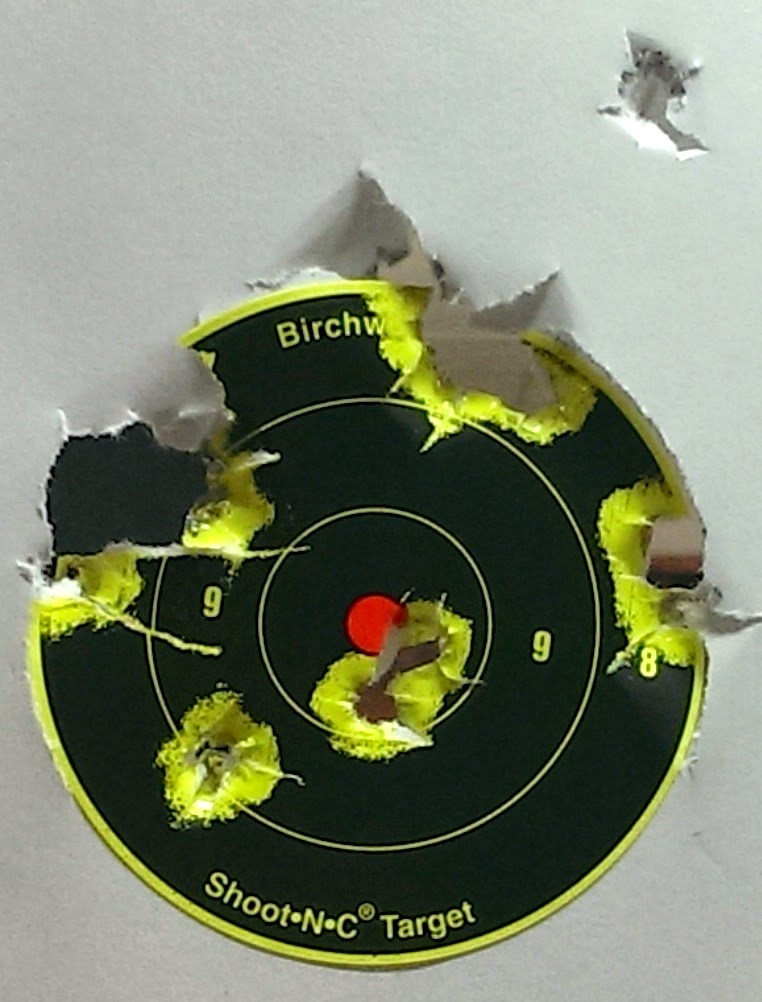 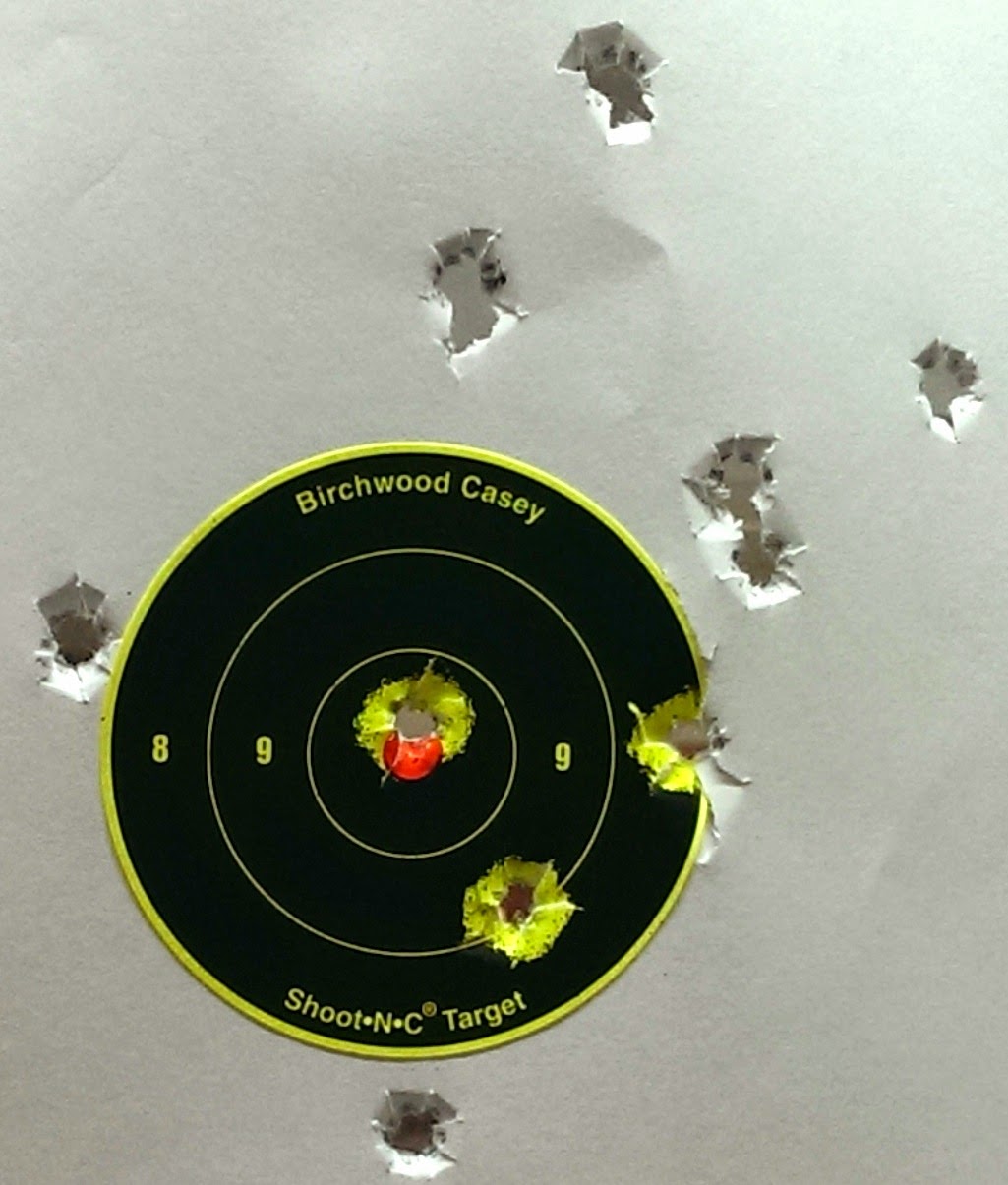 At 30 feet the group opened up.  It would still be an effective group at the same range on a torso but I am starting to lose control over the revolver's performance at this range.

The next three targets were all shot at 21 feet using various brands of defensive ammo: 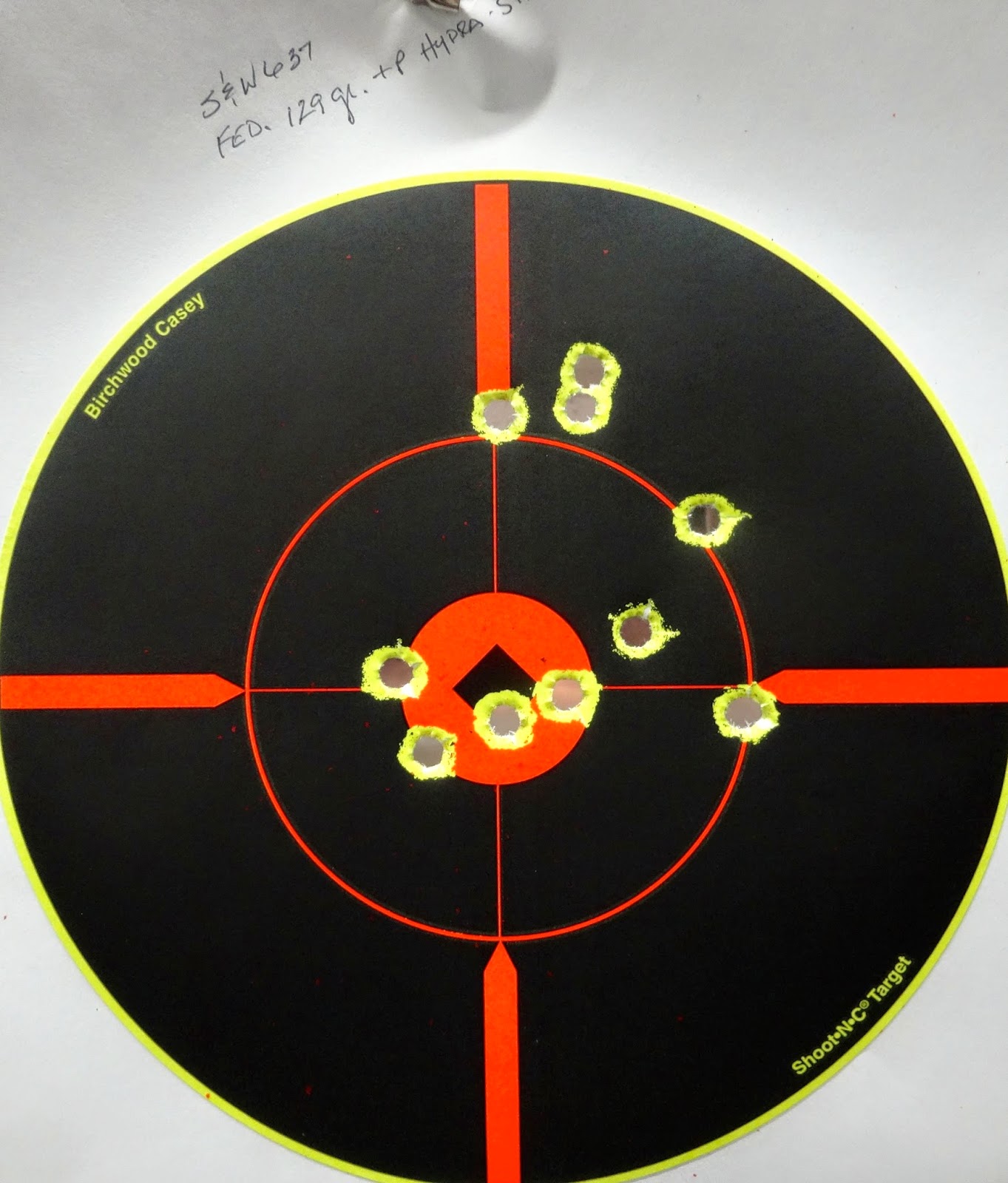 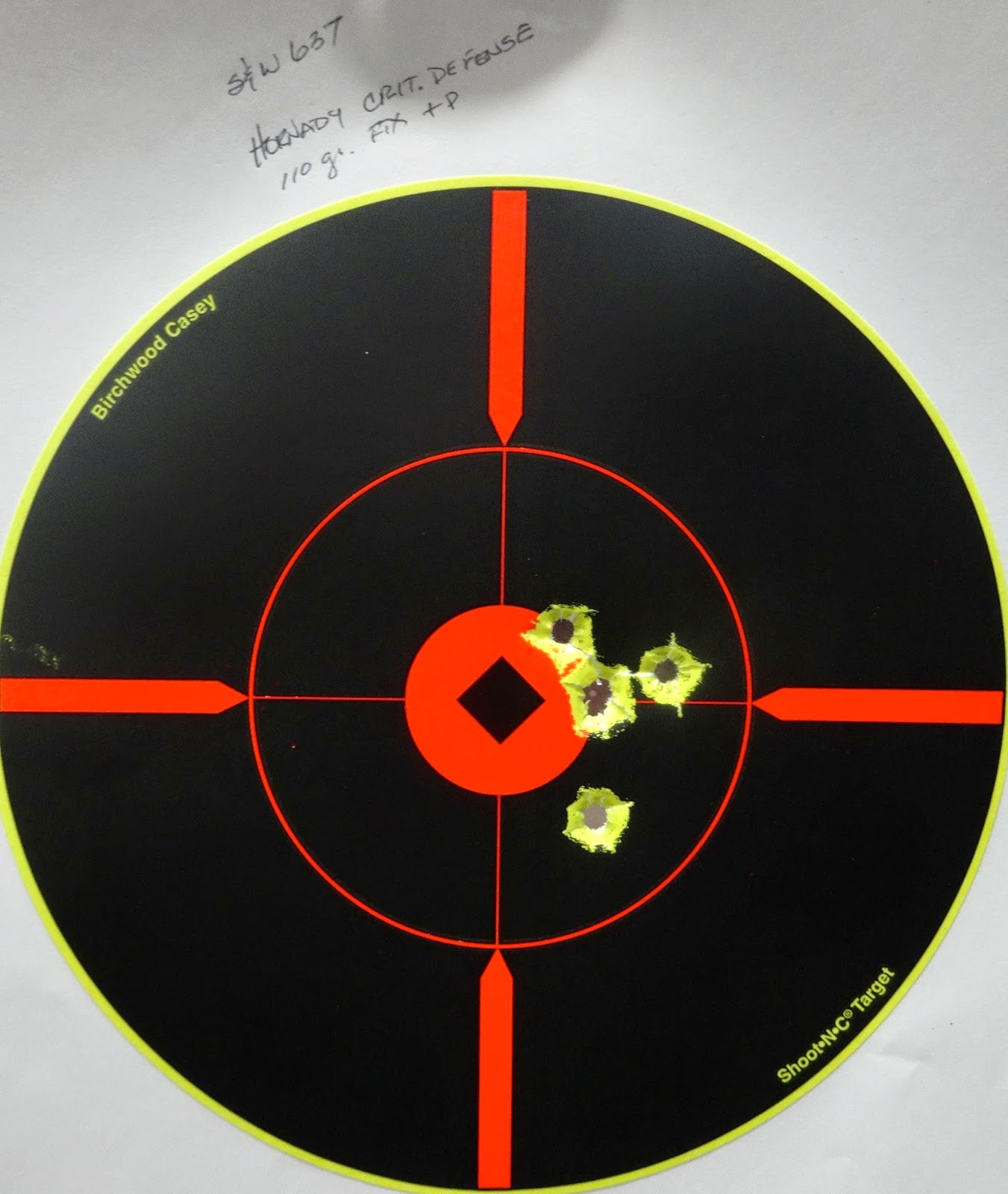 The above target was hit with 5 rounds of Hornady Critical Defense 110 grain FTX +P ammo. 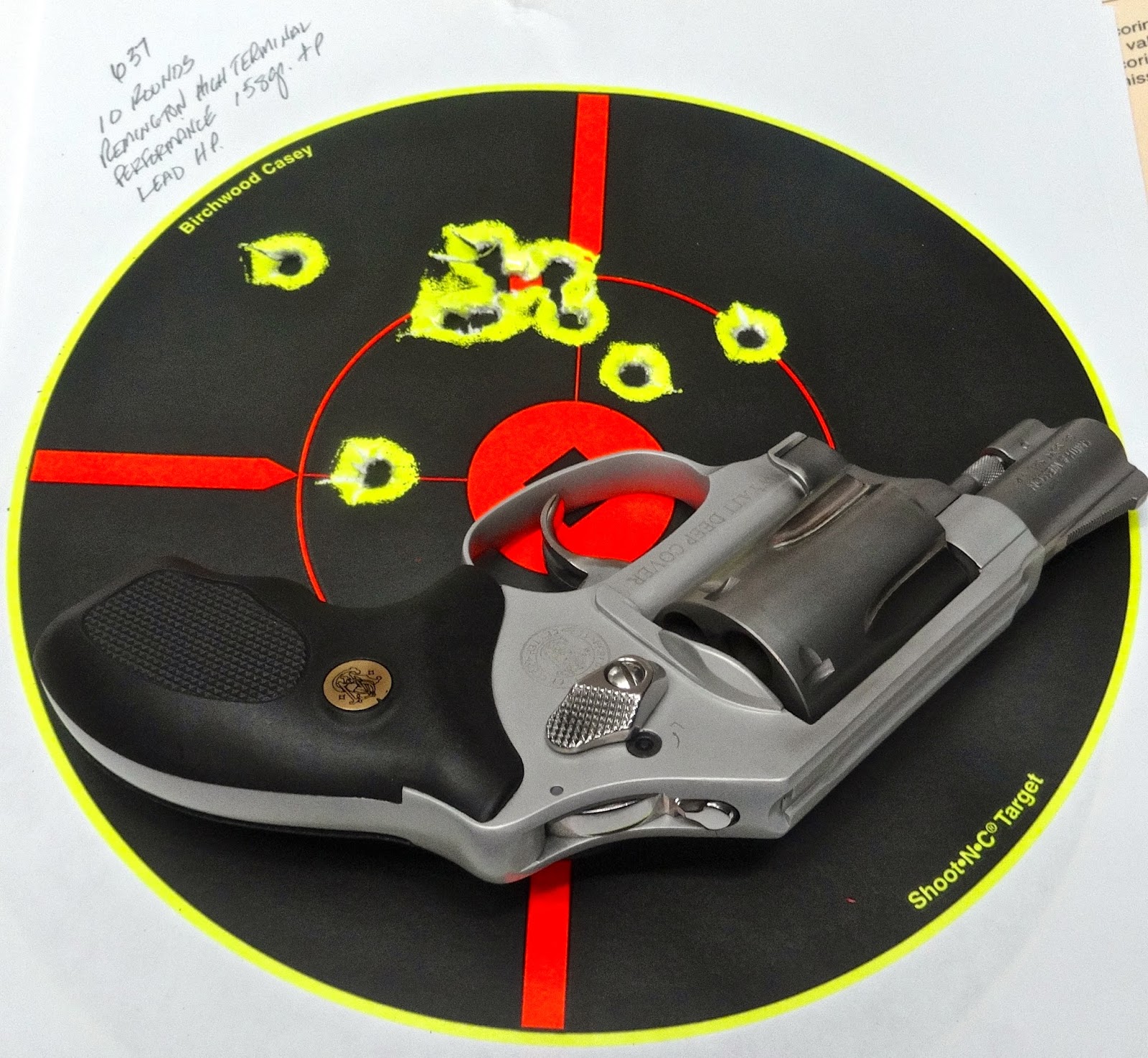 Now for the Bad News

It was extremely painful to shoot this revolver.  The trigger guard busted the knuckle on my right hand and the grip frame mercilessly pounded the web of my hand.  The clip grips are made of a hard polymer and do not cover the backstrap so the web of your hand takes a beating.

I looked for solutions and I hoped that I had found one with the Ergo grip. 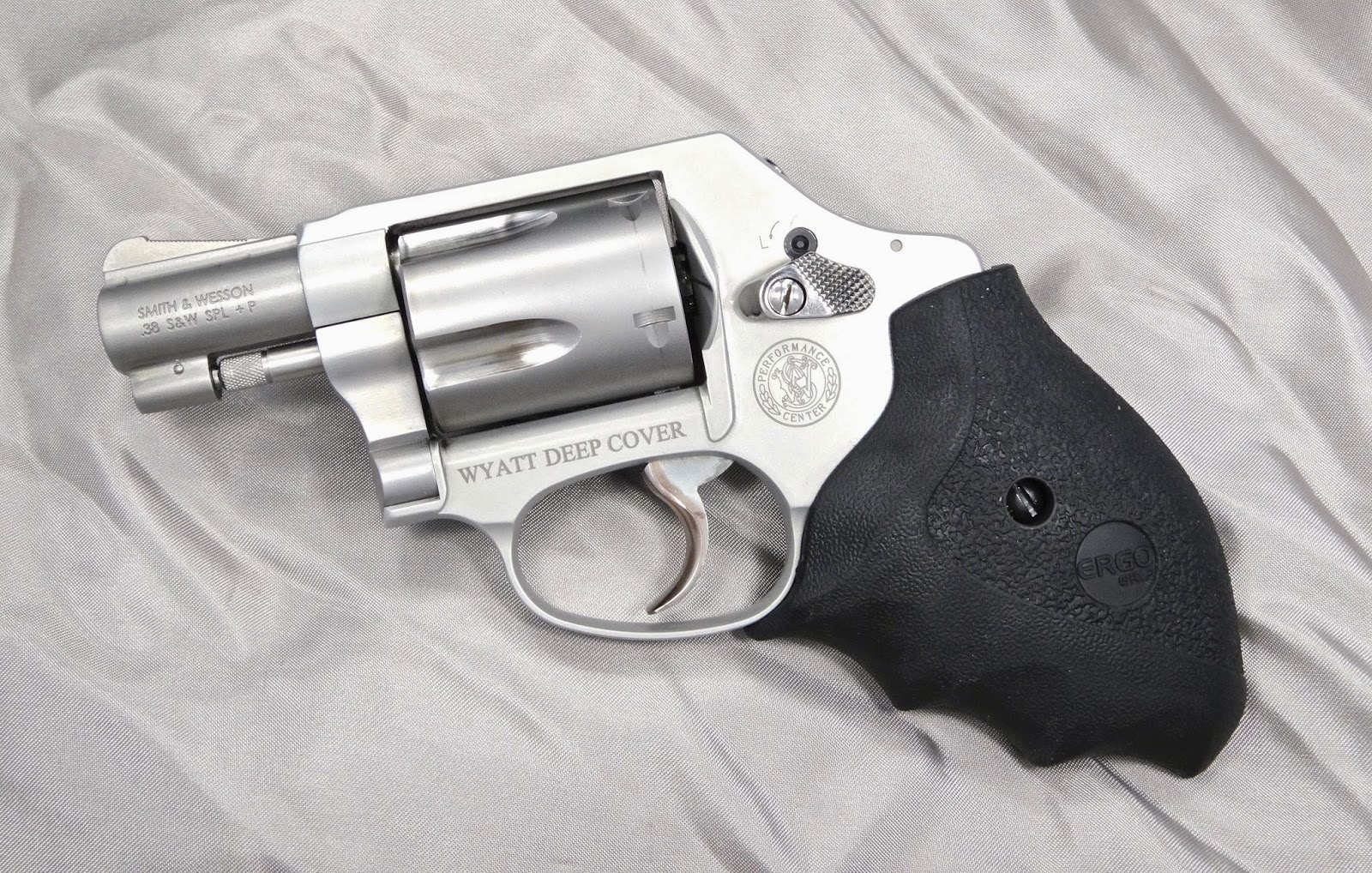 The Ergo grip looks a little strange, OK it looks very strange.  But the design does have some basis in the ergonomics of the hand.

When you close your hand and make like you are gripping an imaginary handgun you will note that your fingers close at an angle, not a straight line.  Ergo is one of the few companies to build grips with these ergonomic angles in mind.  Did it help?  Well, yes and no.  It did completely mitigate the knuckle busting of the middle finger so they get a gold star for solving that problem.  However, while the Ergo grip covers the backstrap it is very narrow.  I knew as soon as I installed the grips and wrapped my hand around them that the web of my hand was about to experience even more pain when I used these grips and unfortunately, I was right.

All of this contributed to painful shooting sessions and worsening shot placement.  The targets seen above were all shot on the first and second trip out with the 637.  Targets shot on subsequent trips got progressively worse due to the pain of shooting this revolver.  At the sixth session with the Ergo grips installed I was only able to shoot 15 rounds before the pain was unbearable and the shot placement was lousy.  A byproduct of the aging process for the shooter is worsening eyesight and higher recoil sensitivity.  10 years ago I owned a Scandium framed Smith & Wesson J frame revolver with a Titanium cylinder.  Once a week I would run a 50 round box of .357 Magnum through it with none of the outrageous pain that I now feel when firing a lightweight pistol with .38 Special rounds.  Alas, the Performance Center 637 Wyatt Deep Cover had to go.  This bugged me quite a bit.  This was a very handsome revolver and I really liked the clip grip feature.  But all was not lost.  After my experience with the 637 and the Gemini Customs Ruger SP101 I learned what I really needed in a small revolver and that, dear readers, will be a subject for a future article.
Posted by Average Joe's Handgun Reviews at 10:15 AM

Forget the fancy (and expensive) upgrades and oddball grips. Get a base 442/642, have a good gunsmith slick up the action (DO NOT try to make the trigger pull lighter, just smoother), put some Pachmayr Compacs or Hogue Monogrips on it, paint the front sight orange with Testors model paint and practice, practice, practice. The gun can be made to fit your hand and be shot comfortably and reasonably accurately with the hottest of the +P stuff. There's a reason the J-frame is so popular as a close range pocket pistol--it works great for most people who are willing to put forth the effort.

I have a stock 642 with a nice trigger job done by my freind Ken Figone at Diablo Valley Gunshop in California. It is smooth and, as is my prefference, stacks just before let-off. While shooting a steady diet of +P 158 gr LSWHP ammor is not pleasant, it is bearable and I prectice with 158gr LSWC ammo, which comes close to the point of aim/point of impact of the hotter +P stuff.

If I could design a better grip that gave me more cushion over the backstrap, I think it would be a more pleasant gun to shoot. However, as with 4-bore shotguns and .600 Nitro Express elephant rifles, one doesn't make a habit of plinking with them for fun. A few rounds to confirm POA/POI and wait for the right moment. In the case of the 642, of course, you hope it won't come.

This is my primay carry gun and was by back-up when I was a LEO back in the last century.

I had just bought a ruger lcp 380 two prior to finding a wyatt deep cover in the same lgs I had purchased the lil ruger from.I liked the ruger lcp fine but why meddle in mediocrity.my wyatt deep cover is a great gun on me 24/7 carry buffalo bore lswchp+p and 2 speed strip of buffalo bore heavy 38spcl.outdorrsman.now just from my experiences with it it is p.o.a./p.o.i. with the +p 158,s at 10yds.and it has no trouble dropping very adrenaline angry wild hogs in the trap.one hit to the head be it in the ear or head on and down they go I'll bet it would do fine against any methhead/bath salts assailant.