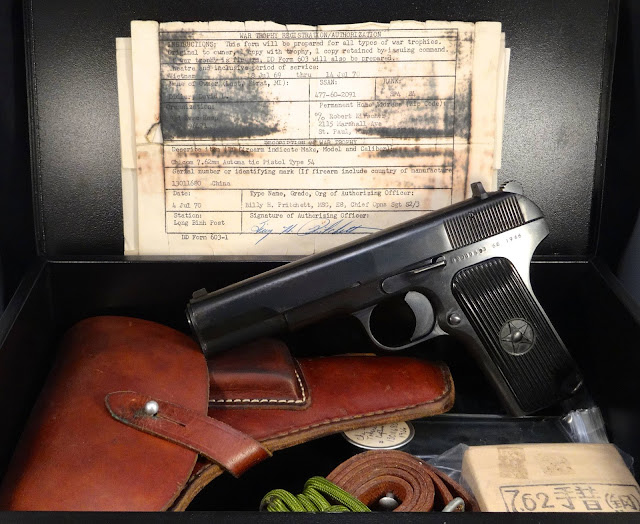 Whilst perusing the offerings of Arnzen Arms in Eden Prairie, MN I could see a large box with a pistol sticking out of it sitting on the shelf of their used handgun case towards the rear of their handgun showroom.  When I went back for a further look I found that the box contained the pistol, holster, strap, box of ammo and the paperwork required to bring home a "war trophy". 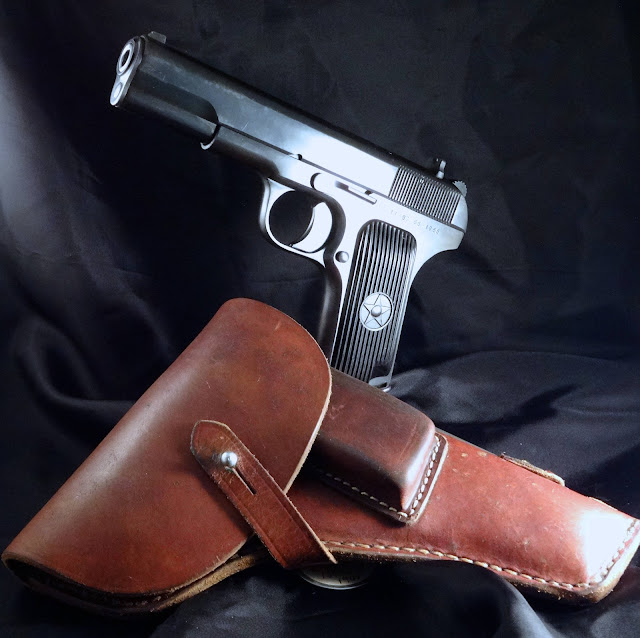 For those that do not know, the Tokarev is the pistol that replaced the Nagant revolver as the official sidearm of the Russian military back in the early 1930's. What has intrigued me about this pistol is that the Russians were enamored of the John M. Browning designs for Colt and FN of Belgium. The Russians strived to produce the pistol with the appearance and ergonomics of the Browning's pistols but in a more potent combat caliber than the .25, .32 and .380 ACP cartridges that made up the bulk of Browning's pistol offerings.  While looking for the appearance and quality of Browning's designs they also had the necessity to make it simple and less expensive.

The Tokarev is chambered for the 7.62X25mm cartridge 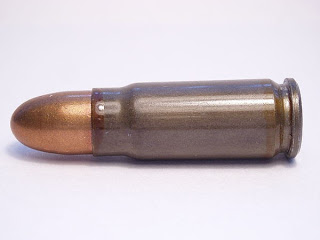 which has a lot more pep than the round fired by the Nagant revolver. The Tokarev 7.62X25mm pistols pushes the Wolf 85 grain FMJ bullet out the muzzle at 1641 feet per second with 560 foot pounds of energy. Wolf also makes an 85 grain jacketed hollowpoint round which moves at 1592 feet per second with 527 foot pounds of energy  Both of these loads are faster and produce more muzzle energy than any 9mm bullet and starts to put it on par with some of the +P .45 ACP and .357 Magnum offerings. Wolf ammunition makes a hollow point cartridge marketed in their Gold line of ammo. This is not a round to be trifled with.

The Soviet Union ceased production of the Tokarev in 1954 when it adopted the Makarov pistol. However the Tokarev continued to be produced in other communist countries, most notably by China whose People’s Liberation Army’s state weapons manufacturer, Norinco continues to produce them today. The specimen on the shelf at Arnzen is of Chinese origin. 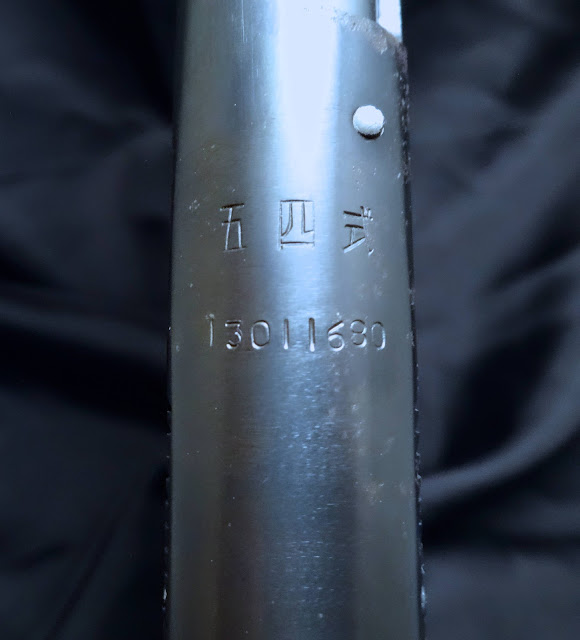 To be honest, I rather like the Tokarev design. It is rugged, fairly flat and thin (It is .83 inches wide as compared to the U.S. 1911 which is .92 inches wide), the fixed sights, which are rather rudimentary, provide an acceptable sight picture and the single action trigger pull is usually pretty good. One common complaint is the fairly straight grip which was remedied by the Egyptian military who employed a wrap around, curved plastic grips.  If you buy a Tokarev to shoot you may want to look into some better grips from Marschal Grips (http://www.marschalgrips.com).  They produce high quality wood grips and make the wrap around Egyptian style as well others shown below: 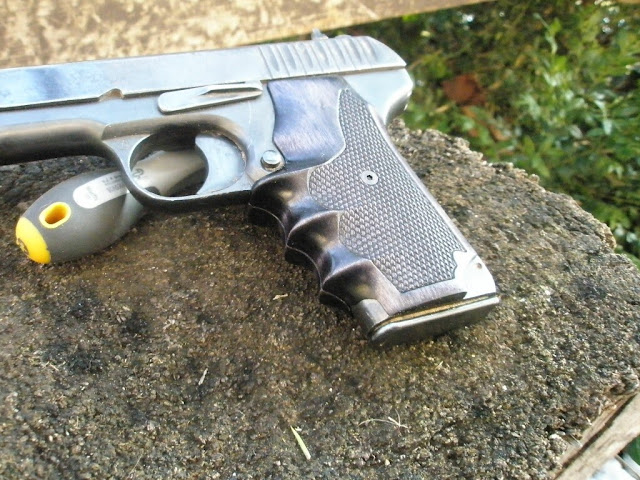 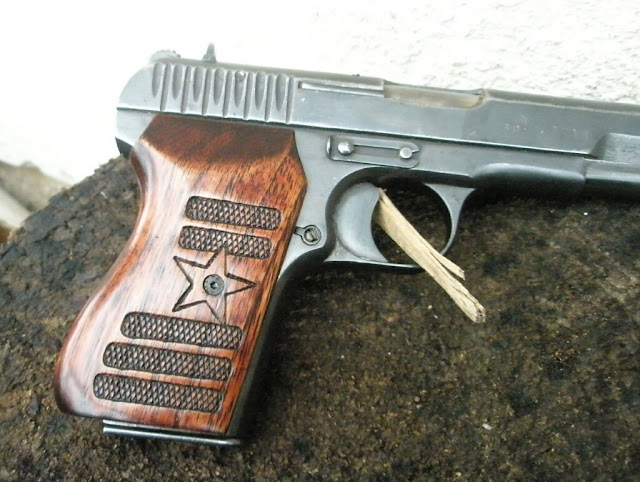 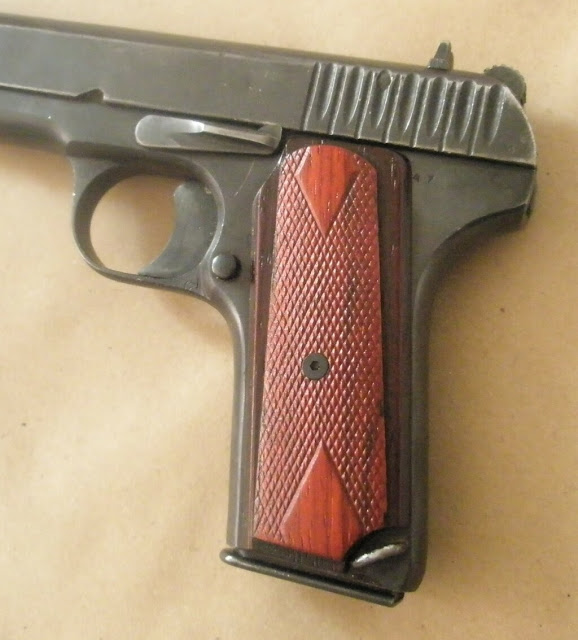 Getting back to the Specimen at Arnzen Arms, this pistol was uncovered in a sealed tin when the U.S. Army raided an NVA weapons cache. 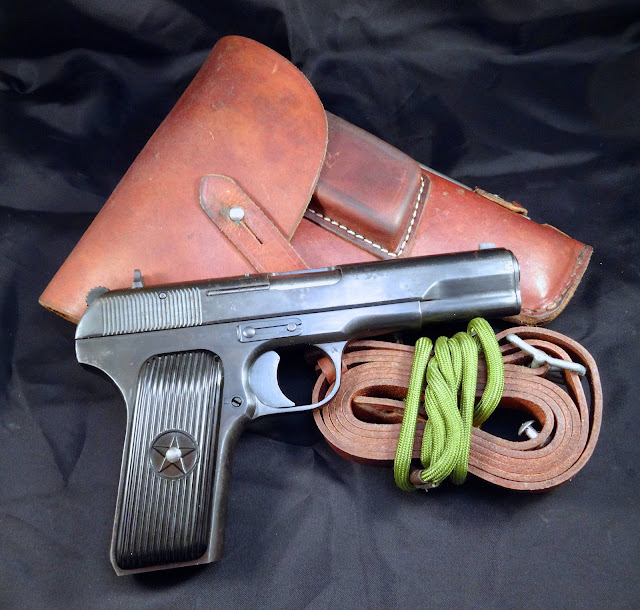 The sealed tin contained two new condition Chinese copies of the Tokarev.  The tin was discovered by a U.S. Army Medic serving with the 93rd Evac Hospital in Long Binh.  The medic kept this specimen and another soldier took possession of the other pistol.  In April of 1970 the DD 603-1 "War Trophy Registration/Authorization" form was completed and approved. 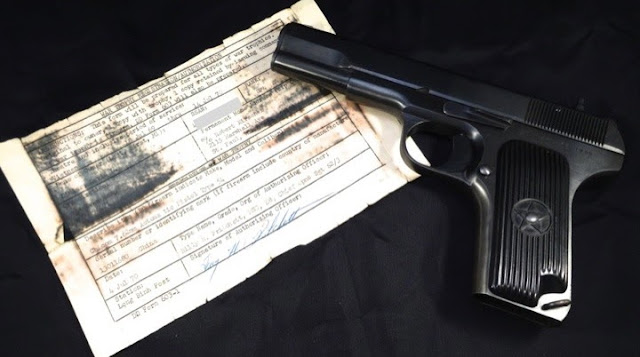 The pistol was then shipped to St. Paul presumably to a friend or relative of the Army Medic.  I cannot find any information on the Medic who sent the pistol home but I did discover that the man who signed off on the form DD 603-1, MSG. Billy H. Pritchett, died on active duty in 1974 after a 22 year career in the U.S. Army.

If you are interested in this pistol it is, as of today, still on the shelf at Arnzen Arms.  You can contact them at arnzenarms.com or at 952.944.1875. 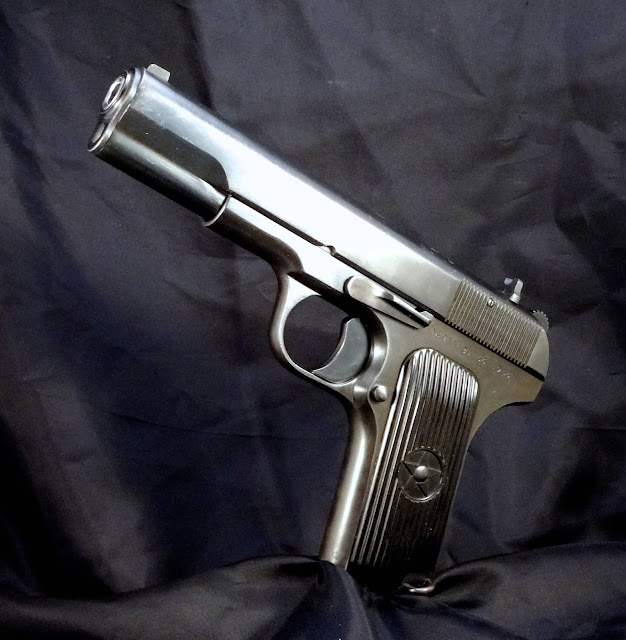 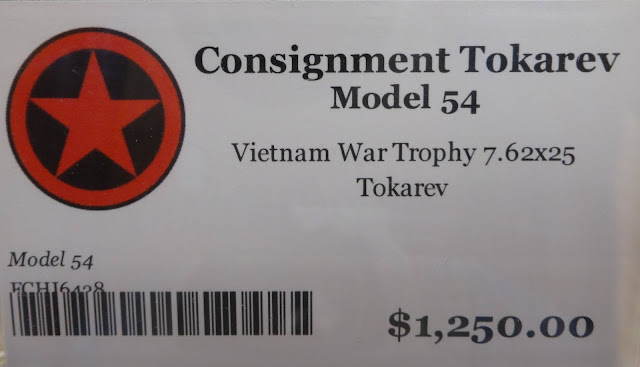 It is a little pricey, but you are not just buying the pistol; you are buying all the accouterments that accompany it and the historical story.

Arnzen Arms (www.arnzenarms.com or 952.944.1875) is located in Eden Prairie, MN and is a welcome addition to the local firearm retailing community.  It is a bright store staffed with knowledgeable employees and stocked with quality firearms.  Now I don't mean that they only carry uber-expensive custom 1911's, although there is an Ed Brown model or two in inventory.  When I say quality I am referring to the quality of the maker and their manufacturing process.  Their inventory ranges from value priced firearms up to the higher-end handguns, rifles and shotguns.  Regardless of how much the customer spends they will leave the store with a weapon made by a reputable company.  The cheaply made firearm does not have a place at Arnzen.  If you are in the Eden Prairie area stop by and tell 'em Average Joe sent you.

I have the pistol, holster, belt and paper work. I got mine in a firefight while serving with the 1st Infantry Division on May 25th, 1969. I carried it in the field and went into m=numerous tunnels and fired it many times in combat. Nice to see a great write up of this not so common war trophy. Thanks

Thank you for your service to our country during those difficult times. I am glad that your "War Trophy" helped you get home safely.

BEAUTIFUL photography, AJ! Can you share some of your secrets? Are you using a soft box?

:) Amazing. I wish I could spare this money now. A lot of history behind it. I've seen some of the average edition of this pistols as surplus for sale at Buds and classic firearms. Price ranges from 220 to 250. Great pictures and info. I wasn't able to listen the podcast last night. Gonna do it during my lunch break.